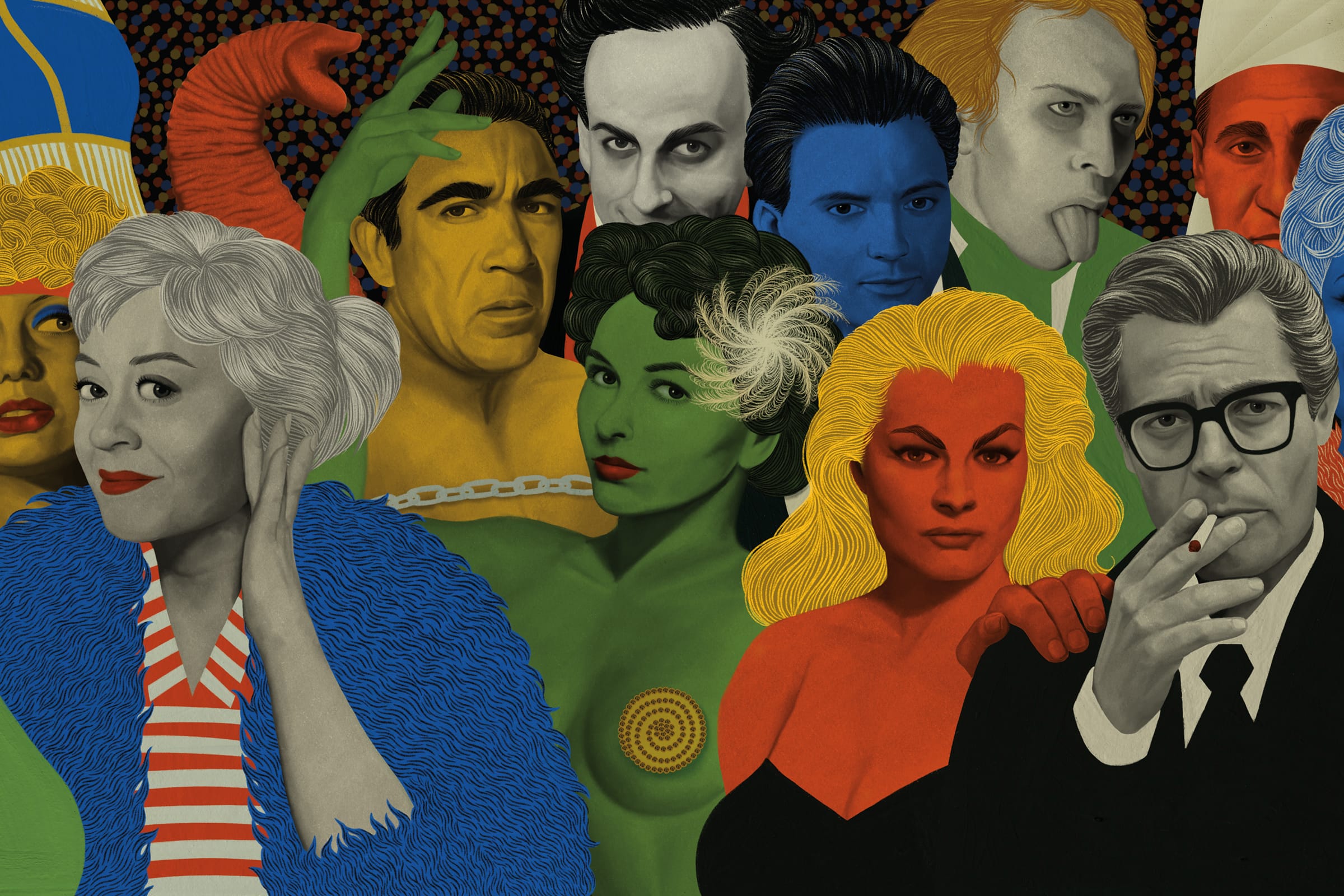 Though there are a handful of themes and images that recur throughout his work, Federico Fellini’s style underwent a drastic change at the cusp of the 1960s, shifting from the predominant neorealist aesthetic to a heady, surrealistic brew of “memories, dreams, and reflections” (to quote the title of Carl Jung’s partially autobiographical book, which Fellini greatly admired). The Criterion Collection’s lavish Essential Fellini box set just about evenly splits the difference between the two periods. The set contains 14 of Federico Fellini’s films, from his 1950 debut, Variety Lights, co-directed with Alberto Lattuada, to 1987’s Intervista, a fascinatingly recursive paean to the golden days of studio filmmaking that wasn’t his swan song (he would go on to make The Voice of the Moon in 1990).

With its tale of a peripatetic band of low-rent theater types, Variety Lights incorporates many, if not most, of Fellini’s signature themes. La Strada, from 1954, takes the light-hearted comedy of the earlier film into a starker, more existentially tragic direction. By the ‘60s and into the ‘70s, the promise of the open road has curdled into an impasse: Witness the famous traffic jam that opens 1963’s 8½, which is in turn echoed in the openings scene of 1972’s Roma. About idle youth in rural Italy, and a recounting of Fellini’s own departure for Rome at the age of 18, I Vitelloni establishes the vein of nostalgia that runs throughout many of the Italian auteur’s later works, though here it’s a bit more clear-eyed and unsentimental.

The specter of self-destruction haunts Fellini’s work throughout the ‘50s and ‘60s. Giulietta Masina’s character in both La Strada and 1957’s Nights of Cabiria loses all will to live due to the brutality and indifference of the men in her life. In 1965’s Juliet of the Spirits, it’s the knowledge of her husband’s infidelity and the memory of a classmate’s suicide that brings Masina’s characters, named Giulietta, to the brink of oblivion. Which isn’t to say that Fellini’s male characters aren’t similarly haunted: For one, Marcello Mastroianni’s Guido in 8½, feeling creatively bankrupt, comes close to turning a gun on himself. In fact, Fellini at the last minute changed out the original ending, which hinted more strongly that Guido had actually gone through with the act, for the comparatively celebratory, if still ambiguous, one we now have.

Given the darkness at the heart of these works, it’s hardly surprising that Fellini flirted at times with the horror genre, a trend that culminated in Toby Dammit, his contribution to 1968’s Poe-themed anthology film Spirits of the Dead. In La Dolce Vita, from 1960, Marcello (Mastroianni) attends a séance at a remote villa, then participates in a tenebrous ghost hunt around its grounds, an extended sequence that Fellini imbues with a suitably gothic atmosphere. Juliet of the Spirits includes fantasy sequences featuring a blond-haired demon child and a group of sexually uninhibited women who may or may not be vampires. In Toby Dammit, the devil is another towheaded girl (an image Fellini may have lifted straight from Mario Bava’s Kill, Baby…Kill!) who lures Toby (Terence Stamp) to his doom.

In his later films, Fellini inclined toward nostalgia or abstraction, sometimes both, while remaining grounded to a certain extent by the bawdy, earthy humor that he learned during his apprentice days writing scripts in the commedia all’italiana vein. Roma takes the episodic nature of the Felliniesque road movie to its logical conclusion, eschewing even the slight connective tissue of the recurring characters who hold together an otherwise fragmented, Brechtian work like 1969’s Fellini Satyricon, his free adaptation of a first-century novel by Roman courtier Petronius. Set in the 1930s, 1973’s Amarcord is a record of one year in the life of a coastal city, much like the Rimini of Fellini’s youth, free associatively combining the director’s boyhood memories with the daily life of a childhood friend. And the Ship Sailed On, from 1983, is a study in art and artificiality, ending with that arch cinematic sleight of hand: the pulling of the camera back to reveal the very process of its own creation.

Though not Fellini’s final film, Intervista can stand as a capstone to his career. The film’s multiple layers include a depiction of Fellini’s first visit to the Cinecittá Studios in Rome in 1940, his attempt to direct an adaptation of Franz Kafka’s Amerika, and an interview with Fellini by a Japanese television crew that encompasses a tour of the studio’s present-day facilities. Here, Fellini effortlessly weaves together various registers, aesthetic and otherwise, continually undercutting whatever level of “reality” seems to be in front of the camera(s) at any given time. Far from coming across as pretentious, it’s all done with a wry humor, thus serving not only as an ideal valedictory for one of cinema’s greatest directors, but also as the perfect film to close out Criterion’s collection of his essential films.

Eleven of the films in Essential Fellini are presented in new 4K restorations (the others are sourced from recent Blu-ray releases of individual films). In addition, there are new digital restorations of the short film Toby Dammit and the made-for-TV Fellini: A Director’s Notebook. Across the board, the transfers look superb. The early black-and-white films present gorgeous high-contrast images with deeply compressed blacks. The color films are truly eye-popping, especially Juliet of the Spirits, some of whose Technicolor imagery seems to prefigure the candy-colored nightmares of Dario Argento’s Suspiria. The Italian LPCM mono tracks are uniformly first-rate, presenting dialogue clearly and cleanly, and giving plenty of presence to frequent Fellini composer Nino Rota’s elegant, often carnivalesque scores.

The films included in Essential Fellini come packaged in a gorgeously decorated case whose front lifts off like a deluxe LP box set. The 15 discs, including one devoted to the 193-minute cut of the documentary Marcello Mastroianni: I Remember, are housed in a flipbook that suggests a photo album. Beneath that, two books nestle in their own pigeonholes: a lavishly illustrated guide to the films, complete with lists of extras and information on the restorations, and a thick (and thickly illustrated) book of essays from filmmakers and film critics.

Notable among the set’s wealth of extras are six commentary tracks, an appreciative documentary about Fellini’s wife and frequent collaborator, Giulietta Masina, and archival interviews with a number of actors who worked on more than one Fellini film, including Marcello Mastroianni, Sandra Milo, and Anouk Aimée. Damian Pettigrew’s feature-length documentary Fellini: I’m a Born Liar from 2002 is an excellent place to start, as it not only provides a career-spanning over of Fellini’s life and career but is also based on his last confessions and includes recollections from Donald Sutherland and Terence Stamp. (Speaking of Stamp, there’s a newly restored version of Toby Dammit to be found on the Juliet of the Spirits disc.) Also of note is a four-part interview with Fellini from 1960 that’s spread across four discs, as well as four hour-long behind-the-scenes documentaries and a retrospective that features a number of late-life interviews with Fellini looking back over his career.

Essential Fellini is one of the most elegantly designed and supplement-packed sets that the Criterion Collection has ever released.