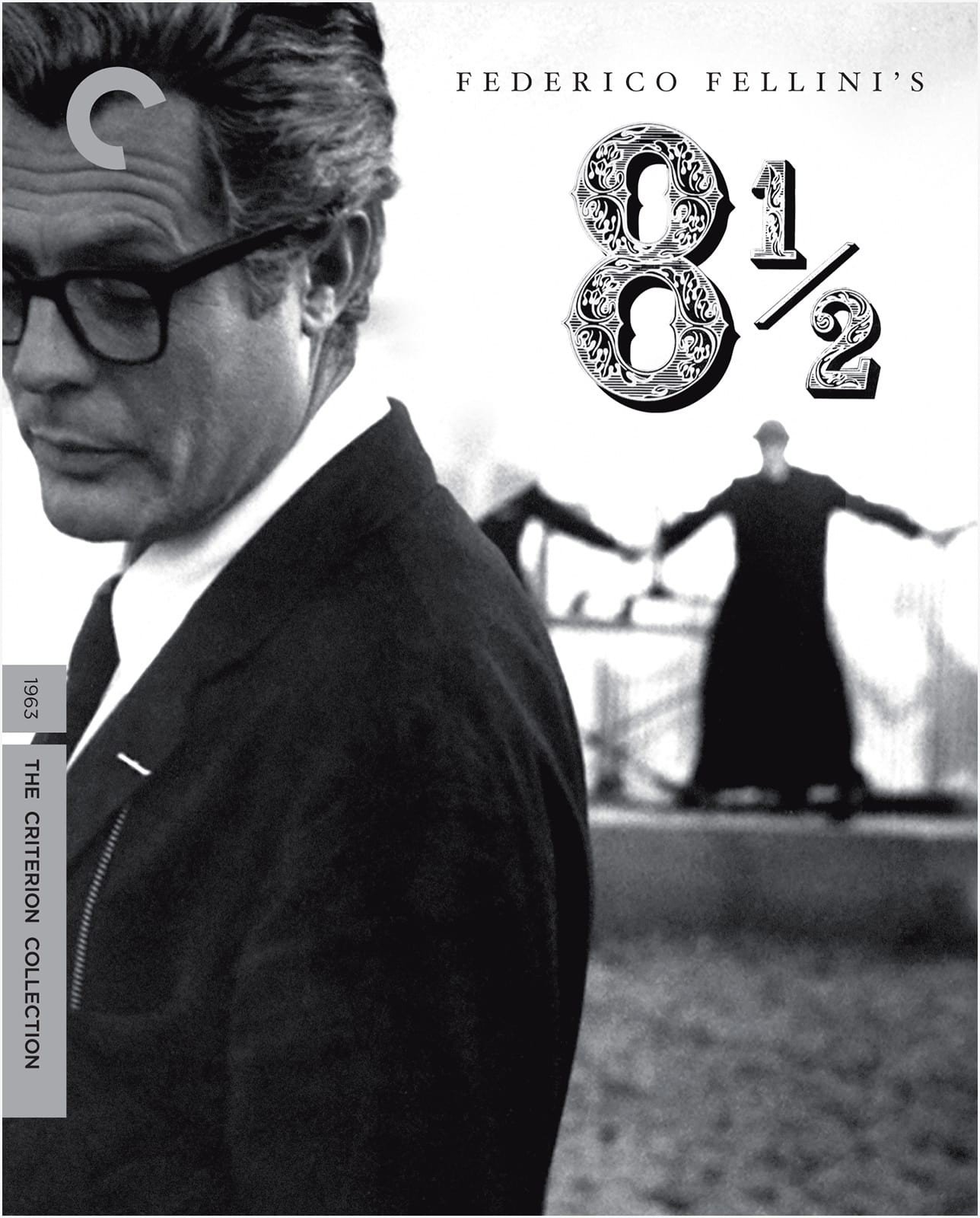 Although the extent to which the iconically dark-shaded and silver-streaked Guido Anselmi (Marcello Mastroianni) can truly be accepted as a Fellini surrogate is a source of endlessly inconsequential debate, we tend to take the lightly fictive director at his word when he dismally claims that he had planned to make a truly honest and direct film this time around. 8½ represents the most unceremonious and abrupt transition in the development of Fellini’s cinema from putatively neorealist ideologies to unabashedly oneiric claptraps about the onus of an overly imaginative but waning masculinity—and it is, for all its Freudian bitchery and post-libidinous angst, one of the few personal statements in film utterly unhindered by stretches for social or cosmic relevance. There are some aphoristic generalizations related to living the creative life, most of them articulated by Guidio’s lean script advisor and logos personification Daumier (Jean Rougeul)—“Destroying is better than creating when we’re not creating those few, truly necessary things”—but unlike the allegorical potency of La Dolce Vita, which rendered Rome with Olympian hedonism and Dante-esque judgment, the symbolism of 8½ maroons us in the faux-comic salt flats of Guido’s muddily incommunicable psyche without an archetypal compass.

What’s more intriguing than the biographical foci at which Guido and Federico intersect—they share the same buxom mistress, for example, and the residue of an unfinished film project upon which the desultory plot haphazardly sprouts—is the manner in which the latter director seemingly structures the film career of the former as a dense, wiry extension of their collective psychic apparatus. There’s no clean way to boil the characters of 8½ down to their psychoanalytical essence; Guido’s fleshy superego of a producer (Guido Alberti), strolling meatily through the studios, locations, and galas like a harried Ghost of Christmas Present, asserts the need for financial success against the homunculus Daumier’s thick-veined and equally ego-driven screenplay dissection, but even their grim warnings of filmic failure are meant to remind Guido not of his temperamentally adulating public, but of his pervasive impotence. And Fellini fails to make a truly meta-movie with 8½ (even though every arcing camera pan and slithering truck shot is deeply and even funnily self-conscious, cinema is best understood here as a cognitive analogy rather than an as a self-reflection), but he unwaveringly embraces cinema as a cavernous expression of the panicked id. It’s as though in the face of creative crisis the director took the self-empowering advice from his own early oeuvre, especially the tearjerking egotism of La Strada and the recalcitrant élan of Nights of Cabiria.

Still, 8½ works best as a self-deprecating comedy, a fact revealed most forcefully in the folly of film production on display and its parallels to sex (Guido’s erect but useless rocket towers are vacant, ominous totems sneering at the director’s coitus non-existus, while the puckish frittering of the non-plot has an “Oh, what fools these cast and crew be” glee) and Fellini makes it clear that his protagonist/stand-in’s humiliation is a self-imposed mechanism, an indelible fantasy meant to excuse away the approaching silence between Guido’s legs after years of animated sexism. Guido’s arguments with deep, dark wife Luisa (Anouk Aimée) and the swollen-chested, angular-faced Carla (Sandra Milo) are his only genuine opportunities for intimacy, a pathetic fact underscored by sexless late-night discussions with beatific female lead Claudia (Claudia Cardinale) and the degeneration of a toga-laden harem daydream into patricidal pandemonium. Due to Guido’s utter lack of virulence (even after his cathartic self-gunning and resurrection his instinct is to semi-gracefully accept defeat), 8½ ultimately belongs to its torrid community of feminine conquests—an interpretation certainly favored by those at the helm of the musical adaptation Nine. Fellini’s hyperrealism, for all its poetry, has never been much of a challenge for a fair pair of mammary glands and a fiery temper.

The hi-def experience begins rather inauspiciously: The film’s infamous traffic jam and human-kite opening doesn’t quite feel as starkly lysergic as it should due to some frosty film grain, and we’re prepared for disappointment. Luckily, as soon as the movie succumbs to Gianni Di Venanzo’s textural chiaroscuro the reasons for 1080p are powerfully pellucid. Guido’s slick, graying mop sparkles with layered detail whenever lit from behind; seeing his crisp, pewter-y cap in hi-def is a bit like peering at a constellation through a telescope rather than gleaning the gist with the naked eye. Like La Dolce Vita, most of the key sequences in 8½ are bathed in darkness with geometrically illuminating lines and angles adding sharp contrast, and the Blu-ray’s sheer cleanliness makes wandering around in Guido’s tortured psyche a far more tactile expedition. The resolution also proves more intensely that Fellini knew flesh: The sterile film critic’s tumescent forehead vein, the decadent corpulence of the dancing prostitute, and the soft, powdery face of Anouk Aimée are all the more vividly sexualized. The clear monoaural sound presents Fellini’s celebrated dubbing technique-the out-of-synch nature of which provides an ineffably otherworldly quality-as well as it can.

Most of the supplements here are carry-overs from the original standard def DVD released in the early aughts, and few of them have been bumped up to 1080p. One wonderful exception is the autobiographical short Fellini: A Director’s Notebook, quite possibly the most undiluted attempt to assert the fastidious “Fellini” persona via purportedly un-fabricated scenarios (the director’s scrapping with Mastroianni over a prospective role may provide clues as to their rapport, or lack thereof, on the set of 8½). There’s also a new documentary on the original ending of the film, which was eventually re-appropriated for City of Women, featuring copious stills and interviews; none, however, are likely to mourn the denouement’s round-filing in light of the dramatis personae circus with which Fellini chose to close the film. The audio commentary with Gideon Bachmann and Antonio Monda is generally informative but not essential, as are the production stills and interviews with devotees (Vittorio Storaro, Terry Gilliam, Lina Wertmüller). The booklet contains a few notes by Fellini and an essay by Alexander Sesonske, but it’s missing Dwight MacDonald’s definitive 8½ appreciation, “Fellini’s Masterpiece.”

It’s still not much more than a smirk-provoking, Oulipian ode to the thicket of middle-aged sexuality, but on Blu-ray the thicket appears far more paean-worthy.