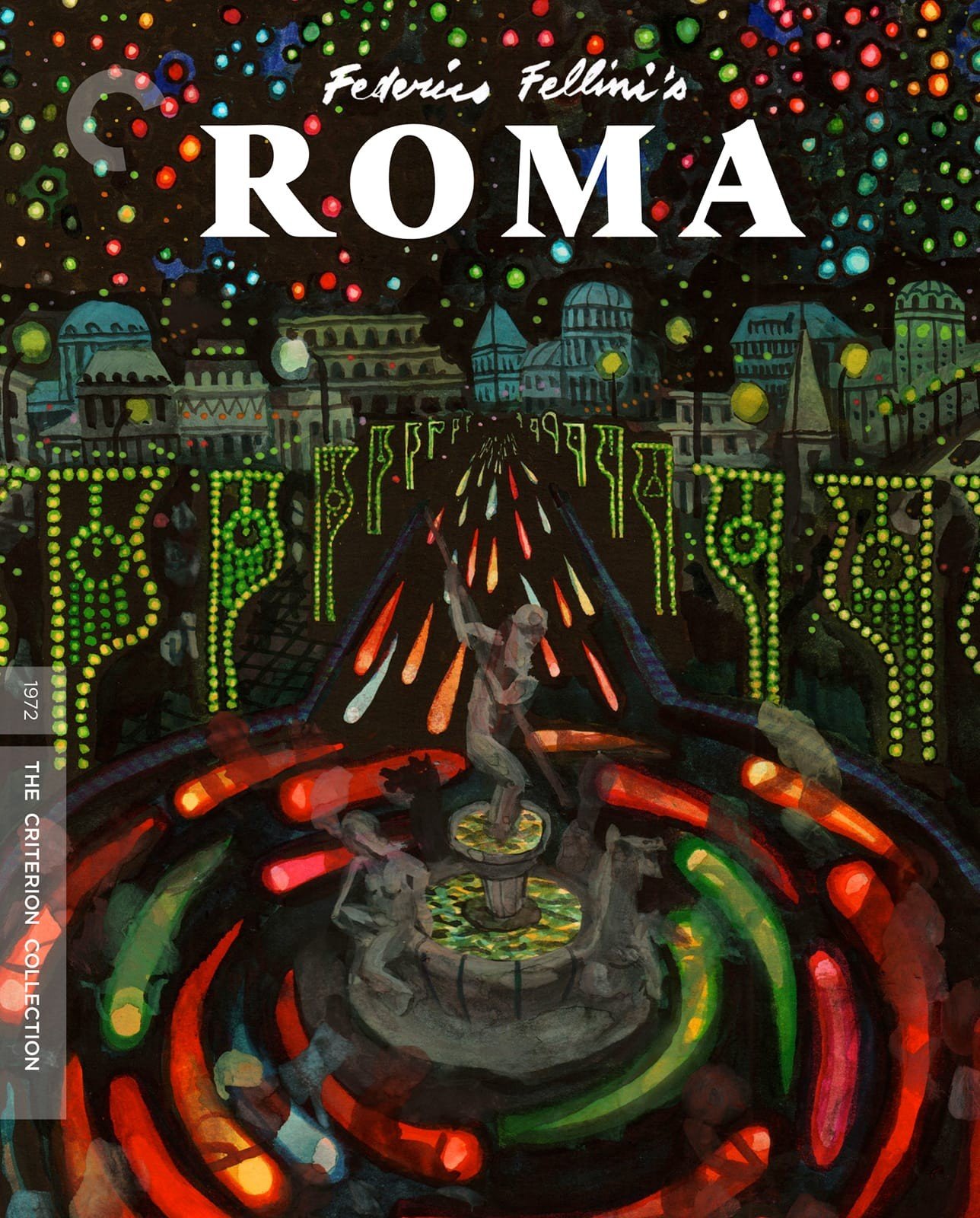 A phantasmagoria of time and place, Federico Fellini’s Roma keeps unpredictably shifting narrative modes—at turns invoking fictionalized autobiography and documentary realism that’s been painstakingly recreated on a studio soundstage—to convey the ultimate impossibility of ever objectively or even accurately capturing reality on film. Roma is thus fittingly full of narrative dead ends, threads left provocatively dangling. Only through these elaborate and enigmatic artifices can Fellini begin to represent the adoptive “mother city” that suckled, like the mythical she-wolf once did Romulus and Remus, his creative ambitions.

Just such an image of the she-wolf turns up early in the film, alongside other representations of Rome’s monumental splendor, during a slideshow lecture meant to fire the rural students’ ardor for their capital. Of course, this being a Fellini film, propagandistic proprieties are cheekily interrupted when one of the slides reveals a scantily clad lady with her back to the camera. More than simple titillation, though, this visual motif recurs through: If the equation of woman and the city holds true for Fellini, then the woman’s turned back underscores her inscrutable unavailability for the camera’s prying eye.

Like Akira Kurosawa’s Dreams, Roma employs a number of directorial surrogates: a boy in the early provincial sequences; the handsome young man (Peter Gonzales) who arrives in Rome in the late 1930s; even the director turns up to play himself directing a film that may or may not be Roma. But the film is more Borgesian in its spirited gamesmanship. None of the surrogates are explicitly identified as Fellini. The narration isn’t from Fellini but the voice of a renowned impersonator. Details of apparent autobiography don’t gibe with Fellini’s actual life history. And, perhaps most radically, there are time when the Fellini substitute drops out altogether (like the protagonist in Gravity’s Rainbow) and the spectacle of pure cinema takes over.

Fellini’s emphasis on spectacle is never more evident than in the ecclesiastical fashion show, arguably the film’s most infamous vignette. Elderly Princess Domitilla (Pia De Doses) laments the decline in power and prestige of the Catholic Church’s “black aristocracy,” while increasingly outré haute couture for today’s clergy parade by—as, for instance, priests on roller skates that make “rushing toward paradise” all the easier. Events culminate with the resplendent apparition of the pope, goldenly refulgent and reducing everyone in the audience to abject awe. Fellini’s satire here escalates from slyly Buñuelian to coldly critical, since the specific pope being mocked wasn’t the current Vatican resident, but rather Pius XII, whose role in denying evidence of the Holocaust during and after WWII remains controversial.

This segment highlights Fellini’s oblique approach to politics. During one of his on-screen appearances, Fellini is accosted by a group of student radicals who inquire whether the film he’s directing will be sufficiently objective and engaged. The director coyly responds, “I have to do what’s in my nature,” but that isn’t to say that Roma’s political content is exactly nil. Instead, critique is often couched in history, wartime fascism serving as a flexible metaphor for contemporary terrorism and revolt. Present-day examples of hippie “free love” engender the narrator’s reflection on an earlier generation’s repressed sexuality, evolving into an extended disquisition on brothels that cater to different economic brackets. The one exception to Fellini’s refractive handing of politics occurs late in the film, when the local gendarmes descend on a peaceful “One Love” protest during a local festival, lashing out with their truncheons without the slightest provocation. Regardless of partisan correctness, Fellini obviously abhors cruelty and violence of any stripe.

Whatever its political inclinations, Roma is a prime example of what the late Umberto Eco called an open work, where the connections between the individual parts, as well as any overarching meanings to be gleaned therefrom, are respectfully left to the discretion of the viewer. Roma is also teasingly littered with references to Fellini’s earlier works, self-reflexive glosses that are often underlined by Nino Rota’s score quoting from the film in question. Some of these allusions are glaringly obvious, like the frescoes discovered while excavating a subway line that point back to Fellini Satyricon. Others are almost lost in the background detail, such as a little girl chasing a white ball across the grounds of the Villa Borghese, a clever nod to “Toby Dammit,” Fellini’s contribution to the anthology film Spirits of the Dead.

Frank Burke’s informative, if somewhat academic, commentary track provides a persuasive reading of Roma, and lays out its myriad connections to other Fellini films. The deleted scenes are little more than snippets trimmed from extant scenes, most notable among them self-deprecating cameos from Marcello Mastroianni and Alberto Sordi that were excised from the Festa de Noantri sequence. In an interview with critic Antonio Monda, filmmaker Paolo Sorrentino discusses Fellini’s specific influences on his own work, how they both depict an outsider’s perspective on Rome, and how he admires Fellini’s blend of creative freedom and technical expertise.

Monda also talks to author Valerio Magrelli about his friendship with Fellini, which began when Magrelli served as “assistant to the assistant coffee boy” on Fellini’s Casanova, then blossomed when Fellini called him up to ask about his recently published volume of poetry. Magrelli goes on to describe Fellini’s work—and this applies particularly well to Roma—as a distinctive combination of the visual (descriptive and documentary qualities) and the visionary (spiritual and philosophical qualities). Images from Don Young’s archive of Felliniana and the MGM press book are reproduced in a slideshow accompanied by excerpts from Nino Rota’s score. The foldout insert has an enlightening essay by David Forgacs on one side and a neon-bright image plucked from the clerical fashion show on the other.

Federico Fellini’s hallucinatory Roma gets a pristine 2k transfer and a few meaty bonus features from the Criterion Collection.

Review: William Friedkin’s To Live and Die in L.A. on Shout! Factory Blu-ray