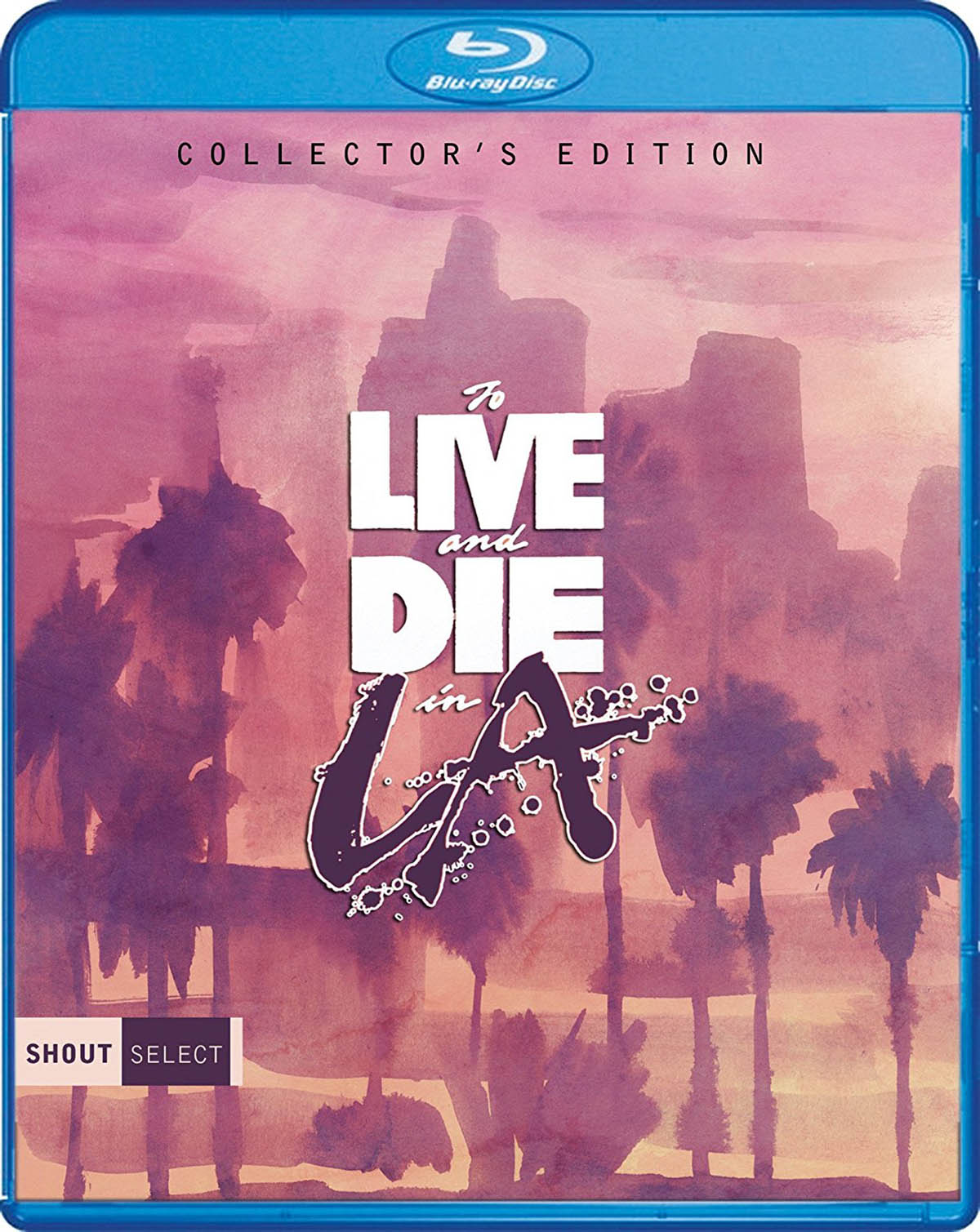 When you think of 1980s action movies, visions of steroidal juggernauts like Schwarzenegger and Stallone are likely to spring to mind, but there was always another, if less numerous, stream running through their midst: gritty, downbeat, and cynical films typically helmed by New Hollywood stalwarts whose careers were in various stages of diminution. Among them were Hal Ashby’s strident, coke-fueled 8 Million Ways to Die, John Frankenheimer’s seamy extortion saga 52 Pickup, and William Friedkin’s To Live and Die in L.A., a neon-hued noir reworking of the morally ambiguous cops-versus-criminals terrain he had staked out a decade earlier in The French Connection.

Like Friedkin’s earlier film, To Live and Die in L.A. cannily blends quasi-documentary procedural realism with an unpredictable modernist sensibility. The story is succinct in its pulpy purity: loose-cannon Secret Service agent Chance (William Petersen) vows to take down elusive counterfeiter Rick Masters (Willem Dafoe), no matter the cost, when Masters kills his partner. But the method of its telling zigzags into unexpected tangents and bravura set pieces. The film’s emphasis on aesthetics is also embodied in its characters: Masters is a painter of some repute—even if he’s prone to setting his canvases ablaze—and an avid supporter of modern dance. After smacking an informant across the face with a piece of indigenous statuary, Masters takes him out with the memorable line, “Your taste is in your ass.”

Counterfeiting stands as an overarching metaphor for human interactions. The film offers a Hobbesian nightmare vision of existence as “nasty, brutish, and short,” where human worth is nothing more than an exchange value on the open market, and the currency in circulation is utterly bogus. There’s a feedback loop of mutual exploitation at work: Chance uses Ruth (Darlanne Fluegel) for sex as well as to glean inside information; she feeds him leads to keep out of jail. Imprisoned “play-dough” mule Carl Cody (John Turturro) offers to rat out Masters, only to turn on Chance with abrupt violence. And posh downtown lawyer Bob Grimes (Dean Stockwell) advises Masters and Chance’s partner, Vukovich (John Pankow), with equal impassivity.

Friedkin indulges an intriguing stylistic fillip throughout: a briefly interpolated shot illustrates what a character’s thinking at the moment. It’s a purely visual correlative to the voiceover narration often found in classic noirs. Here the technique is often used for ironic counterpoint, as when Chance and Vukovich flee an ill-advised shakedown gone terribly awry. Vukovich is haunted by the fatal upshot of his actions, whereas Chance merely mulls over an earlier bungee-jumping incident. For this unflappable adrenaline junky, there’s no discernible difference between the two events. As with his handling of Ruth, callous only begins to describe Chance’s attitude. Symptomatic of Friedkin’s filmmaking philosophy, his protagonists are complex, flawed, and often downright unlikable, however charismatic they may appear on the surface.

To Live and Die in L.A. exhibits a remarkable degree of kineticism, evident in several memorable chase sequences, the film’s headlong momentum abetted by Wang Chung’s dynamic score. The foot race through LAX Airport is a master class in action revealing character: Chance leaps over rows of chairs, and careens along the divider between the moving sidewalks, with complete disdain for the consequences. But the film’s real showstopper is a car chase explicitly intended to top even the elevated subway pursuit from The French Connection. The scene a remarkable example of impact achieved via painstaking choreography and editing: Chance and Vukovich tear through industrial neighborhoods, along the paved-over L.A. riverbed, before finally entering the Terminal Island Freeway going the wrong way.

The finale doubles down on the palpable pessimism of The French Connection. Where Popeye accidentally kills another officer in his monomaniacal pursuit of the drug kingpin “Frog One,” who nonetheless ultimately eludes capture, Chance actively pursues his own annihilation out of sheer hubris and contemptuous disregard for the rules. Like his double and shadow, Masters also opts for destruction rather than surrender. The circle closes viciously when Vukovich assumes the persona of a second Chance, informing Ruth with cold calculation, “You work for me now.” In one last mental flash, Ruth envisions Chance pulling up to her house in his battered pickup. The film’s despairing conclusion seems to be that nothing ever really changes, and human relations are only good for what you can wring out of them.

Robby Müller’s cinematography is one of To Live and Die in L.A.’s greatest assets, whether capturing William Friedkin’s rough-and-ready action sequences or more stylish flourishes like the garish red-and-green lighting in the strip club where Ruth works. Shout! Factory’s 4K transfer shows marked improvement over MGM’s 2009 Blu-ray release, which had some issues with fine details and black levels. Color saturation and image clarity are well rendered, though grain levels tend to intensify and abate pretty unpredictably. The surround mix handles channel separation well, lending some depth to ambient effects; both the 5.1 and the two-channel track put Wang Chung’s high-energy electronic score front and center.

Shout! Factory’s Blu-ray of To Live and Die in L.A. is notable for its slate of new interviews. William Petersen recalls getting his role, improvising most of the scenes, and shooting the foot chase through LAX Airport. Stunt coordinator Buddy Joe Hooker discusses being recruited by producers to work on the film, how this led to collaborate with Friedkin over his next seven films, what his duties on the set entailed, and goes into the notorious wrong-way car chase at some length. Composers Jack Hues and Nick Feldman of Wang Chung relate how Friedkin asked them to score the film based on his use of “Wait” on the temp track, writing the title song against Friedkin’s express instructions, and their impressions of the film itself. Actor Dwier Brown recalls improvising the audition, his association with the Chicago school of acting exemplified by leads Petersen and Pankow, and how his “calling card” role had a cumulative effect on his career. Actress Debra Feuer talks about having chemistry with Willem Dafoe, how her character was originally written as a mulatto, playing the flute for Friedkin, and bringing her own wardrobe to the set.

The other extras have been ported over from the 2003 DVD. Friedkin’s articulate, opinionated commentary track comes in discrete bursts more or less in sequence with the film. The filmmaker talks about connecting with the surreal existence of the Secret Service agent in the source material, how the film’s authentic depiction of counterfeiting almost got him in trouble with the law, casting the film with then-unknown actors, and his preference for cinematic irony and unpredictability. The archival making-of documentary “Counterfeit World” has some great behind-the-scenes footage, not to mention the welcome involvement of Dafoe, Darlanne Fluegel, and Gerald Petievich, author of the source novel and co-screenwriter. The deleted-scene and alternate ending featurette has onscreen commentary from Friedkin, Petersen, and editor Bud Smith. The deleted scene would’ve fleshed out Vucovich’s character a bit more, but it also would’ve ground the intensifying third-act action to a halt. The studio-mandated alternate ending is a real howler: Chance survives a shotgun blast to the midriff, only to find himself and Vucovich reassigned to a shit detail in Alaska.

William Friedkin’s neon-hued noir To Live and Die in L.A. gets a vibrant 4K transfer and a slate of solid new extras from Shout! Factory.