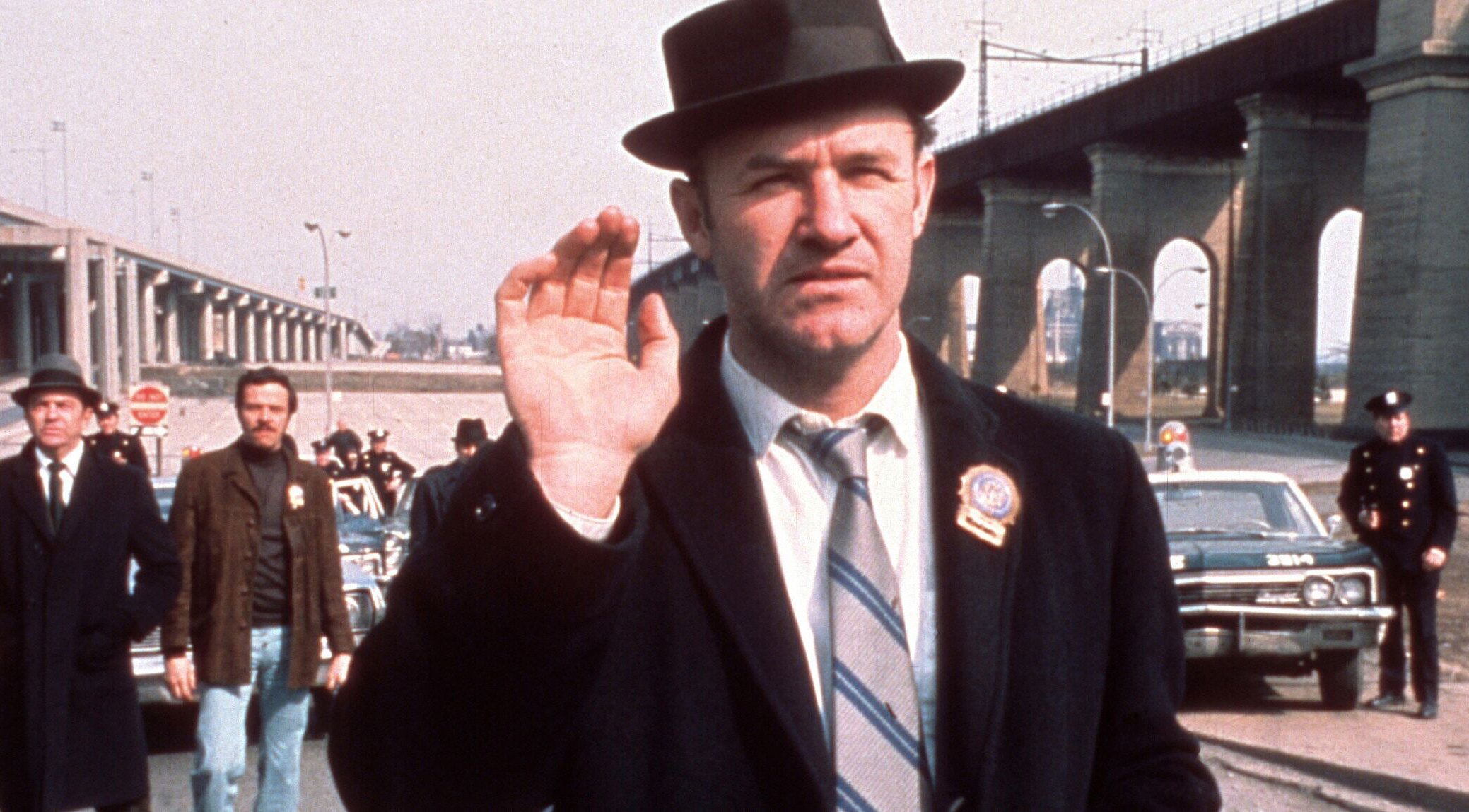 Four decades after its initial release, William Friedkin’s Oscar-sweeper The French Connection remains an electrifying achievement, drawing its high-voltage forward momentum from the collision of semi-documentary procedural, with its based-on-real-events verisimilitude, and downbeat rogue-cop revisionism. Shooting in actual locations wherever possible, and availing themselves of the featherweight handheld cameras that enabled the development of the Direct Cinema movement, Friedkin and cinematographer Owen Roizman put the grit into “gritty authenticity.” But that’s only half the equation. Ernest Tidyman’s script tweaks buddy-cop stereotypes by compelling the audience to identify with a bigoted and obsessive loose cannon whose actions grow increasingly questionable, and subverts the tidy moral resolution demanded by genre convention, reflecting a darker, more ambivalent worldview, simultaneously hearkening back to the post-WWII high tide of film noir and resonant with Vietnam-era anxieties and tensions.

Friedkin wrings the utmost advantage from radical juxtaposition as a structural principle. Early scenes alternate between swank, sun-drenched Marseilles and Brooklyn’s bombed-out squalor. In France, the limpid azure of the Med serving as picturesque backdrop, Alain Charnier (Buñuel regular Fernando Rey) and his hired gun Pierre Nicoli (Marcel Bozzuffi) hatch a discreetly charming scheme to smuggle a carload of heroin into the U.S. by persuading a famous French TV actor (Frédéric de Pasquale) to import the vehicle for use in a documentary film he’s making, which, ironically enough, mirrors Friedkin’s preferred faux-vérité aesthetic. Meanwhile, over in Bedford-Stuyvesant, filmed as a sum total of burning garbage cans and urban blight, the audience is greeted by the incongruous spectacle of Santa suit-clad narcotics detective James “Popeye” Doyle (Gene Hackman) and partner Buddy Russo (Roy Scheider) running down, then beating down, a potential informant who pulls a knife on them. Back in the precinct house, the two men hash out the bust, and Doyle’s prevailing ethos emerges full-fledged. Russo: “How the hell was I supposed to know he had a knife?” Doyle: “Never trust a nigger.” Russo: “He could have been white.” Doyle: “Never trust anybody.”

Stark contrasts also fuel the extended sequence, virtually silent save for Don Ellis’s evocative score (dominated by clanging metal and mad piano scale-runs), where Doyle trails “Frog One” around a wintry NYC. Haunting shop fronts and store windows, frozen fingers wrapped around a steaming Styrofoam coffee cup, Doyle watches while, toasty warm indoors, Charnier and Nicoli tuck into a seven-course French dinner. Not knowing the Frenchman has made him, Doyle follows him into a subway station, where the two men perform an intricately choreographed pas de deux until Charnier gives him the slip, taunting Popeye with an ironic little adieu wave, a gesture that will come back to haunt him since, at film’s end, Doyle has an opportunity to return the favor.

Popeye Doyle gets onto the Frenchmen in the first place by staking out petty criminal and newsstand owner Sal Boca (Tony Lo Bianco). Popeye spots Boca boozing it up with known mobsters after-hours in the Copacabana nightclub. Friedkin’s technical mastery renders this scene indelible, bringing down the soundtrack (a jaunty Three Degrees number) until only a single jangly note dominates, bathing Doyle’s face, shot in a tight close-up, with crimson light as he eyes Boca’s group, giving free rein to another of his famous hunches: “That table’s wrong.”

Requesting a wiretap on Boca’s home and business, Doyle and Russo are forced to partner with federal agents Mulderig (stunt driver Bill Hickman) and Klein (Sonny Grosso, the real-life inspiration for Scheider’s character). Whether or not it’s intentional, the stress that subsequent scenes place on illicit surveillance must have played into the free-floating paranoia that swept the country in 1971, the era of the Kennedy and King assassinations as well as the F.B.I.’s anti-student-radical COINTELPRO program. (Moreover, the surveillance theme foretells Francis Ford Coppola’s 1974 thriller The Conversation, also starring Hackman.)

When hit man Nicoli attempts to snipe Doyle from his own rooftop, Doyle pursues his assailant onto an elevated subway platform, but Nicoli manages to elude him. Commandeering a ‘71 Le Mans, Doyle gives chase, trailing the subway car from below. Friedkin orchestrates this slam-bang set piece as a crafty conflation of the staged and shot-on-the-fly, a rapid-fire montage painstakingly assembled from multiple viewpoints: One camera in the backseat of Popeye’s car represents his POV, another bumper-mounted camera captures each and every fender bender and sideswipe, and there’s even a reverse-angle on a stymied Popeye (likely shot from flatbed truck running ahead), seen but not heard through the windshield, slamming his fist against the wheel and cursing. His single-minded determination puts pedestrians in jeopardy, including a pram-pushing woman, causing untold damage by caroming off every parked car and overstuffed trash can in sight.

This sequence, too, progresses by contrasts; while Popeye’s mayhem unfolds below, on the subway car Nicoli takes a conductor hostage, holding transit cops and irate passengers at bay until the conductor suffers a heart attack and the runaway car rams another train. Finally, Doyle gets his man, shooting Nicoli in the back as he attempts to flee the wrecked car. After the body tumbles down the iron stairs in a broken heap, Doyle collapses next to him, spent and exhausted. This schematic mirroring or doubling, alongside the questionable act of shooting a man from behind, delineates the increasingly blurred line between cop and criminal, one that’s utterly obliterated in the film’s eerie, ambiguous finale.

With his quarry, Charnier, finally in sight, Doyle chases him into a dilapidated warehouse, awash in pools of shadow, ducts and pipes sagging from the ceiling. The set design echoes Popeye’s mental and moral confusion. He’s gone rogue, cut himself off, in both senses of the phrase, from the body of the police force, who are busy rounding up the other conspirators. His sole concern at this point is getting his man, at the risk of shooting the wrong one. Pausing long enough to reload his .38 revolver, Popeye runs off into the darkness. A single shot rings out. It’s an entirely open question as to who or what he’s gunning for at this point.

Friedkin cites Costa-Gavras’s 1969 political conspiracy thriller Z as an influence on his storytelling art and pseudo-documentary aesthetic, and it’s easiest to spot the connection in the pessimistic title cards that precede the end credits: More or less everyone involved in the smuggling operation gets off with a wrist slap, save the fall guy, Devereaux, the only one to do hard time, while mastermind Charnier escapes the country, going scot-free.

In turn, The French Connection’s influence has been multifarious, putting its stamp on everything from John Frankenheimer’s underrated 1975 sequel and producer-turned-director Philip D’Antoni’s unofficial follow-up, The Seven-Ups (also starring Roy Scheider and Tony Lo Bianco), to the Spike Jonze-directed Beastie Boys video “Sabotage,” an affectionate homage-spoof of the barrage of gritty ‘70s cop shows that followed in Friedkin’s wake.

Review: Granito: How to Nail a Dictator