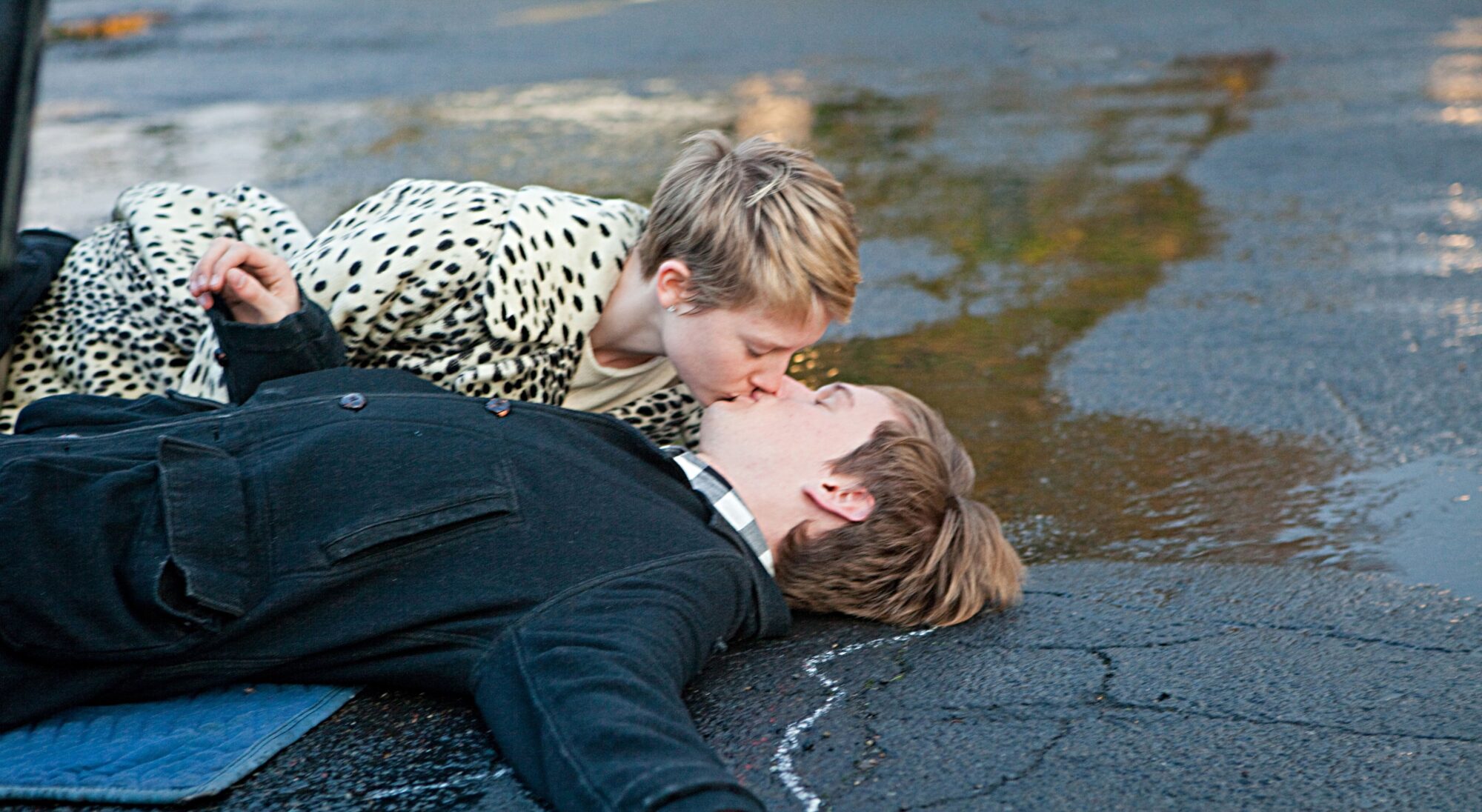 Gus Van Sant’s cinema, which of late has been fixated on immersing viewers in particular times and spaces, takes a detour into excruciating quirkland with Restless, a work of off-putting bathos and lovey-dovey nonsense that inspires not just the titular agitation, but stomach-cramping, eye-rolling antipathy. Written by Jason Lew with a dedication to making every single note ring false, this modern-hipster Love Story charts the unexpected and ill-fated romance of two dopey fictional creations, who—with every trait italicized with adorableness—resemble compendiums of precious affectations, incapable of sharing chemistry because they’re incapable of registering as flesh-and-blood humans. His name perfectly summing up his teeth-gnashing pretentiousness,

Enoch Brae (Henry Hopper) is a blond pretty boy who dresses up in Jules and Jim-style suits to attend others’ funerals, a tortured modus operandi driven by deep, dark secrets about his parents and his school expulsion that he dubs “a long story,” but actually proves to be a very short, clichéd tale of loss and acting out. At one such memorial, Enoch spies Annabel (Mia Wasikowska)—she of the androgynously short hair and round hat—and at first glance the two recognize each other as kindred idiosyncratic dolts, er, I mean souls, and soon embark on a free-flowing romance in which morose Enoch and Darwin-loving “naturalist” Annabel seize the day through ice skating, boating, frolicking through fields, and other squishy montage-ready pastimes.

Somehow thinking that Enoch and Annabel weren’t awful enough on their own, Lew ups the repellant melodramatic ante in two key ways: Enoch spends his time chatting and playing Battleship with Hiroshi (Ryô Kase), the ghost of a WWII kamikaze pilot, and Annabel is dying of a brain tumor. The former development speaks to Enoch’s brush with the great beyond, which also explains his infatuation with funerals and the dying Annabel, but such life-is-empty self-indulgences are the stuff of insufferable teenage narcissism, and Enoch never transcends his juvenile construction. Annabel is no different, a pure and noble angel who faces her passing with philosophical wonder (we’re all just specks along the universe’s timeline, blah blah blah). Aside from its wholesale phoniness, Restless repulses by wallowing in thoughts of death and the hereafter without ever treating them as serious, real concepts; rather, they’re just presented as movie-ish devices designed to engender audience weepiness. Enoch is “haunted” and Annabel is doomed, but Van Sant and Lew aren’t interested in authentically passionate and sorrowful emotions and the knotty complications they can cause, only puppy-dog platitudes about tragedy, loyalty, and finding yourself, as Enoch naturally does via Annabel’s demise.

Van Sant favors soft-lit close-ups that scream “sensitive” (!), but Restless is an aesthetically dull movie, all one-note dewy-eyed plushness that’s as mushy as Lew’s script is ungainly, highlighted by bon mots like Annabel’s sister (Schuyler Fisk) giving the profound counsel: “Be careful, cuz boys can be jerks.” When he’s not throwing rocks at trains with Hiroshi (who gets oh-so-upset when Nagasaki is mentioned), and she’s not sketching birds, Enoch and Annabel confront her impending fate by playing Operation and visiting the hospital morgue, up until the point that Enoch can’t take it anymore and, with infantile petulance, lashes out at her doctor: “Make her better!” Toss in some meet-cute blather about a xylophone and Enoch and Annabel having a pretend-conversation with Enoch’s parents’ gravestones, and Restless seems actively interested in bludgeoning its audience with twee artifice.

Such aggression begets only revulsion, with Wasikowska’s doe-eyed mugging and Hopper’s little-boy brooding—all of it so monotonous and uncomplicated as to register as a joke—working in harmony with Van Sant’s pillowy visuals and the soundtrack’s emo ballads. The result is an exercise in hollow earnestness overkill, and one whose sole genuine moment comes courtesy of Hiroshi, when he reasonably wonders about Annabel, in a manner that calls attention to Van Sant’s desire to visually posit this as a quasi-homosexual romance, “Why is she dressed like a boy?”