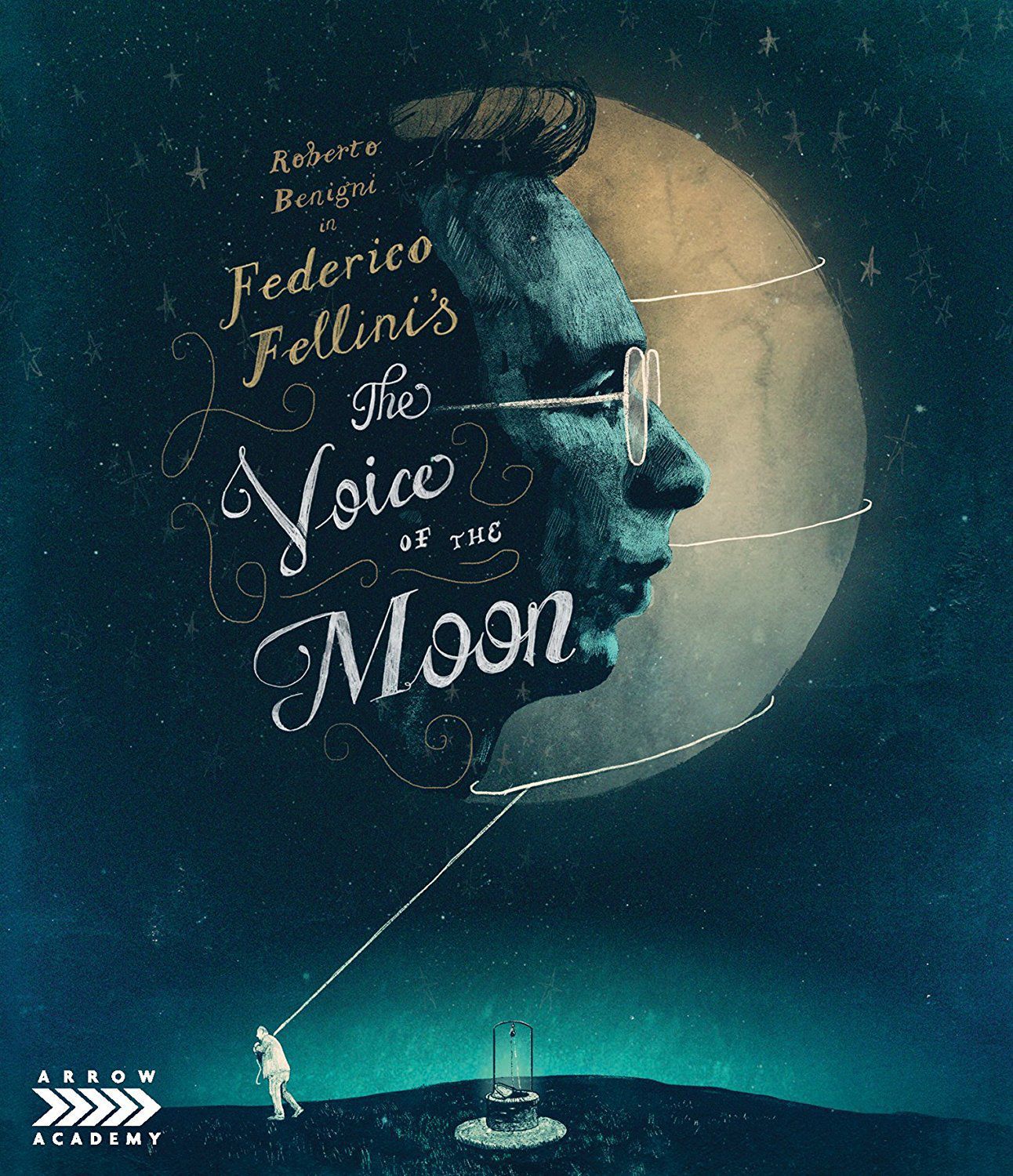 Somewhere deep in the foggy Italian countryside, in an abandoned barn in the middle of the night, Michael Jackson’s “The Way You Make Me Feel” booms over a sound system for the dancing pleasure of a mob of leather-clad Gen X-ers. On the evidence of The Voice of the Moon, this was an aging Federico Fellini’s vision of a world under the spell of globalized pop music and youth culture, where the new and the hip is a pervasive bug filling every crevice left by the old and the archaic. When this endearingly absurdist illusion manifests itself around the three-quarter mark of the film, however, it’s a sense of euphoria, not cynicism, that prevails. Fellini’s main characters—the tragicomic duo of poet Ivo Salvini (Roberto Benigni) and alley-dwelling raconteur Gonnella (Paolo Villaggio)—stumble upon the scene with responses ranging from astonishment to disgust, but the camera’s perspective as it caroms freely through the bouncing bodies is a more single-minded rapture. For Fellini, modernity is just another circus in which to gallivant around.

None of this is to imply that the Italian director’s swan song, a film never properly released in the United States, is any kind of salute to the future. Like so much of Fellini’s output, nostalgia is the operating principle here, with Ivo representing a transparent vehicle for the filmmaker to reflect on his own past. As with many Fellini protagonists, he’s a dewy-eyed romantic with a tendency to lapse into sense memories of earlier times, and he harbors a 14-year-old’s obsession with the female figure—particularly that of the buxom Aldina (Nadia Ottaviani). In a fashion similar to Amarcord, the film bounds from one buoyant recollection to another, tying each together with little more than a visual association here or a stray line of dialogue there, with the poetic threading being the idea of the moon as a soothsaying object of affection to woo and fawn over. (The moon only ever speaks in monosyllabic whispers, but Ivo acts as though it’s communicating with him regularly.)

Alongside these flamboyant hallucinations of the past, which take place largely in the northern Italian region of Emilia-Romagna where Fellini grew up, are long sequences of mad cacophony in the town square. Construction work and celebration coexist seemingly constantly as the town prepares for a one-two punch of community events: first a gnocchi festival-cum-beauty pageant that will feature Aldina on a parade float, then a public forum offering an opportunity to speak with leaders of church and state alongside the literal moon, which is tugged down to Earth for a cameo appearance. Along the way there are impromptu dances, speeches, and near-riots, with one overzealous fellow at one point even using the venue to pose questions about the meaning of life over the loudspeakers, an inquiry punctuated by instinctive skyward gunfire. The sense of a town square as a melting pot of a region’s eccentricities, hosting those from the dregs of society as well as the local elite while providing a space for communion, was surely an antiquated concept in 1990, which makes the vigor of its realization all the more poignant.

The Voice of the Moon doesn’t exactly justify its two-hour runtime. The narrative, loosely based on Ermanno Cavazzoni’s novel The Lunatics’ Poem, is more or less arbitrary beyond the rough outline of tracking Ivo and Gonnella’s spontaneous friendship and commiseration, but its procession of jaw-dropping spectacles are charged with the sense of an artist gassing his imagination for one last time. Magnificent images and surreal situations abound: fireworks erupting over a barren field somewhere on the outskirts of town, a house trembling and smoking from a couple’s carnal lovemaking, a curmudgeonly former musician fashioning a makeshift home in the crevice of a cemetery, a sentimental view across the overlapping rooftops and powerlines of the village that feels pulled right from the memory bank, and an endless procession of cyclists illuminating a gloomy country path. Such baroque, screen-filling extravagance is sorely missed in an age when mastery is more commonly equated with restraint, all of which makes the revival of Fellini’s quaint, decadent final vision all the more welcome.

The degree of clarity in the visual transfer here is remarkable. Details can be gleaned in the furthest reaches and deepest shadows of Federico Fellini’s master shots, and the colors are vividly differentiated. Like many late-career Fellini films, the soundscapes and dialogue are largely designed in post, and Arrow has done a fine job mastering this dynamic mix. Voices are crisp and upfront, while background ambiance is never too quiet.

“Fellini is Fellini.” This is the characterization of one Voice of the Moon extra when asked to summarize his experience on the set, a reverent sentiment which echoes a good number of those interviewed over the course of Towards the Moon with Fellini, the 16mm documentary that’s included in Arrow’s set. Though regarded as a mad genius with unknown motives by Benigni, Villaggio, and others, Fellini nonetheless comes across as a ringleader worth trusting and following, and the documentary’s immersive behind-the-scenes footage bears witness from all angles to the director’s hands-on involvement in his elaborate production. This rare artifact alone would be sufficient, but Arrow also includes a slideshow of marketing material and other ephemera related to the film as well as celebratory liner notes by film critic and lecturer Pasquale Iannone that helpfully recap the wayward movements of the plot and place them into the larger context of Fellini’s career.

Never properly released in the States, Federico Fellini’s extravagant final film is a charming reminder of a lost giant and a lost style of moviemaking.