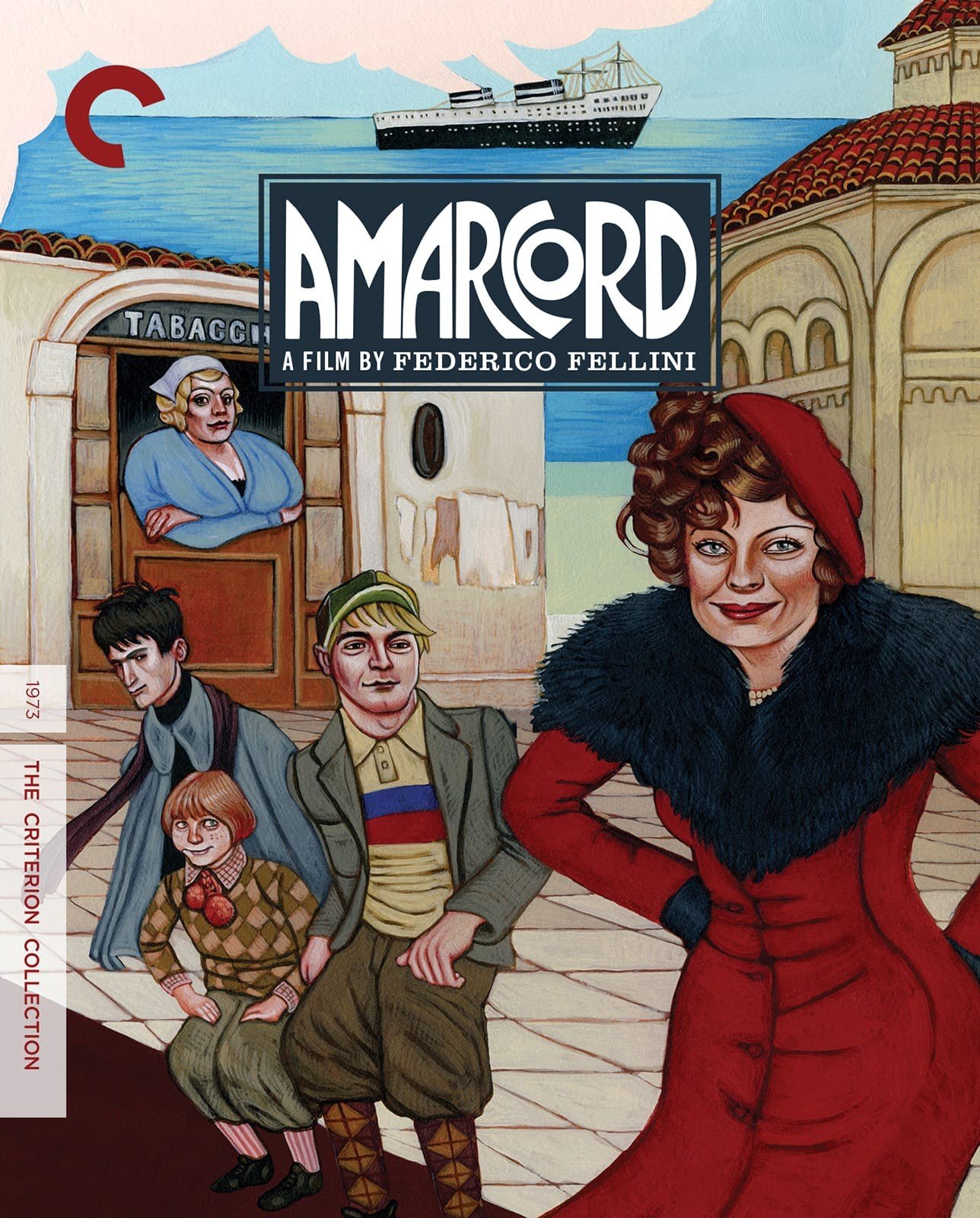 My hazy recollection of Amarcord, a film I first saw in my early 20s, mirrors director Federico Fellini’s own distrusting memory of his small-town upbringing during the rise of fascism in the 1930s. Like the many rambling and diverse characters populating Fellini’s heightened landscape, my impressions of the film have morphed over time. It was easy to respect Fellini’s aesthetics the first go round, but what exactly was he trying to say with this very languishing faux autobiography? My initial befuddlement isn’t surprising, since Amarcord is chalk full of gaps and inconsistencies, fluctuating tones, and perspectives challenging the very foundations of coherent storytelling. Watching Amarcord again, it’s clear for me the film’s main virtues reside in how it changes with the viewer’s point of view, tapping into an unconscious desire to retain nostalgia no matter how futile the process may be.

Amarcord uses seasonal changes, political shifts, and emotional realizations to frame specific moments of character that fleetingly pass by with the wind, creating a colorful, fragile dream world out of familiar artifacts that somehow still seem alien. In the opening moments, puffball flowers fill the frame signifying the transition from winter to spring, Fellini’s constantly roving camera following the white symbols of change as they float in the air from one part of town to the next. This potent fluidity glides us into a vibrant nighttime bonfire at the center of town, with one character yelling out “burn the winter and the cold” as the fire rises into the darkness. Fellini’s human centerpiece, the dazzling Gradisca (Magali Noel), struts down the street wearing a red dress that catches the eye of every male within shouting distance. Gradisca will be the object of desire for Fellini’s stand in, the horny teenager Titta (Bruno Zanin), who looks on in awe as she snakes through the sea of moving bodies.

This is not only Titta’s story, but his family’s as well, and Fellini follows patriarch Aurelio (Armando Brancia), uncle Lallo (Nando Orfei), and mother Miranda (Puppella Maggio) during different parts of the film. Together their trajectories form a pattern of experience that gives the viewer only so much information, and this limited perspective them denies individuality for a more collective personality. At one point, Aurelio is called in by Mussolini’s secret police and tortured, forced to drink castor oil, while a few scenes later Titta and his friends watch Lallo seductively dance with a sexy Scandinavian women then disappear into the darkness. A family day trip with their crazy uncle Teo offers another tangential sequence in Amarcord, wandering into the outlining rural areas of the town in a gripping series of extreme long shots. But this supposedly day of movement gets rooted when Teo climbs a tree and starts yelling, “I want a woman,” forcing the family into another chaotic situation. In this sense, Fellini is able to effortlessly change from light to dark, exhilaration to sadness, and life to death in a matter of seconds, these tonal combinations acting as chapter headings for Titta’s experiences with various relatives.

Structurally, Amarcord is a slow dance grooving from character to character without the safety net of a cohesive narrative. As a result, Fellini’s film drifts, swirls, and churns through time, reveling in the imagery of specific moments but ultimately pushing forward without much exposition. While Amarcord can be seen as one gigantic flashback, smaller scenes on past discretions create an even wider net of possibility. In perhaps the film’s most stunning moment, Titta follows Gradisca into an empty movie theater, each editing dissolve moving him closer to her seat. Finally, in a wondrously sensual two-shot, Titta puts his hand on Gradisca’s leg. Enthralled with the movie, Gradisca almost doesn’t notice his advances. “Looking for something,” she finally says, and Fellini abruptly cuts to Titta’s disappointed face months later as he tells his priest the story during confession. When Titta leaves, one of his friends occupies the pew, and the man of God instantly warns him, “St. Louis weeps when you touch yourself.” For Fellini, there is no separation of church, cinema, memory, and sex.

If Fellini’s fragmented representation of community in Amarcord mimics a circus of different players performing for the audience, the stage is continuously fascinating to watch. Color pops from all angles, and each scene is given a formidable texture and detail that dovetails with Titta’s disjointed subjectivity. But Amarcord is a film about the town of Rimini just as much as any individual, a theme Fellini brings to fruition when the large citizenry amass on boats and heads out to sea. Through the foggy night a massive ocean liner called The Rex passes by, the crowd yelling with pride at the symbol of the fascist government responsible for building the vessel. Titta watches on in jubilation, unaware of the subtext behind the devastating symbolism, a telling moment in time adrift in a whirlpool of fractured memory.

In this way, Amarcord reflects the fallacies of past experiences by painting them messily on a textured canvas so we may try to understand them in a new way. Still, these images are aloof, separate from reality as all dreams are after so many years of deconstructed yearning. In his essay “Federico of the Spirits,” printed in the booklet accompanying the Criterion Blu-ray disc, scholar Sam Rohdie states Fellini was “a great liar.” But there’s some layer of truth to every elaborate fib, and with Amarcord, Fellini wants each viewer decide which lies are worth remembering, and which ones should disappear into the night.

Amarcord looks good on Criterion’s 1080p high definition transfer, but I don’t think anything can match seeing this film projected on the big screen. Since this is a story filled to the brim with stunning color schemes, one should look no further than Gradisca’s red dress or blue of the ocean for positive proof of the image quality. The night scenes occasionally darken out faces and skin tones, but this gives certain scenes an eerie quality of time passing. The sound design, presented in either Italian mono or dubbed English, makes Nino Rota’s sublime score the center of attention, nicely mixing levels of dialogue with the theme music. Still, some sequences lack the audible punch of other Criterion discs.

“Fellini Homecoming,” a profound documentary on Fellini’s complicated relationship with his hometown of Rimini, charts Amarcord’s fascinating production history. An interview with star Magali Noel touches on many subjects, one being Fellini’s production choice to shoot the film on set at Cinecitta, specifically the epic sequence with The Rex ocean liner. On the excellent audio commentary, film scholars Peter Brunette and Frank Burke discuss pertinent themes and motifs in Amarcord and how they relate to Fellini’s films as a whole. Fellini’s pre-production drawings, archival interviews with Fellini after the film screened at Cannes, a restoration demonstration, a deleted scene, a collection of rare photographs, and a booklet featuring an essay by scholar Sam Rohdie and Fellini’s 1967 essay “My Rimini” are also included.

Amarcord lovingly pays tribute to the way memory fades away and imagination takes over, a process that grows more intoxicating with age.

Review: Woody Allen’s You Will Meet a Tall Dark Stranger on Sony DVD