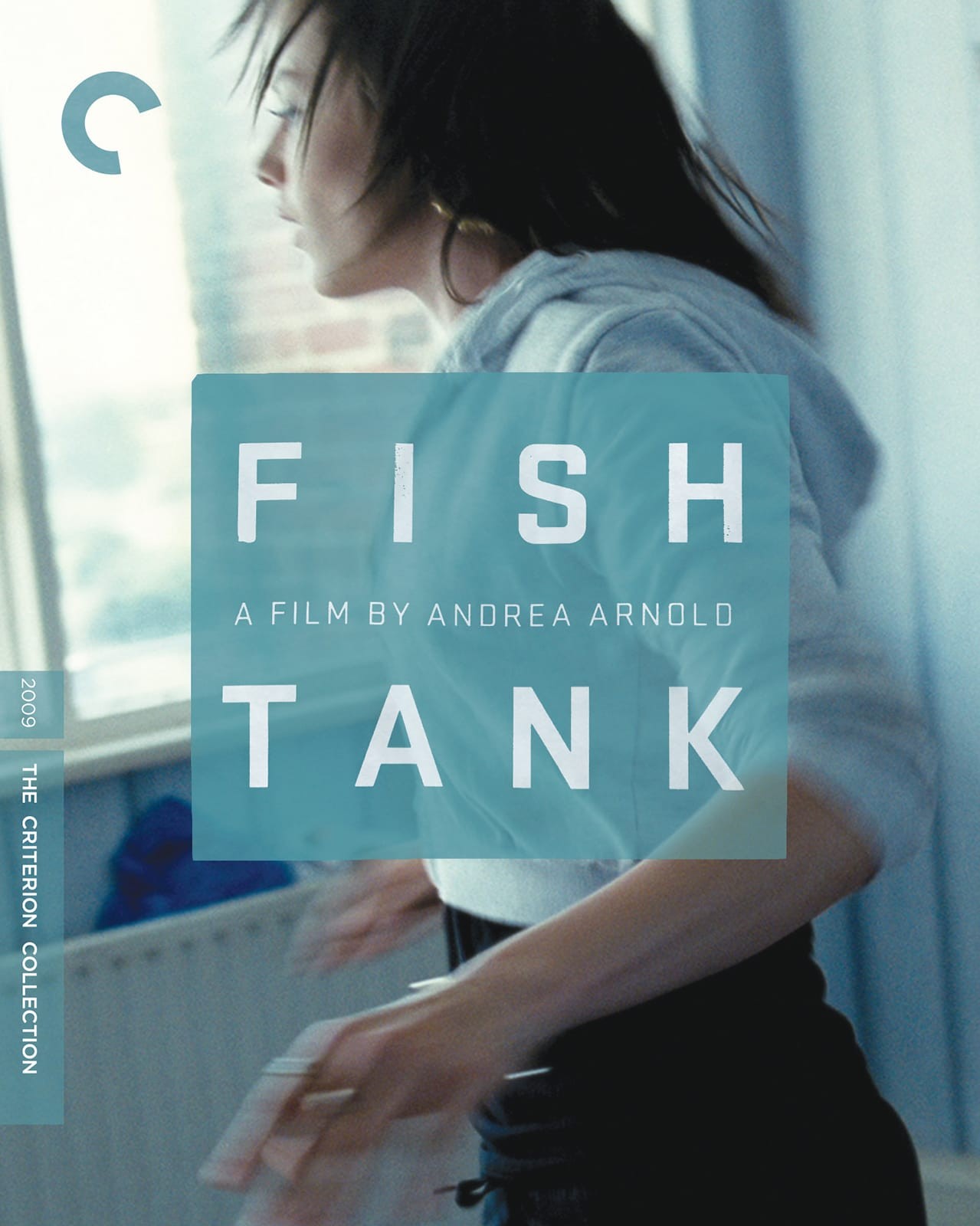 Mia (Katie Jarvis), the propulsive teenage heroine of Andrea Arnold’s sophomore feature Fish Tank, has a gigantic poster of a tiger on her bedroom door. This parallel between character and animal fits nicely, as Mia spends most of the film pacing back and forth like a caged soul looking for something (or someone) to set her free. Arnold’s handheld visual aesthetic, so polished and fluid in her enthralling debut, 2006’s Red Road, now sputters on a flimsy axis, stalking Mia’s often spastic but sometimes graceful dance through life. While Fish Tank is a coming-of-age story, with Arnold fluctuating tones to highlight Mia’s highs and lows, much of the film is intrinsically tied to the suffocating stasis of urban solace, the bits of silence wavering in between extreme emotional outbursts.

Fish Tank’s opening sequence fits this mold, finding Mia alone looking down and breathing heavily after a tiring dance practice in an empty apartment, as if already winded by the perpetual mixture of disappointment and monotony that defines her life. This quiet doesn’t last long, as Mia’s volatility comes center stage when she violently confronts a group of scandalous tweens dancing for the neighborhood boys, one of them a former friend who’s forsaken their relationship over a minor dispute. As with every plot turn in Fish Tank, this is a moment of social transition for Mia, and much of the film’s energy stems from how she reacts to the adult complexities of the surrounding world. The many paradoxes of life, death, and sex confound Mia’s perspective throughout, and Fish Tank becomes a stirring requiem to her consistently futile pursuit of understanding.

The one constant in Mia’s life is dance, and the healing power of artistic expression gets put to the test throughout the film. Whenever something bad happens, be it an argument with her mother Joanne (Kierston Warening) or her sister Tyler (Rebecca Griffiths), Mia turns to dancing for release. She practices hip hop moves with a fundamental devotion to the subtlety of movement, taking inspiration from the countless music videos gracing her family television, but unafraid of shedding the trashy qualities for more nuanced expression. Unlike the other girls her age, Mia doesn’t perform for a male audience—just for herself, as if the act itself is something sacred. When Joanne’s new boyfriend, Connor (Michael Fassbender), accidentally catches Mia dancing in the kitchen, she gets startled not only by his presence but by his flirtatious acknowledgement of her femininity. A young woman’s fantasy world has jarringly overlapped with a subjective adult experience, and this one moment sets Fish Tank on a track toward emotional fragmentation.

Connor becomes more of a staple in Joanne’s life, and Mia’s own curiosity about sex and physicality get a visual motif in the many slow-mo close-ups based around their mutual touch. Arnold zeroes in on the contours of Connor’s shirtless torso as he walks up the stairs, Mia’s amplified breath as Connor sets her limp body down onto a bed, and Mia’s bleeding foot as Connor puts a bandage around her wound. All of these shots retain a lyrical quality, elevating Mia’s perspective out of the standard urban malaise represented by the constant hum of diagetic neighborhood noise. This sensual rush culminates in the film’s most uncomfortable moment: a sudden sex scene between Connor and Mia that splinters the narrative into a thousand pieces. As a result, Arnold’s carefully calibrated story dips into the well of contrived melodrama, nearly collapsing under the weight of its own pretense.

While Fish Tank’s third act is incredibly problematic (some of the symbolism is overtly simplistic), Arnold’s resistance to finite solutions makes Mia’s near-foray into tragic plight emotionally salvageable. Instead of an easy summation, Arnold leaves us with indelible images ingrained by the camera in much the way Mia might remember them years down the road. A dying fish lying on the grass sucking its last breath, a dog eating the guts of that same fish on the kitchen floor, and a cracked windshield held together by blood and human hair all linger long after they fill the frame. The meticulously placed long shots cementing the viewer’s omniscient perspective of Mia’s transition are even more telling, like when Mia and Connor face each other knee deep in a calm river, or Mia is framed by a background of epic cranes, and finally when two small children traverse through tall grass as storm clouds roll in. In a film about the suffocating stranglehold of barriers and limitations, Arnold cuts wide to hint at the growing possibilities beyond the frame.

Despite Fish Tank’s harsh and unrelenting view of crippling family dynamics, Arnold ends the film by positioning Mia, Joanne, and Tyler in a stunningly singular dance sequence together. The moment connects all three in a generational chain of positive movement, the anger, hatred, and betrayal evaporating in favor of rhythmic understanding. Still, Mia’s restless soul must leave the nest in order to survive, and Tyler’s parting prose to her older sister is especially haunting. “Say hello to the whales for me,” she screams, Mia waving goodbye as the child disappears from view. After an avalanche of emotional and economic uncertainty, Fish Tank gives us hope Mia will do just that.

Fish Tank is presented in 1080p HD with its original 1.33:1 aspect ratio intact. Overall, the transfer retains Andrea Arnold’s strange combination of vibrant splashes of color and collective grittiness, with the blues, blacks, and grays of Essex nicely rendered in both exterior and interior shots. The skin tones of faces, hands, and bodies always contain a wonderful amount of detail, important to a film dealing with the expressiveness of touch. Only in some of the nighttime sequences do some of the background materials blur into the darkness, losing the necessary nuance in key dramatic scenes. Fish Tank depends heavily on overlapping sound design, specifically the mixture of dialogue, diagetic music, and sound effects. The DTS-MA soundtrack captures this aesthetic brilliantly, making each sound feel part of an evolving audible space.

One of Criterion’s more bare-boned discs, but the supplements are still superlative, especially the new transfers of Andrea Arnold’s three short films: Milk, from 1998, follows a suburban woman’s breakdown after she experiences a miscarriage, evoking Red Road’s dark vision of fractured sexuality; Dog, from 2001, echoes Fish Tank’s stifling urban milieu and themes of female entrapment; and 2003’s Academy Award-winning Wasp, whose tonal shift recall Arnold’s features, building tension out of the audience’s expectation of tragedy. The disc includes an informative interview with star Kierston Wareing, who discusses Arnold’s directing methods and location choices, and an audio taped conversation with Michael Fassbender from the Museum of Moving Image. No audio commentary is offered, frustrating considering it feels necessary to get Arnold’s impressions and perspectives on this very personal film. Audition footage, a stills gallery, the original theatrical trailer, and an insightful essay by film scholar Ian Christie are also included.

Suffocation takes many forms in Fish Tank, the most notable being romantic promises written in water.