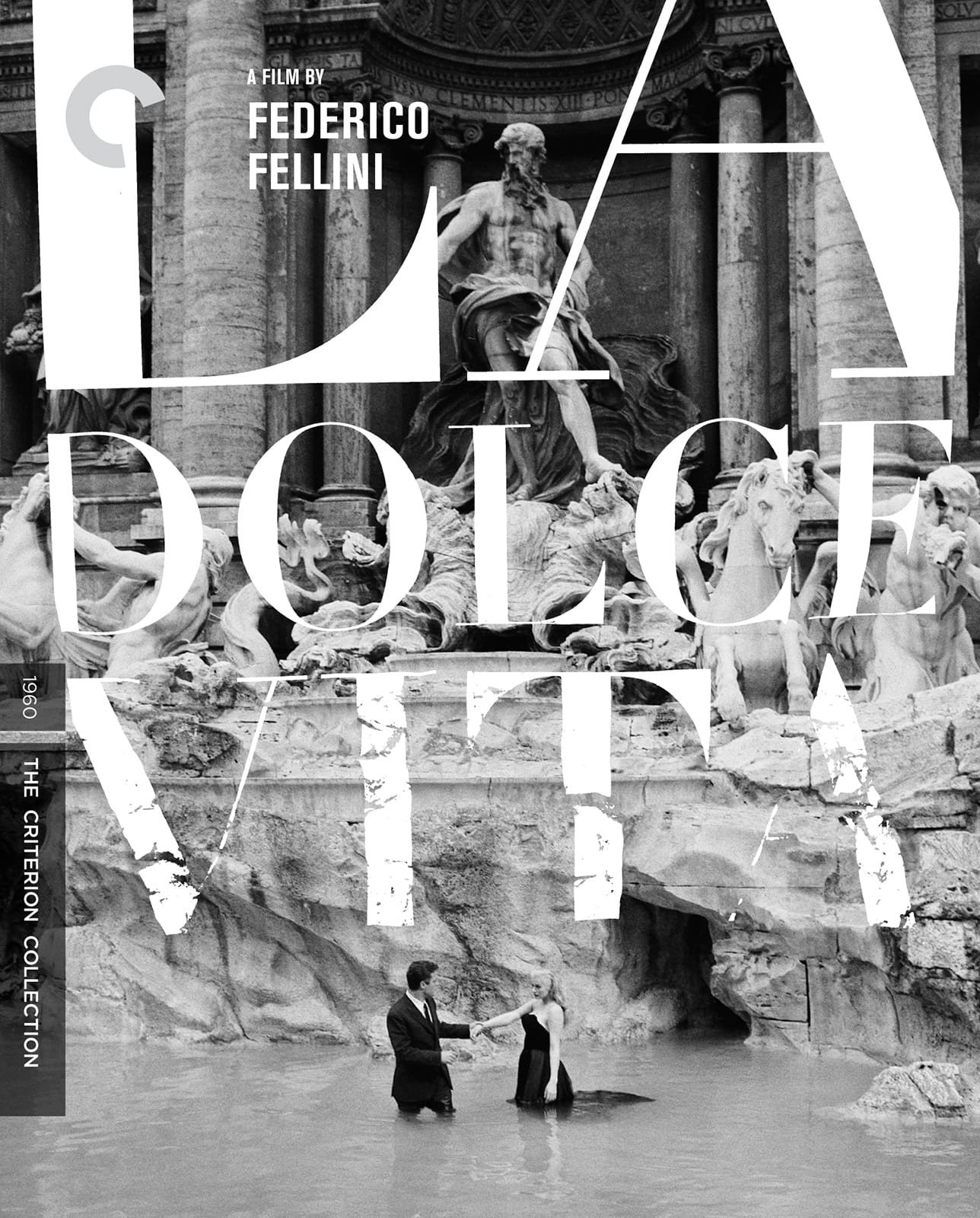 A question that’s conspicuously and consistently brought up in Federico Fellini’s La Dolce Vita is whether journalist and gadfly Marcello Rubini (Marcello Mastroianni) is more interested in literature or the “news.” The latter term is used loosely in Fellini’s Rome, as Marcello largely reports on celebrity gossip, religious hokum, aristocratic orgies, and other culturally empty spectacles of desperation and heedless wealth. These large-scale odysseys that Marcello strolls through speak to bigger issues pertaining to post-war Italy, but there’s no pointed moralism, no feigned sense of authenticity. The film vacillates between striking active, antic, and oft-ludicrous set pieces and small, lacerating bouts of quasi-realistic melodrama. In the balance, Fellini finds an aching, unshakeable truth about the power and rot of fictions, and the perilous state of existential being those who facilitate these myths and stories find themselves in.

The penny drops in the opening moments, a quasi-controversial sequence featuring Marcello and his friends flying in a helicopter carrying a statue of Jesus over Rome. The Catholic church saw this as a parody of Jesus’s second coming, which it is, but it’s also a rather blatant indictment of Italy’s moral center in the wake of Mussolini’s execution and Rome’s reconstruction. Fellini catches children chasing after the statue in fervor, but they might as well be running to catch up with Marcello and the extravagance he wades through daily. It’s an essential dichotomy for the writer-director, the tough, unthanking performance of religion and the workaday life juxtaposed against the shallow and ultimately degrading fantasia of absurd wealth and show business.

In Fellini’s view, neither is a more purposeful, more altruistic way of surviving than the other, though he sees the sheer pleasures of the latter more clearly. It’s the adventurism of the titular “sweet life” that Fellini conveys most passionately, the sense of being above and outside of real life. Before he goes gallivanting with Anita Ekbert’s Silvia, the busty, luminous screen goddess, in the Fountain of Neptune, he takes a sudden ride with Maddalena (Anouk Aimée), an affluent heiress, to drop a prostitute off at her flooded basement apartment. The pinch is that they use her bedroom for a quickie, using her poverty-stricken environs as little more than an inventive setting for their affair. And when he’s asked to cover sightings of the blessed mother by two children, Fellini turns the entire ordeal into a grand act of theatricality, his widescreen framing making the circle of pleading believers, newsmen, photographers, and outnumbered police officers into a three-ring circus.

The photographers, including Marcello’s sidekick, Paparazzo (Walter Santesso), often make their subjects pose or rearrange the setting, and they hop around the environs like flies buzzing around to different sides of a heap of garbage. In essence, they’re getting coverage, and it’s to Fellini’s credit that he brandishes such a self-deprecating view of his own profession. The trajectory of Marcello’s journey seems scattershot in terms of its sudden perspective and tonal shifts, but the film is a clear spiral downward in terms of emotions and morals. It’s a visit from Marcello’s father (Annibale Ninchi) that gets at the heart of Marcello’s love of the nightlife and decreasing enthusiasm for Emma (Yvonne Furneaux), his suicidal fiancée. While out at an old cabaret, Marcello’s father opines that he feels ageless when out, but feels the weight of his years at home. To confront marriage and “real life” is to also confront the slow-moving disease of mortality for Marcello, which he’s ultimately not capable of. In their final encounter, Fellini backlights the father, accentuating the loneliness and despair of his station, but also rendering him without detail or age in several instances, appearing as if a shadow of himself.

The entire sequence aches with the weight of age and impending death, but the core of what leads Marcello to his final place as an agent and promoter, cruelly shaming a random party girl, is his relationship to Steiner (Alain Cuny), a smart, close-cropped friend who works in publishing. Marcello genuinely looks up to Steiner, praising his taste in company, family, and art, but the moment Steiner takes to a church organ to play the famed piece that the phantom of the opera plays, a quiet dread sets in, one that doesn’t reach full boil until Marcello finds that Steiner has killed himself and his two children. In essence, Fellini is arguing over the very nature of the cinema, to depict life as it is or to use it toward more expressive and arguable ridiculous visions of life, but this doesn’t take away from the horror of Steiner’s end, or the piercing melancholy of where we leave Marcello. If Fellini ultimately proves to be a bit of a cynic with this “no one gets out alive” conclusion, the vitality is never lost in his widescreen views of a world equally by both restraint and excess. At one point, a photographer asks Marcello what to do after he’s done with a photo shoot of a woman standing on a table above a horse, to which Marcello suggests he reverse them. The line comes off as a joke, but for Fellini, the point always seemed to be to have the horse on the table as often as the lady.

The level of clarity and detail in Criterion’s 1080p transfer is rendered from a recent 4k restoration, and its hard to imagine a better transfer being afforded. The blacks levels are beautiful and inky, and the whites and greys are peerless. The grain is beautifully retained, with very little evidence of digital modifications, and the general texture of the film is clearer than ever. The image is perfect, and though limited to the original LPCM Mono soundtrack, the audio is just as great. The dialogue is out front and clear as a bell, and the balance on the score, songs, and natural noise is consistently excellent.

The big prize here is a 30-minute interview between Federico Fellini and NBC News’s Irving R. Levine from 1965, in which the writer-director opens up about his love for colleagues such as Alfred Hitchcock and Ingmar Bergman, and how his previous entertainment jobs led him to his profession. It’s an enveloping watch, as are the other video interviews with film scholar David Forgacs, journalist Antonello Sarno, and the great filmmaker Lina Wertmüller, who worked as an assistant director on 8 ½. Between their perspectives, we get a fuller view of the cultural and historical implications of Fellini’s film before and after its release, on top of the film’s own inherent insights and observations. Then there’s the exquisite short essay film on Fellini’s compositions and framings by :: kogonada, and the informative 48-minute audio interview from 1963 between Marcello Mastroianni and Gideon Bachmann. Short of a commentary track by Fellini himself, one couldn’t ask for much more from this package, and that’s not even taking into account the memorabilia featurette or Gary Giddins’s studied essay on the film.

Fellini’s unsparing odyssey of corrosive wealth and anxious commonality is given a reliably peerless A/V transfer from Criterion, packaged with a long conga line of extras that add context and insight into one of Italian cinema’s unmovable masterpieces.