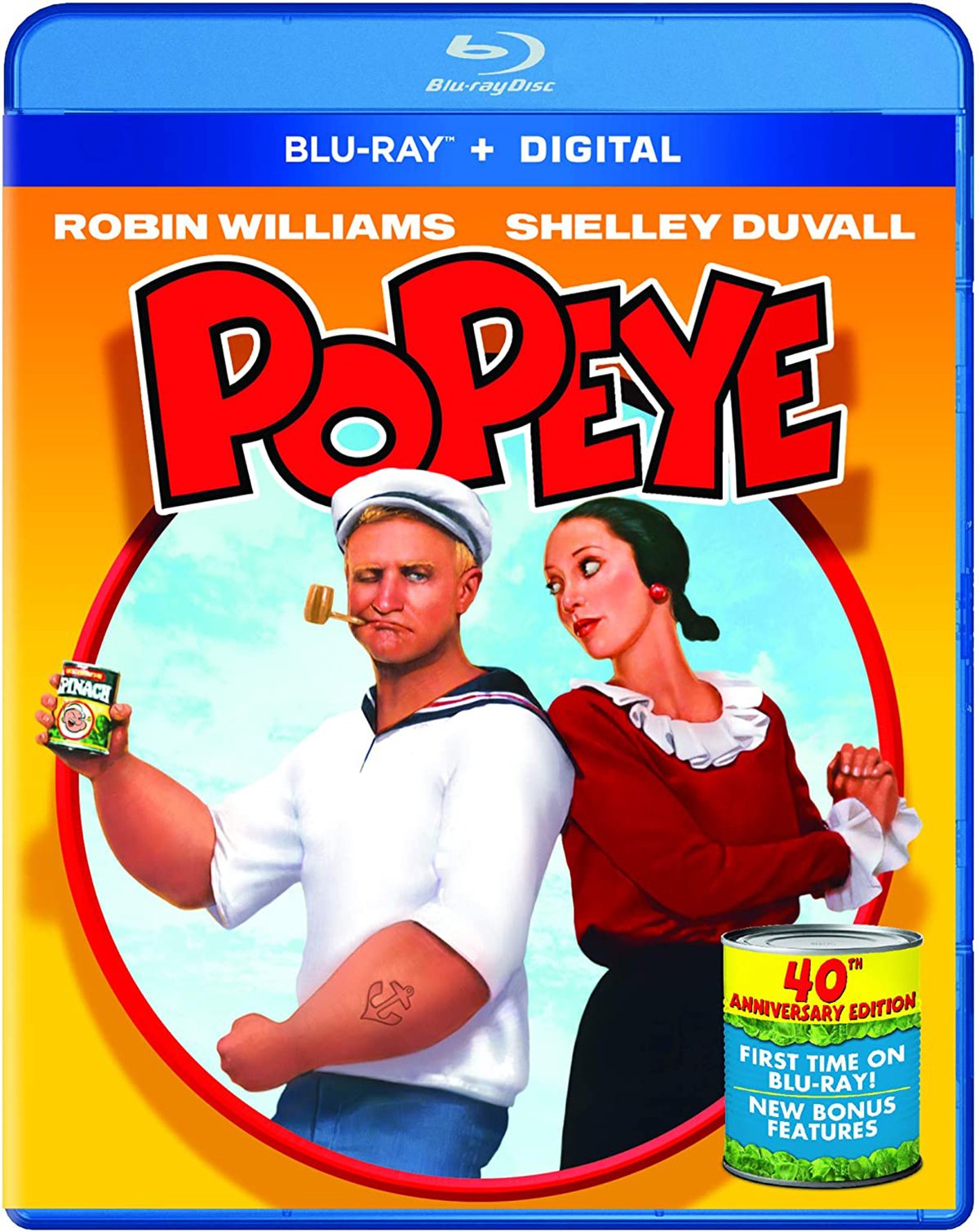 Robert Altman’s fans have all but written off 1980’s Popeye as another charred remnant of the auteur’s spectacular burnout at the close of the 1970s—virtually indistinguishable from the equally underrated Health, A Wedding, and Quintet. But Popeye is in need of a serious critical rediscovery, because virtually every one of Altman’s signature hallmarks—that teeming sense of community gathering habits, concern for social inequalities, and fondness for earnest, country-fried comic bits—are very much alive here.

Anyone new to Altman is likely to be put off by the film’s unique worldview. Known for building American communities from the bottom up, the director took a well-established slice of Americana and seemingly refused to distance himself through irony or radical departures—like, say, having Popeye on the front lines in the Korean War. Popeye (Robin Williams), Bluto (Paul L. Smith), and Olive Oyl (Shelley Duvall) trip and mumble their way through exaggerated love triangles just like they did in the original serial comics and short films. But if you strip away the film’s loyalty to the E.C. Segar source material, it’s not difficult to see that, in many ways, Popeye is Altman’s comic spin on McCabe & Mrs. Miller, even substituting that film’s whore house with a floating gambling house and brothel. Like Warren Beatty’s John McCabe, Williams’s Popeye has a habit of vocalizing his inner dialogues.

For a film often dismissed as kiddie fare, there are a surprising number of Altman concepts that are likely to fly right over the heads of youngins. The town of Sweethaven, where Popeye lands in search of his Pap, is cheerfully oblivious to the fact that they’re in a state of severe economic and social oppression. Bluto represents the strong arm of the law (the beanpole constable jumps out of windows whenever the man-mountain enters the room) and the noodly taxman represents its sticky fingers. Both work for a shadowy dictatorial menace known as the Commodore. “Next to Wimpy, I hate him best,” the Topol-like Mr. Geezil privately bellows. The hints of a far more menacing political situation undercut most of the jokes. Wimpy’s (Paul Dooley) immortal “I will gladly pay you Tuesday for a hamburger today” sounds like it’s coming from a man blissfully ignorant of his severe dependency on credit currency.

To kids, Wimpy is a hamburgler. To adults, he’s the recently laid-off neighbor. Also, most kids probably can’t grasp what Olive Oyl’s arpeggio-ridden ballad to Bluto’s “large” qualities is really about. Throughout Popeye, Altman directs the complex web of social interactions with a frame that’s both inclusive and prying. And the actors he collected and dropped in Malta’s simulated community help evoke an atmosphere that is genial yet guarded. Duvall couldn’t possibly have played Olive Oyl badly, and to watch Williams’s sweet interpretation of the hyper-violent original character here is to mourn what we lost when the actor bamboozled his way into the hearts of Oscar prognosticators looking for an easy dark horse with roles in such films as Patch Adams, Bicentennial Man, and Jakob the Liar.

This is the first time Popeye has been released on Blu-ray and Paramount’s 1080p transfer really does wonders for the film. The image is consistently sharp, with the high dynamic range allowing the stunning Malta setting and the vibrant colors of the costumes to really pop, especially against the brown hues that dominate the film’s elaborate set. Grain levels are even, albeit a bit slight at times, and the black levels are strong, rendering minute details visible even during the darkest nighttime sequences. As for the audio, Robert Altman’s typically layered sound design and the film’s many songs are given a robust mix that nicely separates all of the overlapping dialogue and deluge of various sound effects.

“Return to Sweethaven: A Look Back with Robin and the Altmans” looks at some of the insanity of the film’s shoot in Malta, but while the stories about the efforts made to create the Sweethaven set and the studio’s responses to the production going long and over budget are interesting, 13 minutes is barely enough time to scratch the surface. Considering the perceived failure of the film and its effect on the next decade of Altman’s career, this subject matter begs for a more comprehensive treatment. The other featurette on the disc, “The Popeye Company Players,” is even more perfunctory, running down the major actors in the film and providing brief behind-the-scenes anecdotes, such as Robin Williams learning to dance for the film and Altman’s insistence on Shelley Duvall for the part of Olive Oyl. The disc is rounded out with a very short slideshow of pictures from the film’s debut in 1980 and a feature that lets you watch only the songs from the film, both separately or all in a row.

Robert Altman’s idiosyncratic, undervalued musical comedy receives a beautiful transfer for its Blu-ray debut, but the dearth of extras leaves much to be desired.