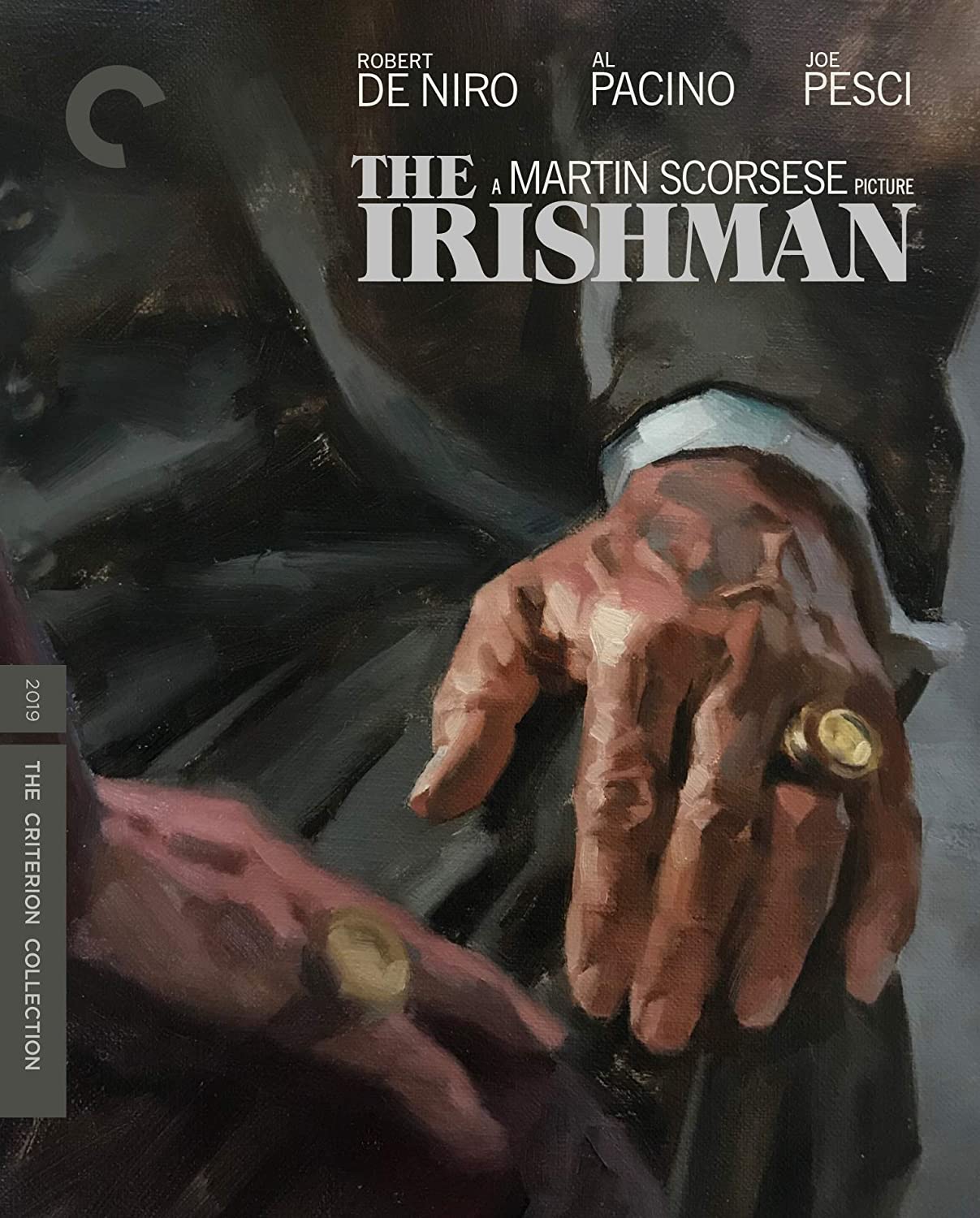 With The Irishman, Martin Scorsese proves to be in an alluringly funereal mood. Appropriately, his latest film opens in a kind of purgatory, with a slow, serpentine tracking shot through a nursing home. The Five Satins’s “In the Still of the Night” acts as murmuring accompaniment, and the doo-wop classic, repeated several times throughout the film, is as pivotal and hauntingly autumnal a needle drop as the Platters’s “My Prayer” in David Lynch’s Twin Peaks: The Return. Rodrigo Prieto’s camera eventually settles on the elderly, wheelchair-bound labor union official and mobster Frank “The Irishman” Sheeran (Robert De Niro), who’s lost in thought but also ready to talk a blue streak about what he believes to have been a very eventful existence.

In reality, Sheeran told his life story to author and former investigator Charles Brandt for the 2004 memoir I Heard You Paint Houses, which is the basis for the film’s screenplay by Steven Zaillian. (The book’s title is mob code for blood splattering the walls during a contract killing.) In The Irishman, which spans the mid-1940s to the early aughts, Sheeran is effectively chatting with the audience about his rise from a low-level hood to the right-hand man to labor union leader Jimmy Hoffa (Al Pacino), who he also claims to have killed in 1975. Yet the degree to which Sheeran is an unreliable narrator, perhaps even to himself, is always debatable in the film, and not just because the Hoffa case has never been officially closed.

More so than Goodfellas or Casino, Scorsese’s two other told-in-retrospect gangster films, The Irishman—at least for the first two hours of its riveting three-and-a-half-hour runtime—feels composed of burnished, often blackly funny, fragments of erratic memory. Sheeran glosses over the truth even when he’s telling it, recalling the past, even at its most violent, with a propulsive, rosy cheer that plays at a cursory glance like Goodfellas-lite. A comical aside about two gangsters named “Whispers” (“the other one,” Sheeran keeps repeating as if he were in an Abbott and Costello routine) would slot quite comfortably into that earlier film.

Yet there are narrative and aesthetic tells in The Irishman that hint at the much darker undercurrents that will eventually come to the fore. Sheeran often speaks of himself as a devoted family man, though his two wives and children occupy a mostly peripheral place on screen. Anna Paquin makes the most of a largely dialogue-free role as Sheeran’s daughter, Peggy, whose disapproval of her father’s criminal life leads to estrangement. Then there’s the recurring superimposed text that notes the eventual date and manner of death of a number of peripheral characters, even as they’re standing flush before us. (Another older statesman, Marco Bellocchio, did something similar in this year’s The Traitor, the filmmaker’s terrific biopic about Sicilian mafioso turned informant Tommaso Buscetta.)

Scorsese’s choice, in many of these early scenes, to expensively and time-consumingly de-age his principal cast members with digital technology has the strange effect of making Sheeran’s recollections seem that much more like an idealized fantasy that cannot hold. The technical showboating—softening and erasing wrinkles, making flaccid skin seem taut—is subtle enough to not be mortifying, yet apparent enough that the CGI stitching tends to show, especially in brighter scenes. It also plays rather potently meta, since The Irishman gathers a murderer’s row of American acting elites—not only De Niro and Pacino, but Joe Pesci (as Sheeran’s mentor Russell Bufalino) and Harvey Keitel (as Philadelphia-based don Angelo Bruno)—three of whom Scorsese has worked with multiple times over his very long career.

De Niro and Pacino, meanwhile, have a titan-like history that includes just a few on-screen collaborations, some epochal (Heat), some decidedly not (Righteous Kill). The two actors have additionally reached a point where bellowing self-parody and resting on laurels is de rigueur, the hope of a blazing last hurrah dissipating with every humdrum SNL appearance or cringe-inducing travesty like the “Dunkaccino” segment from Jack and Jill.

Scorsese knows what his audience is hoping for: glory days, resurrected. But he also understands the impossibility of anyone being exactly as they once were. So he weaves that longing into both The Irishman’s text and its technique, presenting Sheeran’s youthful recollections—his rise in rank with Bufalino’s crew, his work with a beleaguered Hoffa during the era when Attorney General Robert Kennedy (Jack Huston) worked hard to bring down organized crime—as augmented hoodlum reveries that will soon catch up with the character’s spiritually impoverished present. And this eventual shift is hinted at by a parallel narrative, snippets of which we see throughout the film’s first two hours, in which a much older Sheeran and Bufalino take a hilariously roundabout road trip, chain-smoking wives in tow, to a wedding that’s being used as cover for Hoffa’s murder.

This becomes the main story thread in hour three, and it features what should rank among Scorsese’s greatest set pieces as Sheeran comes to terms with and carries out Hoffa’s killing. It’s a sequence that’s austere in tone and approach (with one swaggering segue into goofball, semi-improvisatory humor), yet also unbearably tense and emotionally devastating. De Niro expertly sketches the moral bottoming out of an immoral man (his mumbly, halting call with Hoffa’s wife after the deed is done is a particular highlight), and it’s thrilling to see him so engaged. Pacino is no less impressive as the volatile Hoffa , so stubborn in his need to hold onto the presidency of the union that he built from the ground up that he’ll heed no warnings to the contrary about the degree to which his conduct may court disaster or death.

To Sheeran, Hoffa is like a king with his head in the clouds, or a spouse who just won’t listen to reason. The platonic romanticism of their relationship—sharing the same hotel rooms, exchanging yearning glances or gentle compliments even in their most explosive moments—is one of The Irishman’s most intriguing facets. Scorsese is no stranger to chaste, if still devout, love stories between men, and when Hoffa exits the film, Sheeran becomes like Orpheus minus Eurydice, mourning his beloved and yearning for the inevitable—though, of course, he’d never admit that his feelings were anything beyond strictly professional.

The ultimate tragedy of The Irishman is that Sheeran is incapable of singing his song of self with the kind of unblinking honesty that might lead him through regret and toward redemption. Near the end of the film, Sheeran asks that his door be left slightly ajar, a mirror of something that occurs in an earlier scene between him and Hoffa. The way Scorsese photographs Sheeran through the opening reveals a man drained of all his perceived power, and distressingly content with the unholy mess he’s left behind.

The 4K transfer of The Irishman looks and sounds incredible, with a greater wealth of texture than Netflix’s presentation—a contrast that speaks to the continued value of physical media. Rodrigo Prieto’s cinematography is ravishing, a feast of subtly varied autumnal hues that are occasionally punctuated by the bright, primal color of, say, a street sign or an ice cream sundae. (The visual differentiations between the decades are also more prominent here.) Clothing textures, and there are thousands of intricate, memorable costumes in the film, practically burst from the screen here, and facial details, especially those that haven’t been de-aged, are equally vivid. The Dolby Atmos track is a show pony, as this epic film is a tapestry of song cues, violence, and, most importantly, of the small vocal inflections of men of violence who speak in innuendo. The Irishman is, above all, a chamber piece, and every nuance of speech resounds with crystal clarity, transforming the audience into voyeurs and detectives.

The highlights here are “Gangsters’ Requiem,” a visual essay by critic Farran Smith Nehme, and the “The Wages of Loyalty” liner-notes essay by critic Geoffrey O’Brien. Nehme examines The Irishman as a thoughtful culmination of Martin Scorsese’s gangster cycle, while O’Brien likens the film to a poem, describing its intricate grasp of character portraiture and behavior, as well as its incredibly assured time-hopping structure. The other featurettes tend to repeat themselves, though none of them are without interest. “Making The Irishman” is superior to most such promotional items because the filmmakers and actors discuss the production with refreshing specificity. It’s said, for instance, that Scorsese wanted the film to “look like nothing,” a mysterious request that hints at The Irishman’s deceptively austere compositions.

A roundtable conversation over drinks with Scorsese, Robert De Niro, Al Pacino, and Joe Pesci, which was available on Netflix last year, is mostly predicated on the correct assumption that audiences want to hang out with these legends, offering little new information about the making of The Irishman. Though it’s only six minutes long, “Anatomy of a Scene: The Irishman,” part of a series shepherded by New York Times staff editor Mekado Murphy, is more illuminating, offering a glimpse into the motivations behind the Frank Sheeran “appreciation night” scene. Rounding out the package is a featurette (also produced by Netflix) on The Irishman’s controversial de-aging effects, a few trailers, and archive footage of the real Sheeran and Jimmy Hoffa, which directly informed certain scenes in the film.

Criterion’s exacting presentation of Martin Scorsese’s late-inning masterpiece is a testament to the enduring value of physical media, ironically given that the film is a Netflix title.