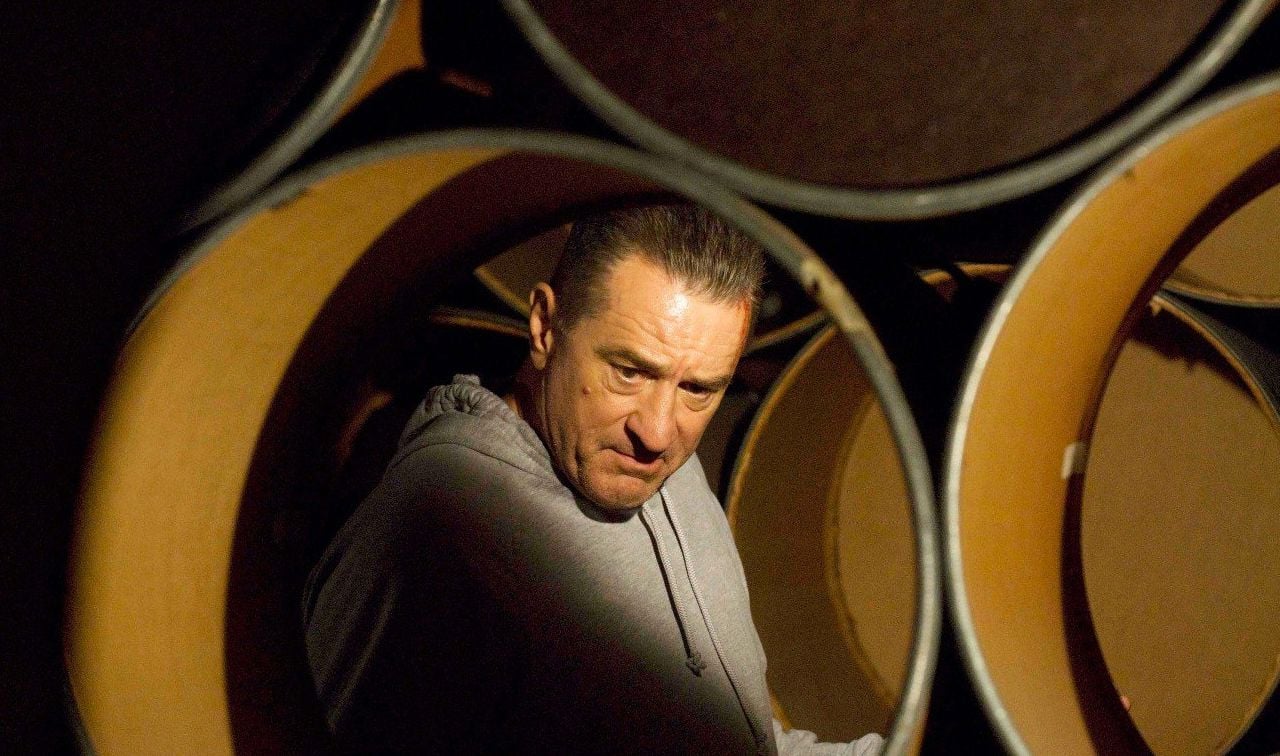 “They’re like Lennon and McCartney,” opines a cop after questioning detectives Turk (Robert De Niro) and Rooster (Al Pacino), an overt, trailer-ready reference to the legendary actors whose pairing in Righteous Kill is supposed to validate this police-doing-naughty-things saga as great drama. At this saggy point in their illustrious careers, however, De Niro and Pacino seem less like Beatles and more like Monkeys, and their third tag-team effort (their first since Michael Mann’s 1995 Heat), written with plentiful clichés and gussied up with scads of shoddy aesthetic touches, is a shambling, shoddy stab at grappling with the issues of its most direct (and, at one point, referenced) predecessor, Dirty Harry. Screenwriter Russell Gewirtz’s story is a thing of lightweight—and, given its stance toward its less-than-honorable protagonists, also predictably hypocritical—vigilante moralizing which strives to achieve gravity via the mere presence of its leads, a strategy doomed to fail considering that De Niro and Pacino have long since sullied their legendary ‘70s cinema-cemented reputations by deteriorating into broad self-caricature.

As lifetime partners on the force, De Niro is the unstable raging bull and Pacino is the erudite sly dog, the two listlessly slipping into their customary personas for this tale of a pseudo-serial killer investigation. As implied by the confession that frames the narrative (which is peppered with statements—“Most people respect the badge, everyone respects the gun”—that fall woefully short of the profundity to which they clearly strive), the villain is actually Turk, whose disdain for watching guilty cretins walk free has led him to exact lethal justice on his own terms. (Spoiler herein.) Yet because there’s no mystery to this initial setup, it obviously follows that an upend-expectations climactic revelation lies in wait, and in fact that said twist must involve Rooster. Consequently, dramatic tension begins at zero and then remains constant, with the proceedings quickly devolving into a spectacle of squinty-eyed De Niro hostility, cool-cat Pacino posturing, and a host of recognizable faces (Carla Gugino, 50 Cent, John Leguizamo, Donnie Wahlberg, Brian Dennehy) gamely struggling with sub-par material in exchange for an opportunity to trade barbs with revered icons.

Unlike Heat, which cannily amplified tension by keeping the stars apart, De Niro and Pacino here share countless scenes together but don’t develop anything more than a clichéd cop-duo rapport, due in part to an ungainly script light on taut sequences and overstuffed with clunky red herrings—like De Niro giving bad-girl lover Gugino the rough sex she needs, which means he must be a violent nutcase!—that are made more graceless by Jon Avnet’s direction. As he did in the abysmal 88 Minutes, Avnet incessantly punctuates the action with grainy flashback cutaways and herky-jerky cinematographic effects that further exacerbate the inelegance of his mise-en-scène, which favors extreme close-ups that do less to express thematic undercurrents than merely spotlight wrinkles and shine a harsh light on its phoning-it-in headlining performances’ lack of subtlety, nuance or resourcefulness. “Habits can be broken,” asserts Gugino’s crime scene investigator, but in light of De Niro and Pacino’s blunt, lackluster from-the-archives routines, Righteous Kill confirms the opposite: given enough time, habits not only endure, they become you.

From The Top: The Movie-Going Public, Take 2—On the Role of the Film Critic