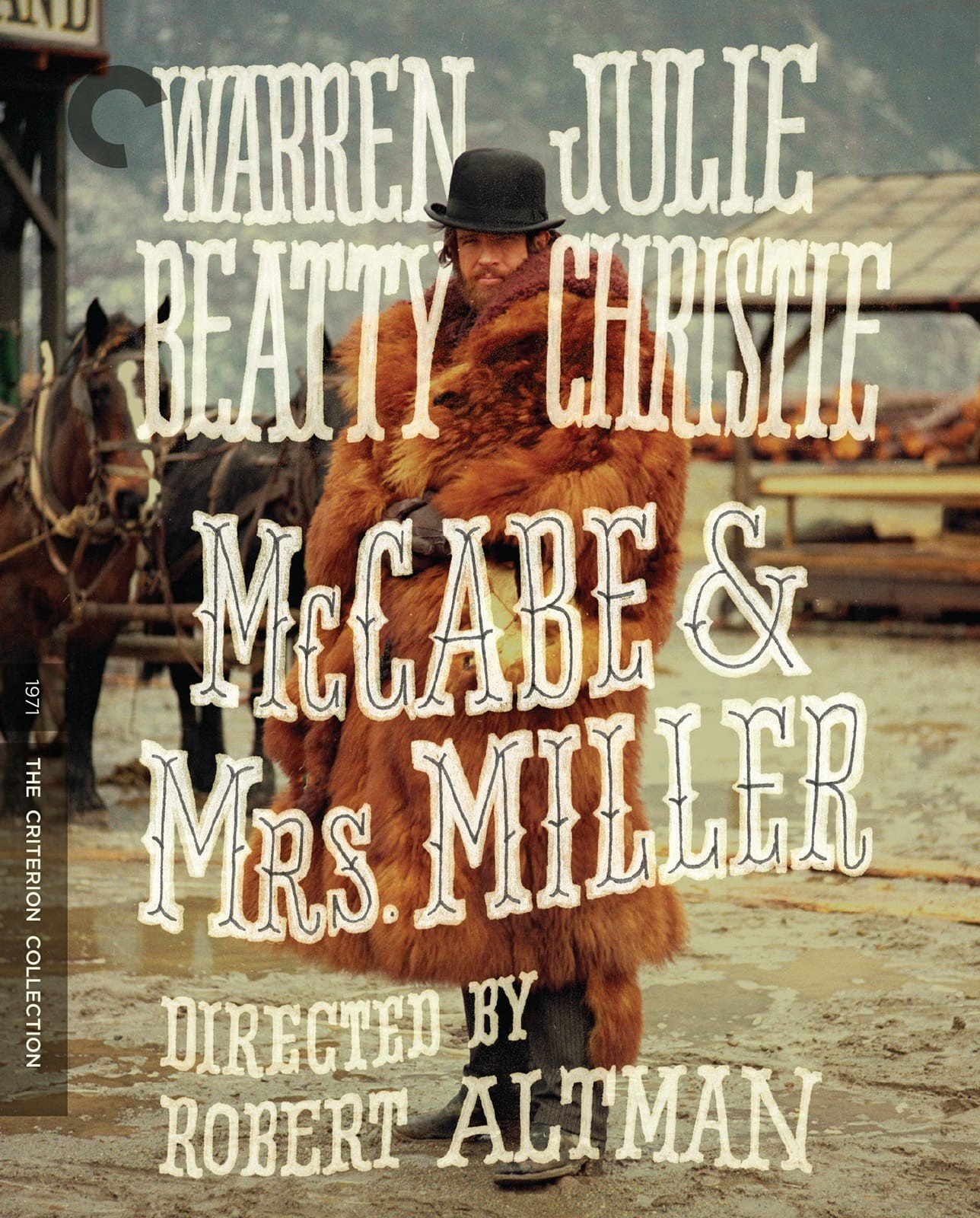 There isn’t a conventional sound or image to be found in Robert Altman’s McCabe & Mrs. Miller, which exhilaratingly upends the audience’s senses, engaging one in a free-floating fashion that’s more in sync with the emotional effect of art with less intermediary filters than cinema, such as theater and live music. When McCabe (Warren Beatty) enters a bar in the early 1900s-era town of Presbyterian Church, stirring up the locals with his man-of-mystery routine, the filmmaker doesn’t drop accommodating and insidiously distancing breadcrumbs for the viewer, framing images so that they telegraph precise and unsurprisingly expository information.

Instead, this and other potentially standard-issue western scenes are charged with a jazz-like pulse of controlled spontaneity that would become an Altman trademark. We know as much as the baffled bar denizens, and we’re encouraged to sort the setting and the protagonist out for ourselves. Cinematographer Vilmos Zsigmond’s camera prowls the bar for 10 minutes, surveying the locals in scruffily prismatic tableaus that are accompanied by absorbingly muffled and ambiguous noises, before we even hear McCabe’s name, and then it’s in passing and possibly a case of mistaken identity.

Named after the church that’s erected in the center of town throughout the film, establishing a resonant demarcation between sin and conventional commerce (the whorehouse is on one side of the church, the store and bar on the other), Presbyterian Church is visually defined as a place cut out of the wooded state of Washington, existing in a bowl of land and wood and rock. Compared to the obliging alternation of wide shots, medium shots, and close-ups that comprise most films, McCabe & Mrs. Miller’s compositions seem to be too close in on the characters, reveling in the nits and grits of their hair and beat-up clothes, which often obscure the particulars of their identities. Or the camera might seem to be too far away from the action, offering topsy-turvy landscape shots that accentuate the labyrinthine geometry of the dirty, slushy woods and buildings. But the town is ultimately a coherent creation, as we feel as if we could map it out and discern much of its political infrastructure.

The film’s power springs from its destabilizing mix of precise portraiture and epic scale, ugliness and beauty, cynicism and wide-eyed optimism. Moments of transcendence arise with disconcerting casualness, as the narrative is a vase that holds multitudes of smaller stories of nearly equal stature: An intimate bath is shared between newly arrived whores, and Altman regards them tenderly as they splash and play in water that moves in subtle slow motion, finding a moment of grace and camaraderie among the stifling lack of privacy that’s inherent in their trade. There’s an astonishing shot of Mrs. Miller (Julie Christie) when she first propositions a partnership with McCabe for his bar and whorehouse, looking out at the town through the window of his skeletal establishment, her head poking out while her body remains in the hollow structure. She seizes a moment for herself, her head seemingly floating in the sky, perhaps sensing and discarding the doom she’s conjuring.

Transitionary passages serve as wellsprings of operatic exaltation, such as when McCabe rides back to Presbyterian Church with his first group of whores as Leonard Cohen’s “Sisters of Mercy” reaches its chorus on the soundtrack, while the sun peaks at its magic hour, dotting the stark terrain with heavenly watercolor light. This moment is rooted in character as well: We intuitively grasp McCabe’s weird naïveté, as he exploits people with an almost childlike sense of glee, simultaneously earning our contempt and admiration. When Mrs. Miller flees her room in the middle of the night, as her and McCabe’s business is imperiled by our country’s rigged über-capitalist machinations, she descends a rear external stairway that Altman and Zsigmond render a noir-ish blue and red tunnel of fear and desperation.

Yet it’s evasive to discuss McCabe & Mrs. Miller merely as a series of haunting flourishes, as it always is when considering Altman’s work. The brilliance of his filmography resides in its mysterious majesty—in how his inspired individual decisions, intuitive yet relatively straightforward in isolation, cumulatively yield something beyond the sum of their considerable parts. One returns to painting and music to establish proper contextualizing corollaries, as they tap emotion within us that can’t be entirely tethered to experience and perspective. Altman called himself a painter, and the word applies not only to the craftsmanship of his images, but to their bottomless figurative nuance.

The image of McCabe as he’s buried by a snowstorm—by, essentially, the gods—is primordial and timeless. And Altman nearly tosses it off, having confidence in his almost peerless command of his medium, following it with another image for the ages: of Mrs. Miller drifting away hopeless in an opium-induced stupor, perhaps discovering that her adventure with McCabe was a glorious daydream. Mrs. Miller doesn’t awaken so much as resign herself to a less disruptive nightmare, one which isn’t at war with the fates of big business. In one of the greatest of all films, Altman taps into a pipeline beyond himself, beyond us, beyond juxtaposition of theme and formality, achieving something that’s chased by all artists of all kinds: rapturous poetry.

The image boasts a great sense of depth, contrast, and clarity, particularly in certain scenes set inside McCabe and Mrs. Miller’s brothel, which abound in surprising blues and reds that have been less pronounced in prior presentations of the film (including prints shown at the Library of Congress). Browns are varied and multifaceted, blacks are rich, and the whites are spectacularly luminescent. Image detail is superb, allowing one to parse the specificities of the wardrobes and settings that subtly define the characters. Facial hair, which functions as a kind of mask in this film, also comes through with newfound vividness. The boldest touch of this image may be the brightening of certain scenes, especially daylight landscape compositions and interiors, which expands an awareness of the backgrounds of compositions while expanding color spectrum. The mono soundtrack offers a tactilely immersive mix that’s similarly revelatory, as it’s now easier to parse and discern the painstakingly achieved tapestry of minute aural detail, whether it pertains to muttered dialogue or the mechanic sounds of a train chugging up the mountain top. And Leonard Cohen’s legendary voice resonates with deep bass-y grandeur. This is a beautiful restoration.

The 2002 audio commentary with Robert Altman and producer David Foster offers an essential portrait of film direction as an art born of countless minute choices, which is affirmed by the new making-of documentary—shot specifically for this edition—that interviews many of the actors and craftsman involved with the production. In both features, Altman is familiarly painted as an adventurous man given to trusting his intuition, whether advising Keith Carradine to cut his hair, or sticking with a handful of Leonard Cohen songs for the soundtrack, despite the anachronism of their presence in a narrative set in 1900. (Altman is shown to have an extraordinary bullshit detector for which flourishes will and won’t “play.”) The new conversation between film historians Cari Beauchamp and Rick Jewell includes an astute discussion of the film’s often reductive classification as an “anti-western,” and a variety of older odds and ends round out a diverting package. Most notable are archival interviews with cinematographer Vilmos Zsigmond and episodes of The Dick Cavett Show featuring Altman and film critic Pauline Kael, who remains one of the most influential admirers of McCabe & Mrs. Miller and Altman in general. One could carp and ask for more new material exploring aspects of the film that are less treaded upon, but that’s essentially nitpicking.

Criterion offers a correspondingly bold and beautiful transfer of one of the most astonishingly fragile and intuitive of all American movies.

Blu-ray Review: Richard Linklater’s Boyhood on the The Criterion Collection