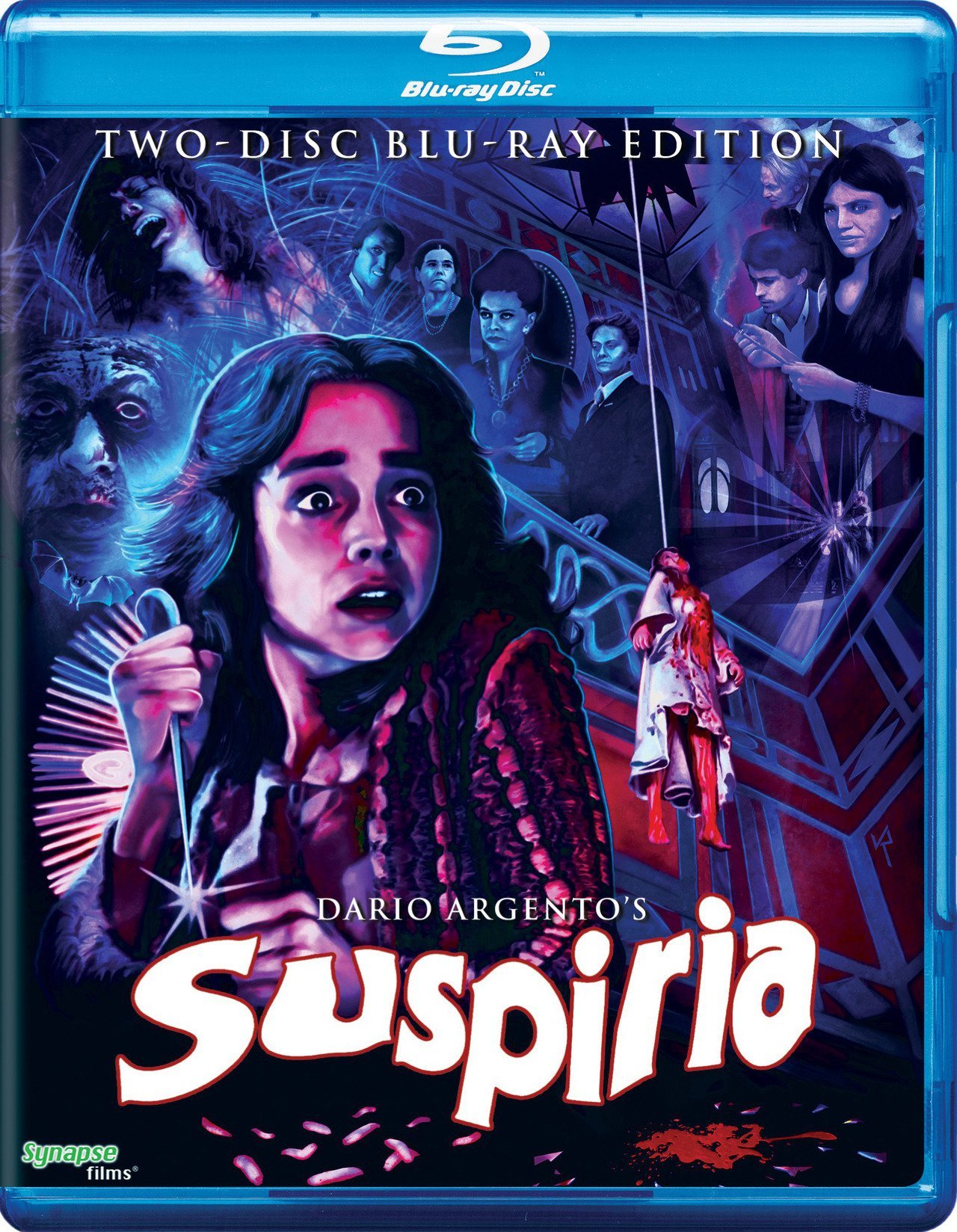 In the giallo, as practiced by masters such as Mario Bava and Dario Argento, there’s an amoral yet almost joyful grasp of death as simply being a matter of aesthetic. The blood in these films is intentionally fake—gorgeous, garish paint that exists as another hue to complement the explosion of colors that define the giallo’s often extraordinary set designs. When a character splashes red wine all over a porcelain sink in Suspiria, Argento highlights the similarities between the drugged drink and the blood that splatters robustly throughout the film. It’s a joke on the nature of the giallo, linking violence to consumption, a sensual intertwinement that also leads inevitably to sex.

Suspiria is set in a dance academy in Germany, but Argento makes little effort to eroticize the dancers while they’re living, and they’re pointedly denied sex lives. The hallmarks of films concerned with perfecting dance—the scenes in which we see dancers dancing—are almost entirely elided. We see the American protagonist, Suzy (Jessica Harper), dancing once, and she becomes ill and is rushed out of class. Argento is more concerned with the architectural specifics of the academy, which is rich in labyrinthine hallways awash in explosions of red, blue, green, and black, dotted with malevolent mirrors and windows that suggest eyes as well as portals into other dimensions.

Suspiria is the ultimate horror film as baroque-rock concert. Retrospectively, it doesn’t feel negligible that it was released a few years after The Rocky Horror Picture Show and in the same year as Low, the first album in David Bowie’s Berlin trilogy. All three works bridge cinema and music while mining the hangover setting in from the debauchery of reactionary 1970s-era politics and counter-reactionary urban night life. There’s a sense in all three works of sex as having gone bad or having at least twisted itself beyond even the understanding of the inherently twisted—of revolutionaries being unable to grasp the power of primordial fascism. The German settings of Low and Suspiria aren’t incidental. As exuberant as Dr. Frank N. Furter can be in his transgressions, his actions nevertheless exude a whiff of desperate over-compensation. True to its title, Low is about the weirdly qualified beauty of bottoming out, while Suspiria similarly mines an eroticism of annihilation.

Regarding the prestigious Tanz Dance Academy’s luridly colored hallways, the audience may feel as if it’s looking at a building that’s set inside of a giant human heart that happens to house a gallery of classic and modern art. With all of Suspiria’s hallucinatory excess—including dizzying levels of prismatic imagery—one never quite knows where to look, which produces an anxiety in the audience that parallels Suzy’s mounting terror. These sets blend German expressionism with the neurotic Technicolor passion of films like The Wizard of Oz and The Red Shoes. Suspiria’s influence on other filmmakers is also difficult to overstate: A shot of curtains moving supernaturally behind Suzy has the velvety tactility of the curtain imagery in David Lynch’s productions, and the highly controlled mixture of found buildings and fastidious set design bring to mind the architectural formalism of Wes Anderson.

In death, however, the dancers are allowed to bloom. In one of the most beautiful and disturbing murder scenes committed to film, Pat (Eva Axén) is pulled through a bathroom window and stabbed repeatedly with a knife while atop the stained glass sunroof of an apartment complex. Characteristically of Argento, the building suggests an Art Deco theater of ultraviolence, and Pat’s murder virtually offers a pun on the phrase “danse macabre.” Before she’s lynched and thrown through the sunroof, her face is shown to be smeared in red lipstick that complements her blood-splattered body, and curled into an expression of terrifying, orgasmic ecstasy. In destruction, she finds freedom from the limitations of corporeality—becoming the sort of art object which dancers attempt to render themselves. The witches running this academy are true to their promises of allowing the dancers to perfect their craft.

Suspiria’s murder sequences also revel in the traditions of dance and rock music. Each killing is accompanied by Goblin’s equally elaborate synth score. The killings serve as choruses within the film, while the preceding stalking in hallways and deserted courtyards suggest musical bridges. Imagery and sound are intricately linked, as the killings are chopped into hard fragments of incident, while the stalking is rendered in sensual tracking shots that gradually build to the catharsis. And the music is always with us, particularly the sounds of cooing and sighing that suggest that the very film itself is alive and breathing. (“Suspiria” is Latin for “sighs,” as this film was partially suggested by Thomas De Quincey’s 1845 essay “Suspiria de Profundis.”)

Suspiria is overwhelming in the breadth and intensity of its aesthetic, offering a radical departure from the sporadic surreality of Argento’s prior gialli. The aesthetic weds with the irrational and sketch-like narrative to fashion an abstract horror film that’s more closely aligned with A Page of Madness than with the American slasher genre that arose in the 1970s, partially in response to Argento’s early films. Argento plunges the audience into Suzy’s fragile consciousness, painting a rich and bottomless tapestry of fear.

Synapse Films’s 4K restoration of Suspiria’s original uncut, uncensored Italian 35mm camera negative—with color correction supervised and approved by director of photography Luciano Tovoli—has been under discussion in cinema circles for a while now. This transfer is an obsessive labor of love, a miraculously dense and beautiful work of historical preservation. Younger audiences seeing Suspiria for the first time, and accustomed to beautiful Blu-ray releases on a weekly basis, may take this disc for granted, but those of us who’ve suffered through butchered, severely letterboxed prints of Argento’s film will understand the gift that Synapse has imparted.

Colors are not only breathtaking, they’re viscerally present in the film as additional characters. This is evident in the scene when the dancers camp out in another part of the academy and Suzy hears a story while an imposing woman sleeps behind a sheet in the background. The sequence is bathed in red, and we can discern rich, sensual variations of the color while making out the minute, poignantly uncertain expressions on Suzy’s face. Every scene boasts this degree of detail, from the dust that can be seen floating in the hallways to the sharp white glare emitting from a magical totem. Flesh tones are supple and disconcertingly sensual, and there’s a pleasing hint of grit and grain, despite the sharp clarity of the image.

The soundtracks are even more revelatory, imbuing Suspiria with an immersive soundstage that hasn’t been equaled by prior home-video editions. These mixes, an English 4.0 and an Italian 5.1, emphasize the constant sense of sound in the film, from the light treading of footsteps to the subtle cooing and gurgling of the score when it’s in relative repose. As someone observes in a supplement, it’s often difficult to sort the diegetic effects from the non-diegetic, which provokes another kind of anxiety on the part of the viewer. This distinct lack of distinction has been painstakingly preserved here, and the big flourishes of the Goblin score are the saber-rattling triumphs that they’re supposed to be, even on less elaborate home-video systems.

As crazy and seemingly in its own headspace as Suspiria seems to be, it was researched and deeply rooted in history, literature, and contemporary pop culture. These supplements thoroughly parse Dario Argento’s various influences, from his obsession with modern art, witchcraft, and Snow White and the Seven Dwarves to his collaboration with his co-writer and lover Daria Nicolodi, who appeared in Deep Red. The two audio commentaries parse the film’s symbolism on a scene-by-scene basis, especially the one with authors and Argento scholars Derek Botelho and David Del Valle, which is the better of the two tracks. Both the 30-minute visual essay “Do You Know Anything About Witches?”—written, edited, and narrated by Michael Mackenzie—and “A Sigh from the Depths: 40 Years of Suspiria” offer sturdy broad-strokes recollections of the film’s inception, including discussions of Argento’s fascination with the “Magic Triangle,” a geographical point where France, Germany, and Switzerland meet, and which is supposed to be a fount of black magic. Meanwhile, “Suzy in Nazi Germany” provides a succinct, piercing analysis of the German monuments that appear in the film, most chillingly a courtyard where books were burned at a Nazi rally. An interview with star Barbara Magnolfi elaborates on Argento’s collaborations with actors, and other odds and ends round out an affectionate and detailed package, including alternate opening credits sequences and a variety of theatrical trailers and TV and radio spots.

Synapse Films’s restoration of Suspiria is revelatory and head-spinning, essentially serving as a portable guided tour of a decadent horror museum.