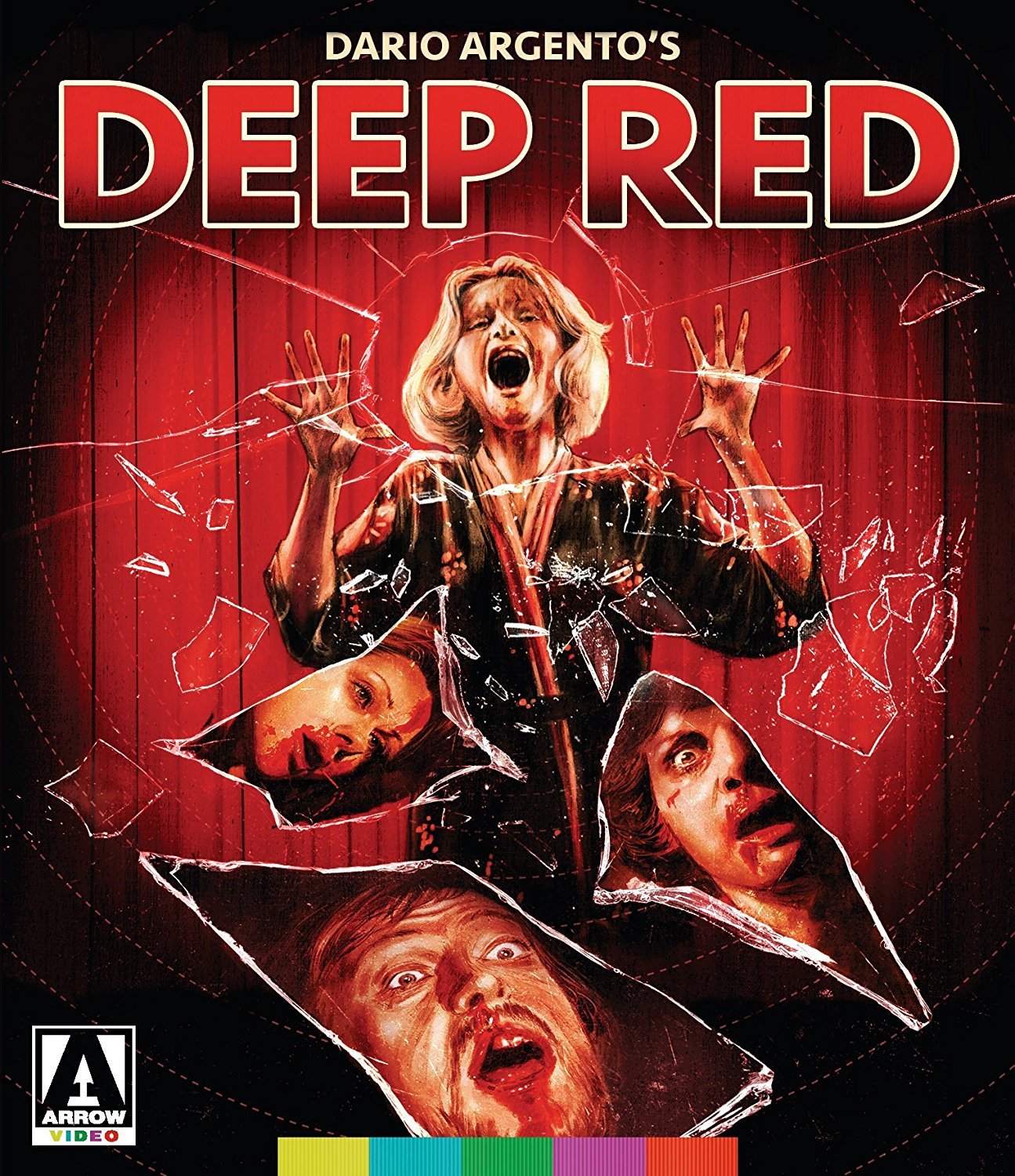 Early in Dario Argento’s Deep Red, jazz musician and teacher Marcus Daly instructs his class to play their instruments with less control, implicitly urging them to embrace the sensual disreputability of art. Given that Marcus is played by David Hemmings, the star of Michelangelo Antonioni’s Blow-Up, one wonders if Argento is having a little joke at Antonioni’s expense. Antonioni is a highly controlled artist, fashioning films that are mysterious yet clearly the work of intense preparation, which strikes his detractors as hermetic and airless. Argento is also a control freak, but he’s capable of shaking things up—with lurid gore and blasts of rock ‘n’ roll and sexual comedy. It’s as if Argento were saying that his Italian compatriot should embrace cinema’s seamier side.

Marcus’s critique of control isn’t merely a joke on Argento’s part, as it signifies a guiding theme of Deep Red, Francis Ford Coppola’s The Conversation, Brian De Palma’s Blow Out, and other films inspired by Antonioni’s radical art thriller. In these productions, men are lonely tinkerers and artist types who’re estranged from society, particularly from women. One may be tempted to cite Hemmings’s character from Blow-Up as an exception to this observation, as the man seems to have fun with the models that he photographs, but there’s little sense of sensuality or connection in his trysts. Locked up within their heads and eaten up by the minutiae of their professions, the protagonists of these films attempt to extend the control that they enjoy in their careers into the outside world. The men become informal detectives, trying to solve mysteries that pivot on attempts to save or scrutinize beautiful women, and are brutally humbled by a terrifying realm that resists such rationalization.

On the surface, Deep Red appears to be more beholden to the obligations of its genre—the giallo—than Blow-Up is to the classic murder mystery. Deep Red has several astonishing murder sequences, and a solution is provided to its central mystery. But Argento, like Antonioni, allows the audience to discern a gaping maw of chaos lurking underneath the images. Each of Deep Red’s compositions reveals new meanings upon each viewing—and so it’s no wonder that yards of essays have been written trying to get to the center of this film. Certain effects are beautifully, if ostentatiously, achieved, such as a shot of a bar in a piazza that brings to mind Edward Hopper’s Nighthawks. Other textures, however, are subtle and insidious, such as Argento’s most brilliant flourish: hiding the murderer, right after a killing, right in front of us. (De Palma would borrow this formalist coup for Dressed to Kill.)

In Deep Red, Argento marries a cinematic world that’s empty on the surface—rife with surrealistically underpopulated cityscapes—and teeming with neuroses and subterranean evil. The exteriors contrast with the fetishistic bric-a-brac of the interior settings, and with the narrative’s endless reliance on things—paintings, drawings, rooms—that are buried underneath layers of civilized varnish. Seeing in the film is misunderstanding, and Argento viscerally tethers the audience to Marcus’s panic and confusion.

The film brings several plot strands into collision. Marcus is a British man teaching in a conservatory in Rome after a long stint in America, and seems to do little else apart from tenderly lecturing a friend and fellow pianist, Carlo (Gabriele Lavia), on his self-loathing and alcoholism. After such a conversation, Marcus witnesses the lurid murder of Helga Ulmann (Macha Méril), a psychic who gleaned evil thoughts from someone in the audience of her show earlier in the night. Marcus tries to solve the murder, involuntarily teaming up with a reporter, Gianna Brezzi (Daria Nicolodi). Meanwhile, the killer conducts a parallel investigation, snuffing out potential informants before Marcus and Gianna can question them.

All of these threads are informed by repression. The killer is threatened by Helga’s inadvertent stirring of the past, just as Marcus is threatened by Gianna’s power and forwardness. Surprisingly, Marcus is reticent about sleeping with Gianna, as the notion of men not being up for sex is rarely touched on by pop culture. It’s been speculated that Marcus is gay, which Argento has denied, though the filmmaker goes to great lengths to rhyme Marcus with Carlo, who also feels threatened, as his misery is revealed to be rooted in his closeted sexuality.

Besides being musicians, both Marcus and Carlo are lonely and frustrated with their art, and both are directly connected to the killer. In an early sequence, both men are positioned on opposing ends of a symmetrical image of a courtyard, conversing while wearing black-and-white suits that function as inverses of one another. (In his audio commentary included on this release, Thomas Rostock interprets this motif more straightforwardly, suggesting that Marcus and Carlo are doppelgangers reflecting to one another lives not lived. More provocatively, Rostock suggests that Marcus is Antonioni, the respected bourgeoisie artist, while Carlo is Argento, a man fashioning art for the masses.)

Deep Red’s nesting symbols have been planted with a delirious sense of emotional logic. The murder scenes complement and anticipate one another in myriad fashions, and are informed with a piercing loneliness that’s disturbing and moving. In Deep Red, when a woman is nearly drowned in a bathtub of scalding water, she collapses onto the floor and attempts to write the identity of her killer in condensed steam on a mirror. Argento lingers, with rapturous calm, on the woman’s outstretched finger as she tries and fails to make this final clarifying gesture before dying. Worthy of Antonioni, this sequence exudes an existential power, standing in for all the fruitless tasks that govern our lives as we gradually approach death.

The ultimate fruitlessness, in Argento and Antonioni’s worlds, is to make sense of anything. Marcus and Carlo debate the limitations of perception, and Marcus misses pivotal clues because he shoehorns the mystery into his preconditioned vision of the world. If Marcus isn’t gay, he still shares with Carlo feelings of imperiled masculinity and is in denial about his bitterness toward women, which the killer re-channels toward the victims. Said bitterness spurs a disenchantment within Marcus that causes him to miss things; at times, he moves through life with the pregnant passivity of an Antonioni character. Marcus uncovers a drawing on a wall that reveals the answer to the mystery, but doesn’t chip away enough wallpaper to discern the whole story. Searching for another painting, he doesn’t discover until it’s nearly too late that he’s actually looking for a mirror. And Marcus only bests the killer out of dumb luck. Looking into a pool of blood—the film’s final tableau of skewed, bottomless perception—Marcus confronts how little he knows about himself and the world that contains him.

This transfer boasts much sharper and richer browns and blacks than previous editions of Deep Red, bringing out the film’s autumnal atmosphere. The reds have a vivid viscosity that hasn’t always come through in prior transfers, particularly in the curtains seemingly enveloping Helga’s head in a theater, which is perhaps the film’s most singularly poetic and terrifying image. Flesh tones are supple and finely detailed, and image clarity is exceptional without compromising the film’s grainy vitality.

The soundtracks are trickier and are helpfully contextualized by notes included in the disc’s menu screen. There are two Italian tracks, a monaural for purists and a five-channel for those looking for a more contemporary mix, as well as an Italian and English hybrid track. The film was shot in English, but a full English track doesn’t exist because Deep Red was shortened by 20 minutes for international audiences. (This export version, which significantly compromises the film, is included in this package on a second disc.) So, to watch the full-length Deep Red in English, which provides a fuller glimpse of David Hemmings’s underrated performance than the Italian editions, one must watch the cut scenes in Italian. Weirdly, this unusual cultural fusion further underlines the film’s obsessions with dualities, identity crises, and cultural skeletons in the closet. These tracks sound similar to these ears: deep, clean, with fastidious distinctions made between the diegetic and non-diegetic sounds, which is of paramount importance to a film that so precisely deconstructs itself, featuring a killer who provides her own soundtracks for her murders, suggesting an artist in her own right.

The audio commentary by filmmaker and Dario Argento expert Thomas Rostock is a consistently surprising, appropriately obsessive exploration of a film of endless cultural reverberations. For instance, parsing subtle visual symbols, the understanding of which partially depends on a considerable knowledge of vintage Italian cinema, Rostock makes a profound and convincing case for Deep Red as a parable of Italy’s fascist legacy. Throughout the commentary, Rostock dives deeply into imagery, sound, performance, and contextual history, providing an essential examination of a classic film. Complementing this commentary is “Profondo Giallo,” a new visual essay by Michael Mackenzie, who did a striking piece for Arrow’s restoration of Blood and Black Lace a few years ago. “Profondo Giallo” isn’t as intricately conceived as Rostock’s commentary, but it does an admirable job of thoroughly discussing an ambitious work within a concise running time. On the new end of spectrum, this package also includes a miniature poster, a beautifully produced booklet featuring new writing on the film by Mikel J. Koven and an archive piece by Alan Jones, illustrated with original archive stills, as well as a collection of lobby card reproductions that will be catnip for Argento nerds.

Rounding out the package are a number of archive interviews, the most interesting of which features Nicolodi, who co-starred in Deep Red and fell in love with Argento, eventually co-writing Suspiria. Nicolodi isn’t sentimental about her ex, describing him as an egocentric control freak and credit hog with intimacy issues—a film director in other words. The archive interview with Argento himself is disappointingly skippable, though the talk with Goblin member Claudio Simonetti offers some choice observations about the band’s roots in prog rock. A few other odds and ends, such as a tour of a gift shop partially shepherded by Argento, round out an enormous supplements collection that doesn’t quite clear the high bar set by prior Arrow packages, such as those for Blood and Black Lace and The Bird with the Crystal Plumage.

Review: Sergei Parajanov’s The Color of Pomegranates on Criterion Blu-ray