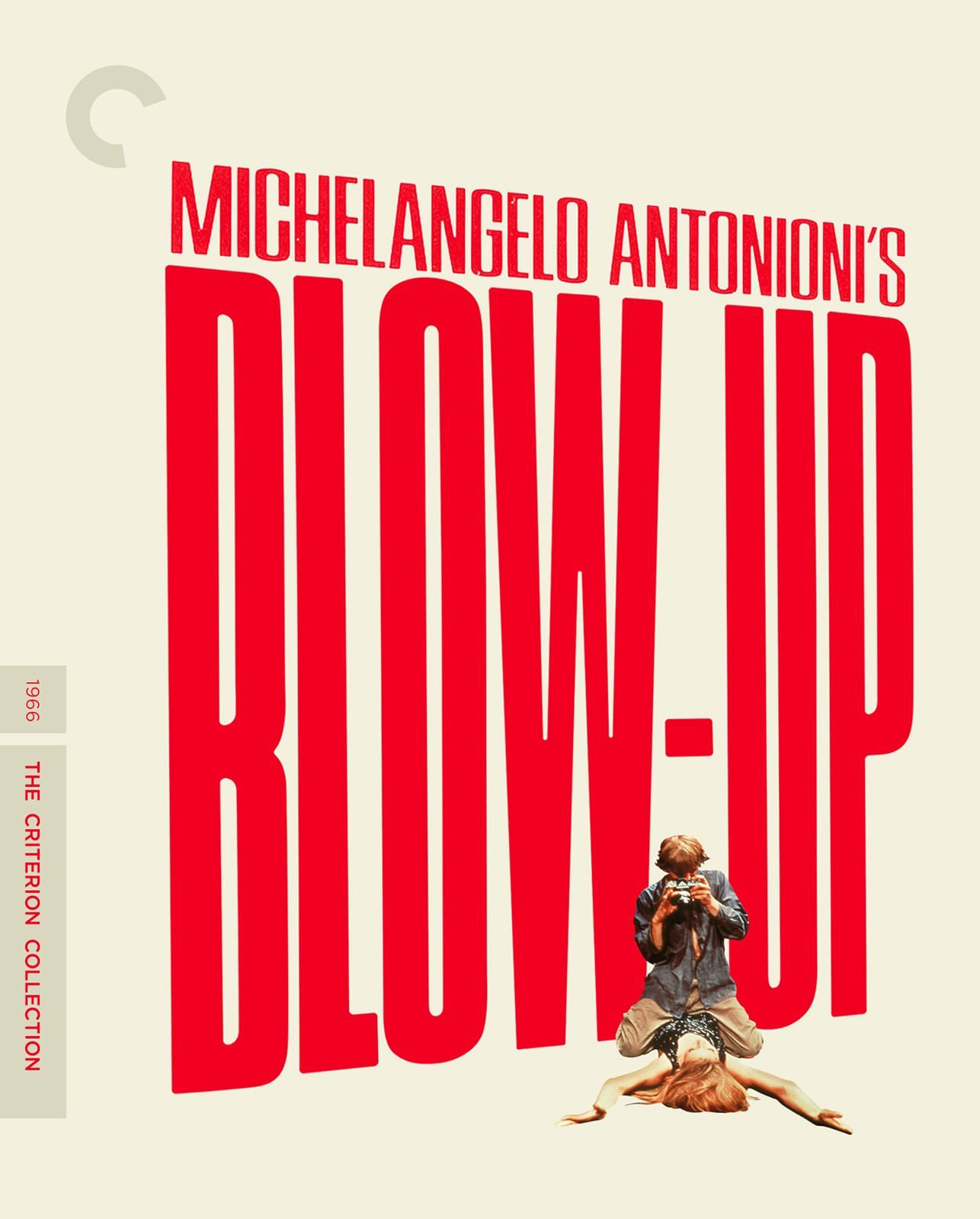 Michelangelo Antonioni’s films are driven by a mysterious, insular logic. When Blow-Up’s photographer protagonist, Thomas (David Hemmings), drives his sports car through a brown and dusty London streetscape that includes a brightly anachronistic blue building, one senses that Antonioni included the flourish pointedly, just as he purposefully included the red building that Thomas passes not long afterward. Are these buildings in the frame merely for their aesthetic value, or do they hold a deeper significance? Every frame in Blow-Up contains details that inspire these sorts of inquiries, suggesting worlds within worlds that are out of the audience’s reach, which parallel Thomas’s own eventual interrogations of his photography.

Antonioni purges filmmaking of much of its theatricality, emphasizing strands of cinematic DNA that have their roots in dance, painting, architecture, and photography, celebrating the power of negative space as a revealer of emotional texture. An Antonioni character might not appear to say much of consequence, but the way they move speaks volumes. When Thomas and Jane (Vanessa Redgrave) circle one another in the former’s bubble of a loft, he’s feeling her out for sex, while she’s manipulating him for the negatives he shot in Maryon Park (where she might have orchestrated a murder), Antonioni renders their confrontation almost entirely via hypnotic movements—of both camera and actors—that contrast their sensually corporeal essences with the gorgeously rigid geometry of the setting. All of Swinging London appears to exist in Thomas’s loft, which is an explosion of late modernist art, of photographs by esteemed artists like John Cowan, of backdrops and photographic tools and bric-a-brac, of sculptures and rafters that offer the frames color and forceful through lines, and of the latent sex that these elements collectively and separately conjure.

The film is an inquiry into what art gives humankind, into the modernist concern of what art is and how it affects life, changing or obscuring existence via its varying scrims. Antonioni, a celebrated Italian director making his first English-language film, seems to believe that the legend of Swinging London was a charade built on a wobbly edifice of marketing and self-mythology—and it’s a point of view memorably echoed by Hemmings in one of the archive interviews included on this disc. Antonioni’s tone isn’t judgmental, precisely, but it seems beyond the filmmaker’s capabilities to imagine that, say, a young, good-looking photographer might enjoy meeting and working with a bevy of the most attractive women on the planet.

It’s purposefully difficult to parse Antonioni’s pleasure-blindness from Thomas’s, and this ambiguity is most apparent in the astonishing sequence in the film where Thomas photographs his “birds,” who’re first seen emerging from an upper floor of his loft, glimpsed through plastic and resembling animate mannequins. Thomas positions the women, who’re each wearing a different style of wardrobe, into a series of beautiful yet dehumanizing tableaus that affirm the stereotype of models as zombies. Antonioni is aware of the frustration and pain of the women, who’re treated by Thomas with contempt, yet the scene is uncomfortably, restrictively schematic, particularly if one has seen the photos that Cowan took of these women during the shooting of Blow-Up. Through Cowan’s eye, the models are allowed to be eccentric, personable, evocative, gorgeous, and powerfully vulnerable and human. Antonioni doesn’t see nearly as much.

Relatedly, we’re barely allowed to glimpse Thomas’s fashion photography, as Antonioni only acknowledges the exploitation involved in its creation, denying its potential transcendence as a portal into its subjects’ lives. Thomas also photographs the poor living on the fringes of London, and Antonioni allows us to see those photos, though it’s never quite resolved as to whether Thomas is a frustrated crusader making money with what he sees as trivia or is a poser who feels the need to launder his exploitation with a nod toward social progressivism. Probably both. This contrast between the fashion world and the realm of the homeless is brought into implicit conflict in the potentially imagined murder conspiracy with which Thomas finds himself embroiled.

The brilliant central set piece follows Thomas as he blows up dozens of photographs of Maryon Park (the greenest and most eerily flat park in all of cinema), constructing an expressionist black-and-white horror documentary—truly an alternate world—in which bushes suggest a dark, perhaps demonic void. We unnervingly hear the cooing of the wind over these photos, suggesting Thomas’s efforts to recall the experience of standing on that open knoll. The more Thomas blows up the images, the less there is to see, as the visual information devolves into infrastructural nothingness. The metaphorical implication isn’t subtle: Perhaps there’s no “truth” for humankind to discern, only indecipherable mass that might accidentally suggest a pattern on occasion—or perhaps truth has been clouded by the intervention of media. Thomas’s cognitive efforts to turn photographs into documentary are dramatized with pans and non-diegetic sound effects that critique the insidiously accommodating nature of art, illustrating a constructive, subjective bridge between photography and filmmaking. (The theoretical murder sequence in the park omits precisely the information that we need without making a show of the ellipsis, tethering us to Thomas’s myopia.)

Blow-Up is moving and influential for the chasms it understands to exist between people, and for its perception of art as unable to bridge those divides. But the film is also weirdly idealistic, as art, for all its pitfalls, does awaken Thomas from his ignorant slumber. The possible murder in the park fulfills the intended function of modernism, highlighting the invisible constructions and frailties of society. Thomas, a complacent artist who probably sees himself as an iconoclast, finds his bubble popped by atrocity. Of course, atrocity has always been right in front him, as it’s always in front of us. By the end of the film, one wonders if he will be able to finally see the dying street people of his stark docudramatic photography. When the photographer disappears into the green grass, does he discover higher consciousness or annihilation? Does swinging London disappear with him?

This transfer subtly refutes the washed-out blah-ness of early home-video editions of Blow-Up, restoring pop-art vitality to the primary colors of the image, particularly the reds and blues, which emanate a real heat in this edition. Browns are also strong, whites are sharp and pleasingly devoid of glare, and skin tones are thoroughly detailed, most notably in the scene where Thomas romps in his loft with the two young women, whose very pours are vulnerably, tellingly detectable. Most importantly, there’s still a rough, gritty, grainy texture to this transfer, which is essential to a film that’s concerned with the very fragile material make-up of film and photography as extensions and documents of our malleable reality. Equally essential is the exacting soundtrack, which is so subtle as to require dozens of viewings to fully digest. The delicate, multi-planed subjectivity of the mix really comes through here, especially when Thomas is completing his photographic slideshow/film within the film, reimagining the minute rustling and whirring of an eerie park. Herbie Hancock’s exuberant score has been remastered with a pristine sense of individual instrumentation.

Superb even by Criterion’s standards, this supplements package provides an essential glimpse into the making of Blow-Up, analyzing its dense fabric of social and aesthetic references without placing the film in a reductive thematic box. Each feature has been fastidiously produced and selected to elaborate on complementing aspects of the film. The “Blow Up of Blow Up” documentary, produced last year, revisits many of the locations used for production, including the loft and Maryon Park, allowing collaborators such as Jill Kennington (one of Thomas’s models in the film) to discuss Antonioni’s methods as well as the London scene at the time. “Antonioni’s Hypnotic Vision” is a two-part piece that offers a phenomenal deep dive into the modernist art and photography that informed the film, coming to define its very formalist fabric. Phillipe Garner is particularly fascinating in this piece, discussing his obsessive hunt for Blow-Up photography in a manner that recalls Thomas’s own doggedness in the narrative.

Garner also interviews actress Vanessa Redgrave in another supplement, and while they have an awkward rhythm, Redgrave offers illuminating context as to how Antonioni directed actors like a “choreographer,” causing her to unexpectedly rely on her experience as a dancer. Archive interviews with actors David Hemmings and Jane Birkin provide further anecdotal texture, and both are upfront about their sometimes ambiguous relationship with the film and particularly with swinging London. The package is completed with a book that’s detailed and wide-ranging enough to justify its publishing apart from this Blu-ray, with records of the questions that Antonioni circulated to photographers as research (which are frequently referenced in the other featurettes), a perceptive essay by film scholar David Forgacs, an updated account of the film’s shooting by Stig Björkman, and the 1959 Julio Cortázar short story that loosely inspired the film.

A gorgeous restoration even by Criterion’s standards, with piercing supplements that manage to contextualize an essential film without smothering it with over-explanation.

Blu-ray Review: Hal Ashby’s Being There on the Criterion Collection