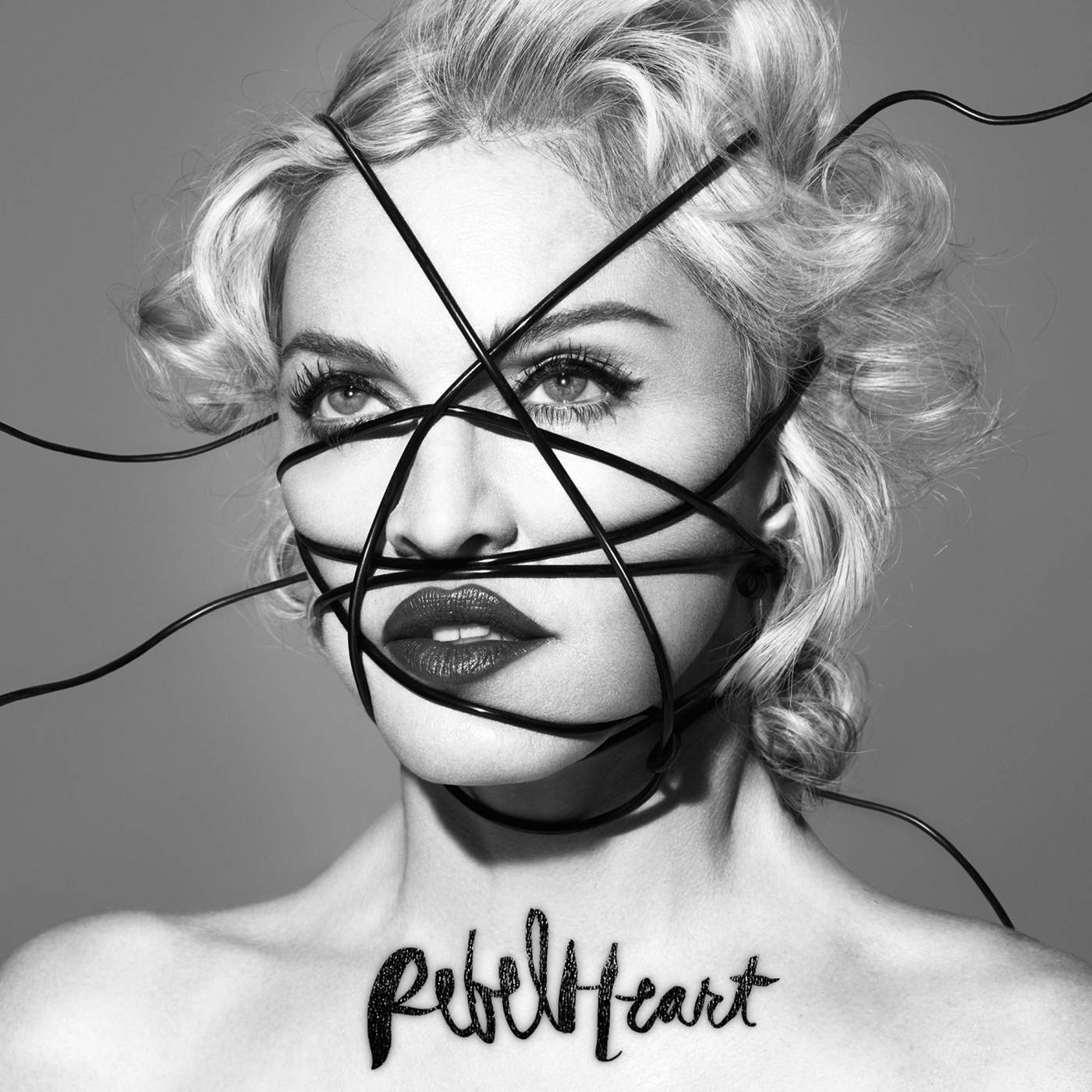 Perhaps more so than that of any other pop artist, living or dead, Madonna’s career can be handily split into distinct eras, and further subdivided into periods or phases: her commercial peak in the ‘80s, her provocateur years in the early ‘90s, her electronic renaissance in the late ‘90s and early aughts, and so on. It’s the evolution, or so-called reinventions, that these shifts represent that many wholly credit, erroneously, for the singer’s unprecedented longevity. But when the final history is written on one Madonna Louise Ciccone, with the benefit of distance and hindsight, it’s likely her career will be viewed in just two halves: the pair of decades leading up to and including 2003’s American Life, a 20-year big bang of ubiquitous, propulsive forward momentum that culminated in the deconstruction and rejection of the material world that created the biggest female pop star of all time; and the years that followed, which have found the queen uncertain about how to maintain her throne, often looking back rather than toward the future.

Case in point: Of her 13th studio album’s myriad pleasures are its numerous reminders of Madonnas past, from the ‘90s-house throwback of lead single “Living for Love” to samples and lyrical nods to “Vogue,” “Justify My Love,” and Truth or Dare. Madonna’s fans are as varied as her countless visual and sonic diversions have been over the years, and there’s a little something for everyone here, including those pining for a return to the lush, spiritual introspection of Ray of Light (specifically, on the exquisite “Wash All Over Me” and the regal “Messiah”). Madonna has always been ironically self-referential, repeating formulas and quoting past hits, but in recent years those winks and nods have seemed more like tics, the side effect of an artist who’s simply said and done it all, and whose effective banishment from an increasingly ageist radio industry has led her to believe she needs to remind us that, bitch, she’s Madonna.

There are moments throughout Rebel Heart where Madonna carves out new, exhilarating territory for both herself and mainstream pop at large. “Devil Pray,” perhaps her best song in 15 years, reimagines the Animals as a folktronica band with witch-house tendencies, her ruminations on salvation and the existential pitfalls of sniffing glue riding an unexpected low-end groove. Armed with an Arp bass synth, some barking alarms, and copious amounts of Auto-Tune, co-producer Kanye West (who’s also name-checked in the lyrics) gives “Illuminati” the Yeezus treatment, lending Madge’s treatise on the age of enlightenment a portentous industrial edge; her rapped verses about the titular secret society are clean and tight enough to make you forget about “American Life.”

Though less inventive, other songs, too, find Madonna exploring new sounds or revisiting them in novel ways, like the Eastern-flavored “Body Shop,” a reminder of how agile both her vocals and lyrics can be; as extended metaphors for sex organs go, the track is the clever, more sophisticated cousin to 2008’s crass “Candy Shop.” Espousing the power of art in a practical sense as a vehicle for change and a symbol of freedom, “Graffiti Heart” is what Artpop aspired to be. Drawing on Madonna’s connection to pre-fame friends Jean-Michel Basquiat and Keith Haring in order to authenticate the kind of inspirational anthem that only an artist who emerged from the rubble of Warhol and AIDS could, its personalized missive is far more effective than the more general platitudes of, say, “4 Minutes”: “Whattya got? Show me your Basquiat/He didn’t keep it all to himself/Even with Keith, out on the street he died/Fighting so you can do it as well.”

Rarely have stars as big as Madonna made themselves so accessible to both the media and public, and she’s often spoken of the challenges of sussing out the starfuckers from those worthy of her company. But she’s never addressed the subject as frankly as she does in “HeartBreakCity,” a piano ballad that builds to a inconsolable frenzy of chanted background vocals, martial drums, and, perhaps not coincidentally, a sample of “They Don’t Care About Us” by Michael Jackson, an icon who, unlike Madonna, succumbed to the traps of fame. Her survival is, no doubt, partly credited to the hardened exterior she’s erected over the years, transforming from the soft, vulnerable vixen of Bedtime Stories into the pop-music equivalent of Joan Crawford. Finally, “Inside Out,” which juxtaposes her sensual invitations and supple vocals with an industrial soundscape of ominous, sinuous bass and crackling hip-hop loops, gives us a glimpse of the unabashed romantic hidden beneath the maschinenmensch. She might as well be serenading herself when she begs, “Cynical smile, time to take off your mask.”

It’s these moments that render the album’s fumbles all the more frustrating. Like its predecessor, 2012’s MDNA, Rebel Heart is all over the map, not just musically, but lyrically and vocally. Madonna has always been a versatile artist, but also a surprisingly coherent one, adept at threading seemingly disparate styles together using lyrical themes or sonic continuity, and thus setting an incredibly high standard for both herself and pop music as a whole. She was wise to largely abandon Avicii’s chintzy (yet admittedly infectious) synth hooks in favor of more forward-minded production from the likes of DJ Dahi and Blood Diamonds, but the album would have benefited from more of those up-and-comers and less of established names like the overrated Diplo.

With so many producers with disparate modes at the helm, Rebel Heart feels overworked, the duality of its title muddied by the inclusion of garish party jams like the infuriatingly catchy but lyrically cringe-inducing “Bitch I’m Madonna” and sex songs like “Holy Water,” ostensibly lumped under the “rebel” banner using only the broadest of interpretations. The latter track is a welcome bit of percolating electronica, and she deserves props for effortlessly deploying the word “genuflect” in a pop song, but Madonna’s Catholic baiting feels like a reflex at this point. Despite her well-documented reputation, you could count her sexually provocative songs on one hand up to this point, so the fact that she nearly doubles that number here in one fell swoop suggests she’s either consciously taking the piss out of her Dita Parlo persona or making some kind of comment about women of a certain age unapologetically flexing their libidos. Which would be all well and good if the lyrics rose above Janet-grade (“Oh my God, you’re so hot, pull my hair, let me get on top,” she sings on the lazily titled romp “S.E.X.”).

The sheer number of songs on the album (19, not counting six more on the “super-deluxe” edition) practically guarantees these missteps; an apparent lack of internal editing would suggest a lack of vision. From “Hold Tight” to “Borrowed Time,” however, there’s a timely recurring theme of love triumphing even during the end times. A decade of disco-Madonna makes it easy to forget that she’s a skilled balladeer, and the post-apocalyptic “Ghosttown,” about the last two lovers on Earth, takes a generic, contemporary-pop template (think “Halo”) and stamps it with her singular style a la 1994’s Babyface-penned “Take a Bow.” Rebel Heart is too long, too unnecessarily fussed over, to join the ranks of Like a Prayer, Erotica, and Ray of Light, but tucked inside this lumbering mass of songs are 10 to 12 tracks that would, under any other circumstances, make for Madonna’s best album in at least a decade.