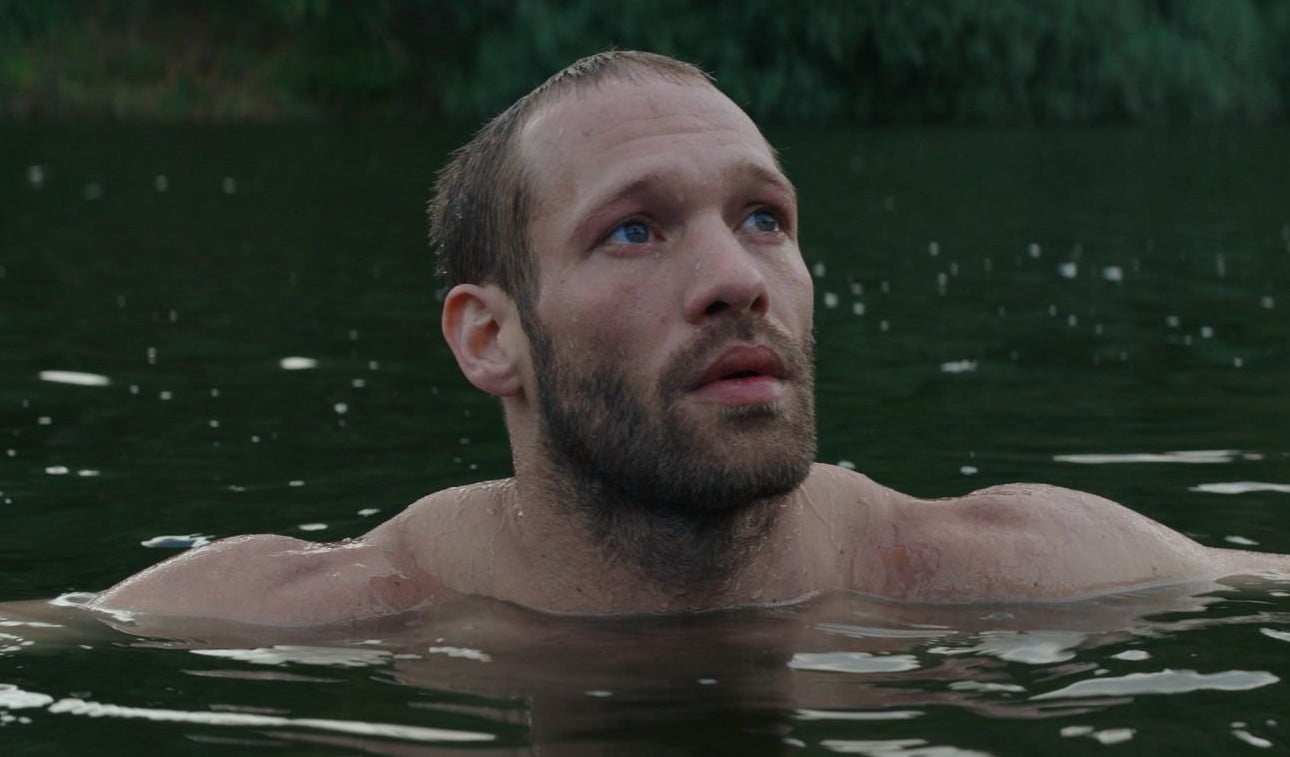 Portuguese filmmaker João Pedro Rodrigues’s The Ornithologist revels in a hushed and lucid expressionist naturalism that’s reminiscent of Andrei Tarkovsky’s Stalker. As Fernando (Paul Hamy) swims in a river, for instance, the camera tracks across the water by his side, the man’s strides informing the images with through lines so clean and striking that they could’ve been drawn by a ruler. These sorts of carefully lit and arranged compositions infuse this natural setting with a heightened subjectivity that doesn’t distance the audience from the land’s essential visceral wildness.

Rodrigues’s formalism accommodates and complements the habitat without eclipsing it, and so the film has an unusually vivid sense of place that feels discovered yet controlled. This dichotomy between discovery and control cuts to the heart of The Ornithologist’s ideological drive. The northern Portuguese wilderness here is a place of hard, glistening rocks and tranquilly sensual water, of fallen religious sanctuaries and birds, particularly owls, that serve as a kind of Greek chorus, though a golden eagle sends its own message, roosting on a cliff in slow motion that emphasizes its primordial majesty.

The Ornithologist is consistently unsettling, but it also simultaneously allows us to enter a meditative zone, savoring the stately grandeur of the images as well as the startling competency of Fernando, a fetishized stud from the Jason Statham and David Beckham Institute of Abs and Buttocks who weathers danger with comic unflappability—most notably when casually escaping captors, looking among their things for his stolen goods with a deliberateness that’s both amusing and maddeningly suspenseful.

Rodrigues is a rapt and daring formalist, who stages suspense-film set pieces as if they’re moments from an observational documentary, grounding heightened tropes in a convincing faux-reality. He also has a perversely unruly streak that gradually comes to The Ornithologist’s fore. The first hour suggests the film that might have resulted if Tarkovsky had directed a 1970s Australian thriller, but Rodrigues is ultimately after different aesthetic game.

The first hint arrives before the opening credits, with a quote from St. Anthony of Lisbon, “Whoever approaches the Spirit will feel his warmth, hence his heart will be lifted up to new heights.” Innocent viewers will assume this quotation to be figurative, complementing the admirable simpatico that Fernando has with his setting, and the calming watchfulness that he inspires in the viewer. These impressions are proven to be true, to an extent, but Rodrigues also stages an allegory of St. Anthony, the patron saint of lost things, that’s simultaneously oblique and crushingly literal.

Another hint asserts itself retrospectively after all has been revealed to us, when Fernando encounters a pair of women, Fei (Han Wen) and Ling (Chan Suan), Chinese Christians who’ve gotten lost on their pilgrimage to Santiago de Compostela. Fei and Ling chastise Fernando for his atheism, claiming, with unseemly egotism and contemptuousness, that he will discover faith one day. The irony of this scene resides in the fact that Fernando appears to be more connected to Earth than these women, who’re callous, married to their smartphones, and far more dangerous than they let on.

Fei and Ling belong to a long tradition of Christian interlopers who presume to tell natives how to regard their own land, and Fei and Ling’s superficiality deliberately shatters the transcendental spell that Rodrigues has woven up until this point and will gradually re-instill, until the more decisive shattering of the film’s conclusion. That these Christians are Asian women, rather than the European men who’re predominantly associated with the religion’s atrocities, speaks further of Rodrigues’s cheekiness.

After interludes of increasingly allegorical surreality—most notably with an uncivilized shepherd, tellingly named Jesus (Xelo Cagiao), who suffers a stigmatic wound—Fernando transforms into Anthony, played by Rodrigues himself. Fernando’s conversations with the fish and doves earlier in the film suddenly attain a more intellectually dogmatic association, as does his dust-up with Fei and Ling, who’re facetiously proven to be correct in their criticism of Fernando. His journey was, indeed, an adventure in glib discovery.

Rodrigues flushes his film down the toilet—purposefully and ironically—for the sake of a joke that recalls the ending of Simon of the Desert, in which the transporting reverie of Luis Buñuel’s formalism was disrupted so as to put religion in its debauchedly fashionable place. Here, a man similarly gains religion at the expense of communion with Earth, reentering vulgarly fabricated civilization as a saint; correspondingly, Rodrigues hocks a loogie in Catholicism’s face at the expense of the spellbinding, existentially freighted arbitrariness that he sustained up until this conclusion. Impudently declaring himself a saint, Rodrigues steals his own film out from under his protagonist as a meddlesome assertion of dominion that’s both resonant and obnoxious.