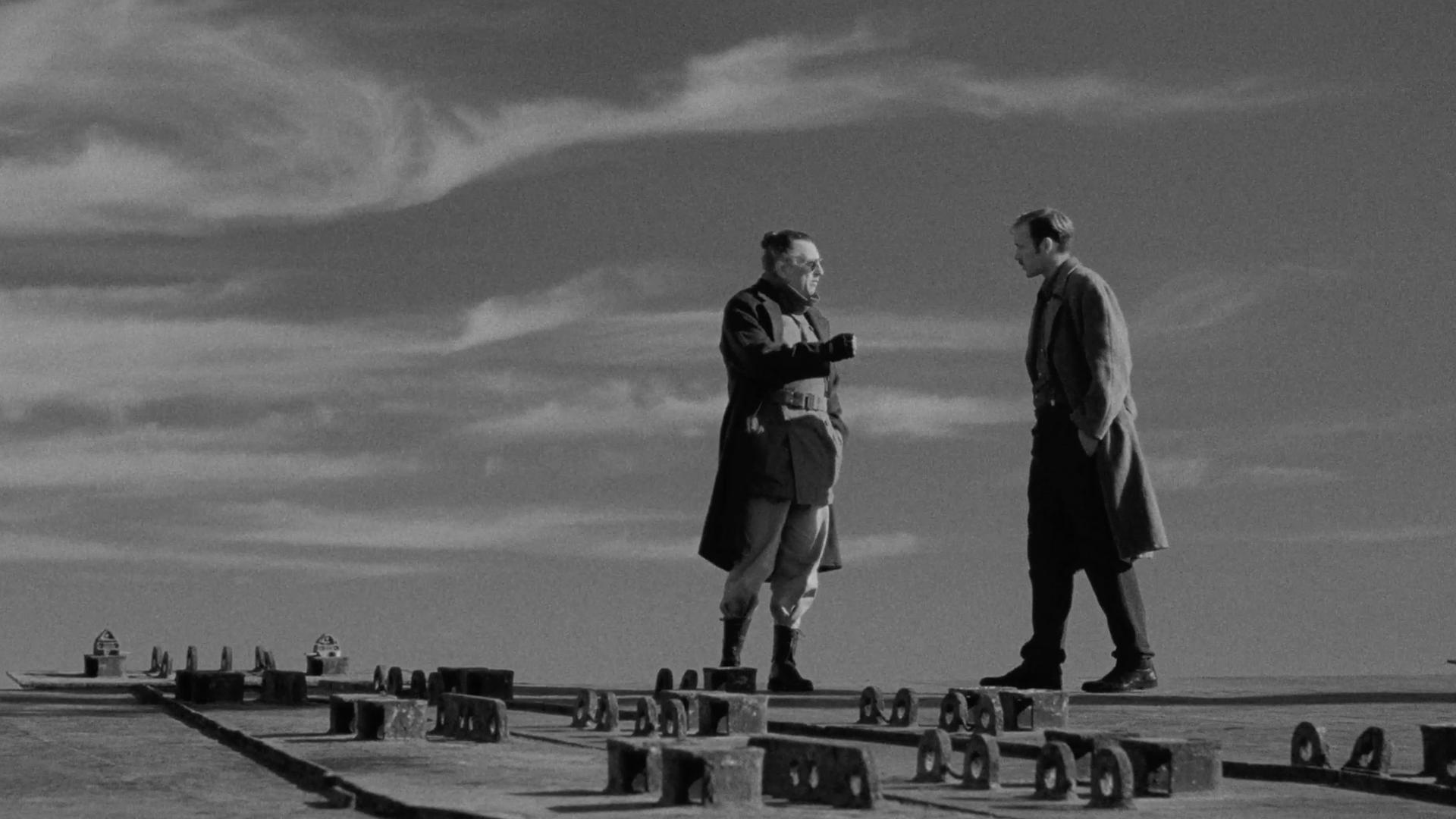 “Stop being so enigmatic,” one character chides another near the end of writer-director F.J. Ossang’s 9 Fingers. As a viewer, it’s hard not to sympathize with the sentiment. Ossang’s film is a ravishingly inscrutable mélange of styles and influences in which nothing is ever certain. Even the film’s genre is difficult to pin down, as 9 Fingers opens as kind of existentialist film noir before blooming into an espionage drama redolent of early Lang and finally ending up as a Maddin-esque riff on a maritime adventure. Some stretches of the film are nearly wordless, simmering with the quiet intensity of a German Expressionist silent production, while other sections are exhaustingly talky, full of doomy soothsaying and bombastic philosophical rants.

9 Fingers opens with a man, Magloire (Paul Hamy), who, while waiting for a train, bolts when he sees some officials checking people’s IDs. No sooner has Magloire made his escape than he stumbles on a dying man on a beach who hands him a wad of cash. But the gift only serves to bring Magloire to the attention of a group of criminals who embroil him in their schemes. After one of their heists goes bad, the gang takes refuge on a ship which is transporting polonium, though its cargo containers are later revealed to be empty.

It can be difficult to figure out what the machinery of this plot means or where it’s all heading, but this perverse aimlessness is at the very heart of 9 Fingers. It’s a film about a ship carrying nothing, which is going nowhere—or possibly to Nowhereland, a floating archipelago made of trash—and contains people who talk a lot but communicate little. There are no grand revelations or startling confrontations here, and after a while, Ossang’s stubborn unwillingness to adhere to even the most basic conventions of storytelling becomes a bit wearying, even if there’s nevertheless something liberating about the filmmaker’s punkish refusal to be pigeonholed.

Despite all its confoundments, 9 Fingers works as a unified whole thanks to Ossang’s playful sense of humor, which recalls the deadpan ironic romanticism of Aki Kaurismäki, and the utter gorgeousness of the film’s images. Shot on 35mm, and in crisp, shadowy black and white, the film positively oozes style, with passages that evoke everything from the future-noir stylings of Jean-Luc Godard’s Alphaville to the gloomy gothic horror of Val Lewton to the high-art sensationalism of Fritz Lang’s Mabuse trilogy. Even the film’s gripping opening sequence—a seductively tenebrous foot chase—demonstrates a spontaneous visual imagination worthy of Orson Welles.

9 Fingers’s turn toward portentous soliloquizing in its final act is less gripping, overwhelming us with streams of pseudo-nihilistic verbiage, but even here Ossang knows how to whip up a feeling of tension with claustrophobic interiors and stark single point lighting. As one seeming plot development after another is revealed to be a mirage, there remains something ineffably compelling about Ossang’s film. Perhaps it’s the dynamic visual style or the weirdly fascinating artificiality of its melodrama. Or perhaps it’s the film’s very inscrutability, its negation of fixed reality and stable meanings, which ultimately explains its peculiar allure. After all, as a character at one point explains to Magloire, “To understand nothing, that is the key.”

Interview: Joel Edgerton on the Making of Boy Erased