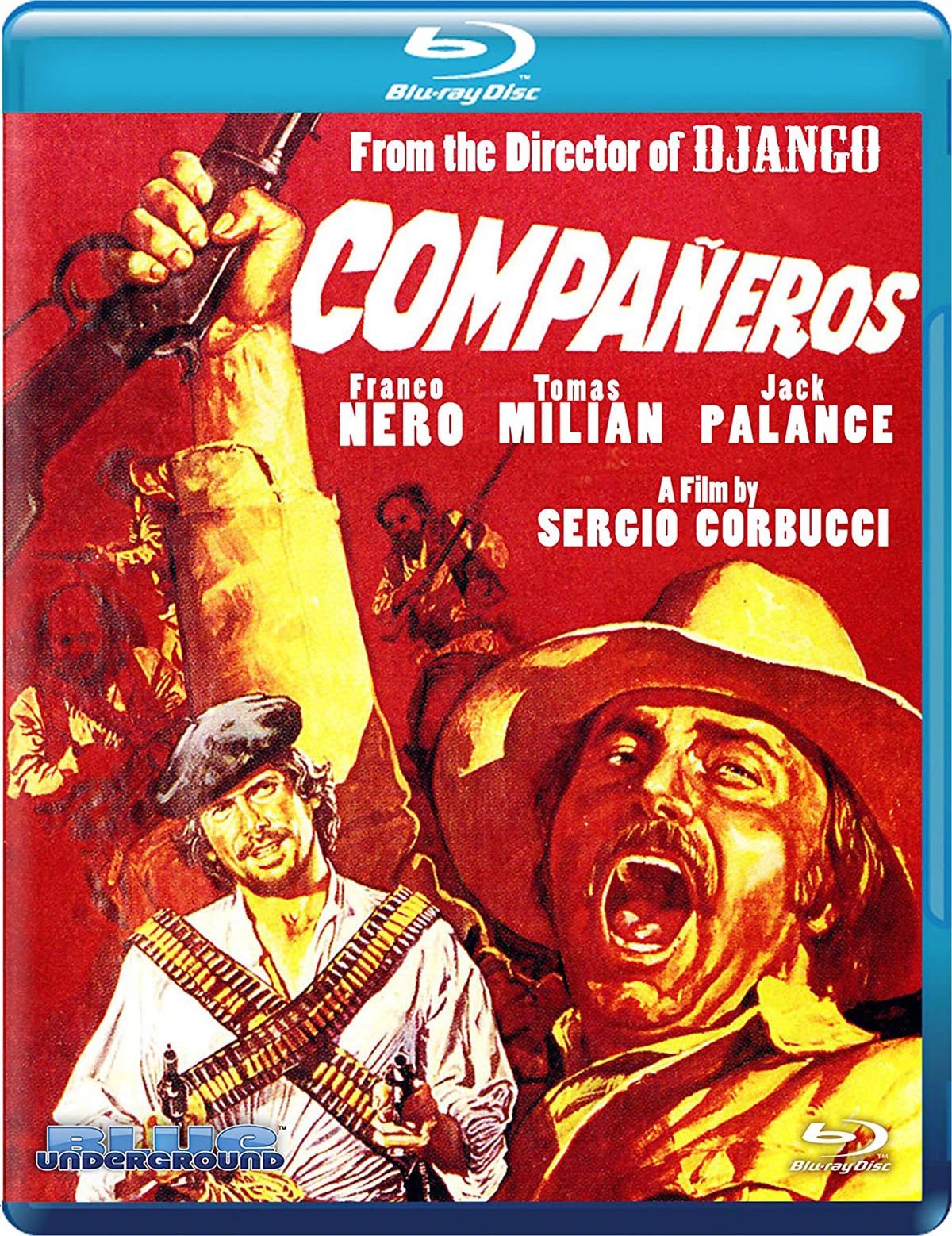 The radicalized wing of the spaghetti western is the so-called Zapata western. Films like Damiano Damiani’s A Bullet for the General shoved into the foreground (and thus right under viewers’ noses) the engaged political agendas and satirical social commentary that frequently haunted the margins of more mainstream Italian westerns. Invariably set against the backdrop of the Mexican revolution of the 1910s, the Zapata western thrusts a stereotypical odd couple, an itinerant foreign mercenary (usually American) and a politically naïve Mexican peon, into the fractious revolutionary fray. That these films evolved into a recognizable subgenre in the late 1960s, in the wake of American imperialism and the escalating war in Southeast Asia, can hardly be considered coincidental. Aside from its palpable merits as a brilliantly mounted genre offering, Compañeros is virtually unique among this otherwise heterogeneous wild bunch because it so explicitly takes as its subject matter the philosophical and ethical nature of revolution.

Compañeros is also unusual in that it opens with a high noon-style standoff between its resident Oscar and Felix, Swedish mercenary Yodlaf Peterson (Franco Nero) and a Mexican peasant known as El Vasco (Tomas Milian) because of the Basque-style beret he affects, then proceeds via flashback to delineate how they arrived at this impasse. Their initial meet-cute, involving invectives and mutual recriminations, takes place only after we’ve been properly introduced to the characters separately. Peterson arrives in town along with a train car full of explosives, and El Vasco dispatches an insulting army colonel (Eduardo Fajardo) with his own saber, gaining recruitment into the revolutionary ranks of Generalissimo Mongo (José Bódalo).

Also in town are a gaggle of student revolutionaries led by Lola (Iris Berben), who espouse the nonviolent principles of the film’s ostensible moral epicenter, Professor Xantos (Fernando Rey). In its first 15 minutes, Compañeros thus deftly sketches in its personages and rival factions and adumbrates their interrelations. What follows is a nearly Homeric odyssey of labyrinthine subplots and random moments of strangeness, whose chief embodiment is freelance mercenary John (Jack Palance), a reefer-toking, falcon-fawning weirdo with a wooden hand and an abiding hatred of the Swede. There’s no clear reason for the character’s inclusion, other than the simple fact that director Sergio Corbucci wanted to work with Palance again after The Mercenary. Indeed, Palance is completely free-range here, obviously improvising most of his lines and generating other odd bits of business, like the not-necessarily-ersatz spliff he puffs on, with which Compañeros is replete. Witness, for example, little touches like the outsized hearing aid one of John’s henchmen sports.

Along the way, there’s time enough for Corbucci to reprise (and just maybe spoof) a famous coffin-tugging moment from Django, stage a bravura jailbreak sequence involving a carriage full of prostitutes, and engineer a particularly nasty example of pre-waterboarding “enhanced interrogation techniques.” There’s a fine, rude humor on display through most of its running time, but, as the film enters its final act, the mood turns serious. The roles assigned to Peterson as exemplar of selfishly pursued profit motives, and El Vasco, eager to align with whatever side’s on top at the moment, are deepened and complicated by their exposure to Xantos’s selfless adherence to the cause of nonviolence.

There are real ideas, still painfully relevant ones, being worked out here about the uses and abuses of violent agitation in the face of oppression and exploitation. It’s easy, and more than a little glib, to gloss Peterson’s final rallying cry as an unambiguous call to arms, especially since his crisis of conscience comes only when he’s at last confronted with the prospect of almost certain death. In the end, Peterson’s image changes into a flat silhouette (icon or caricature?) as the screen turns totally red. We’re left to wonder whether this is meant to wave the red flag of revolution under the nose of an incensed populace, or simply stands in for the oceans of blood spilled by both sides in an endless internecine struggle for the supremacy of an idea. Compañeros sends up its hue and cry; how you respond is left up to you.

Sergio Corbucci and cinematographer Alejandro Ulloa draw from a multifarious visual grab bag throughout the film: Static camera setups segue seamlessly into sweeping tracking shots and jolting handheld camerawork, and the sheer number and variety of these setups is truly staggering. Eugenio Alabiso’s razor-stropped editing rivals his exemplary work for Sergio Leone in The Good, the Bad, and the Ugly. Blue Underground’s 1080p/AVC-encoded Blu-ray transfer significantly boosts color saturation and the clarity of fine details, a real improvement for a film filled with ancillary bits of business going on in the background and at the edges of the frame. The Master Audio mono is excellent, impressively delivering Ennio Morricone’s brilliant and protean score, with its fuzzed-out guitar stings, bluesy banjo and harmonica cues, and a rousing chorus centered on the revolutionary chant “Vamos a matar, compañeros” (which also serves as the film’s official on-screen title).

Blue Underground carries over the featurette and trailer from their earlier DVD, and adds a brand new commentary track for its Blu-ray debut. “In the Company of Compañeros” presents short and sweet interview segments with stars Tomas Milian and Franco Nero and composer Morricone. Nero discusses his history of collaboration with Corbucci and his occasionally tendentious working relationship with Milian. For his part, Milian admits to being famous in Italy for being difficult, demonstrates how to convey character through the proper placement of one’s headgear, and talks about improvisation on the set. Morricone sketches the unlikely basis of his score in Gregorian chant and reggae. The commentary track from journalists Joyner and Parke is an informative listen, conversational yet packed with intriguing information about the film’s production history, historical setting and authenticity, as well as the careers of cast and crew. Joyner and Parke also excel at drawing out points of comparison between Compañeros and other westerns, both domestic and international.

Get radicalized with Compañeros in a sterling new Blu-ray transfer from Blue Underground that’s bolstered by the inclusion of an engaging commentary track.