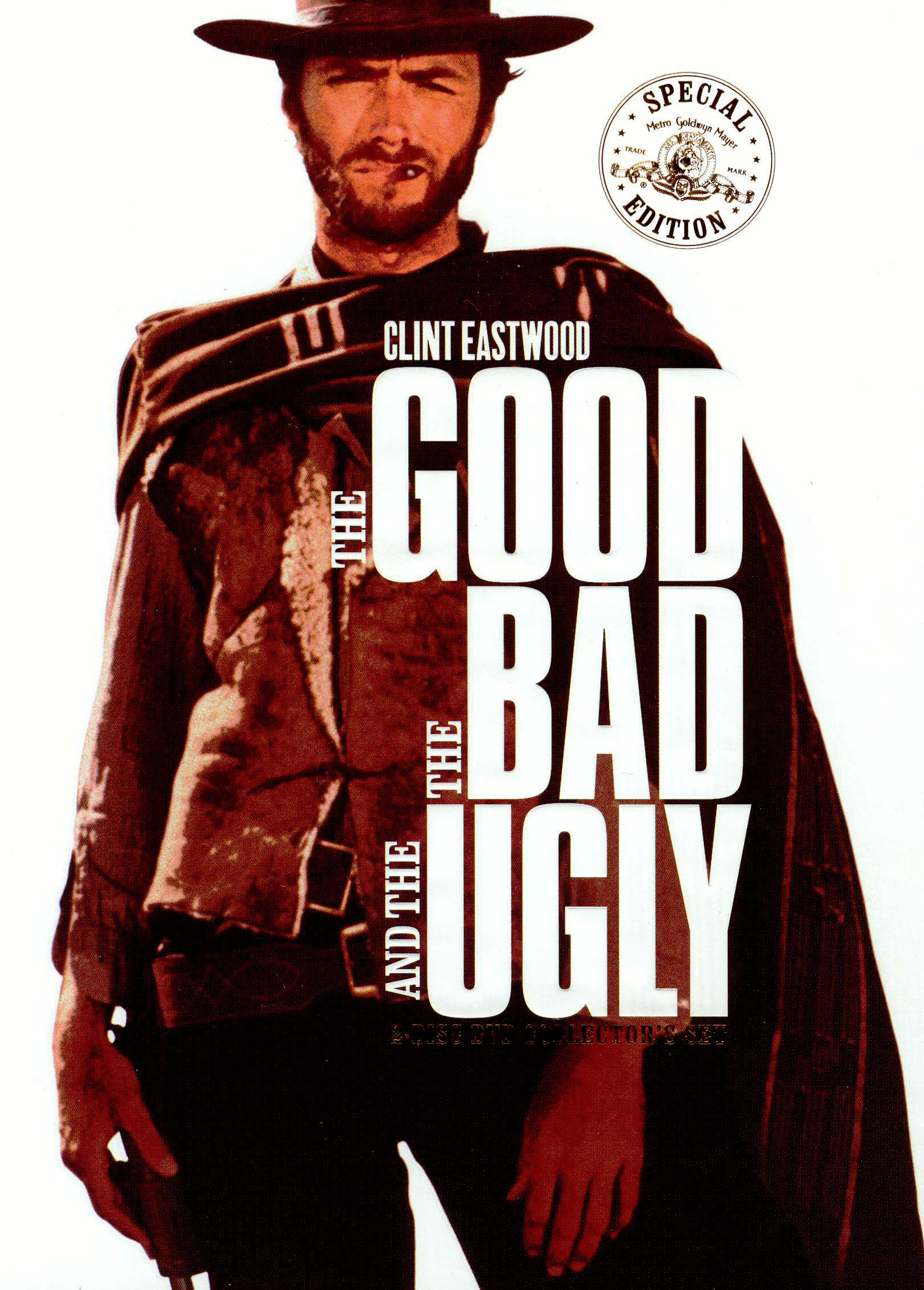 It seems inconceivable now that spaghetti westerns, specifically those served up by Sergio Leone, were once considered to be somehow less faithful to the western tradition than Hollywood’s crippled efforts of the same time period (look no further than Paint Your Wagon, the musical that Clint Eastwood made a few years down the road). The Good, the Bad and the Ugly, shorn of nearly 20 minutes for its original American release, is surely one of the most compelling validations of the western genre’s most elemental touchstones: the quiet stoicism of men who were islands unto themselves, the necessity of according respect to that unforgiving bitch that is the Land, and the malleable but unquestionably unbreakable divisions between good and evil.

The Man with No Name (Eastwood) might have a latently (postmodern) unscrupulous streak in his race against Lee Van Cleef’s “bad” Angel Eyes and Eli Wallach’s “ugly” Tuco to find $200,000 worth of buried gold, but the scene where Eastwood’s character covers a dying Civil War soldier with his trench coat confirms that there’s really nowhere near as much room for debating his moral alignment as there was even in the later work of John Ford. Perhaps audiences viewing the film during its original release were looking for that moral clarity that characterizes “respectable” westerns and were thrown off by Leone’s unbridled cinematic flamboyance. The director’s uniquely impassioned and architectural Italian sensibilities turned the American Southwest—or, rather, whatever portion of Spain his producers decided would suffice as a substitute for the real deal—into a dreamlike terrain of bombed-out ghost towns that still invariably host cathartic shoot-outs, amphitheater-shaped graveyards that seem nearly a mile in diameter, and wide vistas that alternate with extreme close-ups without nary a medium-shot-as-buffer in sight.

And, of course, those alternately lush or obtuse snatches of Ennio Morricone music that you’re never quite sure are merely musical accompaniment and not possibly emanating from the action on the screen—as when a Confederate P.O.W. band plays accompaniment to a prolonged beating or when desert birds seem to be whistling along to the signature fourth-inversion riff. He sometimes sacrifices lucidity for effect (as when Wallach’s motormouth inexplicably goes all tacitly Van Cleef for one compelling scene as he “shops” for a new gun), but Leone’s cinema, now fully embraced by cinephiles and fanboys alike, is practically a genre unto itself. The filmmaker’s synchronicity with Eastwood’s protagonist—and, thereby, the cowboy mythos in toto—as a rogue, conflicted iconoclast casts him in the same rarified echelon of directors who, like John Ford and John Huston, clearly attempted to live out their own legends.

Gorgeously grainy, this is the type of transfer that shows the film’s age to the degree that some might be distracted by. But I for one think it is spectacular to see video transfers like this one that do nothing to hide their source material’s blemishes. (There’s one scene roughly halfway through the film where Eastwood and Wallach are sitting side-by-side in a carriage-right before they meet the Union army-that has a full second of yellow graffiti littered all over the place that will drive many anal DVD perfectionists up the wall, but I find it somewhat refreshing.) At any rate, colors are as vivid as can be expected from Leone’s oftentimes monochromatic scheme. The refurbished 5.1 English sound mix is undoubtedly going to be even more contentious, as it tends to isolate and accentuate the newly-recorded ADR work and foley effects (not unlike what happened with the restored Vertigo and, to a lesser extent, Rear Window). But Ennio Morricone’s score is breathtaking, and purists can always switch over to the original Italian mono if they’re so inclined. (Of course, come to think of it, what are purists doing watching this quintessentially big-screen epic on TV in the first place?)

For starters, disc one contains a hot-cold Richard Schickel commentary track. It’s telling that he’s referenced on the box as a “film historian” instead of the more reasonable “film critic” label, because Schickel obviously wants the bulk of his observations to be considered biographical and historical. Unfortunately, his facts are occasionally off (as when he mixes up who’s “bad” and who’s “ugly”), even as some of his critical evaluations are much more interesting and sensible. But three hours is a bitch of a duration to cover, and Schickel is noticeably winded by the time the film reaches the digressive bridge sequence, his mind seeming to wander as he holds out syllables for seconds at a time. He also appears in the second disc’s set of featurettes (which were obviously produced as a single work and then pared down to bite-sized chunks to keep production costs down-I’ve never bothered to figure out how that works) alongside Eastwood, Wallach, and producer Alberto Grimaldi, among others. They’re divided into five subjects: Leone’s style, the production of this particular film, the true story behind the Civil War backdrop, the restoration of the film, and Ennio Morricone’s contribution to Leone’s films. Of course, there’s plenty of cross-pollination, and the section on Leone’s style is as much about the production of The Good, the Bad and the Ugly as the official “behind the scenes” featurette. Finally, there are a few deleted scenes (one of which is merely a reconstructed set of titles and stills), a poster gallery, theatrical trailers, and a few humorous hidden interview bits with Eli Wallach.

Operatic is scarcely the word for Sergio Leone’s impassioned riffs on the western tradition. Never had an audience that required so little in the way of cinematic panache been fed so much.

Review: The Lord of the Rings: The Return of the King on New Line DVD