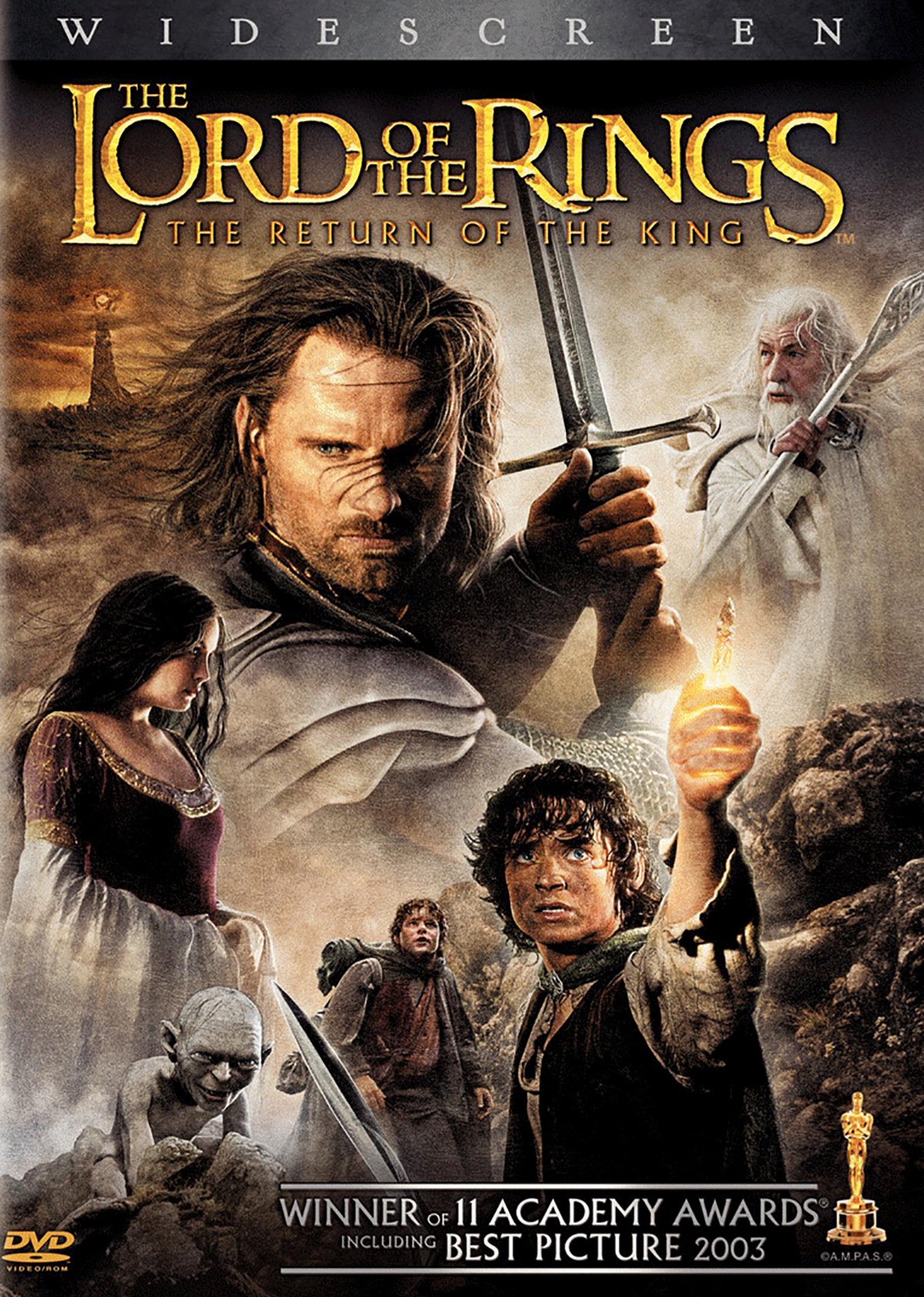 It is with great sadness that Peter Jackson’s mega-production of J.R.R. Tolkien’s The Lord of the Rings trilogy comes to an end. Tolkien’s weakest text isn’t exactly Jackson’s strongest, but despite its little imperfections, The Return of the King brings together some of the best parts of The Fellowship of the Ring and The Two Towers. Because the film is so loyal to Tolkien’s original text, I can’t imagine purists really complaining. More goose-pimply epic swirl and top-notch Uruk-hai smackdowns, but there’s also more of the dreamy Christian allegory that highlighted the first film. Just as Fellowship of the Ring envisioned a mythic fairyland at peace, the grease-and-elbow of Two Towers put us knee-deep in its imminent destruction. Not surprisingly, Return of the King is a ravishing work of mythic restoration.

Frodo (Elijah Wood) is a complete and utter mess, making his way slowly to Mount Doom with Hobbit best-pal Sam (Sean Astin) and bi-polar freakazoid Gollum (Andy Serkis) in tow. The film begins with a sinister backstory that sets up the allure of the forbidden fruit that now hangs from Frodo’s neck: Serkis, as Smeagol, kills for his “precious” and slowly wigs out over time. Many years later, he’s every bit as calculating, cooking up a deadly encounter with you-know-“her” but not before plotting an elaborate mix-up between Frodo and Sam using breadcrumbs (“Give us this daily bread,” so to speak). Gollum’s last-ditch attempt to reclaim his old drug is the Christ-like Frodo’s only chance to destroy his oft-mentioned “burden.” But this is just one of many jittery interplays in the film.

While Aragorn (Viggo Mortensen), Legolas (Orlando Bloom), and Gimli (John Rhys-Davies) wake the dead, Gandalf (Ian McKellen) prepares to fight the Witch King over at jaw-dropping Minis Tirith, where the white wizard must navigate Denethor and Faramir’s fiery father-son disconnect. Behold the lighting of pyres on mountainsides, an awe-inspiring evocation of primal communication. This is how tightly the inhabitants of Middle-earth are connected. In Return of the King, the magic is in the details, and Jackson works overtime to get everyone in on the action: Pippin sings a song (ostensibly for Denethor’s pleasure, it’s also a dreamy musical backdrop for one of many battles in the film), and it’s a nosy Pippin’s vision of a lonely tree in a garden that brings the fellowship to Minis Tirith.

Much of the film’s problems are, of course, relative (Uruk-hai leaders shouldn’t be allowed to talk!). Fans of Christopher Lee’s hot air will probably miss Saruman the most. (Jackson wisely understood the character’s potential to distract, so it’s assumed that the dark wizard fell along with his kingdom at the end of Two Towers.) Jackson puts the cock-tease into the film’s sweltering, geometric cross-cutting, but the film’s 200 minutes still feel overstuffed. The dead army doesn’t bring the film to a screeching halt in the same way Treebeard did Two Towers, but there’s now a hurried, going-through-the-motions quality to these and many other scenes. Treebeard and Galadriel’s cameos are small, but the characters could have been easily excised without being missed. (Cate Blanchett’s catwalk strut from the first film was endearing, but her breathy delivery is cloying when her dress isn’t flowing sensually behind her.)

Because Jackson spends considerable time fulfilling quotas, crucial melodramas are undervalued. Jackson is ill-prepared to handle the Aragorn-Arwen-Eowyn love triangle. Jackson knows this, which might explain why he avoids the shot of Eowyn’s face when Aragorn returns and snags the eternally lovelorn Arwen (Liv Tyler, more asthmatic than Blanchett). The nondescript Eowyn’s curious empowerment ritual is seemingly informed by a broken heart first, political-correctness second. Jackson does a poor job evoking the woman’s genuinely breathtaking success in battle as a personal mission. Womanhood seems almost beside the point, when it really should be the true impetus. The Eowyn-Merry tagteam outside Minis Tirith is essentially Jackson’s promise to Tolkein’s female and outré fans. Of course, it all successfully points to the inclusiveness of the author’s world. The Lord of the Rings trilogy has appealed to girls, boys, straights, and queers alike, and there’s plenty of worship in Jackson’s film for everyone who’s good—regardless of sex, size or how long Sam stares into Frodo’s eyes.

Jackson’s majestic longshots and extreme close-ups will make you swoon. Wind and fire are their own characters, and there’s a primordial wistfulness to many of the film’s power shots (namely the sight of a defeated Frodo and Sam at Mount Doom while fireballs whisk by their heads). Because of their elegiac stillness, it’s as if we’re watching daguerreotypes from an audacious, ridiculously dramatic neverland. The film’s best (often simplest) fantastical flights of fancy (an impromptu beam of light from Gandalf’s staff, the flight of savior eagles) are those that smooth out the roughest battle scars and evoke losses being rewarded from cosmic beyonds. We permit the CGI madness because there’s an unmistakable transcendental quality to the film’s images, and Jackson respects and authenticates Tolkein’s core principles of sacrifice and spiritual ascendance.

What I said about the preliminary two-disc edition of The Lord of the Rings: The Two Towers also applies here: “Because all the supplemental materials are available on the second disc (and because there’s no commentary track available), you won’t find a compression artifact anywhere. Edge halos are nil, blacks are rock solid and every skin tone (whether it’s the sweaty faces of the film’s hobbits and humans or the angry, ravaged mugs of the film’s deadlier creatures) is evoked with stunning detail. Predictably, this is a reference quality transfer. (Some of the film’s miniatures are easier to spot on the small screen, but that’s no fault of the transfer really.) As for the Dolby Digital 5.1 EX surround sound, I don’t think any existing audio on any available DVD player can do justice to this film’s loud and elaborate sound design. Surrounds are impeccable, dialogue is crystal clear and every Gollum hiss has an extra-chilling ring to it, but because there’s so much going on here, don’t be surprised if your sound system blows out.”

The second disc begins with two in-depth documentaries, the 23-minute “Quest Fulfilled: A Director’s Vision” and the 28-minute “Filmmaker’s Journey: Making The Return of the King.” Considering how all three films were shot at the same time, it’s a testament to how good these featurettes are that they don’t feel redundant. If memory serves, it appears that no footage-at least very little-has been recycled from previous featurettes. Next is the 45-minute National Geographic “Beyond the Movie” featurette, which delves into the question of leadership that looms over the film and other battles throughout history. It’s a little on the dry side, as are the six lordoftherings.net featurettes-some are poor in quality and all feel more or less spurious. Rounding out the disc are two theatrical trailers, fourteen TV spots, a trilogy supertrailer, and a plug for Lord of the Rings video games by EA.

Once again: You know that the definitive, extended DVD edition of the film is a few months away, so you’re probably buying this edition to whet your whistle until then.

DVD Review: The Good, the Bad and the Ugly on MGM Home Entertainment