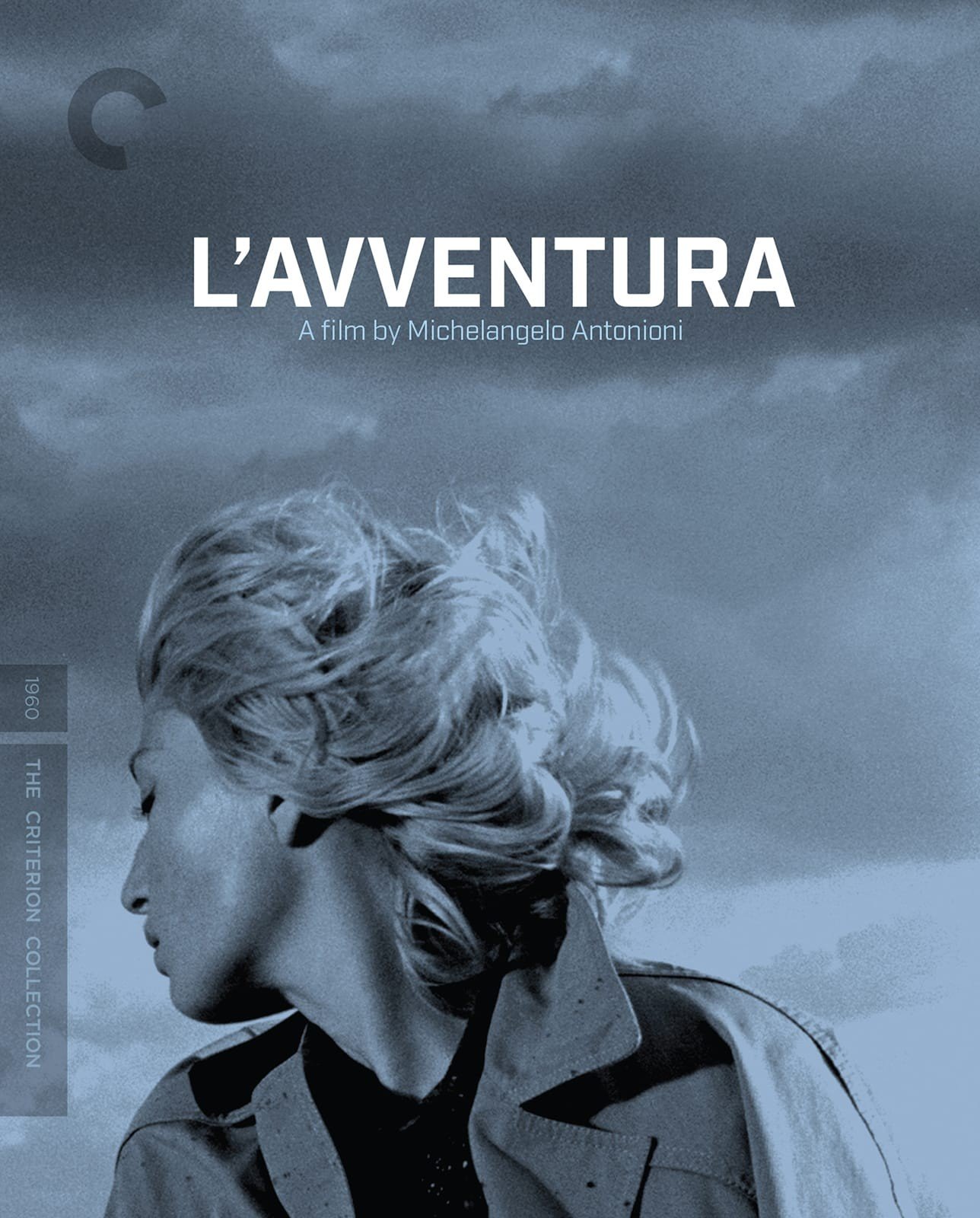 As Fredric Jameson explains in Postmodernism: Or, The Cultural Logic of Late Capitalism, blood, torture, death, and terror are the inevitable underside of culture and class history. Although there’s no actual bloodshed in Michelangelo Antonioni’s L’Avventura, Jameson’s words carry an ex-post-facto resonance that seems almost explicitly directed at Antonioni’s epochal masterpiece of fragmented architecture and wealthy ennui. That’s particularly the case if one understands the film as keeping state-mandated violence intimated, just outside the frame or in its periphery, while the pangs of thunderous waves, passions, and stilted affects stand in for those crumpled structures looming around Antonioni’s clueless lot of privileged pricks.

Anna (Lea Massari) is gone, vanished from a picturesque Mediterranean island while her boyfriend, Sandro (Gabriele Ferzetti), best friend, Claudia (Monica Vitti), and a handful of other vacation-destination blowhards witlessly scour every jagged shard of sun-baked rock looking for a body that will not appear. Antonioni’s camera, however, is less interested in finding Anna and more preoccupied with spatial imagination as it pertains to cinematic grammar, such that it often loses characters entirely, instead homing in on blankly enunciated geographic metaphors, like a blowhole that divides Sandro and Claudia as they look for Anna to no avail. The forms and shapes of the rocks are given as sensuous a lensing as both Massari and Vitti, the structures and the women each capable of various levels of interfacing. For the actresses, this is no better articulated than in an infamous shot with their bare backs to the camera, side by side, as the ultimate sexist question of “blonde or brunette?” takes much larger, undergirding dimensions in Antonioni’s cinematic realm, where everything, whether humans or apartment complexes, is stripped of its specificity.

Antonioni isn’t, however, merely engaging a tête-à-tête between old and new world or other emergent binaries throughout the film, but offering a rigidly composed mise-en-scène meant for a viewer’s utmost scrutiny. As such, the film’s titular “adventure” must be dually understood in aesthetic and metacinematic terms, where the representation of economic transition is paralleled with Antonioni’s navel-gazing at his own artistic development within a modernist mode. Nevertheless, L’Avventura isn’t simply an extended video essay on architecture and Antonioni’s shifting identity as a filmmaker, since he roundly defers these interests into the social concerns of women.

These convergences are marvelously epitomized in Anna’s early speech regarding a literal distance between herself and Sandro, which affords her a convenience that allows her to imagine whatever she likes. Anna is foregrounded in the frame, while a man holding a cane stands at a distance behind her, musing at architectural grandiosity, with an enormous, opened gate just behind him. Here is Antonioni’s brilliant wager, encapsulated as just one instance, but exemplary to the extent that what lies behind the open gate (and off screen) is a cultural institution implicitly equated with the cinematic medium, which necessarily exploits youth and splendor for capital gains.

The structures remain necessarily hidden as a background to the human subject, but Antonioni’s interests have been deliberately turned inside-out, where the feminine dime of Anna’s vulnerability and Massari’s visage are themselves interchangeable. L’Avventura is a disappearing act, but what vanishes isn’t only a woman, but all of the cultural baggage entailed, with the filmmaker providing a proto-feminist, male-helmed screed of self-indictment, soon to be taken up in spirit by Ingmar Bergman with Persona, and perfected decades later by David Lynch in Mulholland Drive. Antonioni seeks to implode any clear dividing line between social place and the subjects addressed by them. His subjects are largely oblivious to the implications of these spaces or places, but that’s entirely the point: They’re daft, but only by the grace of Antonioni’s punk inversions.

Moreover, Antonioni’s high-modernist aims endure for reasons beyond their devotion to reforming cinematic visual language—namely, as impetus for feminist commentary. Monica Bonvicini’s 1998 art installation Destroy She Said features dozens of film frames of women from ‘60s and ‘70s European cinema, including a still of Claudia waiting around the small Sicilian town while numerous men leer in her direction. Domietta Torlasco has explained Bonvicini’s piece as “disarticulate[ing] the dyad of male look and female image,” but L’Avventura largely does that already with images part political, part heavily ordered gag. At the film’s end, Sandro weeps pathetically, Claudia strokes his hair, and in the next shot, both characters receive a geographic corollary, she a mountain, he a wall. But just as Claudia symbolizes sexual awakening, she also embodies sexual somnambulism, since she has yet to actualize any of her realized desires. The caring gesture to Sandro’s despicable patriarch simultaneously confirms her wordless triumph and submission. And that’s the Antonioni paradox, in a nutshell: Sometimes a mountain is just a mountain, but it’s always so much more.

If any film in the history of European art cinema deserves a 4K transfer, it’s L’Avventura, and the Criterion Collection hasn’t dropped the rock. Every inch of these frames have been scrubbed of debris and artifacts, with white and black levels stunningly balanced and enriched throughout, according to the grain and colors of an original 35mm negative. As such, the film is now more of a marvel to behold on home video than every before, with the extended sequence on the island and subsequent search for Anna absolutely clean and clear for frame-by-frame visual inspection. Criterion’s 2001 DVD was just fine, but the encoding on this new Blu-ray is next-level work. As transfers go, this is as refined as they come. The sound, too, has been given careful attention as to eliminate all unintended artifacts and resounds quite impressively given the film’s generally subdued sonic tones and original monaural mix.

Criterion has added a single new supplement to the carried-over assortment of extras from the 2001 DVD and that’s Oliver Assayas’s nearly half-hour dissection of the film, with him calling the entire film “an aesthetic act.” Assayas examines several canonical points of interest, like the slow tracking shot of Sandro and Claudia driving away from the camera that, according to Assayas, suggests that “at the heart of nothingness, something watches them.” Otherwise, Gene Youngblood’s feature-length commentary remains one of the collection’s strongest, particularly because Youngblood embodies the best of both cinephilic and scholarly tendencies. He provides a close-reading backed by historical fact, only tripping up when he curiously announces that some of the shots reveal Antonioni’s potential to slip into self-parody, which is an odd, mostly hollow (and criterion-less) assertion given Youngblood’s generally sound and rational line of argumentation. Otherwise, there’s a nearly one-hour documentary examining Antonioni’s filmmaking before L’Avventura, which also features footage with cast and crew at the 1960 Cannes Film Festival for the film’s opening/reception. There’s also a little over 20 minutes of Jack Nicholson reading essays written by Antonioni that reflect on the director’s reluctance to do interviews and his complex thoughts on actor/director relationships. Finally, there’s the film’s original American trailer, as well as an essay by Geoffrey Nowell-Smith, Antonioni’s statements about the film after its Cannes premiere, and an open letter distributed at the festival.

L’Avventura arrives on Blu-ray with a spectacular 4K transfer from the Criterion Collection, meaning cinephiles can finally quench their thirst for metonymic mastery by viewing the entirety of Michelangelo Antonioni’s modernist trilogy in stunning 1080p high-definition.