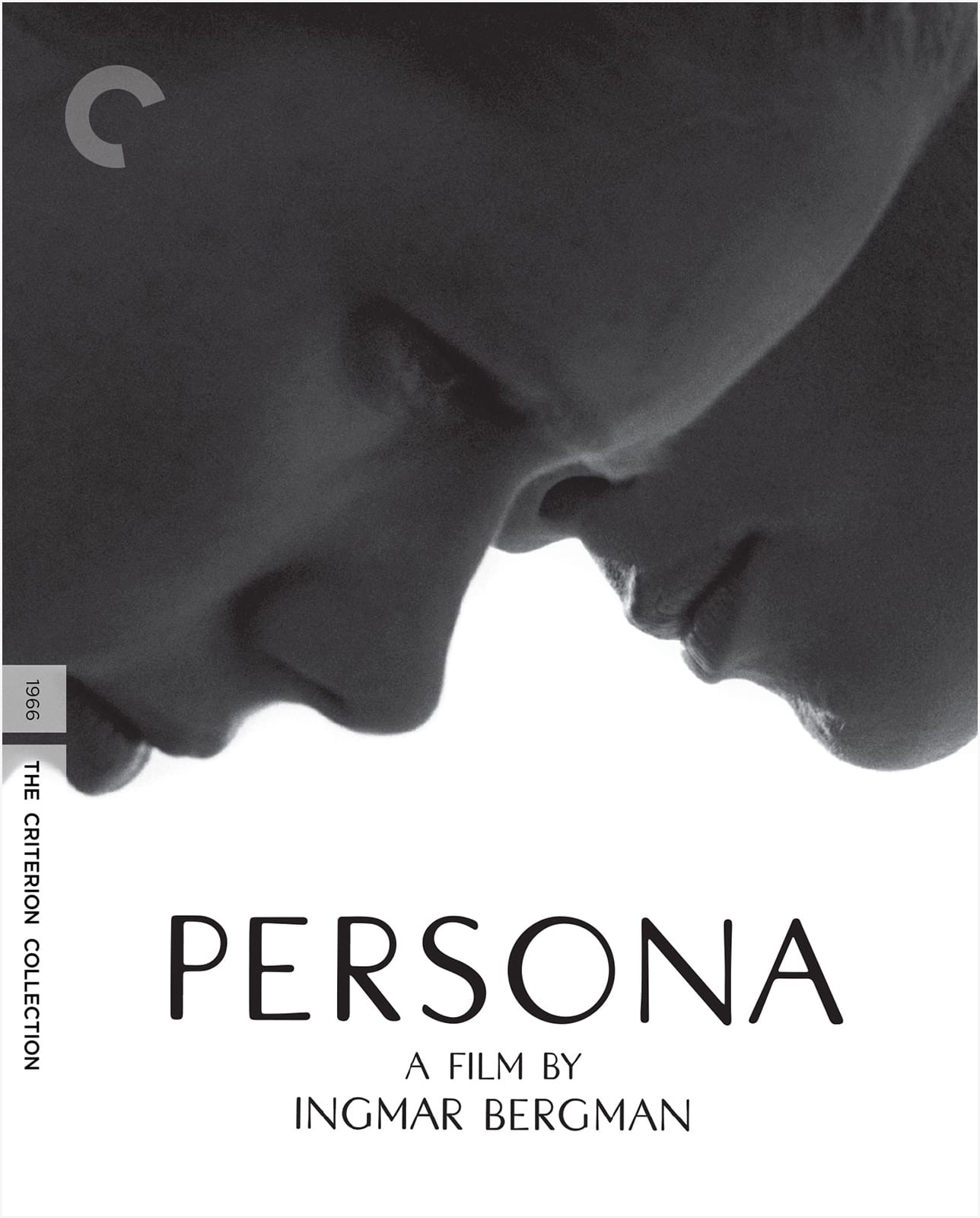 The gulf between art’s intent and the meaning audiences actively glean from it is an operatic manifestation of a basic human concern of communication. The great comedy of our species, which is emphasized in sex, is that every human perceives every source of stimulation slightly differently, and so we’re never entirely on the same page with one another. This wall of even subtle misunderstanding was of paramount concern to Ingmar Bergman, and that obsession was magnified by the director’s stated perception that his films, deconstructions of misunderstanding, were, themselves, ironically being misread as obtuse, overly intellectualized homework assignments. And it’s that despair, both as an artist and as a human being writ large, that drives Persona.

The 1966 film suggests an artist slashing away at a canvas so as to purge their technique of artifice. The story is a classic Bergman tale of women stewing in their own metaphorical juices, but there are subtle and not-so-subtle dissonances. Elisabet (Liv Ullman) is a celebrated film and theater actress who suddenly goes mute. A doctor doesn’t find anything “physically” wrong with her, but inexplicably suggests that Elisabet crash her personal beach house with a young nurse, Alma (Bibi Andersson), who immediately feels an intense connection with the actress. Elisabet agrees, and what follows is a prolonged duet of guilt and yearning. Elisabet and Alma are revealed to have a number of similar skeletons in their closet—to the point that they, and you, as a viewer, begin to wonder if what’s transpiring is really a monologue disguised as a dialogue. Are Elisabet and Alma the same person? Is Alma just a projection of Elisabet’s insanity, or vice versa?

Complicating manners further is the film’s grammar, which is intentionally meant to jar viewers accustomed to Bergman’s prior work. A celebrated prologue initially primes us for a film by Luis Buñuel, or by Kenneth Anger, or maybe even by a member of the French New Wave who might be dabbling in the horror genre. This opening offers us symbols with a capital S. The carbons of a film projector gradually alight in close-up, in an explicit double entendre, and eventually empower the projector to begin playing. A boy awakens in what appears to be a morgue next to a dead woman, whose eyes open in an echo of a famed image from Bergman’s Wild Strawberries. The boy approaches a window that’s clearly the reverse side of a film screen, which is projecting alternating images of the faces of two women, who will soon be revealed to be Elisabet and Alma. There’s a frightening shot of a spider against an all-white screen, which is said to be a classic image of manipulation and, lest we miss all the pregnant suggestions of stifled, frustrated sexual desire, there’s a cheeky subliminal shot of an erect penis.

The image from the prologue that lingers most prominently is the one of the boy looking at the movie screen of the women. Despite Bergman’s disdain of audiences attempting to literalize his work, it’s hard not to assume that the boy is a Bergman surrogate who represents the artist’s attempts to bridge a divide between himself, his extremely gifted actors, and the audience. Most of Persona’s formal grammar suggests an extremist accentuation of the methods on display in earlier Bergman movies, as the film is largely composed of long, intense close-ups that allow you to pour over the actors’ faces and dig into the subtext their expressions may or may not be offering, or even purposefully withholding. (Bergman is exhibit A in the case refuting Orson Welles’s claims that close-ups are for amateurs.) But the prologue casts a pall over the reality of Persona, and of Bergman films in general, and that uncertainty is occasionally reaffirmed, most bluntly when the image dissolves in the middle of the film and appears to start the narrative anew with the actors’ personalities reversed.

The dissolution of the image, at the midway point of the film, is a direct and literal symbol that suggests the classic artistic dilemma of attempting to burn through the constrictions of a chosen medium so as to directly converse with the audience. Bergman’s attempting to fashion his truest film (an ambition that’s mirrored by Elisabet’s ultimately voluntary silence, which initially occurs from a similar anxiety over the fallacy of her performances) by acknowledging the faults of his methods as well as the faults of seemingly every film that’s come before his career; the symbols of the prologue are eventually revealed to exist as art film self-parody of the most agonized sort. Bergman isn’t courting pretension when he says that the narrative truth of Persona doesn’t matter, because the film’s existentialist intensity springs from the quest for truth that, of course, never arrives.

Despite its elaborate meta-game-playing, which has had a pronounced and unquantifiable influence on film culture, Persona remains intensely alive and intimate. The interpersonal dynamics that drive the story may be only one level of Bergman’s master plan, but they still register emotionally in a fashion that’s so overwhelmingly erotic that you’re encouraged to anticipate the indulgence of an easy thriller trope so as to ease tension, such as for the two women to have sex or for one of them to kill the other. But the film leaves you hanging, concluding on a note in which Persona eats itself alive before your eyes. The women may or may not represent the varying personality strands of a singular person, Alma, who’s then revealed to be an actress being filmed by a visible camera so as to provide the footage you’ve just watched. Bergman obliterates his film’s already sketchy reality to show that the morality play you’ve just seen is but a representative patch of the psychological turmoil of the God who presided over it: Him. The film’s success ultimately depends on its failure, then, as it rues Bergman’s inability to entirely reveal, and thus absolve, himself to anyone else. The strain Bergman feels to create reflects the struggle anyone has ever felt to be truly heard.

This transfer’s A/V improvements are most discernable in the film’s plentiful close-ups, as you can detect subtleties, such as skin texture and the reflection of images in eyes, that are valuable and that were never before so explicit. Contrast and clarity are often startlingly bold, as they should be in this film. The Swedish LPCM mono track is pristine and nuanced, and these qualities are particularly explicit when Lars Johan Werle’s unnerving score is at the sonic forefront. A gorgeous, near faultless, presentation.

There are a number of new supplements to this edition that accomplish a remarkably concise job of contextualizing a dense and challenging film. Peter Cowie’s visual essay discusses the fashions with which Ingmar Bergman establishes the film’s entire unsettling modus operandi within the pre-credits sequence. Paul Schrader’s interview considers Persona primarily in relation to the French New Wave, as the film showed that the techniques and methods on display in those movies could apply to wide range of cultural and social experiences. A new interview with Liv Ullmann is poignant, though redundant of many of the sentiments expressed in the various archive interviews and glimpses of on-set footage that are still included and remain of value for providing a coherent portrait of Bergman’s working methods. The only bust is Liv & Ingmar, a 2012 feature documentary directed by Dheeraj Akolkar that fashions Ullmann’s accounts of working and living with Bergman into an absurdly florid and platitudinous love story. One can’t imagine that Bergman would approve. Rounding out the package are the film’s trailer and a booklet that includes a superb essay by film scholar Thomas Elsaesser, an excerpt from the book Bergman on Bergman, and an excerpted 1977 interview with Bibi Andersson.

The godfather of contemporary postmodern art films remains vital, mysterious, and, thanks to Criterion, utterly gorgeous.