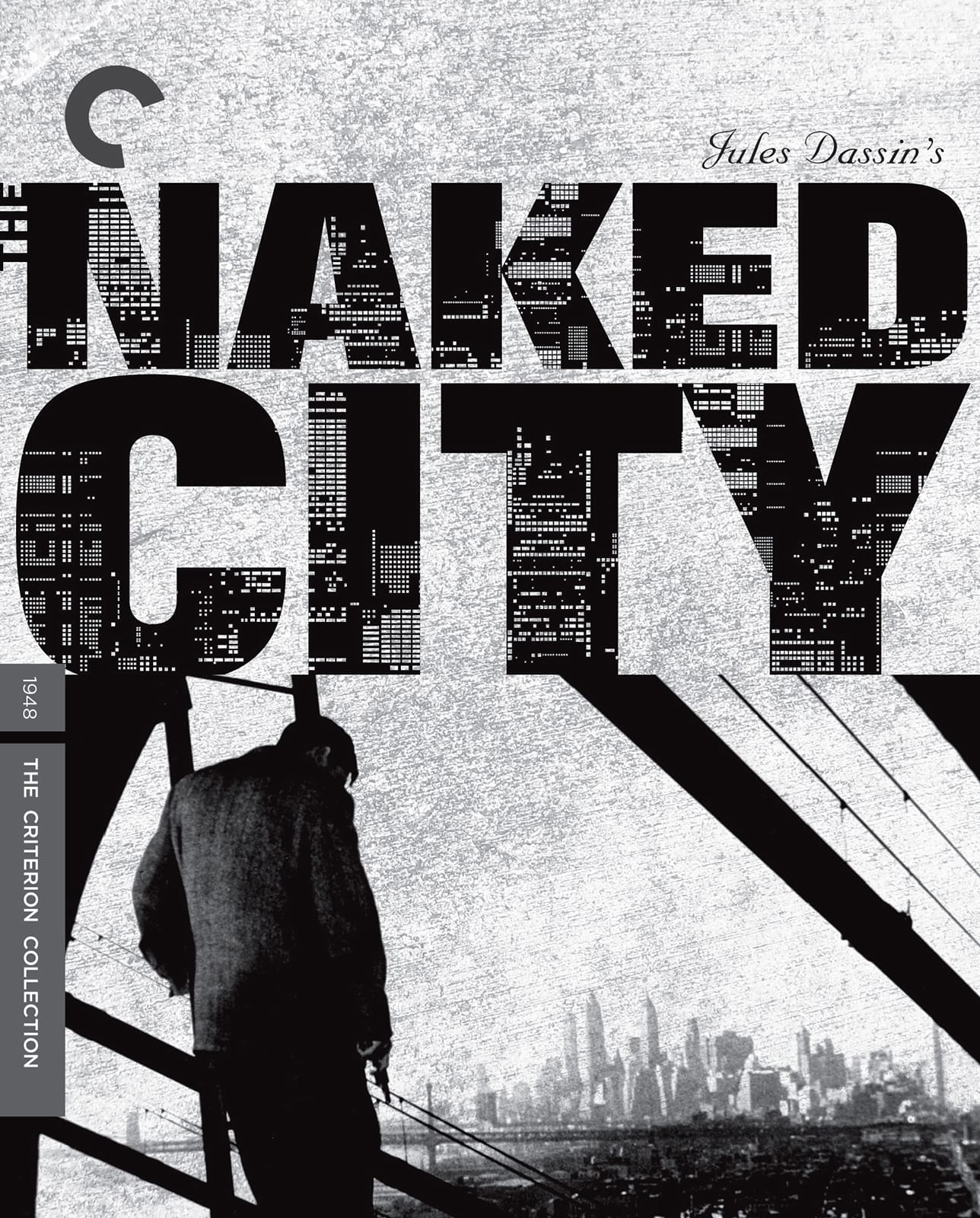 Jules Dassin’s The Naked City was shot in dozens of locations in New York City, offering a vividly docudramatic sense of routine and place that’s affirmed by Mark Hellinger’s initially intriguing but eventually grating narration. The famed columnist turned producer most memorably identifies different neighborhoods and their interlocking relationships, his voiceover complementing anecdotes that suggest the typical lifecycle of the city before a more traditional plot kicks in. Such specificity is thrilling and unusual even today, as cities like New York and Los Angeles are still too often utilized vaguely as shorthand for cinematic myth-peddling. Spare offices, alternately bustling and desolate streets, harbors, and cramped low-income housing inform this film with a quiet and consistent urgency, illustrating in direct physical terms the class tensions that drive the plot. One can draw a direct line from The Naked City to Elia Kazan’s Panic in the Streets and On the Waterfront, as well as Alfred Hitchcock’s The Wrong Man, among others.

The film’s central plot is both revolutionary and sentimental, animated by Hellinger’s desire to translate his folksy columns to the cinema as a celebration of the intertwining infrastructures that comprise New York City as a synecdoche for America. Hellinger’s devotion to this idea allows for details that are now common of police shows and films, as many passages here concern fingerprinting, fabric analysis, and the successes and dead ends that result from interviewing witnesses. However, this sense of specificity doesn’t extend to many of the characters themselves, especially the police, who generally suggest white knights.

The Naked City arrives on Blu-ray alongside Brute Force, Hellinger’s prior collaboration with Dassin, and the films assume fascinatingly different attitudes about social systems, especially law enforcement. Brute Force is set in a corrupt and vicious ecosystem that’s best redeemed, if at all, by revolution, while the police of The Naked City are shown to be a reliable means to a justified end. The hothouse expressionism of Brute Force perfectly suited its attitude and subject, while The Naked City is torn between a radical aesthetic and a tidy theme.

In its emphasis on procedure over character, and on grit as a way to lend verisimilitude to dime-store twists, The Naked City established the template for the seemingly deathless television warhorse Law & Order and its offspring. And The Naked City has the very same limitation as Law & Order, as its fanatical devotion to “the system” squanders the sense of personal obsession and neuroses that drives classic noir and crime films. The film’s inciting incident, the murder of a model named Jean Dexter, is motivated by the usual mixtures of greed and sexual longing that one often expects of the murder mystery genre, but the revelations have no troubling or erotic charge. With one brief exception, Dexter’s absence doesn’t haunt The Naked City as, say, the eponymous victim haunted Otto Preminger’s Laura.

This exception is startling, however, and stands as one of The Naked City’s finest moments. When the investigators leading the case—self-consciously hambone veteran Lt. Muldoon (Barry Fitzgerald) and young buck detective Jimmy Halloran (Don Taylor)—find Dexter’s estranged parents, Mr. and Mrs. Batory (Grover Burgess and Adelaide Klein), the film takes an abrupt and devastating turn into melodrama. The Batorys are small-town folks who resented Dexter’s attraction to the “fast” city, and Mrs. Batory seems particularly steadfast in her assertion that Dexter deserved her fate. When the mother sees the daughter dead at the morgue though, she collapses into tears—an action that Klein invests with agonizing gravity. Here, the film’s structural and technical ambitions are usurped by a scene that frankly acknowledges the tolls of death. Another moment late in the film has a similar intensity, when Halloran finds one of the perpetrators, a stout ex-wrestler, Willy Garzah (Ted de Corsia), hiding out in an apartment so small it casually suggests a cage. De Corsia’s primordial, ravenously embittered energy is unsettling, imbuing the film with authentic suspense while resonantly suggesting how poverty can harden someone in the manner of the prison in Brute Force.

Seen through a contemporary prism, The Naked City is potentially more uncomfortable than it was ever intended to be, as Hellinger’s faith in law and order is charged in an era wracked by existential arguments over the necessity as well as the specific nature of police reform. Halloran and especially Muldoon are fantasies who live to serve and who are decisively troubled by no personal matters or human concerns—charismatic, reassuring ciphers with cute ticks who would influence many future police characters on film and TV alike. Depending on your own political convictions, this fantasy is either poignant, insidiously misleading, or both.

Halloran, Muldoon, and the evil warden of Brute Force are opposing simplifications, then, while the truth of the matter is thornier, unveiled by minute considerations of platform, education, and economic and racial reevaluations that are seemingly impossible to communicate to the mass public, by filmmakers and politicians alike. Yet, The Naked City’s glorious compositions tell their own truth, offering a portrait of a city that’s teeming with honor and evil and decay and beauty, as well as irreconcilable mixtures of all of the above.

Like the Criterion Collection’s recent transfer of Brute Force, The Naked City boasts a new 4K restoration, culled together from many sources, that looks and sounds superb. As with the Brute Force disc, The Naked City’s image has been rendered with revelatory attention to detail. This transfer is a feast of pristine and revealing cityscapes and architecture. Gradations of light and shadow are nuanced and wide-ranging, from the rising sunlight that illuminates a harbor at the cusp of dawn, to the shrill overhead lighting of various office buildings, to the darkness that shrouds the streets at night. Fabric and facial details are also exacting, and the grain here is generally quite healthy, allowing of course for the fluctuations that come with shooting on the fly in an unpredictable environment. The monaural soundtrack is similarly sturdy, and the score by Miklós Rózsa and Frank Skinner has never sounded lusher.

The archive commentary from 1996 featuring screenwriter Malvin Wald, who wrote the story that inspired The Naked City, focuses on the film’s legacy, particularly how it influenced various TV shows and initiated the “buddy cop” template. Wald also shares compelling inside anecdotes on the film’s production, such as actor Barry Fitzgerald’s suspicion that he couldn’t play a police detective because he wasn’t a Humphrey Bogart type.

In the first of two archive interviews from 2006, film professor Dana Polan offers the best criticism to be found in these extras, suggesting that The Naked City’s “blandness” is a direct response to the existential crises facing many men who returned from World War II only to feel like anonymous cogs in machines. The film, per Polan, celebrates working-class life as part of an ongoing, beneficial social project, which would become a trait of police procedurals and distinguish them from the fear and social chaos the typically govern the film noir. In the second interview, author James Sanders analyzes the use of New York in The Naked City, which includes over 100 locations, most audaciously a morgue and the Williamsburg bridge.

In another archive supplement shot at the Los Angeles County Museum in 2004, filmmaker Jules Dassin discusses his illustrious career, including his work with journalist Mark Hellinger. In the disc’s liner notes are a terrific article by Luc Sante, discussing the differing voices of Hellinger and Dassin, as well as correspondence by Hellinger himself on The Naked City’s climactic chase sequence. A stills gallery rounds out a package that practically screams for updated material, especially in an age fraught with talk of police reform.

Criterion has outfitted this seminal but somewhat outdated crime film with a beautiful transfer, as well as supplements that could use an uplift.