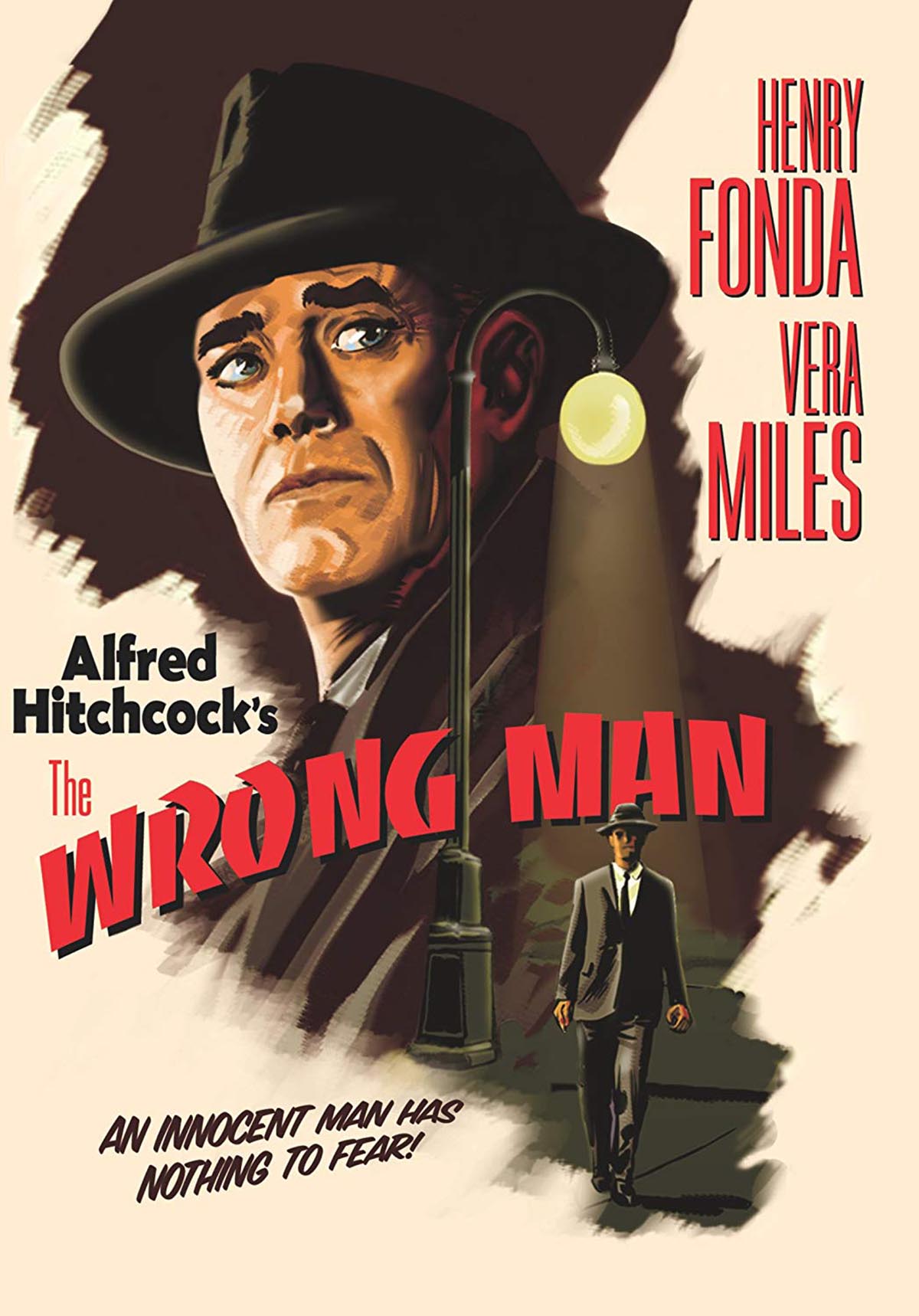 Claims that The Wrong Man is the first film Alfred Hitchcock made based on real events are a tad spurious (Leopold and Loeb, anyone?), but it does find the master far enough removed from his P.T. Barnum impulses that one could be forgiven for thinking its somber gravity represented his first stab at docudrama. In any case, it’s a woefully underrated and truly harrowing study of the psychological cost of misguided suspicion and mistaken identity. Though it came off his mid-‘50s string of flossy big-budget romps, its closest antecedent in Hitchcock’s work is, of course, the courtroom drama of wrongful guilt I Confess, and the final scene’s insistently downbeat pessimism clearly sees Hitchcock steeling himself for the auto-analytical come clean of the immediately forthcoming Vertigo.

Henry Fonda portrays Manny Balestrero, upright bassist at the posh Stork Club of New York City. (If it weren’t true, his instrument of choice would’ve been taken as a cheeky joke from La Hitch—his bass is upright, and so is his conscience.) When he checks on the possibility of borrowing against his wife’s life insurance policy to pay for the extraction of her wisdom teeth, his quiet, humble demeanor is mistaken for menace and his strong resemblance to a different man committing a rash of burglaries leads to his swift arrest, arraignment and, ultimately, trial by jury. (Casting Henry Fonda was a masterstroke. His overbearing angularity and accommodatingly lumbering swagger can just as easily be read as threatening instead of the more likely but paradoxical hyper-masculine meekness.)

Hitchcock’s shadowy mise-en-scène is given a greater sense of veracity through his use of actual NYC locations and simple, almost workmanlike camera compositions (at its most effective, The Wrong Man plays like the best episodes Hitch directed for Alfred Hitchcock Presents, only in excruciatingly brutal slow-motion), and the narrative structure gains considerable urgency through the decision to begin the storyline almost immediately preceding Balestrero’s arrest. The audience is kept at a slight distance from the protagonist and, like his wife Rose (Vera Miles), is forced to take innocence at his word. And when Rose’s mind begins to unravel under the pressure of her own culpability in his alleged crimes (unlike many other Hitchcock characters, the real-life figure of Rose shoulders the guilt without any qualm), the sense of moral responsibility in Hitchcock’s films may have never felt more imperative and succinct. (Which might explain the reason a black velvet Jesus plays such a significant supporting role.)

There’s a little bit of controversy over at DVDBeaver.com over the possibility that the original 1.66:1 open-matte aspect ratio has been cropped for Warner Bros.’ anamorphic 1.78:1 widescreen transfer. If it bothers you enough, start a petition. As far as I’m concerned, this is a fantastic transfer. The presentation is so clear that it almost makes the print look dirtier, because every spec is lovingly recreated. Crisp black and white, and virtually no edge enhancement. Unlike some of the other discs, the dynamic range of the mono audio track is truly expressive (and not mixed quite as low as some of the other discs). Bernard Herrmann’s score emphasizes the upright bass (Balestrero’s instrument) frequently, and the heftiness of the score’s low end is almost shockingly round.

Another 20-minute documentary featurette from Laurent Bouzereau that finds a well-rounded balance between historical context, critical insight, production tidbits, and balls-out Hitchcock worship. For its running time, it’s a brisk and interesting view, but it’s nothing along the lines of a main course. Also included is the theatrical trailer.

Don’t let the sense of “mistaken identity” déjà vu fool you. The Wrong Man is one of Hitchcock’s most affecting tragedies.

Review: Homicide: Life on the Street: The Complete Season 5 on A&E DVD