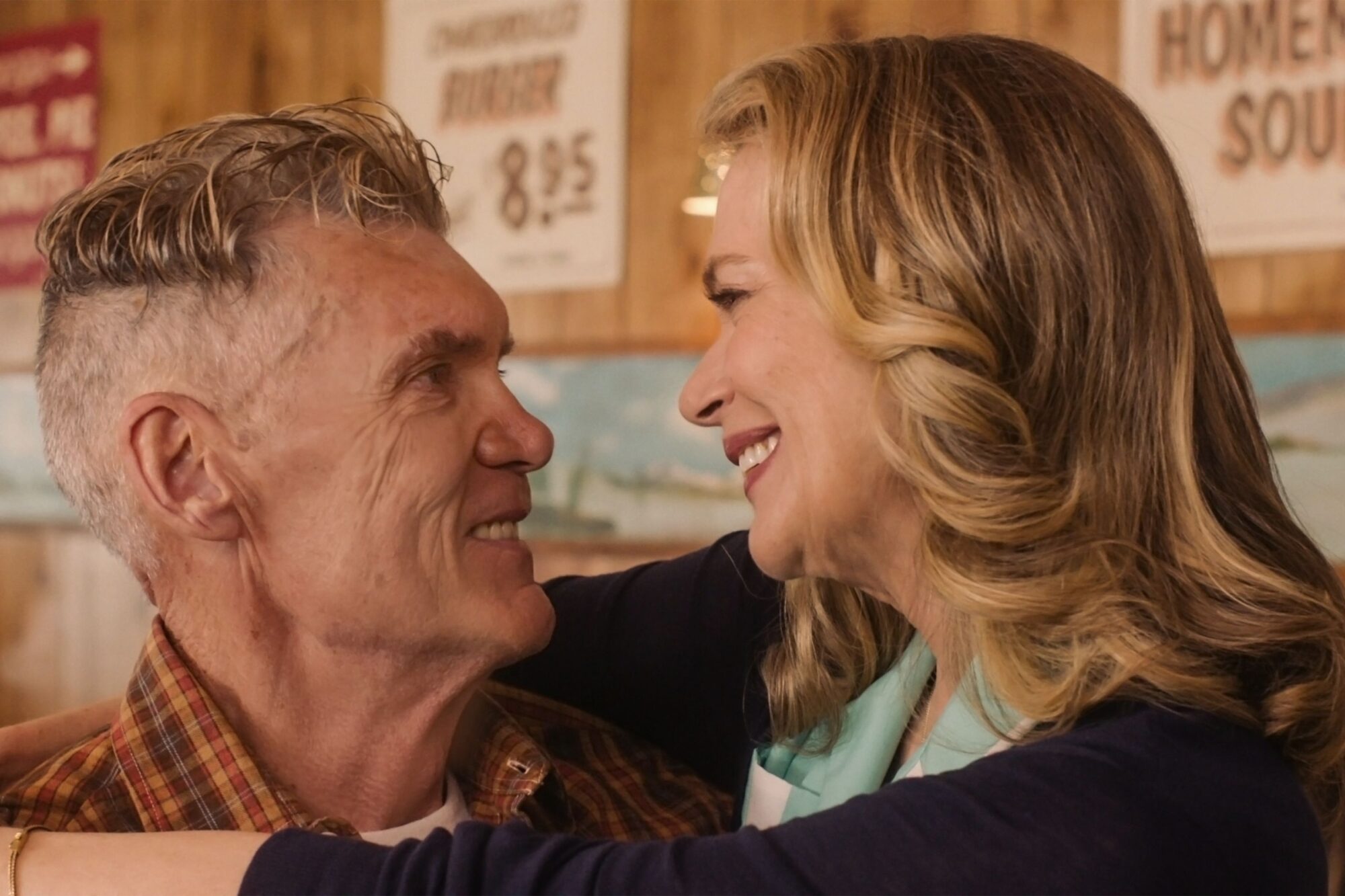 Though it opens with the ecstatic consummation of one of Twin Peak’s longest-running thwarted love affairs, “Part 15” of Twin Peaks: The Return soon after plunges again into a nightmarish spectacle of self-destruction and shrieking madness. The episode also marks the most explicit reference yet to one of the show’s most poignant and haunting themes: the looming specter of ineluctable mortality. Oh, and David Bowie’s Phillip Jeffries finally makes an appearance (of sorts) in the form of a giant, steam-spewing teapot. Even better, we finally get to talk about Judy!

We first see Nadine Hurley (Wendy Robie) striding purposefully down the side of the road to Big Ed’s Gas Farm, her golden “shit-digging” shovel flung over one shoulder, in another of David Lynch’s superbly incongruous opening scenes that function perfectly as a sort of disestablishing shot. Her recent run-in with Dr. Amp has induced a change of heart in the self-confessedly manipulative Nadine, and she’s come to give Ed (Everett McGill) his freedom. But is she motivated by “true love,” as she claims, or is it only the prospect of future happiness with Jacoby that prompts her to relax her hold on Ed?

Whatever her motivation, Ed heads straight to the Double R to declare his love for Norma (Peggy Lipton). Scored to Otis Redding’s “I’ve Been Loving You Too Long,” the impeccably constructed scene that follows is an emotional rollercoaster that first feigns disaster for Ed’s prospects with the unwelcome arrival of Norma’s partner and paramour, Walter (Grant Goodeve), only to ultimately pay off with an unapologetically rapturous resolution to Ed and Norma’s decades of self-denial. Lynch cannily carries the soaring music over as a bridge to exterior shots of mountains and clouds, as though even nature itself were jubilant about Ed and Norma’s union.

Taken at face value, Ed and Norma’s exultant embrace may seem like a moment of unabashed fan service. But this being Twin Peaks, nothing is quite what it seems, and a subsequent scene with Steven Burnett (Caleb Landry Jones) suggests that a dark pall may soon descend over their storybook “happy ending.” Steven and Gersten Hayward (Alicia Witt) huddle together at the base of a massive tree, where Steven contemplates, and then apparently commits, suicide with the gun his wife Becky used to shoot up Gersten’s front door back in “Part 11.” After the shot rings out, the camera pans slowly among the trees, and the discordant rumble of the sound design indicates that all of nature shares Gersten’s anguish—all in a dark inversion of the earlier scene.

This scene implies that Steven has done something to Becky, perhaps in response to her poisoning him with an overdose of Sparkle, one of those “designer Chinese drugs from Canada” mentioned in passing in an early episode of The Return. That would certainly account for his rambling on about going up somewhere to meet the rhinoceros and become like turquoise. Steven’s actions will almost certainly redound adversely on the adoptive “family” that Norma mentions to Walter—especially, of course, Shelly. Walter’s dire predictions for Norma’s future (possibly in more than a merely fiscal sense) don’t do much to inspire confidence either.

Every scene of Bad Dale (Kyle MacLachlan) driving at night, his vehicle’s front end gobbling up that double white line, calls to mind Lost Highway, Lynch’s inscrutable ode to split personalities and murderous intentions. But the doppelganger’s subsequent journey “above the convenience store” (last glimpsed in “Part 8”) also exhibits that film’s preoccupation with traversing impossible spaces. There it was the disorienting domestic labyrinth of the Madison residence, whereas here it’s a way station between dimensions.

Thus far, The Return has been riddled with references to Twin Peaks: Fire Walk with Me, but they’ve never been sustained in so thorough (and thoroughly gnomic) a manner until this sequence. As we’ve seen before, the woodsmen occupy a space wallpapered to match the painting Laura Palmer received—and had a Stendhal syndrome experience of—in the prequel. Here we also catch a glimpse of the masked Jumping Man (Carlton Lee Russell) seen in the film during Phillip Jeffries’s recollection of what goes on above the convenience store, and the motel parking lot that Mr. C crosses matches the place where Leland Palmer met Teresa Banks in the film.

The doppelganger finally comes face to face, as it were, with Phillip Jeffries in his current steam-dispensing incarnation (voiced by Nathan Frizzell). This involves cannibalizing another scene from the prequel, all about the aforementioned Judy, to illustrate how Cooper and Jeffries “used to talk.” Jeffries tells Mr. C that he’s already met Judy. This very well could be the so-called “bosomy woman” (Malachy Sreenan) who unlocks the door for him. Or it equally as easily could be setting up a surprise revelation still to come.

As so often in the land of David Lynch, the danger of a very real breakdown in communication is exemplified by the capriciousness of a landline connection. Here, answering the phone in room 8 banishes Bad Dale back to the bank of payphones outside the convenience store, where Richard Horne (Eamon Farren) lies in wait. Richard finally confirms the maternal side of his parentage, but leaves tantalizingly unanswered whether or not this encounter with Bad Dale marks a historic father-son reunion.

“Part 15” also sees Lynch going increasingly meta. The moment that finally provokes some initiative out of Cooper (MacLachlan) has him switching on the TV just at the moment in a broadcast of Sunset Boulevard where Cecil B. DeMille ushers the fatally misguided Norma Desmond out of the soundstage. Her line about getting “the old team together again” is quickly followed by DeMille’s order: “Get Gordon Cole.” Lynch here acknowledges one of his key inspirations in a canny nod that also spurs Cooper into action. Will the resultant fork-in-the-electrical-socket bit signal Cooper’s full reemergence from near-catatonia, or simply put him into an Audrey Horne-esque coma?

By far the most gut-wrenching scene in “Part 15” combines the episodes dual concerns: the perils of communication and an explicit reference to the so-called “reality” outside of the show. In the last of her telephone chats with Hawk (Michael Horse), the Log Lady (Catherine E. Coulson) tells him that she’s dying. Her line about the unreliability of the phone, that Hawk knows what she meant when they met in person, echoes the famous quote from 1 Corinthians. Earthly knowledge is seeing “in a glass darkly”; what we know about the afterlife, we will know when we meet our maker “face to face.”

The next scene gathers together the core of the Twin Peaks Sheriff’s Department to commemorate her passing away. Heads are bowed, hats taken off. Lucy’s shocked “The Log Lady’s dead?” certainly stands in for what many fans must’ve said to themselves when they first heard about Coulson’s death. But this extra-dimensional recognition isn’t merely echoed in the scene. The episode’s in memoriam is to Margaret Lanterman, complementing the first episode’s to Coulson. By memorializing a fictional character in the end credits, where a TV series typically acknowledges its very real contributors, Lynch manages to implicate his audience in the unfolding dream that is The Return. We, too, are the dreamer mentioned in “Part 14.” But keep in mind the line spoken by Duke Leto Atreides in Dune: “The sleeper must awaken.” The course of the next three episodes will reveal to us just how rude (or enlightening) that awakening is meant to be.

Game of Thrones Recap: Season 7, Episode 6, “Beyond the Wall”