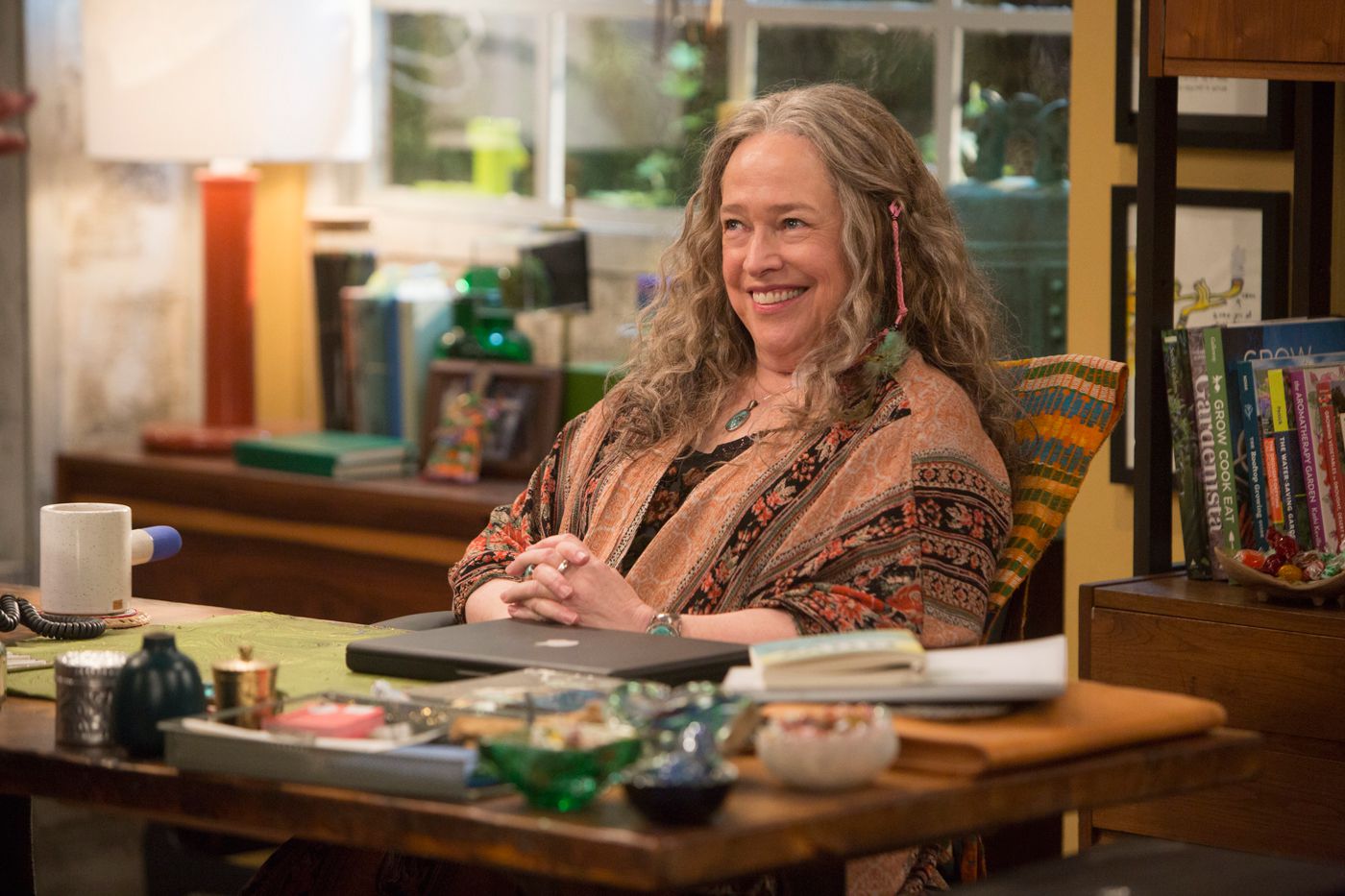 A multi-camera sitcom about a California marijuana dispensary, Disjointed shares more DNA with a bland 1990s TV comedy than an anarchic stoner film. The series follows Ruth (Kathy Bates), an aging legalization activist turned dispensary owner who processes the dulling of weed’s cultural edge as a dulling of her own. She treats the creeping influence of capitalism as an assault on her hippie identity, and the series frames her existential crisis as a joke. Flashbacks reveal Ruth vaguely protesting “the man” and staging her proclaimed subversiveness with a band of unfocused stoners.

The overarching idea of Ruth as an ineffectual eccentric is consistent with the show’s skeptical presentation of its dispensary setting. The series brings to mind Cheers, which romanticized the neighborhood bar as a place where functioning adults go to idle, cope, and mingle with friends and lovers. Disjointed, in slight contrast, presents Ruth’s dispensary as an island of misfit toys, populated by characters who rejected the ambition of their parents and who are content to simply get high and waste the day away.

The exception is Ruth’s son, Travis (Aaron Moten), a recent MBA graduate and traditional high achiever. Ruth meets his ideas for moving the dispensary into the future with derision, as an affront to her conception of marijuana as subversive and holistic. Their barbed interplay feels manufactured and illogical, as Ruth’s aversion to commerce is incongruous with the organized, clean, and thriving store she operates.

Ruth greets customers with a groan-worthy pun—“How can we healp you?”—and launches into diatribes about the healing properties of weed. But the idiosyncrasies of Ruth and her “budtenders” stand in stark contrast to stock actions culled from sitcom convention, from the squabbles between Travis and Ruth that come down to platitudes about trust and parental pride, to the will-they-or-won’t-they sexual tension between Travis and a co-worker.

The show’s straight-and-narrow framework entails somber diversions when conflict arises in scenes that adopt the unmistakable cautionary tone of “a very special episode.” These drastic shifts in tone, from unbearable lightness into bleak topicality, are disorienting, especially when Ruth and her employees hold an intervention convincing a co-worker to start smoking weed. That premise suggests an ironic subversion of sitcom tradition, but the intervention here is deadly serious, focused on Carter (Tone Bell), an Iraq War veteran with PTSD who works security for the dispensary.

At times, Disjointed approaches satire, but it’s never clear who, or what, is the target. The show’s writers lampoon burnouts and YouTube stars in scenes featuring Dank (Chris Redd) and Dabby (Betsy Sodaro), an obnoxious couple who document their coughing fits and smoking experiments online. Later, the series targets straight-edge culture by introducing a cringingly unfunny Tae Kwon Do instructor who, of course, is tightly wound and hurls insults along the lines of “snurfin’ blounts” and “hemped out burn-pots.”

Disjointed also occasionally appears to be satirizing situation comedy as a concept, with its jarring tonal shifts, adult language, and niche setting. Still, fealty to sitcom tradition prevents the series from landing substantial comedic blows against its adopted format. The writers pepper the show’s sight gags and glib interplay with curse words and poop jokes, none more grating or one-note than the dispensary employees repeatedly referring to pot brownies as “shit pies.” But the doses of blue humor are broad and arbitrary, not pointed enough to break through the show’s old-fashioned sensibility.

The series is a weightless diversion, apparently aimed at an audience that will buy California as an alien land full of kooks and eccentrics, and laugh heartily at the word “shit.” Which is unfortunate, since Bates balances Ruth’s eccentricities with a believable humanity, imbuing the character’s romantic ideals about marijuana and activism with real conviction. She punctuates that warmth with a singular aptitude for profanity, and her loud, imposing presence makes Ruth the only character here whose quips have teeth.

Bates convinces as a hippie trying to resist transforming into a curmudgeon, and her performance would truly soar in a show that endeavored to contrast Ruth’s charisma with a sincere exploration of her flaws. But Disjointed refrains from such inquiry, feigning intelligence through vulgarity and unfocused irony.

Review: The Tick: Season One