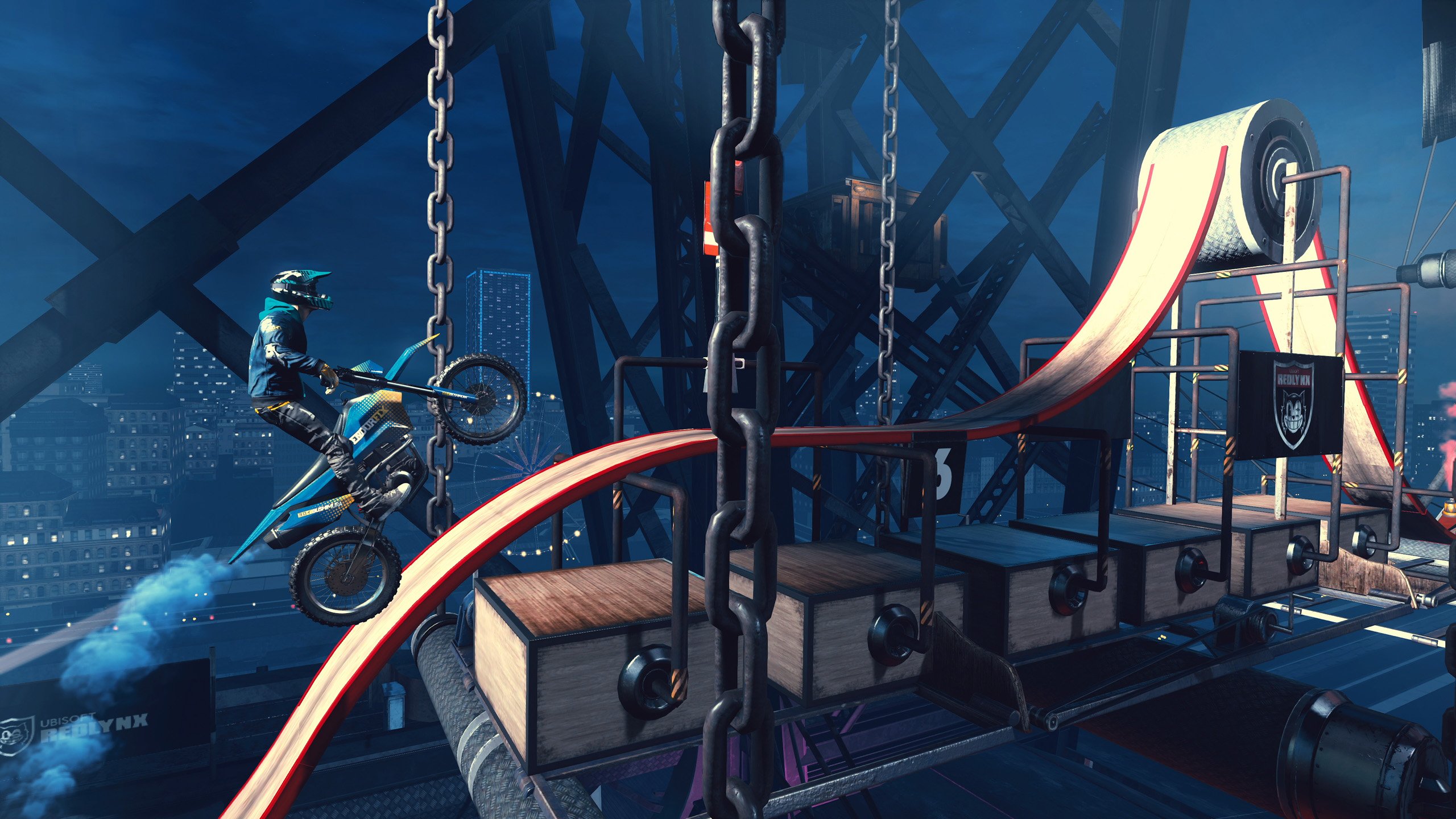 Unless you’re a master of physics, just hitting the gas in a Trials game is to throw the dice on an infinite number of pratfalling failures. The latest entry in the series, Trials Rising, doesn’t rock the boat in terms of its mechanics. After two games of throwing new ideas at the wall to see what sticks, and to varying degrees of success, RedLynx has gone back to the basics. There are no futuristic shenanigans, no Contra-style run-’n-gun sections, no winking anime homages. Here, it’s just you, in a bitter conflict with the laws of physics, trying to get your motorbike across the finish line of 100-plus diabolical motocross tracks.

Twisting and turning your way through your average Trials course and edging out opponents along the way is only half the battle, as you’ll also need to keep yourself balanced while performing precarious and often unwieldy platforming skills, and with almost balletic precision. But this time around, you’ll get a lot of help through a new mode called The University of Trials, and it’s almost exactly what it sounds like: a full-fledged school that, instead of dumping concepts on you all at once, doles out meticulous lessons on advanced riding techniques in a manner that scales with what the player will actually face across each level. It’s an elegant and long-overdue boon to the series’s infamous difficulty.

Trials Rising also improves on its forebears in its sheer variety. Previous games in the series kept you confined to drab warehouses, or over-the-top G.I. Joe-ish locales in the case of Trials of the Blood Dragon. This game takes you on a world tour, from tree-lined dirt roads in America to breathtaking aerial courses in the shadow of Mount Fuji. You’ll slide through sewers and fly through hot-air balloons. You’ll crash Hollywood sets in the middle of productions being filmed, and avoid catapults in the middle of La Tomatina in Spain. The locales are plentiful, and the way each level seems to weaponize a place’s iconography against you time and time again finds the game at its most wildly creative and entertaining.

Because of just how much skill is required to overcome even minor obstacles in a Trials game, it’s always been gratifying to just be able to cross the finish line. Challenges that place a time limit on the tracks or force players to find secret routes, buttons, or items have always been available to the player, but only as an option. Here, though, you’re challenging ghost opponents for the best time, or trying to complete sponsored contract objectives (like doing a set number of backflips during a track), or having to finish a course without hitting the reset button. In Trials Rising, there’s no turning these objectives off to just run a course for the sheer joy of it. There’s always an added, required goal, and the game finds ways to embarrass you should you fail to meet any one of them by the end of the track.

Granted, revenge is a powerful motivator, and there’s a certain sneering satisfaction to defeating everything the game throws at you on a particular track, but the looming specter of humiliation pales to your true and lamentable master in Trials Rising: the grind. Every win, every placement, every challenge met, every completed contract gives you XP and a bit of money. Leveling up is the only way to unlock all of the game’s tracks, and while things start equitably enough, after a time, the goalposts to the next level get further and further apart, while the amount of XP you earn, even for the trickiest tracks, doesn’t scale appropriately.

Meanwhile, beyond access to new tracks, leveling up nets you loot boxes full of cosmetic items to customize your driver and his or her bike. You can hope for new clothes, new emotes, or bike parts, and nine times out of 10 you get a nondescript sticker to slap on your driver’s clothing or bike, or a duplicate part which the game doesn’t automatically trash for you. You could use your earned money to buy the emotes, at least, but the cost for even one emote using money earned doing challenges is absurd. Alternately—and of course this is the case—you can spend some real-world money to buy acorns, a third currency specifically for emotes.

If that song and dance sounds awfully familiar, it’s because it’s the same one that’s made the latter stretches of almost every Ubisoft-published title for the last two or three years feel so artificially padded. A large portion of Trials Rising’s content is gated off to all but those dedicated to playing this game and only this game for the foreseeable future. That might fly in an ongoing multiplayer epic like For Honor, but it feels counterintuitive in your typical Trials game, which is at its best in short bursts, allowing you to bask in a job well done for a while without the constant pressure of making you feel like you need to do more. Fortunately, Trials Rising’s gameplay is so rock-solid that it’s hours before that specter makes itself known, and until then you can just enjoy jet-setting around the world making a genuine Wile E. Coyote of yourself as you get hurled at bone-crushing speeds into walls.

This game was reviewed using a download code provided by Ubisoft.

Review: Gabe Cuzzillo’s Ape Out Is a Masterpiece of Reactive Play

Review: The Stillness of the Wind Is a Poignant Elegy for a Life of Purpose