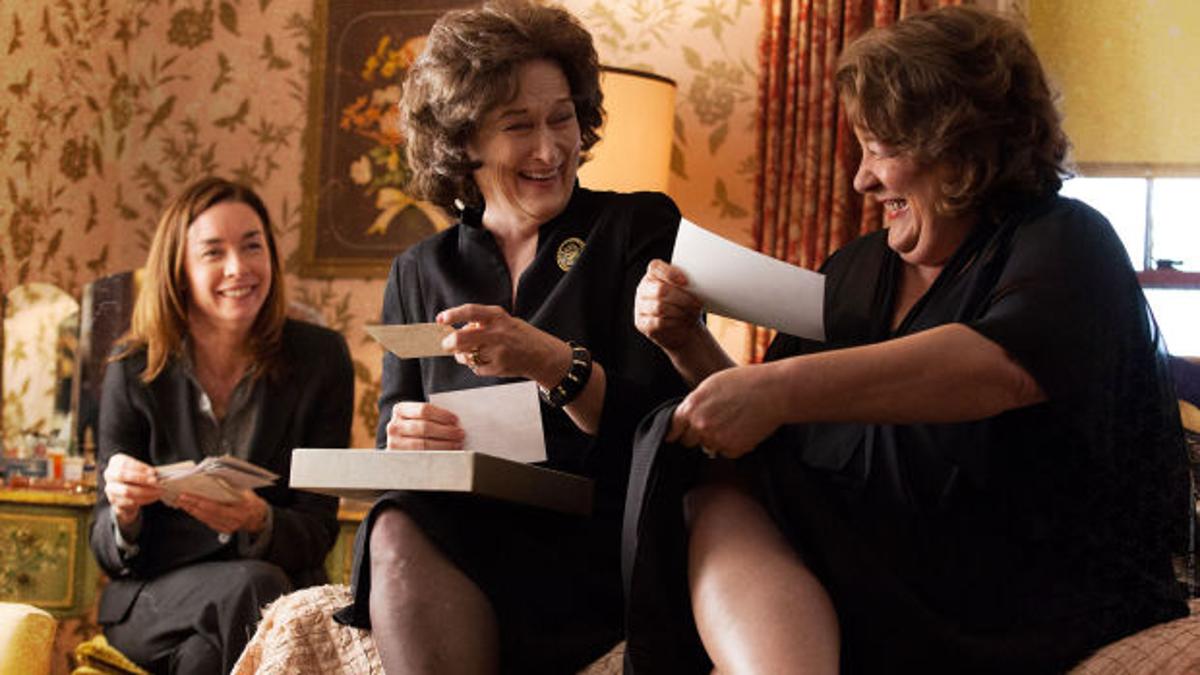 The process of adapting the Pulitzer- and Tony-winning August: Osage County, Tracy Letts’s vitriolic epic of familial dysfunction, poses, to borrow a phrase from one of its characters, quite a Gordian knot. With its icky revelations, not to mention the fact that nearly every character in the large ensemble is either a naïve nitwit or an aggressive asshole, the material isn’t exactly audience-friendly. Summer Stock with a score, the film gets to the meat of the play while slightly compromising its darker, murkier undertones. Instead of transcending the source material, John Wells, whose only previous feature is The Company Men, toys with packaging the material in a way that maintains the play’s themes while remaining cautious of its vituperative vigor.

The story concerns the sharp-tongued Weston clan, gathering for the first time in years following the death—likely, a suicide—of the family patriarch, Beverly (Sam Shepard), a hard-drinking poet who wasted away in the hallways of an Oklahoma university but whose decency was always understood. Decency, it would appear, is a rather foreign concept to a majority of his family, which includes abrasive, pill-popping matriarch Violet (Meryl Streep) and her three disparate daughters: irascible Barbara (Julia Roberts), level-headed Ivy (Julianne Nicholson), and ditzy Karen (Juliette Lewis).

It’s more informative to have listed the characters, along with the adjectives that encapsulate their finely defined personalities, as plot isn’t essential here, and certainly doesn’t need to be, as the narrative’s drive comes from the interpersonal dynamics explored within the verbal pugilism that rattles the skeletons in the family’s closets. Wells appears to be saddled with the task of not only expanding on the film’s stage-bound origins, but also capturing a tone of accessibility to a family that bullishly resists relatability.

But despite the material’s indulgence in Edward Albee-ish familial aggression and light flirtation with satire, the tone of the filmmaking here is closer to the tidily choreographed head-to-head combat of John Patrick Shanley’s Doubt than to the acerbically stylized madness of Who’s Afraid of Virginia Woolf? Fortunately, the cast is uniformly tight. In true ensemble fashion, the actors charitably feed off each other, and none of them step on each others’ toes—the apt exception being Streep, whose soul-devouring matriarch’s favorite pastime is callous interruption and one-upmanship.

Much of the action still exists in the overheated claustrophobia of the Weston household, yet footage of the rolling Oklahoma fields, characters in cars, and other exterior shots distract as opposed to elaborate on a setting that’s meant to be suffocatingly insular. Most egregious is one scene in which Violet, on the verge of vomiting, exits a car and desperately runs into a field of haystacks, lunging for the horizon and flailing her arms as the music swells. The moment, so weakly melodramatic that Violet would likely roll her eyes at it, lacks the fluid self-awareness that Wells does an able job of capturing in the more tightly confined scenes (especially in the play’s infamous dinner scene). Still, the sprawling Weston household provides a fine diorama.

The relative quality of generational family abuse, a prominent motif in the play, still comes through loud and clear. For every horrible criticism or discouraging epithet Violet throws at her so-called “entitled” children, she claims her mother inflicted worse. As an observation of transference, the film isn’t particularly subtle; Wells and Roberts, especially, articulate a bit too clearly Barbara’s near-transformation into a similarly monstrous character in the final act. A brutal playfulness would’ve elucidated more clearly instead of the shrill shouting matches that play out toward the film’s close.

The source material’s missing humor represents the most neutered aspect of this adaptation, as if Wells had balked at the idea of having to balance outrageously nasty sparring with black-hearted laughs, fearing it would be impolite for the audience to snicker at the deeply incisive judgments the characters bandy about. Wells prioritizes performance over clarity of its piquant dialogue, which slightly waters down the cleverly callous wit the play put front and center. Therefore, this serviceable version of August: Osage County falls short of the powerhouse, painful punch-in-the-gut moxie the material requires to overwhelm. It pokes and occasionally stabs, but doesn’t twist the knife as much as it should.