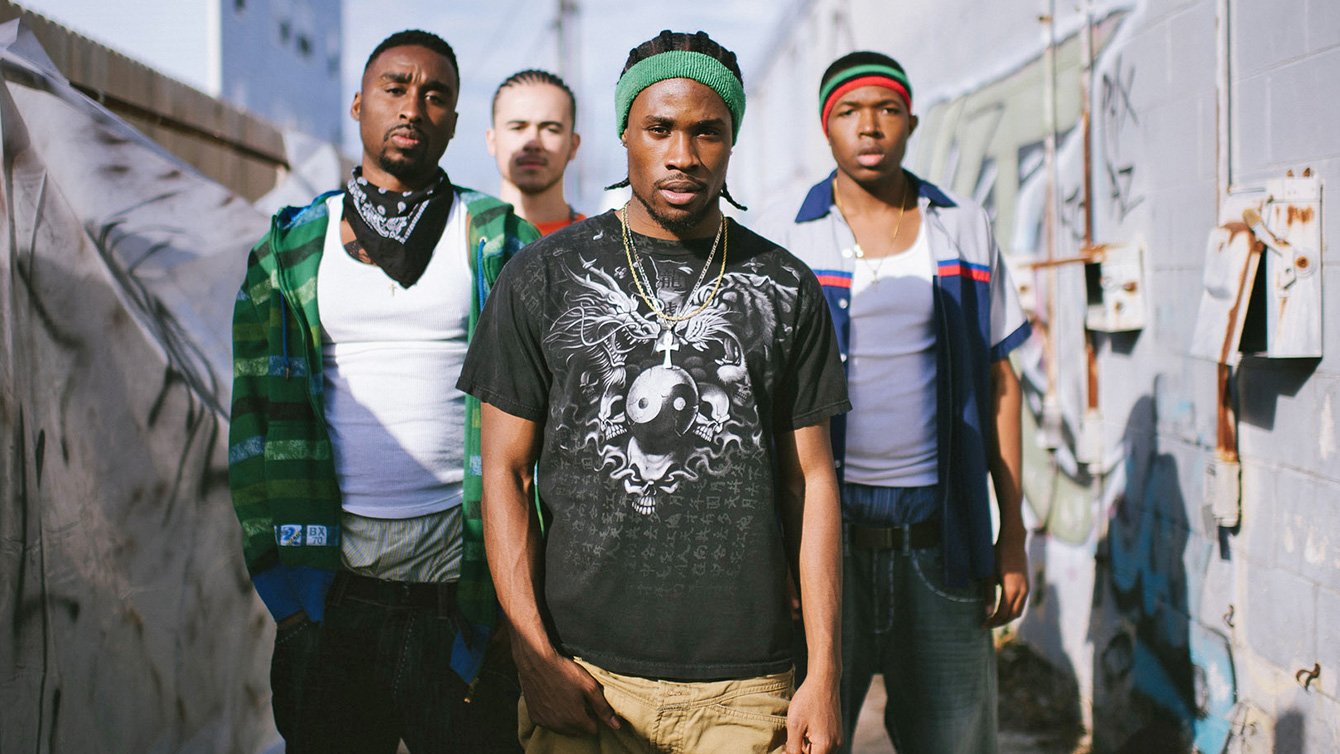 RZA’s Cut Throat City, about four desperate young men who’re compelled to rob casinos, isn’t a regurgitation of heist-movie tropes. The principal heist occurs early on in the narrative, with few scenes building up to it, and ends casually and quickly in disappointment and disaster. Most heist movies culminate with the antiheroes failing, but they usually allow us to believe that the characters might get away with it. The genre often offers suspense and revels in fleeting illusions of power, though RZA and screenwriter P.G. Cuschieri are more concerned with the class system and social values that inspire fantasies of high-scale robberies—on the part of both crooks and ourselves, vicariously, as audience members. Following such a thread, the filmmakers spring surprising and uncomfortable observations, fashioning a film that suggests a livelier version of Steve McQueen’s Widows.

Cut Throat City is set in New Orleans in 2005 in the aftermath of Hurricane Katrina, predominantly in the lower 9th Ward, which was hit hard by the disaster. RZA opens the film on Katrina footage, rich in images of powerlessness and destruction, and segues into a kinetic animated opening titles sequence in which black avengers slay white oppressors with scythes and other blades, staging an insurrection. This animation is revealed to be part of an independent graphic novel created by Blink (Shameik Moore), who dreams of living as an artist. Blink is sitting in a van with the book, getting drunk and high with his friends, who debate the importance of fantasy and reality in entertainment. The owner of the van, Miracle (Demetrius Shipp Jr.), believes that art should keep it real, avoiding “over-the-top Tarantino shit,” which leads to a few choice words about Reservoir Dogs and the use of the n-word, or, per Miracle, the “n-word threshold.” These scenes are loose and lively and seem at first to exist mostly for the sake of profane amusement, though they foreshadow the film’s blending of cathartic ultraviolence with the reality of nesting forms of oppression.

Reservoir Dogs is a ferocious thriller that, like most Tarantino films, doesn’t exist in even a facsimile of the real world. It’s an insular, apolitical hall of B-movie mirrors fashioned by A-level talent. And this apathy is at odds with what RZA, a kung fu aficionado and the de facto leader of the Wu-Tang Clan, who produced and orchestrated the Kill Bill soundtrack, does here. Blink, Miracle, and two of their other friends, Andre (Denzel Whitaker) and Junior (Keean Johnson), the latter of whom is the sole white guy in their group, aren’t conventional tough guys. They’re bitter and hopeless, as well as convinced that the government’s failure to help the 9th Ward represents a kind of backdoor gentrification. Yet RZA resists a temptation indulged by many an earnest filmmaker by refusing to pity these men and turn them into martyrs entirely at the mercy of the “system,” recognizing such thinking as inadvertently condescending. Instead, he shows how a labyrinthine society helps these men to screw themselves, and how these men, like many of us, hate the system but subscribe to it anyway.

Widows was driven by similar themes, which McQueen allowed to get the better of him, as his film is a humorless, stultifying slog. By contrast, RZA is able to casually invest thrilling genre-film stand-offs with political texture. The violence never quite comes when you expect it, and Cut Throat City’s funky atmosphere captures the despair as well as the beautiful and dangerous debauchery of New Orleans. The first casino heist, ordered by Cousin (T.I.), a drug dealer related by marriage to Blink, is essentially an inciting incident that propels the young men into the underworld of the city in which criminals, politicians, and police officers cohabitate, deciding the fates of the poor and clueless with the bored flippancy of Caesars.

Wherever they go, the gang finds various shadowy figures who insist on explaining themselves, rationalizing the corruption in a manner that reflects the men’s own entitlement back to them. In the purview of most of these characters, the biggest problem with robbing a casino is that it’s an act of working hard, not smart. And the casino robberies parallel their subsequent investigation by an earnest cop, Lucinda Valencia (Eiza González), which is similarly beside the ultimate point. In a conventional narrative, Lucinda might be the hero, but in Cut Throat City she distracts from the true, subterranean dispensations of authority.

Cut Throat City’s action scenes are brief and jolting, existing as punctuations between often magnificently strange palavers. (Cuschieri’s dialogue has a distinctive, lurid snap.) Cousin grooves on finding a way to turn racist capitalism to his advantage, resenting the young criminals’ self-pity. And T.I. invests a potentially clichéd character with a hushed, terrifying playfulness, allowing you to see Cousin’s pleasure in his own mercenary power. The Saint (Terrence Howard, in his funniest and most electrifying performance since Hustle and Flow), a drug lord higher on the food chain than Cousin, expresses his authority in a similar fashion, though with an elegant pomposity that parodies his religious front. Characters keep popping up and surprising you, especially Cowboy (Rob Morgan), a cop who snorts coke in front of other officers and who’s so flagrantly debauched that he’s amusing and scary—to the other characters as well as the audience. More poignant is Jackson (Ethan Hawke), a drunken councilman on whom RZA lingers, especially as the man weeps, talking of his guilt to his wife’s grave. Yet he isn’t too guilty to call on Cowboy when necessary.

The film’s elder statesmen upstage the characters who’re theoretically front and center, often pushing them out of their own story—a structural peculiarity that resonantly suggests their powerlessness and cluelessness. The film is more immersive than suspenseful, and at times you may wish that RZA would pick up the pace after, say, the 10th soliloquy on the hypocrisy and irony of the American power structure. But Cut Throat City is still an ambitious and volatile film, an atmospheric survey of the thankless world of the rich and the damned.

Review: Peninsula Is a Halfhearted Encore to the Propulsive Train to Busan