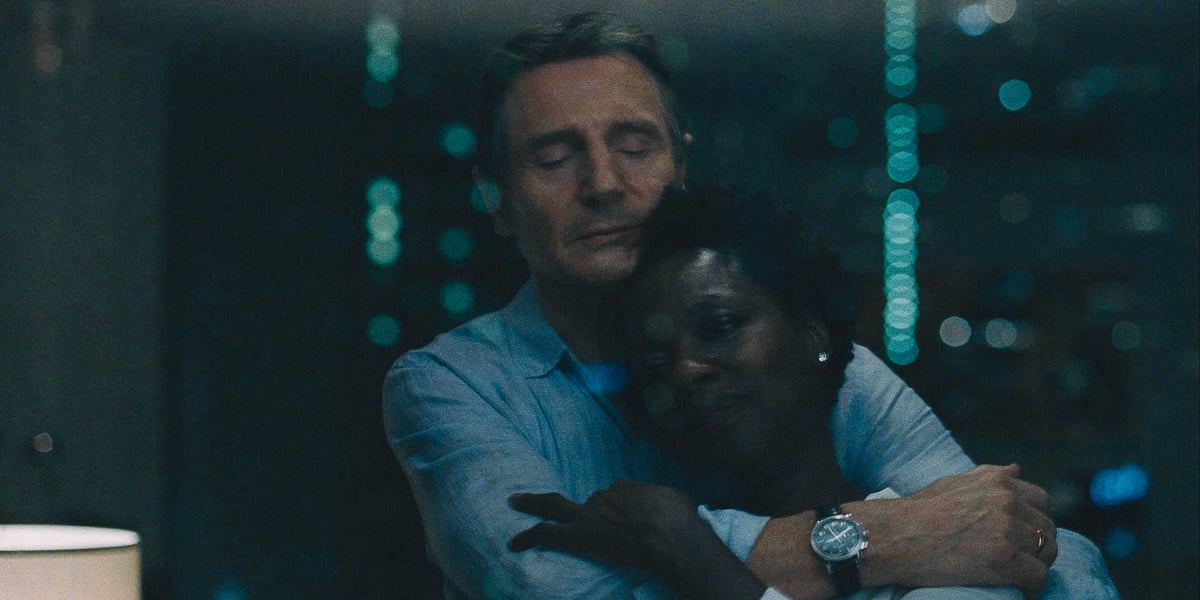 Though it’s a stark departure from his usual austerity of presentation, Steve McQueen’s Widows unmistakably bears the filmmaker’s stamp starting from its very first scene. Cross-cutting between a loving morning interlude between Veronica Rawlins (Viola Davis) and her husband, Harry (Liam Neeson), and a disastrous getaway following a heist organized by the latter, McQueen sets elegant, advertisement-ready images of hands entwined on bedsheets against jittery shots of Harry’s crew shooting at their attackers, the soundtrack deafening with the roar of automatic gunfire and squealing rubber. In classic McQueen fashion, the sequence is paradoxically stripped down and overly expository, ratcheting up tension while setting up characters’ background.

This opening culminates in a genuine shock when police catch up to the thieves and riddle their van with bullets, igniting an explosion and killing everyone inside. It’s then that the film shifts its focus to Veronica and the other women widowed by this tragedy as they quickly realize just how precarious their fast-living spouses’ finances were and try to make ends meet: Linda’s (Michelle Rodriguez) clothing store is seized by bookies to whom her husband owed money, while Alice (Elizabeth Debicki) is encouraged by her mother (Jacki Weaver) to join an escort service that caters to wealthy men.

McQueen and Gillian Flynn’s screenplay inundates us with expository detail, introducing not only these characters but a network of acquaintances and local politicians that’s large enough to fill an ensemble TV series. And all this setup culminates with the introduction of Jamal Manning (Brian Tyree Henry), a crime lord seeking to go legit by running for political office, arriving at Veronica’s home to inform her that Harry’s crew robbed his campaign fund and that she has one month to pay back the stolen, now vaporized, $2 million. In her desperation, Veronica finds one of Harry’s notebooks detailing a planned heist and decides to recruit her fellow widows to pull off the job.

As ever, McQueen assembles a powerhouse cast, only to treat some of them as models to act out a limited range of expressions while being posed, just so, for his exacting compositions. As the threatening Veronica, Davis is well within her wheelhouse as a cool, collected leader, but too often she’s stiffly arranged in tableaux of suffering. Numerous shots see her standing against glass and staring mournfully as Harry’s ghost materializes and comforts her. Elsewhere, Daniel Kaluuya is underserved as Jatemme, Jamal’s brother and chief enforcer. The actor’s sharp features and penetrating stare lend themselves to mystery, so it’s disappointing that he’s at the heart of the film’s two most ostentatious and hollow set pieces, both involving a single take that revolves around Jatemme as he either commits violence or oversees a killing occurring just out of frame. These scenes exist only to wallow in their own bravura sense of composition and movement, reducing Jatemme to a glorified prop.

Others, however, are significantly more fleshed out. Alice is initially presented as little more than a skittish, bewildered victim of circumstance, but Debicki carefully modulates her character’s rapidly evolving confidence and competence at gathering intel for the heist to effectively render Alice’s emotional maturation believable. Elsewhere, Belle (Cynthia Erivo), a babysitter who’s gradually brought into Veronica’s crew, attends to other people’s children rather than her own. The zeal with which she takes any and all jobs exemplifies just how out of whack her work-life balance is, and exudes an anxiety that’s befitting of those reliant on the gig economy.

The film’s richest characters, though, are the two politicians running for alderman in a crooked Chicago ward. While Jatemme is a picture-perfect depiction of one-note villainy, Jamal is more fully and fascinatingly realized by Henry. Wearing suits that look like they might tear at any moment, Jamal has the imposing bulk of a man who’s used to grabbing power in more direct terms than kickbacks and favors. However new he is to politics, he has the cold calculation of a lifer, as evidenced by the strong parallels between him and Jack Mulligan (Colin Farrell), the scion of a local dynasty who was obviously meant to be in a position of power for life. Jack’s stated distaste for politics doesn’t stop him from exploiting that power: For all the shame he feels over his feeble father’s (Robert Duvall) racism, he still perpetuates the same brand of discrimination, only using more face-saving measures. His biggest ward initiative involves a PR stunt to empower minority women with small business loans that surreptitiously come with exorbitant interest rates.

The subtle framing of contemporary politics as a mix of old-school gangsterism and neoliberal racist exploitation is one of many social issues that Flynn and McQueen broach throughout Widows, some of which are shortchanged. One character seen only in flashback exists solely to be the victim of an abrupt, awkwardly injected instance of police brutality, while a final attempt to paint Veronica’s crew as empowered simplifies the far more compelling dynamic of mistrust and desperation that first unites the women. Still, even the commentary that falls flat fits within the film’s ambitious attempt to reckon with the myriad, interlocking forces affecting its characters.

Widows abounds in immaculate compositions, with McQueen and cinematographer Sean Bobbitt frequently layering mirror imagery to create multiple angles of a subject within the same frame. But where their work together on films like 12 Years a Slave never found harmony between immaculately constructed examples of cinematic beauty and the gravity of the shocking subject matter being aestheticized, here the pair’s visual precision is in perfect lockstep with a narrative about the exacting nature of heist preparation. For all its flaws, Widows is McQueen’s most fascinating, bracing feature to date, a demonstration of the filmmaker embracing his commercial instincts instead of trying to pass them off as weighty and important. Ironically, none of his prior features has explored its subtext with such depth, nor given such a holistic portrait of its social context.