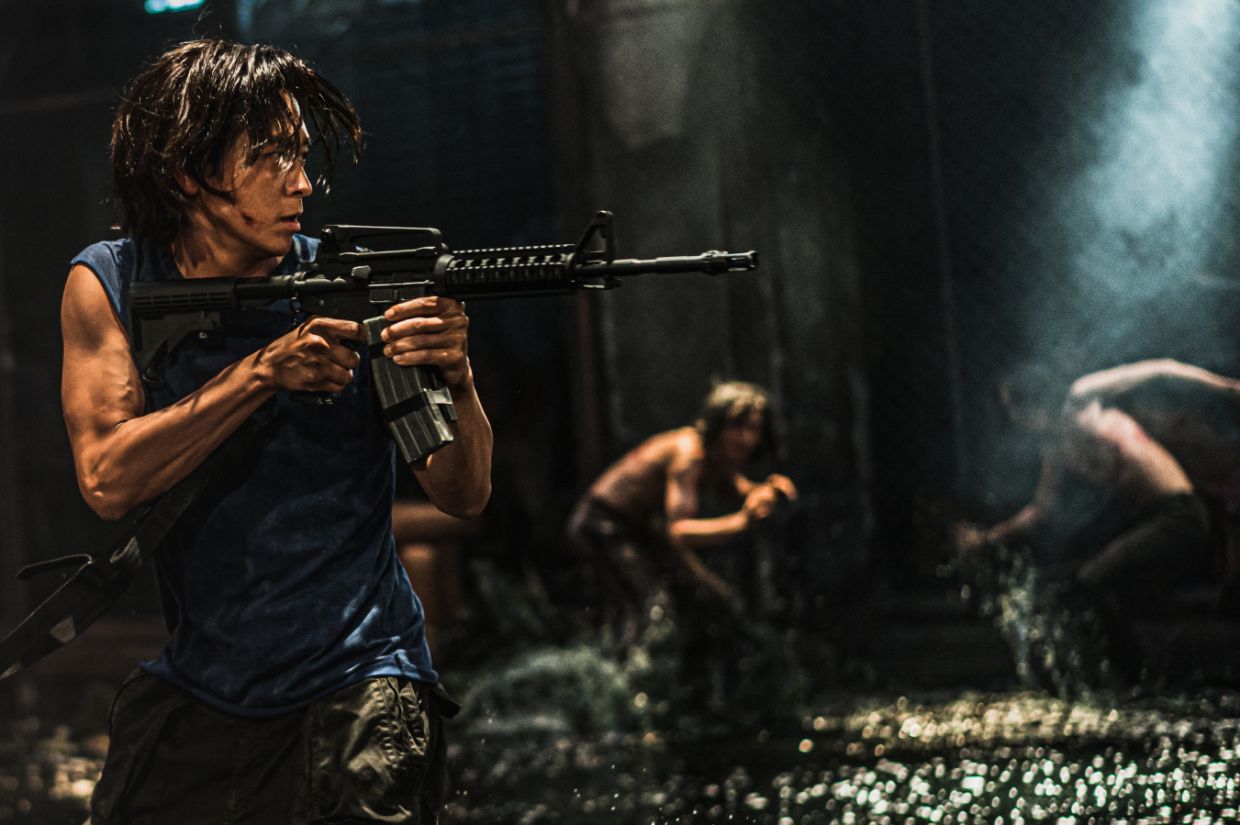 Though it borrows liberally and distractingly from many genre touchstones, the film that Yeon Sang-ho’s Train to Busan Presents: Peninsula most explicitly and inadvertently recalls is Speed 2: Cruise Control. Both films are sequels that manage to refute every lean-and-mean instinct that distinguished their predecessors, instead offering disconnected set pieces within a bloated and impersonal atmosphere. Which is to say that these mediocre formula larks seem to exist opportunistically for the sake of brand management. Apart from featuring zombies, Peninsula is barely connected to 2016’s Train to Busan.

Yeon’s earlier film is a poem of relentless efficiency, an apocalyptic zombie thriller as math equation, with the sort of single-setting gimmick that used to drive seemingly every American action film in the late 1980s and ‘90s, including Jan de Bont’s Speed. Every set piece clicks, moving the film forward, its narrative rivaling the titular train in terms of kinetic momentum. The train served as a microcosm for the class issues plaguing South Korea and many other countries in the world, but Yeon didn’t fuss over that subtext, never preaching to the audience as Bong Joon-ho did in his own train-centric thriller Snowpiercer. In the process, Train to Busan hit notes of true and shivery terror, utilizing the overplayed “fast zombie” concept to suggest that un-death turns people into enraged lemmings, which is a frighteningly astute association in this age of the 24/7 news cycle as perpetual hate machine.

Perhaps wary of the contrivance of a second largely single-setting thriller—though Under Siege 2: Dark Territory, also set on a train, got by surprisingly well with it—Peninsula is structured so that it’s continually hopscotching between locales, mostly post-apocalyptic cityscapes near the Port of Incheon. Yeon springs a wicked joke, suggesting that zombies have tarnished the country in a manner like that of its isolated authoritarian neighbor, North Korea. Otherwise, the sociopolitical implications of this film are more primitive than those of Train to Busan. Essentially, the characters here must learn to be nicer to one another, eschewing selfishness, and such a shopworn sentiment is at odds with the enraged nihilism that Yeon borrows from Escape from New York and Mad Max. Dystopian films are meant to gratify our bitterness and self-pity, and so autopilot personal affirmation feels like a cheat.

Peninsula opens with a soldier making a decision that will haunt him for the remainder of the film. Jung-seok (Gang Dong-won) is fleeing South Korea with his sister (Jang So-yeon) and her husband, Chul-min (Kim Do-yoon), and child (Moon Woo-jin), navigating zombie-plagued backroads in an effort to board a boat to Hong Kong. A family on the road tries to stop Jung-seok’s car, begging him to take their children with him, though he leaves them stranded. These scenes lack punch because they’re clearly setting up a pat moral framework. Yeon doesn’t dare to empathize with Jung-seok’s self-preserving instincts—his feral need to protect his own—as Steven Spielberg did in the similarly themed War of the Worlds.

After this sequence, Yeon spends much time setting Peninsula into motion. Years later, Jung-seok is living in Hong Kong, despised by the locals for hailing from the epicenter of the zombie outbreak—a notion that’s quite resonant given the xenophobia surrounding the COVID-19 outbreak. A refugee adrift, Jung-seok is encouraged by gangsters to return to South Korea, or the “peninsula,” to retrieve 20 million dollars from an abandoned food truck. Jung-seok is accompanied by Chul-min, who resents him for events that unfolded on their way to Hong Kong, and two other characters who are quickly dispatched.

Train to Busan relied on broad characterizations, but the various conflicts popped. In Peninsula, derivatively “colorful” characters wander in and out of the film seemingly at random. Many factions are in conflict here, including a militia that’s established a quasi-feudal rule in the wake of the zombies, but Yeon listlessly cuts between the various narratives, displaying little of the sleek spatial or writerly ingenuity that he employed in Train to Busan. By contrast, Peninsula has an overstuffed generic quality that’s intensified by the murky backlot vibe of its hell-city setting, which is borrowed from many lurid ‘80s thrillers. However, Yeon isn’t able to elevate this self-consciously cheap feel to a minimalist punk fashion statement, as John Carpenter did in Escape from New York.

The film’s action scenes are proficiently staged yet unremarkable apart from one repeated flourish, in which characters make their cars skid so as to bash hordes of zombies around like pinballs. Otherwise, Peninsula is composed of the shoot-outs and car chases that audiences have seen in countless other films, with its zombies gradually coming to feel beside the point. Peninsula feels like the work of an artist who misunderstood his past triumph, squandering his talent for the sake of a pandering, halfhearted encore.

Review: Coup 53 Is a Crackerjack Look at a Anglo-American Coup in Iran