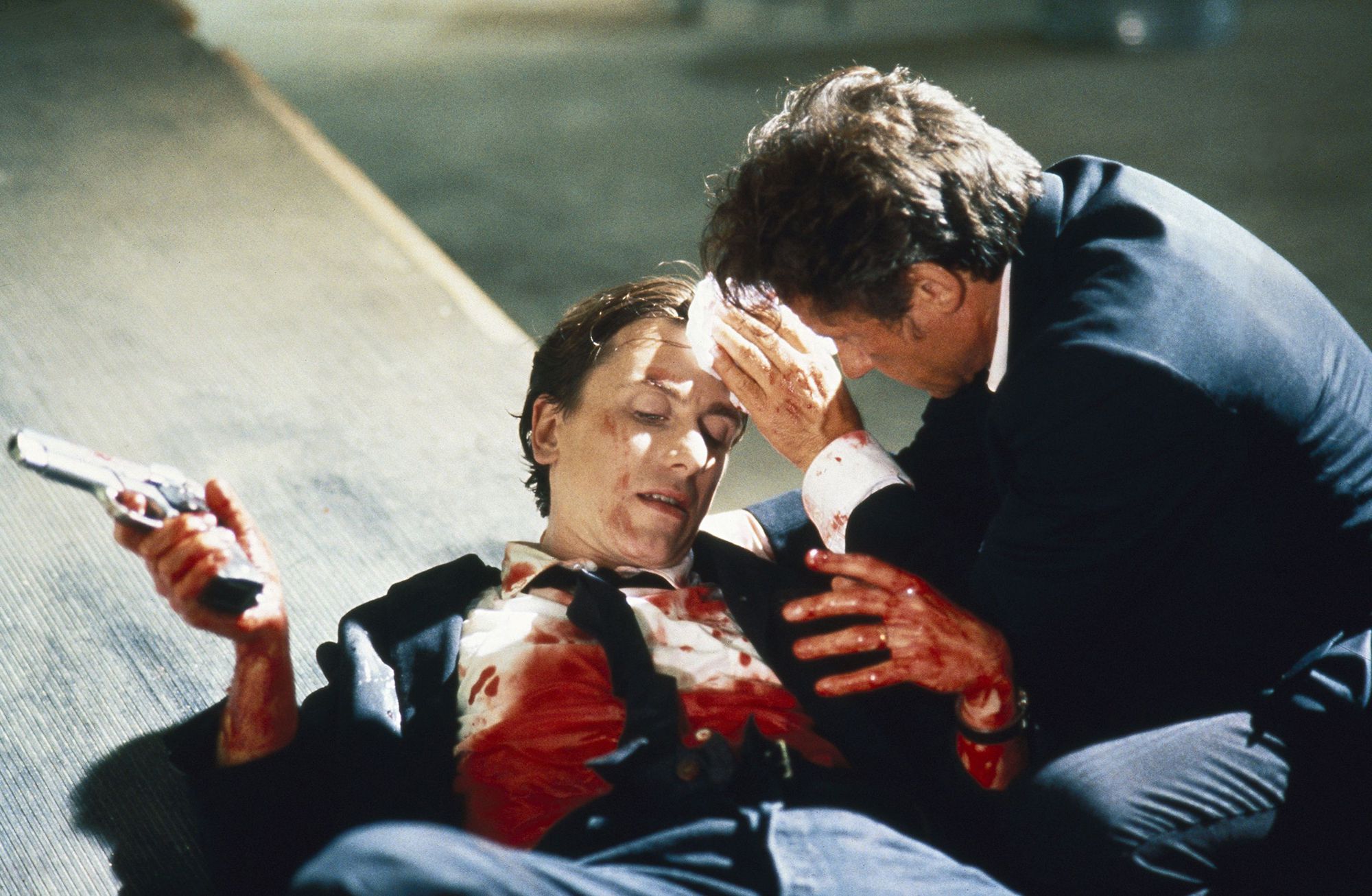 For a filmmaker who once enjoyed a hearty reputation as a bad-boy subversive, Quentin Tarantino has always been awfully eager to please, especially in his early films, which are neurotically obsessed with coolness as pop-cultural vindication. A key moment in Tony Scott’s 1993 film True Romance, which Tarantino wrote, spells this obsession out when Patricia Arquette’s reformed prostitute, Alabama Whitman, repeats, “You’re so cool,” in voiceover as an incantation that embodies a supreme and fragile sort of male fulfillment. Alabama is talking about her unlikely adoration of Christian Slater’s nerdy protagonist, Clarence Worley, who was once a clerk in a comic-book store, which is obviously and consciously similar to Tarantino’s heavily mythologized background as a video-store employee. Like Clarence, Tarantino made phenomenally good on his dreams.

Related to True Romance is Tarantino’s stint hosting Saturday Night Live in the wake of Pulp Fiction’s stratospheric success, where he appeared in a sketch in which he boasted that, as a once overweight clerk ignored by women, of course he sleeps with all the actresses he works with. Tarantino’s early films revel in this association of dwarfed masculinity transcended, as they’re fueled by the energy of a frustrated creative who’s finally permitted to let his emasculated white-boy id run wild. Yet there’s also an insecure mania in Tarantino’s early work, as if the bottom could fall out from under the cool braggadocio at any time. Coolness is unstable and fickle.

As Tarantino’s first film as both writer and director, Reservoir Dogs indicates a remarkably fully formed cinematic sensibility, for both better and worse. It’s a personally impersonal film, which is to say that Tarantino’s fetishizing of objects—coffee, sunglasses, boots, posters, guns, knives, music, movies—and intricate genre situations inadvertently reveal something specific about him, which is his deep and abiding need for these tropes and textures as comfort blankets. An odd vulnerability is inherent in Tarantino’s reluctance to stake out explicitly emotional or political ground—of which he’s aware. And there’s an earnestness in Reservoir Dogs that renders Tarantino’s obnoxiousness palatable, to which QT’s countless imitators have often seemed willfully blind.

Reservoir Dogs is another film about a heist gone wrong, in which a half-dozen profane and entitled white dudes blow each other to pieces with guns that the director never fails to erotize in glisteningly phallic compositions. Racial identity is obviously on Tarantino’s mind. Black women are lusted after by these characters, and the worst thing a white man can be called is by the n-word. This epithet is more disturbingly evoked in Reservoir Dogs than in Django Unchained because the former uses it only a few times, allowing the bitterness and resentment of its utterance to hang in the room, or, in this case, the dilapidated warehouse that serves as the film’s nearly singular set.

Tarantino would profoundly grapple with white men’s uncertain grasp of African-American identity in Jackie Brown, and with the empathetic limitations that might be tragically inherent in relationships between American blacks and whites. In Reservoir Dogs, True Romance, and Pulp Fiction, blackness is a pose—something for a white boy to admire from a fearful distance. Tarantino isn’t unaware of this, but he isn’t truly willing to challenge this sideways racism either. For instance, the prospect of white and black men violently fucking appears to turn Tarantino on; he thinks of such taboo collisions as the height of outrage and a sure way to bolster the bad-boy persona he craves. In terms of pop-cultural reverberations, Tarantino was correct.

In Reservoir Dogs, there’s a prolonged and disreputably amusing moment where Nice Guy Eddie (Chris Penn), the second in command of an operation to lift uncut diamonds from a bank, ribs a friend and cohort, Mr. Blonde (Michael Madsen), for how much he presumes that black cons must have fucked Blonde while he was in jail. This moment thematically connects to Nice Guy Eddie’s remembrance of a waitress who might’ve looked a little like Pam Grier (star of Jackie Brown), who glued her abusive husband’s cock to his stomach. Comedy and racially tinged sex and violence are always linked in Reservoir Dogs, paving the way for the racially motivated rape in Pulp Fiction, which is nearly staged for comedy and has an obscene subtext of wish-fulfilling role reversal. In Tarantino’s world, the white boy gets to be the rapist. (Correspondingly, think of Gary Oldman’s black-thug wannabe in True Romance, whose murder sexually empowered white-dweeb Clarence.)

To look for these sorts of meanings in Reservoir Dogs and Pulp Fiction—to take the films seriously, in other words—is to invite scorn from Tarantino fanboys and even serious critics. Yes, contrary to the insistence of SJWs all over, art should be allowed to be offensive and artists should be able to access troubling parts of their personalities, but we should also be willing to acknowledge when such indulgences take us into troubling or simply boring waters so as to map said waters. QT has often ingeniously positioned himself ahead of criticism. To view his early films with scrutiny and sincerity is to be a prude who’s immune to the sheer adrenaline rush of sensation that they offer.

And make no mistake: Reservoir Dogs and Pulp Fiction are carefully cultivated in terms of fetishism and momentous juxtaposition of foreplay (via dialogue) and orgasm (via violence). Tarantino is a distinctively, theatrically threadbare stylist who knew how to spin his limitations early in his career to his ultimate advantage. The filmmaker is certainly aware of the aforementioned dissonances and disturbances; that’s partially the point, as these films are less without a paradoxical patina of safely controlled outrage.

For all the cinephiliac references that abound in Reservoir Dogs, there’s a figure of inspiration to Tarantino that’s been acknowledged but underestimated: David Lynch. Tarantino’s early films take Lynch’s totemic pop-art aesthetic and dilute its political and psychological undertow, replacing it with attitude. The most infamous scene in Reservoir Dogs, its Thanksgiving centerpiece of violation, is when Mr. Blonde tortures Marvin Nash (Kirk Baltz), a cop whom the gang has taken hostage. Blonde slices off Marvin’s ear with a glistening straight razor, which he pulls out of an immaculately macho cowboy boot, while Stealers Wheel’s “Stuck in the Middle with You” plays on a cheap stereo in the warehouse. This mixture of atrocity and kitsch is unthinkable without Lynch’s work, particularly the scene in Blue Velvet where Dean Stockwell’s character lip-synchs to Roy Orbison’s “In Dreams.”

There are many differences between these respective scenes. Lynch mines a horrible moment of exploitation and degradation for its nightmarish beauty, as beauty and subjugation are always unresolvedly and ambiguously intertwined for Lynch. By contrast, Tarantino’s glee over Marvin’s torture is reprehensible and embarrassingly infantile: He values the scene for its visceral sensation. Tarantino lingers with faux rapture on a close-up of Marvin as his duct-taped head bleeds as the song plays on and Mr. Blonde dances around with brio. Lynch achieves true rapture though, without shortchanging the painful implications of the images and situations, because rapture requires pain, or emotion, which requires tonal risk.

Reservoir Dogs introduced the core conflict that still runs through Tarantino’s filmography: between sensitivity and inquisitiveness and shock-jocularity. Cumulatively, Tarantino doesn’t have a solely cartoonish relationship with violence. Jackie Brown, Death Proof, and The Hateful Eight abound in violence that’s upsettingly beautiful and cathartic as well as mysterious and socially undigested. Not coincidentally, these are among Tarantino’s least profitable films. Even in Reservoir Dogs, there’s a yearning for something richer than what Tarantino the astute showman knows will “play” to vast audiences.

This yearning is visible in the extraordinary performances of Tim Roth, Harvey Keitel, and Steve Buscemi as the most significant of the quintet of jewel thieves at the center of Reservoir Dogs. These are great and experienced actors, but Tarantino’s rapport with them is astonishing, particularly as a neophyte. For all its problems, Tarantino’s early work has a vitality that’s missing from the more ambitious and preachy epics that have turned the filmmaker into a gory social-issues artist—a hip version of Stanley Kramer. Tarantino now has the power to command vast budgets and fabricate his own realities wholesale, while Reservoir Dogs, Pulp Fiction, and Jackie Brown depend on an element of spontaneous verisimilitude.

Tarantino finds Cassavetes-style poetry in Roth, Keitel, and Buscemi’s craggy, vulnerable, working-class-hero faces, and he captures and encourages gestures that transcend the film’s warring thrill-ride mentality. As Roth’s Mr. Orange dies on a ramp engulfed in his own blood, Keitel’s Mr. White combs his hair back with unmistakably paternal love that renders the final twist of the narrative authentically painful. Betrayed, Mr. White weeps, collapsing into a soundscape of bullet-ridden despair. Tarantino invented a certain kind of disenchanted 1990s-era cool that complemented the rise of bands like Nirvana, but pop culture learned the wrong lessons from him and vice versa. When Tarantino dares to look under the perverted and wounded hood of male ego, his ego, he reveals himself to be a major artist.

Ripley’s Got a Death Drive: David Fincher’s Alien³ at 25