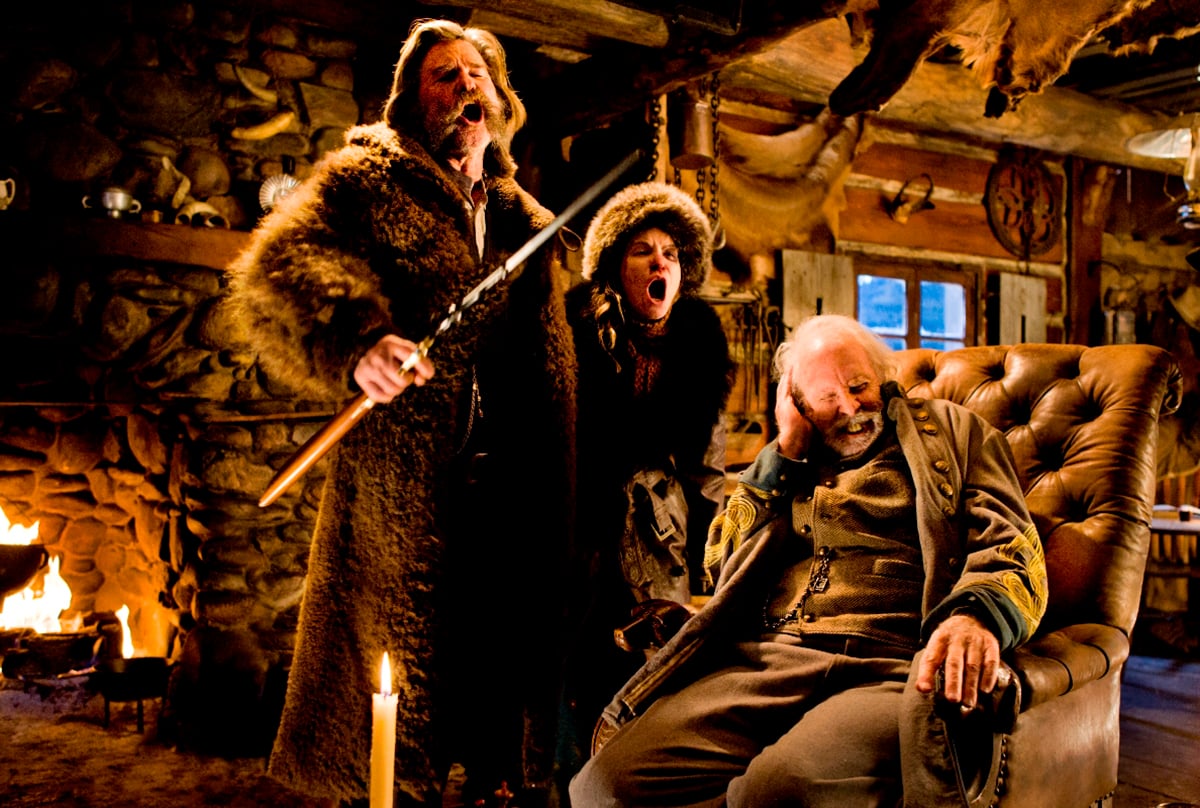 As far back as Reservoir Dogs, one of Quentin Tarantino’s hallmarks was to invest the criminal class with a degree of cool, and, with a showman’s enthusiasm, he encouraged audiences to derive pleasure from the coolness, generating with ease a free-floating vibe of having a good time with story and place and detail. With The Hateful Eight, his second entry in the western genre after Django Unchained, he turns his back on that long tradition. It’s a clean break, not unlike the sea change that occurred with Michael Powell when he made Peeping Tom, or Alfred Hitchcock, with Frenzy. Here, the screen is filled with vermin, utterly lacking in cool, and precious little effort is made to distinguish between those who have the slightest pretense of officialdom and the lower classes of the frozen frontier: assassins, bushwackers, cutthroats, and liars. If it’s found under a rock, it’s a character in The Hateful Eight.

What follows is a string of events that’s often outrageous, sometimes hilarious, but rather than cool or stylish, the film is bleak and severe in the classic tradition of snowbound westerns such as William Wellman’s Track of the Cat and André de Toth’s Day of the Outlaw. The premise of the film is simple, but it’s a simplicity that can only attract complications, as simple plans are apt to do, in an atmosphere of foreboding and the macabre. Bounty hunter John Ruth (Kurt Russell) and his charge, Daisy Domergue (Jennifer Jason Leigh), take refuge from a massive blizzard at the only rest stop outside the city of their destination: Minnie’s Haberdashery, a combination of way station, general store, and all-purpose place to hang around. As we transition from a stagecoach to a stage-like milieu, the haberdashery serves as a Hawksian hangout zone, similar to the compound and living quarters in Hatari! or the Arctic research station in The Thing from Another World.

What John Ruth finds, not necessarily to his great surprise, is that his simple mission has already attracted the wrong kinds of attention six ways from Sunday. Counted among the disparate group that forms around him are two stagecoach companions he reluctantly accepts, Marquis Warren (Samuel L. Jackson) and Sheriff Chris Mannix (Walton Goggins), plus a strange quartet he finds at the way station: Sandy Smithers (Bruce Dern), Oswaldo Mobray (Tim Roth), Joe Gage (Michael Madsen), and Bob (Demian Bichir). With the exception of the stage driver, O.B. Jackson (James Parks), hired by Ruth, every scoundrel in his midst is either lying about something, or seems like they ought to be. In the barren wilderness, he’s found the only ants, and he’s carrying with him a sticky sweet.

Without giving too much away concerning the elaborate series of double-crosses, revelations, and twists that follows the setup, it’s safe enough to say that Tarantino wrote a Tarantino script, dense with repetition, wordplay, and doubling back. Characters will often quote an opponent’s turn of phrase back to them, word-perfect, thus creating, in an ever-deepening quagmire of lies and ulterior motives, tiny islands of agreed-upon facts. Someone may be lying through their teeth, but if their words are echoed, verbatim, a tacit agreement forms that their words, at least, were spoken in the first place.

In accordance with the familiar features of Tarantino’s writing is an even more crucial aspect of The Hateful Eight: the divide that forms between characters who have stories to tell and those who have questions to ask. The storm outside initially provides a kind of facility for the storytellers (or yarn-spinners) because the film often seems to be observe, almost in genuflection, the tradition of “old dark house” movies and plays, the type where stranded souls might take turns telling scary stories. Mounting horrors give rise to the investigator class, although what they achieve starts to have less to do with self-preservation and more to do with containing a malevolence from being allowed to leave the confines of the haberdashery, come the thaw.

It’s a deeply unpleasant film—and, one might argue, purposefully so. Rather than following a clean genealogical path back to Hollywood westerns of the Golden Age, The Hateful Eight often resembles Italian giallo horror, less for that subgenre’s tendency to luxuriate in synth scores and extravagant lighting setups than for its less-celebrated preoccupation with cruelty and pain. As in those extravagant and supernaturally tinged slashers, characters in The Hateful Eight who choose to have any agency apart from maintaining a cover story—for lack of a better term, they’re the “good guys”—find a nebulous reward for forcing fate’s hand.

The pursuit of justice that forgets, in the calamity, what it’s pursuing, and why, is another quality that brings Tarantino’s film closer to the narrative schematics of horror, operating under the guise of the western. Horror maestro Thomas Ligotti praised the godfather of the modern era’s investigator, Raymond Chandler, whose iconic private eye Philip Marlowe pursued fearlessly any line of inquiry, wherever it might take him, even if it meant venturing into the heart of the unknown. The Hateful Eight reaffirms the marriage of the restless searcher and the waiting abomination—the missing genre link between mystery and horror.

The smallest whisper of valor that clings to Marlowe as he trawls the depths of humanity is, for Tarantino, a bridge too far, and in The Hateful Eight he takes great care to stain even his nominal protagonists with lethal flaws. The chief investigator, Marquis Warren, is a bundle of contradictions, exhibiting traits both heroic and despicable, depending on whether you view him through the prism of his checkered past or the volatile present. Indeed, he’s both the rigorous interrogator and, for men who’d tried to hunt him in the frontier abyss, the waiting demon. John Ruth, the only character who not only commands authority, but can also justify it, and with a scintilla of lawfulness, renounces audience sympathy within minutes, when he beats a handcuffed Daisy without provocation, herself only armed with a potty mouth and a prisoner’s natural insolence. After these two paragons, the stranded company doesn’t improve on their meager virtues.

When the gunsmoke clears, we somehow end up with more dead bodies than we had living ones at the start, and The Hateful Eight proves to have quite a lot in common with John Carpenter’s The Thing, apart from having the same lead actor (Russell) and largely identical blizzard conditions: Death emerges from the floorboards, and, following a crisis, an impromptu “court” is established to distinguish between friend and foe. Even the final moments echo the creature classic: Having dispensed justice at long last, two doomed men share a laugh over a great lie, and the camera retreats upward and away from their near-lifeless detente. The haberdashery, by design a sanctuary, has been transformed into a self-cleaning oven, now strewn with an assortment of particulate matter, and we arrive at an unexpected Reservoir Dogs callback: a vetting of moral arithmetic that leaves no survivors.