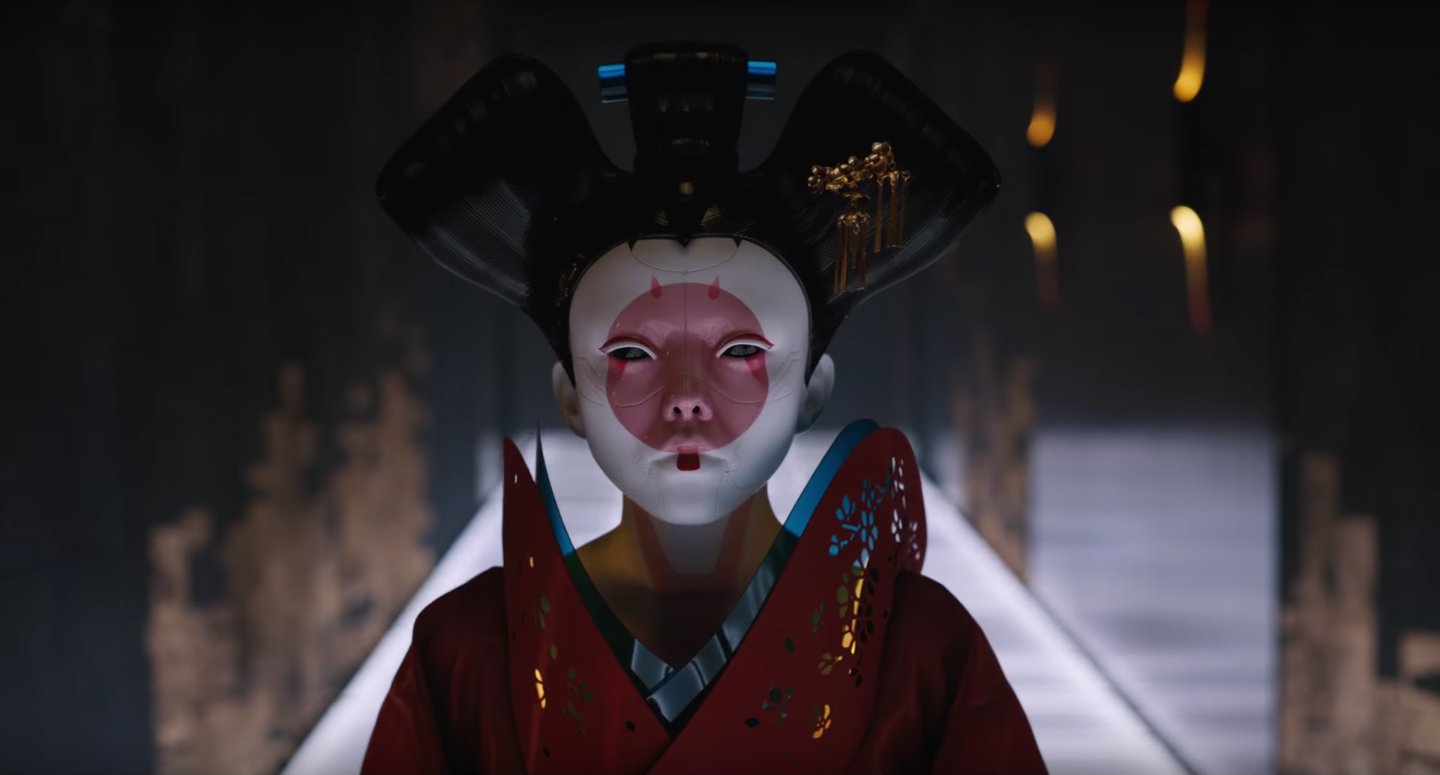 Little about Snow White and the Huntsman, with its lumbering solemnity, stock battle sequences, and fashionably dimmed visual palette, suggested that Rupert Sanders was more than a competent for-hire filmmaker capable of seeing a corporate blockbuster through to its completion. Ghost in the Shell, on the other hand, is a rare breed of tech-minded blockbuster that radically engages with the conditions of the zeitgeist, while also working as a pastiche of notable science-fiction films from the last 35 years, including Mamoru Oshii’s 1995 anime of the same name. If these two components are never quite synthesized into a fully conversant whole, the primary pleasure of the film resides in its awareness of the impossibilities of unity, whether physical or cultural, within a rapidly transforming global milieu.

These anxieties are wired into Major, a.k.a. Mira Killian (Scarlett Johansson), an anti-terrorist “weapon” whose combat abilities extend to hacking the minds of those who wish to bring harm against the state. The state, as it were, is a hyper-corporatized Japan that’s functionally controlled by Hanka Robotics, whose technologies turned Major from a refugee left for dead into a cyborg with a proclivity for swan-diving from high-rises with automatic weapons in tow. In an early scene, Sanders stages the action with a nod to Christopher Nolan’s Dark Knight trilogy, with skyline shots framing Major as a sole avenger amid a festering city rife with crime and the glow of neon lights below suggesting a world of excitement and carnal possibilities.

In 2008’s The Dark Knight especially, Nolan toyed with the notion of Gotham City as a locus for international economic corruption by plugging public fears around the time of the 2007-2008 financial crisis into a subplot involving a self-preserving accountant who flees to Hong Kong with a small fortune. Ghost in the Shell similarly situates a quasi-dystopian Japan within a skeptical, even fearful, framework of globalization’s destructive capacities, to the extent that no character in the film makes direct reference to Japan or any other nation for that matter. It’s as if prior markers of identity no longer have purchase beyond their recognition of the past.

It’s fitting, then, that much of Ghost in the Shell’s aesthetic sensibilities are derived from past genre works, with Blade Runner a major point of reference. Yet the film’s more general sense of narrative purpose relates not to these prior films’ politics, but contemporary conversations concerned with ethnic difference and cultural migration. In fact, the controversy surrounding Johansson’s casting is indirectly addressed by a plot reveal late into the film, which explains Major’s transformation from a Japanese woman named Motoko Kusanagi into a Caucasian shell of vaguely European descent. While the screenplay stops short of fully interrogating these implications, the very fact that Major’s ethnicity becomes the crux of her emotional dilemma transforms Ghost in the Shell into a film about various forms of passing.

Therein lies much of the film’s rich irony: On the one hand, the filmmakers recognize that the demands of a mammoth budgeted, international co-production entail a degree of artistic compromise, and on the other they invite the possibility of textual experimentation. There’s no explanation for why Hanka opts to give its subjects Caucasian bodies other than perhaps the weight of a historical tendency for Eurocentric ideals to stand in as universal norms. At the center of this dilemma stands chief Aramaki (Takeshi Kitano), who speaks Japanese throughout to his entirely English-speaking soldiers. At various points, he speaks Japanese and everyone understands him, despite no suggestion that these other characters are capable of speaking the language back. While the approach certainly provides a short cut around the difficulties of acknowledging language within this multi-cultural landscape, it also speaks to the growing necessity of bilingualism and evolved conceptions of communication within these rapidly shrinking social spheres.

The headiness of Ghost in the Shell exists beyond its more pseudo-philosophical dialogue about the differences between fantasy and reality that often spews from characters’ mouths, with a notable exception being Kuze (Michael Pitt), a cyber-terrorist whose computer-generated speech patterns are played with wild-eyed hilarity by Pitt’s obscure line readings. Johansson, too, for all of the controversy, brings the same intensity of expression to Major as she did to her otherworldly figure in Under the Skin. While Sanders’s storytelling interests hew far more literal than those of Jonathan Glazer, Ghost in the Shell is nevertheless a worthy, brutish entry into contemporary cinema’s burgeoning crop of post-human inquiry.