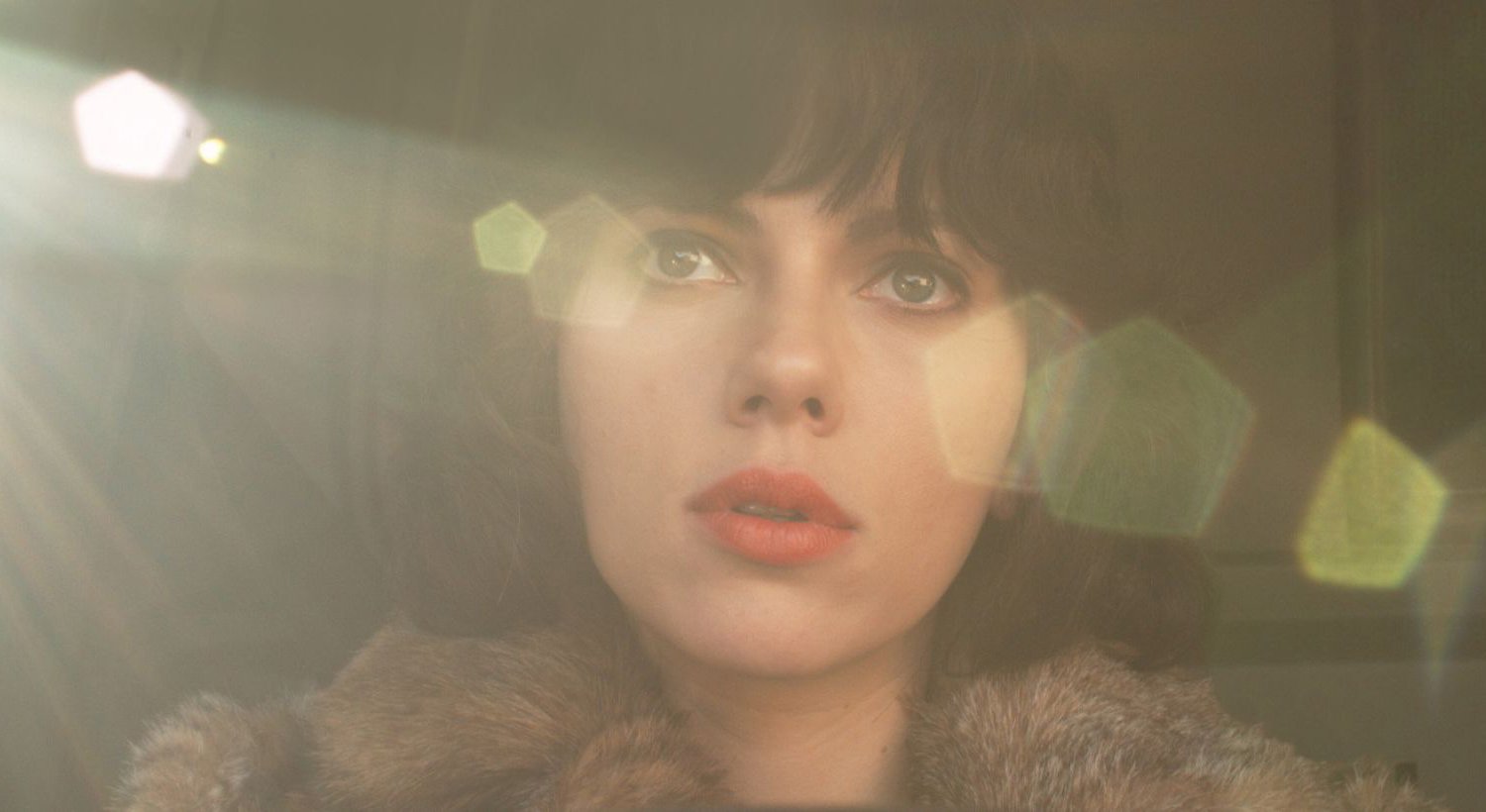 Michel Faber’s 2000 novel Under the Skin doesn’t lack for incident or metaphoric frisson. It tells of an extraterrestrial, Isserley, on assignment in Scotland. Her mission: to cruise the A9 in the Scottish Highlands, near Loch Ness, for the burliest of hitchhikers, who are chemically altered in a processing center before being made into fillets of braised “voddissin” for the snobs on her home planet. It’s science fiction as social satire, a politically pointed attack on battery farming and a reflection on class, humanity, and, above all else, sexual identity. Now it’s been made into a film that, in the hands of Jonathan Glazer, poet of the implausible, is practically an exercise in circumscription. The film doesn’t so much abstract Faber’s ambitions, it willfully shoves them to a place beyond the corners of the frame, conveying through throbbing sound and image a furious sensory experience that mimics what it might be like to view our world through otherworldly eyes.

Glazer, who cut his teeth making commercials and music videos that often likened man to machine and fixated on the musculature of the body, and whose Sexy Beast thugs, like Denis Lavant in UNKLE’s “Rabbit in Your Headlights,” seemed as if they wanted nothing more than to rip their flesh off, clearly found kinship in Faber’s bold articulation of physical displacement and existential unease. In the novel, Isserley is quite literally a construct, her alien body painfully remade to resemble what her victims might want to ravish. But even alien science can only go so far, and most of the men who board her vehicle are struck by her short stature and awkward appearance (thin legs, nonexistent chin, enormous eyeglasses), though they readily take the weird with the humana humana, namely her enormous breasts. And in the first of many perverse, and telling, rewirings of Faber’s text, he casts a perfect though de-glammed beauty, Scarlett Johansson, as his alien praying mantis, renamed Laura for the film.

No longer hitchhikers, but passersby, a revision that works to tighten the story’s hellish grip on audiences by ratcheting up the sense of randomness to Laura’s stalking, the well-muscled men are lured toward deaths that are rendered with a maddening, near-oneiric momentum. In a pitch-black room in a seemingly abandoned building, Laura uses her body as a poisoned carrot, stripping her clothes as she waltzes away from her victims, who drop trou and reveal perfectly erect cocks before sinking into a sticky black nothingness she safely walks over. Auteur of impression, Glazer is uninterested in the nuances of this most dangerous intergalactic game, hinting at conspiracy only in the aide provided to Laura by a shadowy, ever-silent motorcyclist, and that their victims are destined for supermarket aisles on some unknown planet only in the shot of pulverized body parts sliding down a conveyor belt. For Glazer, what truly matters is articulating through visual and aural enticement the unconscious power of our death drive.

This notion is compellingly evinced in Laura being interrupted—by a looming tragedy at sea—as she sizes up a surfer. Eerily and sexily complemented by Mica Levi’s score, a weirdly fetching mix of live and synth strings and percussion that rumbles like the sea’s angry waves, Glazer frames a woman’s pursuit of her drowning dog, the husband’s pursuit of the wife, and the surfer’s pursuit of the husband as a primordial daisy chain of self-destruction. Failing to save the husband, who fails to save the wife, who fails to save the pooch, the surfer rolls onto shore like a dead seal, after which Laura knocks him out with a few blows to the head using a nearby rock. And just as unsettling as the obliviousness that radiates from the men who sink into the horrible blackness of their deaths is the absence of feeling from Laura’s face as she walks toward her van and her motorcyclist cohort scrubs the beach clean of all evidence of their crime—the wailing of the dead man and woman’s baby, stranded alone on the sand, echoing through the night like a war horn.

Given Glazer’s emphasis on sustained notes of audio-visual embellishment, Under the Skin may feel as if it’s coasting on empty style, but that ignores the thorny subtext over which its immaculate surface broods. A montage of shlubs going about their banal lives in Glasgow’s city center as Laura flits about would be condescending if it wasn’t immediately followed by a jarring bird’s-eye view of the alien falling to the ground and being helped to her feet by a group of men. Though she appears oblivious to their kindness, she does flash signs of humanity in her interactions with a twentysomething who only goes to market at night because he has the face of the Elephant Man, and who’s seduced by her seemingly sincere complimenting of his beautiful hands. If this is empathy, embedded in feelings Laura has about her own deformity, then those roots are more clearly revealed in the novel, though they’re unmistakable in the uncertainty, weariness, and frustration with which Johansson trudges through the film’s landscapes.

Glazer has stripped Faber’s story of its metaphorical and satirical ambitions, transforming what was once a “half Baywatch babe, half little old woman” into just another girl next door pretending to understand sex more than she really does. Laura, while no different than Isserley in that she’s aware of her appeal to men, views sexual fulfillment as an abstraction, and when she allows herself to be penetrated by a comforting stranger, her reaction sends her spiraling into an oblivion not unlike that into which she drops her victims. She’s still not of this Earth, but now her alienness is a marker of her naïveté, of a very recognizable sense of estrangement. And in a haunting sojourn through a woodsy gulf between fantasy and reality that’s as bracing as the story’s ellipses, the existentially uprooted Laura seems to understand herself in the way she does her victims, as commodity, and recoils from the horror of her sentience manifesting itself from sexual initiation and, subsequently, degradation. And that, the film articulates through its abstract movie-ness, is no way for a girl to come to understand her body, regardless of what’s under her skin.