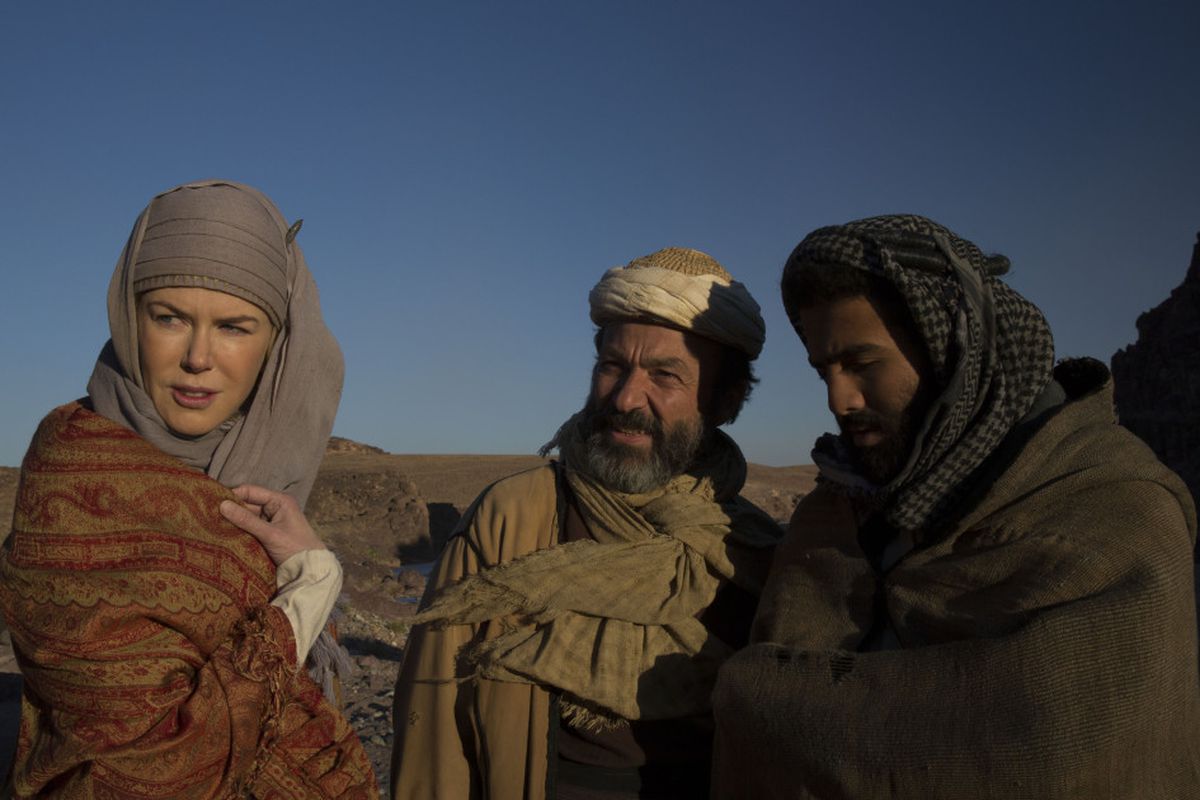 Theoretically, the subject of Queen of the Desert could hardly be more Herzogian in nature. With her passionate spirit of ceaseless adventure, Gertrude Bell—a British writer/archeologist/map-maker who, among her many achievements, played a major role in British imperialist foreign policy—would seem to be a kindred spirit to a director like Werner Herzog, who in both his fiction and nonfiction features exudes a willingness to follow even the nuttiest of protagonists to the ends of the earth and their outer psychological limits. This is, after all, a filmmaker who, during the making of his 1982 epic Fitzcarraldo, famously followed the path of his opera-loving protagonist, created an actual massive boat, and had people lug it over a real mountain in Peru.

Bell, however, isn’t so much mad as she is restless, and to some extent her relative sanity defeats Herzog, who struggles to find much of a point of connection beyond a vague, if occasionally enlivening, sense of breaking free from the stultifying confines of her upper-class existence. Maybe it’s to be expected that the first half hour or so of Queen of the Desert—which details Bell’s (Nicole Kidman) burgeoning love affair with Iranian diplomat Henry Cadogan (James Franco)—is its most stilted and tone-deaf: Herzog seems distinctly uncomfortable in this hemmed-in environment, that lack of confidence extending, to some degree, into a general flatness represented by Franco’s stiff and uncharismatic performance (his shaky British accent certainly doesn’t help his cause).

Matters sadly only marginally improve once Herzog follows Bell into the desert, detailing her various archeological explorations. All the majestic Peter Zeitlinger-lensed desert vistas in the world can’t quite cover up a disappointing sense that Herzog never seems to get much of a handle on Bell’s inner life through all her explorations in the same way he tapped so memorably into the madness of figures like Aguirre and Fitzcarraldo. If anything, Herzog seems to believe that focusing unduly on Bell’s love life is the key to grasping Bell’s essence. By the end of Queen of the Desert, one may well be surprised to learn about how influential she in fact was to British foreign policy, since Herzog lavishes so little attention on her actual achievements. All the film adds up to, unfortunately, is a sweeping romantic epic made with barely any persuasive romantic feeling underpinning it.

Whatever you may have thought of the rest of Alex Ross Perry’s last film, Listen Up Philip, there was little denying the surprising sensitivity and tender depth of feeling during that one detour focusing on the efforts of Philip’s long-time girlfriend, played by Elisabeth Moss, to move on from their breakup with the titular writer-asshole. (Moss’s wide-ranging display of facial emotion in one particular close-up, after she’s thrown Philip out of her apartment and essentially out of her life once and for all, still resonates with me even as the rest of the film has evaporated by comparison.) So perhaps it was natural that, for his follow-up, Perry would make a whole film focused almost entirely on Moss, albeit in much darker emotional circumstances.

Once again, a breakup provides the starting point, but whereas Moss’s character in Listen Up Philip used it as an opportunity to reclaim her life, Catherine, the character the actress plays in Queen of Earth, instead goes on a psychological downward spiral when she finds herself at the receiving end of a brutal breakup at the hands of her longtime boyfriend, James (Kentucker Audley)—this on top of her artist-father’s recent death. Her regression is in part seen through the perspective of her best friend, Virginia (Katherine Waterston), who invites Catherine to her family’s cabin once again and tries, with increasing difficulty, to help her friend through this difficult time. Even her most well-meaning attempts, though, end up mostly revealing how far apart they have drifted since last summer at the same cabin, when Virginia was the one going through personal troubles and Catherine was basking in stability and security. In the end, there’s only so much Virginia can do as Catherine, during the course of their week together, seemingly reverts to a heartbreaking baby-voiced childlike state.

If Listen Up Philip aimed to evoke the sophisticated patina of Woody Allen in its look and feel, Perry does a stylistic 180 in Queen of Earth and draws on the evocatively eerie likes of Stanley Kubrick and Roman Polanski in exploring the fragile states of these two female characters. If anything, he occasionally makes his influences too obvious, from Keegan DeWitt’s overtly Penderecki- and Ligeti-inspired score to its use of a day-of-the-week narrative structure similar to that of The Shining. But the film is pure Perry in its psychological details. Class privilege is, as ever, a force that’s both liberating in the moment, but imprisoning in the long run: It gradually becomes evident that Catherine is so shell-shocked by these personal tragedies because of the too-comfortable bubble she’s built for herself over the years, doing clerical duties for her father while suppressing her own artistic gifts. But though Virginia occasionally evinces a twisted pleasure at seeing her friend brought down this low, Perry isn’t interested in easy criticisms of his characters as he is in exploring the limits of their friendship: the ways camaraderie can curdle into competition, and the extent to which mutual jealousy subsides and pure human empathy takes over—whether or not such empathy is enough to save someone in the end.