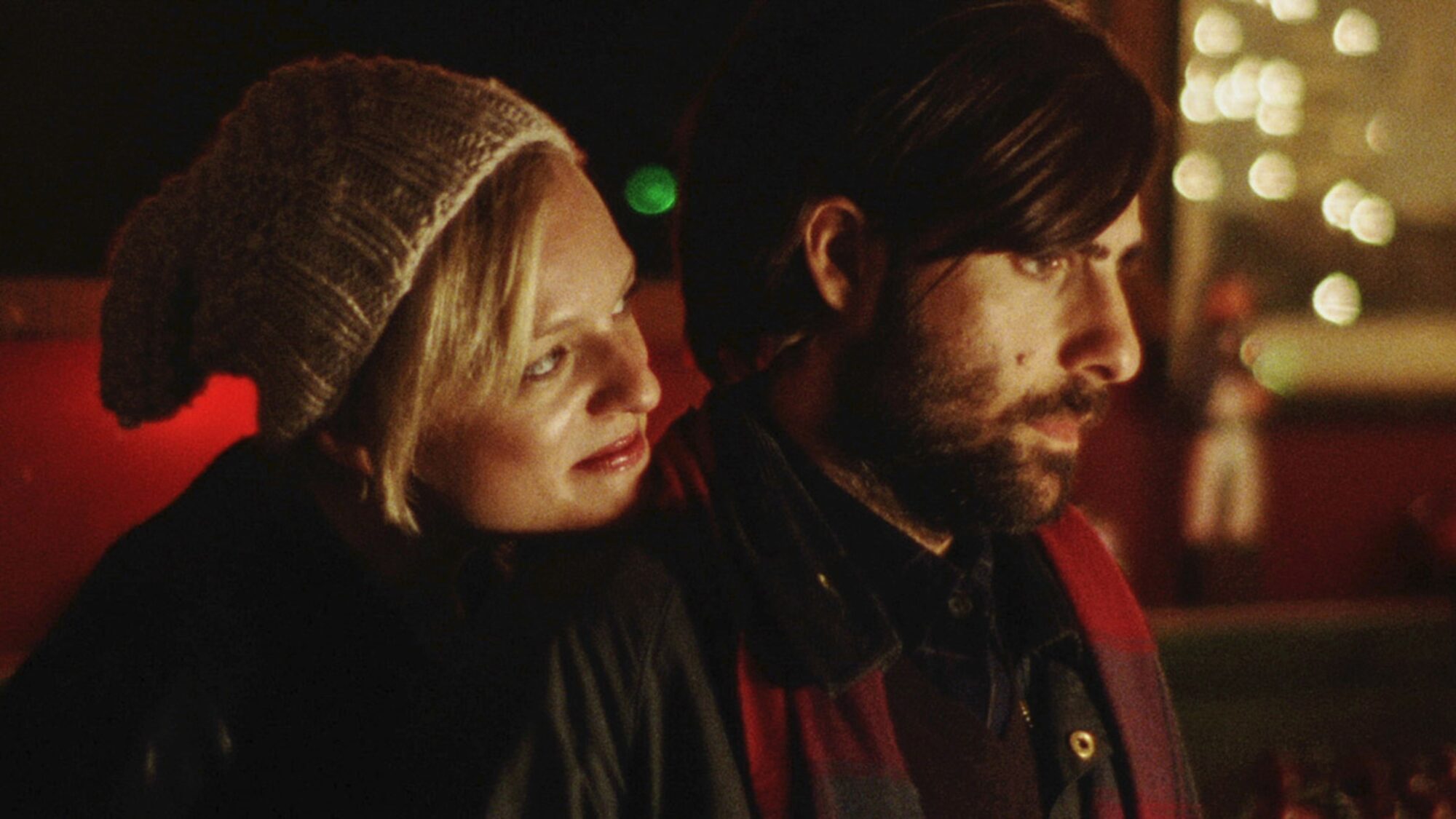 Alex Ross Perry’s Listen Up Philip concerns itself with the literary world only in the sense of names and properties; no sample text from the breakout novel of its antihero, Philip Lewis Friedman (Jason Schwartzman), makes its way into Perry’s dialogue. This mysterious absence seems a structural weakness at first, but later emerges as the tip of the spear in terms of Perry’s satirization of a very specific, bookish Brooklyn milieu. The film isn’t concerned with literature nearly so much as it is success and its discontents. Or, as Philip reprimands one of his ex-girlfriends who casually drops that word, “I’m not ‘successful,’ I’m notable. And I’m not even notable—noteworthy, at best.” Philip’s blinkered obsession with Making It doesn’t make him a relatable hero, but instead becomes the guiding force of the story, shredding his relationship with his photographer girlfriend, Ashley (Elisabeth Moss), who, over the course of the film, learns there’s more to life than being stuck living with Philip’s overbearing, needy narcissism. While Philip retreats into his self-made image, her arc of realization belongs to a happier movie. This is a film you laugh at while you’re watching it, sometimes riotously, sometimes in horror, but its overwhelming melancholy will seep in the more time you spend thinking about it.

It must be said, Schwartzman’s acid-tongued Philip actually has a decent amount in common with Max Fisher; it’s like the vulnerable childhood defense mechanisms of the boy genius from Rushmore have “matured” into an ongoing, all-out war with the world. Viewers will watch in breathless terror every time he strolls into a room, his churning misanthropy instantly freighting the scene with tension. Early in the film, Ashley tells him, “It’s hot, you being mean”—and that’s one of the only affirmations Philip can be satisfied with. Once he comes under the thumb of his writer hero, novelist Ike Zimmerman (Jonathan Pryce), the drama (and thus, the pleasure) is in watching Philip deal for once with somebody he looks up to. Philip and Ike form a clique of two, with Ike’s overtures—inviting Philip to live in his summer home, noxiously charting the growth of his fondness for Philip in the vintage of scotch he offers the young author—drifting from a dream come true to utterly creepy and disdainful. Even as he embraces both Philip and his work, Ike seems to be giving him a kind of existential hazing. The germ of their conflict suggests that Philip wants to think of Ike as a contemporary, whereas Ike can only view the younger man as a source of resentment. It’s Pryce’s most sinister on-screen creation in years.

Philip is doomed to be not just disappointed by his idol, of course, but by success (or notability) in all its manifestations. If this is, in an artist’s life, an unsurprising realization, it makes for hot-blooded viewing thanks to Perry’s razor-sharp attenuation to the dynamics of his scenes and their performers. The cast brilliantly manage to pick out the beats (hesitation, confusion, silent persuasion) embedded in the ceaseless pitter-patter of Perry’s meticulously worded, verbally diarrhetic screenplay. Just for Sean Price Williams’s daringly intimate, screen-crushing close-ups, the film adds up to a dizzying experience. By putting this much weight on his characters’ speech (letting it drive the relationships on screen, and thus the narrative), Perry’s is an approach with honestly few contemporaries in American independent film. A quick cut from the speaker’s face to the listener’s can permanently alter what you think of somebody, and it makes Perry’s film all the more gripping for its test of audience sympathies than for some semblance of a plot. A case could be made that Philip ends up in the exact same place as he started, but more so; the tragedy is, he’s just too solipsistic to chase anything else.