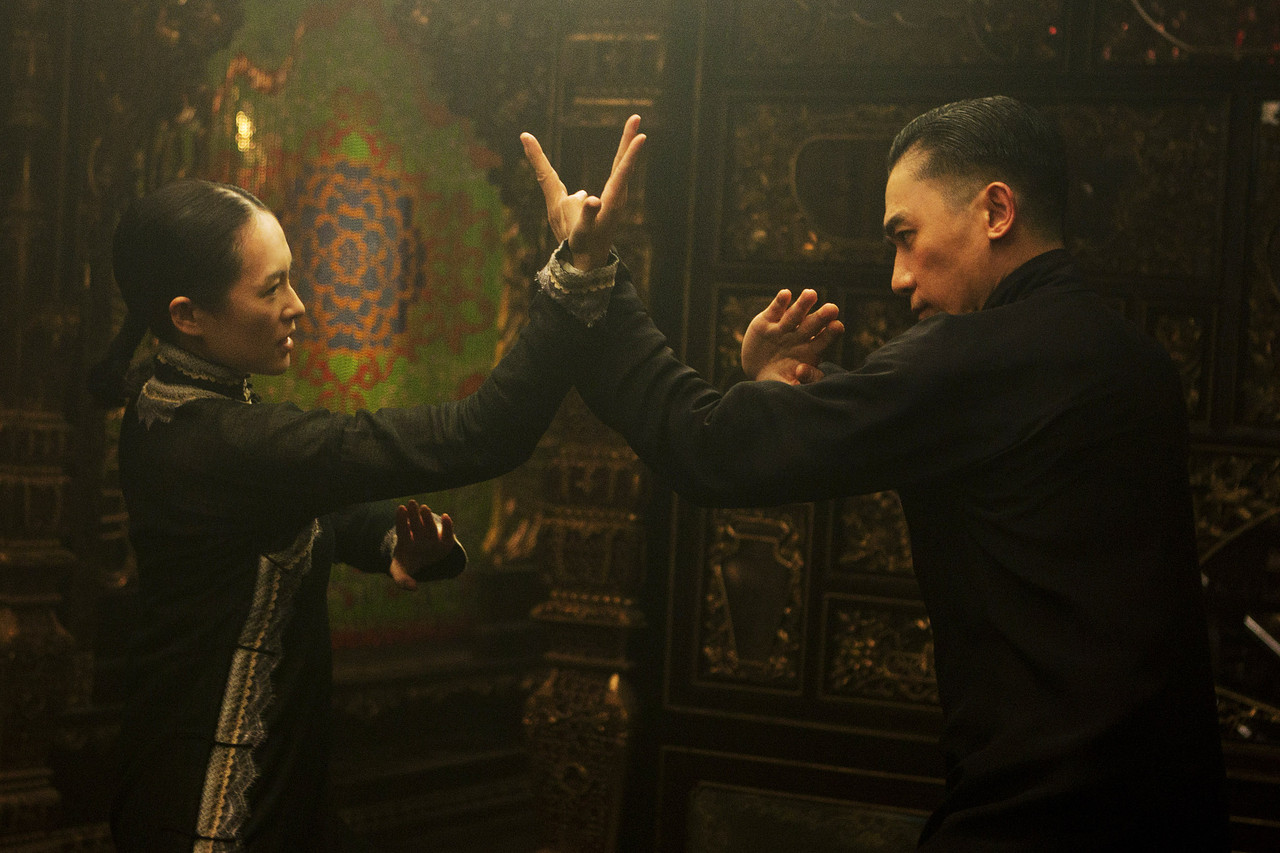 Since coming home from the sumptuous, if lopsided, American road trip of My Blueberry Nights, Wong Kar-wai has been hard at work on his martial-arts epic The Grandmaster. Perhaps the most explicitly in dialogue with film history of all his works thus far, the film will read as a much-needed strike of lightning to wu xia for connoisseurs of the genre and a feature-length TV spot for others. Which is to say that its visual design is (surprise, surprise) magnificently original, but it lacks Wong’s characteristic elliptical approach to storytelling that has won him so many admirers. Pierre Rissient allegedly dismissed Wong as “postcard cinema”—and it hurts to say it, but The Grandmaster might be more impactful as a series of stills than a motion picture.

Set mainly over the course of the 1930s in Foshan, a city in southern China, the film narrates the Ip Man’s (Tony Leung Chiu Wai) rise to prominence as a Wing Chun grandmaster, focusing especially on his brushes with Gong Er (Zhang Ziyi), the daughter of one of the grandmasters from the north. Although they cross paths across many years, Wong forgoes the melancholic romanticization of time we’ve come to expect from him and opts to tell their story in a disappointingly linear fashion, Hollywoodian flashback included. Essentially a biopic wrapped in a kung-fu art film, The Grandmaster’s ambition but feeling of incompletion brings to mind Sam Peckinpah’s analogous probing of national history, mythology, and masculinity.

Whereas Wong has found himself ensnared by his genre of choice, Thomas Arslan has kept a healthy distance from his own: the western. Although it fits neatly into the trek-through-the-west subgenre, Gold oscillates between calm, contemplative sociodrama typical of the Berliner Schule and deadpan action-comedy. Furthermore, it’s almost completely in German. Set in 1898, the film follows a group of German Americans on their daunting expedition through northwestern Canada to the Klondike in search of, yes, gold. Arslan scrutinizes the group’s dynamic as much as its travel and survival tactics. Other than an elderly couple, the travelers are all middle-aged men who seem as desperate from wealth as female companionship. At the center of the group, thus, stands the object of desire: Emily Meyer (Nina Hoss), a divorced German immigrant, working as a housekeeper in Chicago.

The leader of the expedition, Laser (Peter Kurth), quickly proves to be a greedy con artist, leading the group into dangerous, unchartered territory, like the titular character of Kelly Reichardt’s similarly anthropological and meditative western Meek’s Cutoff. Despite the two films’ comparable revision of the genre, Gold evades the lugubrious tone of Reichardt’s film with a twangy guitar score by Dylan Carlson in a similar vein to Neil Young’s for Dead Man. (It’s likely that Arslan had Jim Jarmusch in mind, as Carlson’s drone band, Earth, contributed a track to The Limits of Control.) If the music buoys the film from art-house melancholia, then the final act lets it veer toward classic cowboy-movie terrain. After the penultimate male survivor of the trip steps into a bear trap and suffers a fatal wound, a romance emerges, complete with hotel-room stays and ghost-town hold-’em-ups.

Films about the not-so-great outdoors pervade this year’s festival. There’s even a second film in the competition in which a bear trap determines the fate of the protagonists. Set in rural Quebec, Vic + Flo Saw a Bear, the new film by Denis Côté, charts the downfall of the eponymous lesbian couple as a few townsmen, deciding that Victoria is ill-equipped to care for her paraplegic uncle, bring him from her home to the hospital. Crippled by its focus on small-town quirk, the film plays like an unfunny Fargo directed by Jared Hess. A more assured provincial tragedy, set in the West Virginian Appalachians but shot in British Columbia, is David M. Rosenthal’s A Single Shot. Sam Rockwell stars as John Moon, a trailer-dwelling hunter who runs into trouble with local ruffians when he accidentally shoots a young woman and finds beside her body a suitcase full of cash. The Southern accents feel a bit misplaced (the source novel was set in upstate New York), but Rockwell and Jeffrey Wright, playing Moon’s equally desperate, alcoholic best friend, wring poetry out of the dialect. William H. Macy also dazzles as Daggard Pick, the overeager lawyer who functions as the corrupt town sheriff. The film’s real strength, though, isn’t its cast members, but the script that surely attracted them to the project. The simplicity of the narrative elevates A Single Shot from a hackneyed woodlands thriller to an Aristotelian tragedy tailor-made for our age of recession.