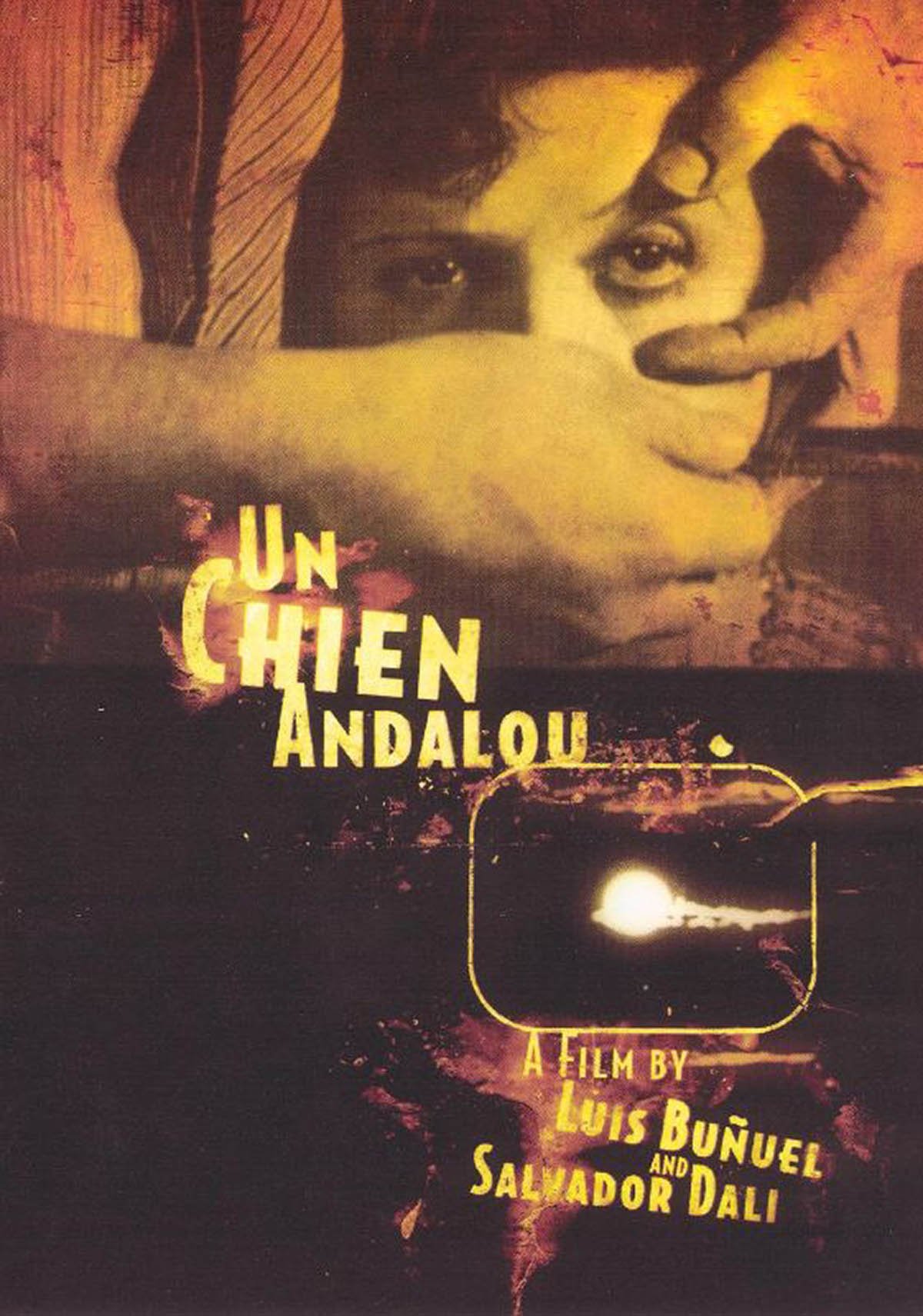 Luis Buñuel spent the early 1920s at the Residencia de Estudiantes in Madrid, an institution that came to be recognized for the creative fertility of its residents. It was at the student residence where several members of La Generacion del 27 first met and Buñuel lived with friends Salvador Dalí and Federico Garcia Lorca. 1929’s Un Chien Andalou, a collaboration between Buñuel and Dali, may be the most outrageous debut by a master filmmaker. “Can there be any spectacle more terrible than the sight of a cloud obscuring the moon at its full? The prologue can hardly have one indifferent. It tells us that in this film we must see with a different eye,” said director Jean Vigo (L’Atalante) of Un Chien Andalou in his 1930 review of the film for Vers un Cinéma Social. With Vigo’s words in mind, it’s easy to see why some think the film signals the birth of cinema.

The juxtaposition of visual, audio, and theoretical associations is immediately jarring in the film’s nefarious “once upon a time” prologue. First, the opening chords of a romantic tango (though originally silent, Un Chien Andalou’s famous images would later be cued to Richard Wagner’s “Liebestod” from the opera “Tristan und Isolde”). A man, perhaps a barber (Buñuel himself), smokes a cigarette while sharpening the blade of a razor. He steps onto a balcony and stares at an unobscured moon before prying open woman’s eyelid. A cloud slides across the face of the moon as Buñuel’s razor cuts into the woman’s eye. (Though an actual calf’s eye was used, as noted by critic Roger Ebert, “legend has transformed it into a pig.”) A confrontational Buñuel demands that we look at the world with what Vigo calls “a new set of eyes.” Stop looking and you are coward.

“Un Chien Andalou was born of the encounter between my dreams and Dali’s,” said Buñuel in his autobiography. The film represents the purest form of autonomy in cinema. It is the quintessential surrealist primer and, not until Michelangelo Antonioni’s L’Avventura, would a film so blazingly lead the way for a new cinematic language. Buñuel has said that Un Chien Andalou was the result of conscious automatism. And while it can be read as a mechanism analogous to a dream, the film itself is less a dream than an abstraction of a dream filtered through the logic of reality. Surrealists, at least the more successful ones, understand that they must disassociate their craft from that which is unreal, at least up until a certain point. (Indeed, would a film like Mulholland Drive mean anything if its heroine never woke up?).

If a dream is a system of accumulated symbols, it must be interpreted using logic culled from what is real. Though Un Chien Andalou is a rich composite of symbols, Buñuel refuses to allow his symbols to speak for themselves. This may place a heavy burden on the spectator, but surrealism, if anything, has come to represent a challenge to passive representations of truth with its violence against symbols and reality. “Surrealist cinema draws its inspiration less from the dominant conventions of the Hollywood text than from the free-form impetus of other expressive media, most notably poetry and painting in the era of high Modernism,” says scholar Philip Drummond in his article “Surrealism and Un Chien Andalou.”

Looking at Buñuel’s autobiography and Dali’s verbal art is to confirm that many of the film’s images were a product of a shared consciousness. (Both men were born and raised in rural Spain and went on to become anti-clerical and pro-anarchist.) Still, one need only look at recurring images from their later works, not to mention incidents from their youth, to find individual authorship in any of the film’s ideographic signs. Buñuel’s fascination with Eisenstein’s Battleship Potemkin (in which a woman’s eye is savaged by a sabre) would explain Un Chien Andalou’s razor-to-the-eye sequence. Dali was an anatomical surrealist fond of animal imagery. Consequently, one can connect the image of ants crawling on a man’s hand to a five-year-old Dali having discovered ants crawling over the dead carcass of his pet bat. Ants would keep turning up in Dali’s later, more necrophiliac work.

Buñuel discovered death in the town of Calanda. There, dead donkeys were a common sight. They’d rot away on the town’s streets, their decaying flesh an open course for vultures and dogs. The town’s citizens left the corpses untouched, believing that decaying flesh would nourish the land. “I stood there hypnotized, sensing that beyond this rotten carcass lay some obscure metaphysical significance,” remembers Buñuel. In Un Chien Andalou, a man rubs his hands around a woman’s breasts, picturing her naked form until his face slowly changes into a mask of death. The film’s images are as confrontational as the film’s intertextual narrative, which happened to share a broad relationship with other popular genres from the time. The film is many things: romance, comedy, tragicomedy, melodrama. In the end, though, it doesn’t so much refuse classification as much as it refuses to cater to romantic ideals.

Though the film’s nameless woman retains power throughout, it is the nameless man who exceeds what Drummond calls “the normal bounds of characterization.” If Un Chien Andalou can be taken as a commentary on the elusiveness of desire it should be noted that a pessimistic Buñuel purposefully and maniacally thwarts that desire. The dying leap the man’s alter ego makes from bedroom to park suggests that he remains as sexually frustrated in death as he does in life. And if Buñuel and Dali afford little room for love, a scene depicting a secondary character’s death seems to provoke bourgeois sensibility. An androgynous woman tends to a severed hand, placing it in a mysterious box before being run down by a car. Taking a respite from their otherwise frivolous sex game, the nameless man and woman stare out a window, finding a kind of passive pleasure in someone else’s death.

Un Chien Andalou more than confirms Buñuel’s voluptuous obsession with sin, his infatuation with the link between sex and death and Catholicism’s anti-pleasure crusades. After lusting for the woman, the man must simultaneously drag a piano, a pair of dead donkeys, and two priests across a room. Just as Jesus bore the burden of humanity when forced to carry a cross to Mount Cavalry (an image literalized in Buñuel and Dali’s next collaboration, L’Age d’Or), the man in Un Chien Andalou suffers both for the sin of lust and for what Vigo calls “our pathetic sentimentality.” More importantly, the man struggles with the weight of Buñuel’s sentimental past.

Having seen Un Chien Andalou projected a number of times, I can’t say that it’s ever looked as good as it does on this DVD edition by Transflux Films, which is impressive considering the film is older than my grandmother. The final shot of the buried lovers is still difficult to see (probably a problem with the original negative), but the goo that pours out of the woman’s eye is clearer than ever. (There is a one second video glitch toward the end of the film, but I can’t confirm if this is a disc error on my copy or if it will appear on all copies of the film.) The music Buñuel later added to the film in 1960 sounds primitive. Though no attempt has been made to remaster the track, Buñuel probably would have had it no other way. Chances are that Buñuel would have considered a remastered track entirely too bourgeois.

Buñuel’s son Juan-Luis discusses his father’s life before Un Chien Andalou on the featurette “A Slice of Buñuel.” Stranger than the black-and-white recreation footage used in spots are some of Juan-Luis’s recollections, which seem to have been lifted straight from The Last Sigh, which makes sense, I suppose, since he wasn’t born until five years after Un Chien Andalou was released. Post-Andalou, Juan-Luis clearly got all the gossip about his father’s life firsthand, because the anecdotes about the demise of Buñuel and Dali’s relationship and Buñuel’s unfortunate encounter with a Christmas tree at Charlie Chaplin’s house are insane. Also included here is a graphic design and statement by Dave McKean, an abridged transcript of a speech given by Buñuel in 1953, and an audio commentary by surrealist expert Stephen Barber, author of Antonin Artaud: Blows and Bombs, who out of respect to either the surrealist tradition or Buñuel and Dali’s insistence that Un Chien Andalou’s images not be interpreted, analyses the film rather generally, focusing mainly on the film’s radical montage.

Seventeen minutes that forever changed the face of cinema, Un Chien Andalou finally makes it to DVD on this nice Transflux Films release.