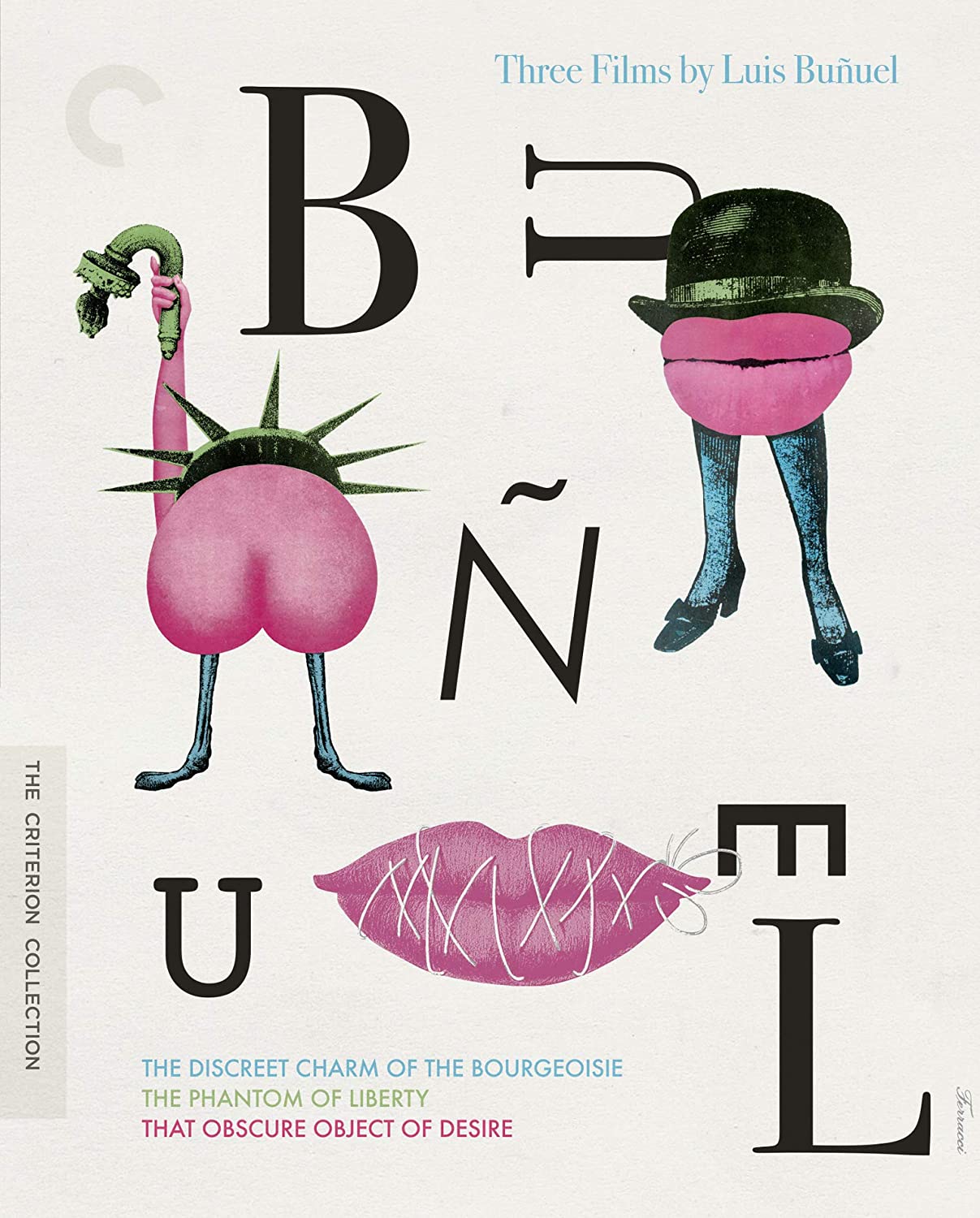 Luis Buñuel’s The Discreet Charm of the Bourgeoisie is arguably the Spanish surrealist’s most accessible late-period masterwork, consistently amusing in its champagne-dry wit, even if it’s never quite as trenchant in its autopsy of bourgeois complacency as his final directorial effort, That Obscure Object of Desire. Buñuel and screenwriter Jean-Claude Carrière supply the film’s characters (played by a veritable rogues’ gallery of French arthouse stars) with an inexhaustible menu of absurd situations to overcome if they ever hope to complete their quixotic quest: assemble in one place, at the same time, over a common repast. Terrorist plots, police raids, the military on maneuvers—everything conspires to work against them. Frustration and disruption prove their native condition. Consider this peripatetic posse, wandering aimlessly down the road to nowhere, six characters in search of a decent meal.

Simmering away just beneath the parlor comedy of Buñuel’s Oscar-winning triumph is a somber work that nods toward horror, though the film’s characters are haunted not by the fugitive phantoms of liberty, but by gory specters of murder, betrayal, even police brutality. What’s more, The Discreet Charm of the Bourgeoisie is quite possibly Buñuel’s most violent film. We aren’t exactly in the graphic realm of Sam Peckinpah, but one abruptly murderous act in particular still retains its ability to shock, especially given its almost offhand casualness.

Buñuel’s emphasis on the implacable dream logic that drives The Discreet Charm of the Bourgeoisie’s storyline isn’t what you would call unprecedented. His films have often incorporated dream imagery, leavening even the most melodramatic material with outbursts of oneiric intensity. But only a handful of them, namely those collected in this Criterion set, almost entirely abandon traditional storytelling, allowing their networked narratives to tumble into, even interrupt, one another with perfect impunity. Dreams nest within other dreams like so many Chinese puzzle boxes, and no dream belongs exclusively to a single dreamer, as though Buñuel were toying with the Jungian notion of the collective unconscious.

Buñuel’s penultimate film, The Phantom of Liberty, boasts one of his most subversive narratives, eschewing linearity for a garden-of-forking-paths approach that keeps wandering away from matters at hand in order to investigate the lives of its minor characters. Also, this is one of his funniest films, its segments overflowing with slap-happy statuary, gambling monks, naked piano players, and assless chaps. Don’t be fooled, though, by all the surface hilarity. At bottom, the wily Buñuel and Carrière aim to go gunning for the most dangerous game: the specter of human freedom (hence the title, an oblique nod to The Communist Manifesto).

At first glance, That Obscure Object of Desire looks like a more straightforward prospect than the labyrinthine narrative digressions that characterize Buñuel’s late masterworks, what with its outrageous yet cogently delineated account of a May-December amour fou. The film’s most obvious conceit—casting two very different actresses (an icy Carole Bouquet and a hot-blooded Angela Molina) in the role of the titular object of desire, Conchita—is a lark that owes as much to expedience as it does to caprice, as the first choice for the role didn’t pan out. Buñuel otherwise seems content to confine the film’s most surreal moments to the margins, beginning with the sack that aging libertine Mathieu (Fernando Rey) sometimes hauls around with him. The risibly misogynistic dialogue that encourages the audience to equate women with the excrement-filled burlap turns out to be something of a red herring. Only in the film’s final moments do we actually discover what’s in the bag: someone’s tattered trousseau.

That Obscure Object of Desire splits its time between Seville and Paris, much as it splits its female protagonist in two. The decision to polarize Conchita into French and Spanish personae reveals a definite ambivalence about elements within both cultures, especially those tending toward extremism, a skeptical relativism that crops up in Buñuel’s later works, most egregiously in The Phantom of Liberty’s opening segment. This episode, a parodic gloss on Goya’s The Third of May 1808, casts a cold eye on both French tyranny (Napoleon’s sacrilegious troops) and Spanish zealotry (ranks of executed monks). The terrorism that haunts the film does more than simply literalize the hoary cliché about the battle of the sexes; it puts the purview of the purely personal into perspective against a history of pervasive violence that, at least in theory, the surrealists themselves once applauded.

“The simplest surrealist act,” André Breton wrote in the Second Manifesto, “is walking into a crowd with a loaded gun and firing at random.” Buñuel knew well enough, of course, that actual violence solves nothing, perpetuating endless cycles of retribution and further violence. He didn’t confine his critique to politically oriented groups that were active at the time (like Germany’s Red Army Faction), which is patently obvious when you consider the name of the terrorist organization that bombs the shopping arcade at the end of That Obscure Object of Desire: the Revolutionary Army of the Infant Jesus. Just when Mathieu and Conchita start up their lovers’ quarrel again, a bomb explodes across the final frames. Buñuel certainly didn’t have many points in common with the Christian philosopher Blaise Pascal, but he surely would have agreed with Pascal’s notion that extremities eventually coincide.

As Carrière has pointed out in the past, the entirety of Buñuel’s oeuvre can be said to occupy the space between two of cinema’s most striking images: the sliced-open eyeball that announces “the shock of the new” in Un Chien Andalou and the mended, yet still bloodied, bridal lace seen near the end of That Obscure Object of Desire. Far from being “all sewn up,” however, Buñuel’s cinematic legacy continues to blast apart the routinization of the status quo. His films maintain the power to inflame filmgoers still passionate about indulging their imaginations, encountering along the way things mysterious and outré, in an era that seems ever more inclined to empty spectacle and easy answers.

These “new high-definition digital restorations of all three films” look excellent overall, with bright, densely saturated colors and well-maintained grain levels. Only That Obscure Object of Desire had been available previously on Blu-ray from Lionsgate in 2013, and this transfer improves upon that one by several notches. The French LPCM mono tracks sufficiently carry dialogue and what infrequent bursts of mostly classical music occur on the soundtracks. That Obscure Object of Desire also features an English-language dub, but it’s presented in lossy Dolby Digital and also isn’t very well synched to the image.

This set provides a bumper crop of supplements across three discs. The first disc offers some excellent overview materials, namely “Speaking of Buñuel,” a terrific feature-length documentary about the filmmaker’s life and work, and “The Castaway of Providence Street,” a charming homage to Buñuel from Mexican directors Arturo Ripstein and Rafael Castanedo, which includes a recipe for his famous Buñueloni cocktail. Other offerings are more film-specific: “Once Upon a Time: The Discreet Charm of the Bourgeoisie” is an intriguing making-of program from 2011 that dives deep into the sociopolitical context of the film, and a shorter making-of doc from 1972 allows members of the cast to reflect on their work with Buñuel.

The second disc is a little lighter on extras but does feature a thorough analysis of The Phantom of Liberty in a 2017 video essay by film scholar Peter William Evans. There’s also a half-hour program from 1985 that focuses on producer Serge Silberman’s career working with Buñuel on seven films, as well as collaborating with other filmmakers like Akira Kurosawa and Nagisa Oshima. There are also interviews with actors Jean-Claude Brialy and Michel Piccoli.

A lengthy introduction to That Obscure Object of Desire from screenwriter Jean-Claude Carrière, carried over from Criterion’s 2001 DVD, is a highlight of disc three. Also ported from the earlier release are excerpts from Jacques de Baroncelli’s 1929 silent film La Femme et le Pantin, a version of the same source material. “Lady Doubles” provides interviews with Angela Molina and Carole Bouquet, who discuss the casting process and their different working relationships with Buñuel, who was polite and somewhat distant with Bouquet, yet reputedly got on famously with countrywoman Molina. “Portrait of an Impatient Filmmaker” provides cinematographer Richard and assistant director Pierre Lary with an opportunity to discuss their experiences working under the punctilious Buñuel, in particular the early days of the shoot when Maria Schneider still had the lead role. “Remembering Buñuel” is a thoroughly enjoyable roundtable conversation about the director that includes contributions from Silberman, Carrière, and actors Muni, Piccoli, Julien Bertheau, and Fernando Rey. The enclosed booklet contains essays by critic Adrian Martin and novelist and critic Gary Indiana, along with interviews with Buñuel by critics José de la Colina and Tomás Pérez Turrent.

Criterion gathers together three of Luis Buñuel’s late-period masterworks, proving that time hasn’t dimmed their ability to provoke and confound.