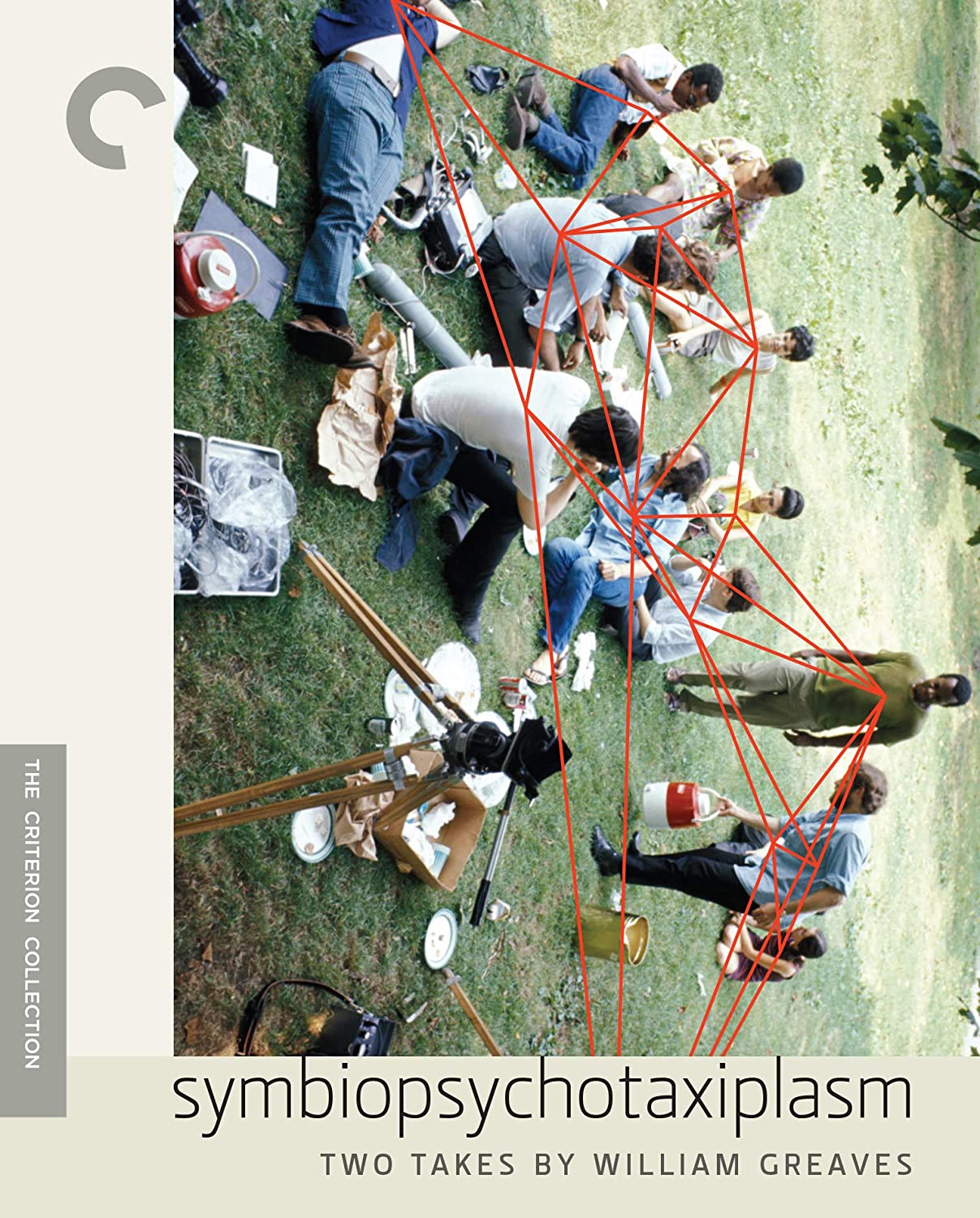 William Greaves’s 1968 meta-documentary Symbiopsychotaxiplasm pushes cinema verité to a breaking point. Ostensibly an account of members of the Actors Studio rehearsing in Central Park, the film swiftly establishes its avant-garde approach to capturing reality. Using three separate camera crews, Greaves collects significant coverage of a given scene. For instance, in an early argument between two actors, in character, a traditional shot-reverse-shot setup is filmed simultaneously, and each shot is placed side by side in the frame. Insert shots appear to capture bystanders looking on in discomfort as the pair bicker about sex, but off-screen directions suggest that they may be actual actors in the production.

Inspired by Heisenberg’s uncertainty principle, Greaves uses the film less as an attempt at realism than a portrait of how even the most unguarded moments in life are on some level shaped by observation. This is made as unmistakably plain as possible when Greaves must obtain the permission of passersby to appear on camera and shows shooting permits to amused cops. Arguably, the most real observations are of people waiting around impatiently as Greaves and his crew attend to these legal necessities, arms folded and faces stricken with boredom. If anything, the film is an active parody of the concept of verité, with each crew given a watching-the-watchmen task that forces the camera operators to film each other as much as the actors or park patrons. Greaves himself even plays an exaggerated character, using sexist and domineering remarks to dial up the chauvinistic, egoistic nature of a director.

Throughout, technical difficulties like unfocused shots and microphone feedback or intrusive natural sounds add to the overall sense of verisimilitude, as well as deepening the impression of Greaves as an officious but incompetent filmmaker. Numerous scenes of the crew assembling Symbiopsychotaxiplasm in the editing bay find them arguing over Greaves’s methods, and their criticisms seem to be equally split between scrutiny of his in-character behavior and the actual film’s dizzying thesis. Everyone slowly starts to go a little screwy from keeping track of all of the film’s layers of self-awareness, and the actors amusingly recalibrate from the building confusion by falling back on reciting the kind of classical, stage-trained monologues that the film-within-the-film seeks to break down in favor of more spontaneous performances. The rehearsals are for a caustic story about sexual identity, yet in the end the in-character explosions over a wife accusing her husband of being gay come to feel less antic and dramatic than the constant behind-the-scenes kvetching over how to play the material.

Little seen upon its release, Symbiopsychotaxiplasm would go on to attract considerable audiences decades later, when it would become a cause célèbre among filmmakers like Steve Buscemi and Steven Soderbergh, both of whom helped to fund a much-belated sequel released in 2005. A mixture of outtakes of the first film and newly recorded material with members of the original cast, Take 2 1⁄2 naturally expands the already dizzying levels of metatextual awareness of Greaves’s concept. Greaves shoots on DV, exploiting the format’s then-primitive technology to test its various limitations and potential. Actively incorporating footage of Greaves presenting the first film at festivals and symposia and conducting interviews related to its revival even as he builds on it, Take 2 1⁄2 is a fascinating riff informed as much by how much its predecessor shaped other films as its own core narratives and devices.

The influence of Symbiopsychotaxiplasm is evident in Soderbergh’s process-oriented works, Brian De Palma’s more narratively oriented deployment of its extratextual techniques, and the outwardly spiraling autocritique of Abbas Kiarostami’s Koker trilogy. Yet Greaves’s project is singular in its power, for the way it wryly foregrounds filmic falsity while also providing glimpses of true insight into people’s behaviors. This is perhaps most evident at the end of the first film, in which a local homeless man intrudes upon its shooting. At last, the tables are turned on Greaves, presenting someone who affects the crews as much as the crews affect pedestrians. As the actors and cameramen become genuinely annoyed by the man’s rants, his uncontrollable energy presents a scenario in which the presence of cameras seems to do nothing to change the demeanor of a man who speaks as if no one were there.

The textures of the 16mm and digital photography are beautifully preserved in Criterion’s transfer. Thick grain is present in the 1968 footage, and the transfer doesn’t attempt to remove all of the scratches and debris that serve as further reminders of the barriers that filmmaking presents to true reality. The DV imagery of the second film is every big as clear as you might expect; smeared textures and visible compression abound but are endemic to the source. Both films look completely faithful to their respective image formats. Sound is crisp on both films, with dialogue clear even when ambient sounds build to roars around the cast and crew.

Discovering William Greaves is the most significant extra here. The hour-long documentary from 2006 provides an overview of Greaves’s career, attempting to build on the boost that he received with the re-release of Symbiopsychotaxiplasm and its sequel. An additional interview with Steve Buscemi details his infatuation with the first film and his efforts to secure funding for Take 2 1⁄2. A booklet essay by Amy Taubin explores Greaves’s career and the impact of Symbiopsychotaxiplasm, while a collection of production notes from his journal reveal the considerable thought that shaped these superficially improvised works.

William Greaves’s anti-verité Symbiopsychotaxiplasm has lost none of its power over five decades, and the Criterion Collection offers an excellent high-def presentation of the film and its sequel that’s true to their source materials.