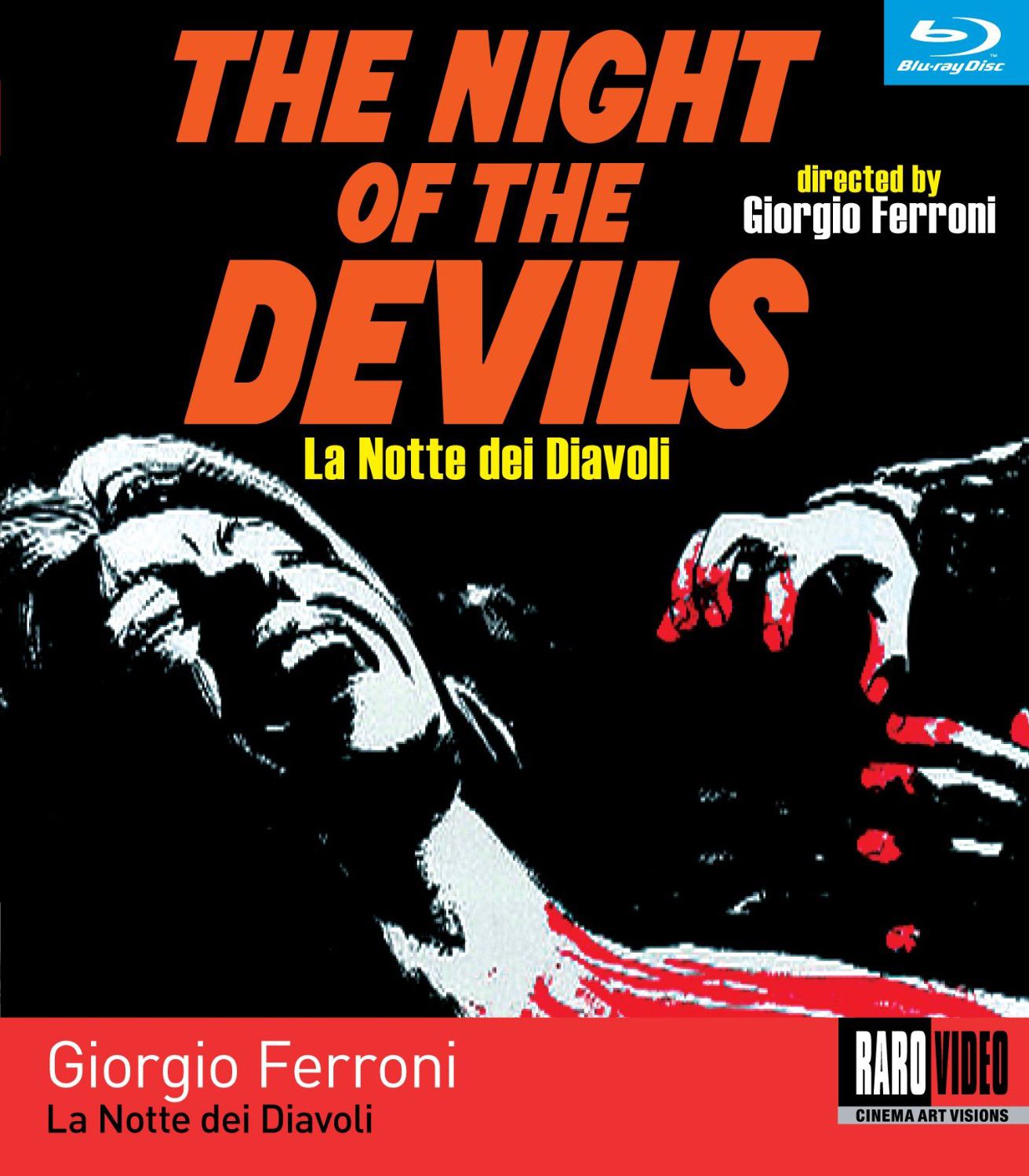 Less well-regarded than his compatriot Mario Bava, director Giorgio Ferroni nonetheless was responsible for helming a pair of excellent Italian horror films. In fact, the two directors’ careers intersected in some interesting ways. In the same year that Bava came out with Black Sunday, his classic of monochrome menace, Giorgio Ferroni released Mill of the Stone Women, an atmospheric work in lurid color that blended the gothic flavor of Hammer films like The Horror of Dracula with elements drawn from George Franju’s surgical shocker Eyes Without a Face. What’s more, Ferroni’s 1972 vampire film The Night of the Devils is an adaptation of the same Alexei Tolstoy story that served as the basis for “The Wurdalak” episode in Bava’s 1963 anthology film Black Sabbath.

While both versions retain the outline, at least in its broad strokes, of Tolstoy’s disturbing account of a family besieged by the revenants of loved ones turned bloodthirsty vampires, considerable differences in surface detail and thematic nuance are certainly suggestive of the filmmakers’ very different sensibilities. In keeping with the gothic provenance of Tolstoy’s tale, Bava extracts a timeless fairy-tale quality from the material. Consequently, he plays up the rampant artificiality of the episode’s mise-en-scène: blatantly theatrical sets, bestrewn with banks of dry-ice fog, garishly illuminated by purple and green gel lights. Eschewing the fairy-tale mode, Ferroni instead complicates the source material’s linear simplicity by surrounding it with a destabilizing frame narrative that casts doubt on the protagonist’s very sanity. Ferroni sets his sordid saga against a more naturalistic and modernized background, emphasizing the temporal disjunction between the modernity of the frame narrative with its hospitals and automobiles and the backwoods setting’s anachronistic 1800s ambience.

The disorienting introductory sequence opens with a man, soon identified as Nicola (Gianni Garko), stumbling through remote wooded terrain until he finally collapses in exhaustion along a riverbank. Entering a kind of fugue state, he witnesses graphic visions of sex and violence: a disembodied feminine torso hovers in the void, awaiting the caresses of anonymous hands; a beautiful woman’s face suffers grotesque disfigurement by an unseen force. These images are intercut with shots of medical X-rays and a straightjacket-bound Nicola lying strapped into a hospital bed. By these hallucinatory means, Ferroni establishes what radical psychotherapist R.D. Laing would have called “ontological insecurity” (consciousness plagued by rupture and discontinuity) as the basis for the long flashback in which Nicola relives his horrific experiences among the Ciuvelak clan.

When his car breaks down in the middle of nowhere, itinerant lumber salesman Nicola tracks down the nearest inhabitants for assistance; it happens to be the extended family presided over by patriarch Gorca Ciuvelak (William Vanders). Nicola is instantly attracted to Gorca’s daughter Sdenka (Agostina Belli), the same woman from the opening scenes who mysteriously vanished when she wasn’t permitted to visit Nicola in the hospital. Ferroni cannily undercuts the conventional romantic development between Nicola and Sdenka by introducing this element of doubt and unresolved tension.

One of the major differences between gothic horror and its modern equivalent is the nature of the menace that threatens its protagonists. In the gothic tale, the menace is inevitably an “Other,” often a foreigner or other marginalized type. In modern horror, violence often comes from much closer to home. The genius of Tolstoy’s tale—and doubtless accounting for its popularity as cinematic fodder—is the fact that it straddles the line between an external evil (the Turk Ali Beg in Bava’s version, the vindictive witch in Ferroni’s) and an internal one: The members of Gorca’s family infected with the vampiric plague come in the night for those that remain. Both versions make eerily effective use of a set piece wherein a ghastly child attacks its mother; the amplified violence in Ferroni’s version probably owes more than a passing debt to the trowel murder scene in George A. Romero’s Night of the Living Dead.

The most telling variance between Bava’s film and Ferroni’s can unsurprisingly be found in their approach to the denouement. In the Bava, Sdenka finally succumbs to familial depredation and in turn preys upon Nicola, a hauntingly scorched-earth kind of ending. Ferroni leaves Sdenka’s “condition” unresolved until the film’s final seconds. After the reveal, he pans away to an open furnace, providing an apt objective correlative for Nicola’s infernal predicament. Ultimately, Ferroni’s film embraces a greater degree of ambiguity in its tragically ironic endgame than does Bava’s inexorably bleak finale.

Overall, Night of the Devils has an appropriately grungy look, more or less akin to something like Wes Craven’s Last House on the Left, but Raro Video’s 1080p/AVC-encoded Blu-ray transfer leaves room for few complaints. Colors pop (and that’s especially important for those gruesome crimsons), while clarity and fine detail are rendered well. The Blu-ray includes both an Italian- and English-language track. Hands down, the Italian track fares better. The English track has a few wobbles in the score and fails to open up ambient sound effects in the subtle but evocative ways that the Italian track manages.

In his enthusiastic (albeit lousily shot) video introduction, Fangoria editor Chris Alexander puts The Night of the Devils in context, aligning it closer to Mario Bava’s 1960s gothic horror films rather than the rising tide of giallo films that owed a debt to directors like Alfred Hitchcock and Brian De Palma. Composer Giorgio Gaslini discusses his philosophy of composition for film, disavows the term “applied music,” recounts his experience working with Michelangelo Antonioni on La Notte, as well as his contribution to Dario Argento’s Deep Red. Stick around after the interview: Gaslini tickles the ivories with The Night of the Devils’s theme for your delectation. There’s also an illustrated booklet that contains a short essay by Chris Alexander as well as a print interview with Gaslini.

A minor masterpiece of Italian horror, Night of the Devils both harkens back to Mario Bava-based gothic horrors as well as anticipates the gory excesses of latter-day Lucio Fulci. Raro Video provides an excellent Blu-ray transfer and modestly engaging extras.