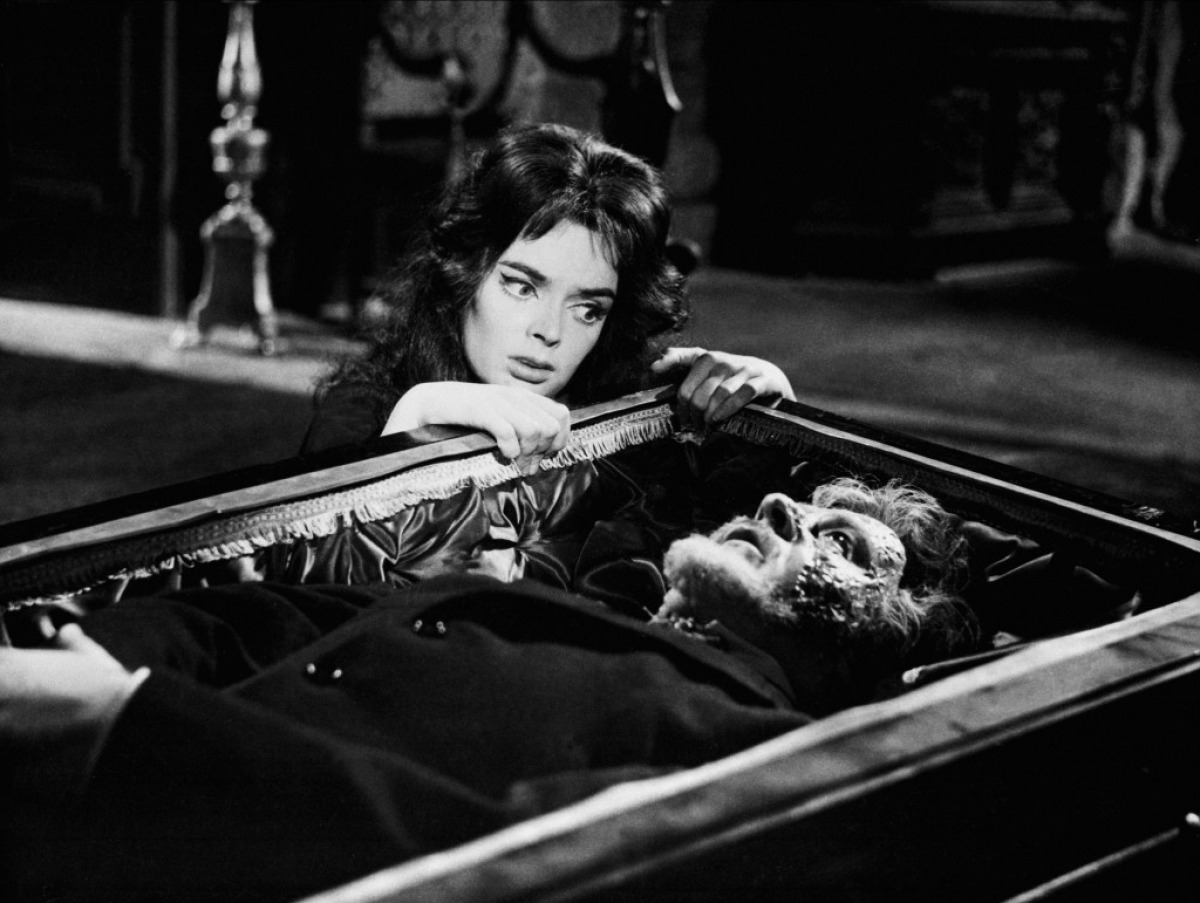 Undisputed maestro of the macabre, Mario Bava put Italian horror cinema on the map in the late 1950s with I Vampiri, the first horror film to come out of Italy since the silent era. Gothic horror was in the air, you might say, in those days: Witness the roughly coeval resurgence of the genre at England’s Hammer Films, with their muscular and bloody take on classic Universal monsters (Curse of Frankenstein, Horror of Dracula), as well as the cycle of gaudily decadent Edgar Allan Poe adaptations helmed by Roger Corman (House of Usher). Unlike those Technicolor terrors, Bava preferred, at least initially, to work in moody monochrome. Drawing on his training in the fine arts, as well as his background working as cinematographer for renowned neorealist filmmakers like Roberto Rossellini and Vittorio De Sica, Bava developed his own inimitable style. Most noticeably, he displayed a marked affinity for economical, and often improvisatory, effects work, especially the exquisitely detailed matte paintings that often help to enrich the pictorial density of his films.

With its gruesome set pieces and all-around visual wizardry, Black Sunday catapulted Bava to the first ranks of international horror auteurs. Loosely based on Nikolai Gogol’s short story Viy, the film is an eminently gothic confabulation of hereditary curses and revenge from beyond the grave; in many ways, it’s also a stylish throwback to the heyday of Universal horror, with high-contrast cinematography and elaborately atmospheric set design. The film brandishes its bona fides at the outset with a pre-credits witch trial that sees lovely Barbara Steele branded as a heretic and then fitted with a spike-lined mask that a muscle-bound executioner hammers home with a giant mallet. Bava conspires to pass the camera through the eye of the mask as it’s brought forth before cutting to the close-up money shot when the hammer comes down. With its bravura conflation of dazzle and disgust, this sequence pretty much epitomizes the Italian approach to the genre. Elsewhere, Bava’s endlessly roving camera slinks through ruined crypts and prowls vast ancestral halls, at one point executing a vertiginous 360-degree pan around a tenebrous burial vault. Black Sunday is equally notable for inaugurating Barbara Steele’s reign as the preeminent 1960s scream queen. In her role as the undead enchantress Asa Vajda, Steele exhibits an uncanny blend of uninhibited sensuality and grotesque morbidity, a witch’s brew made all the more intoxicating by having her also portray Asa’s descendant, and intended victim, Katia.

Anticipating American Psycho’s preening, deceptively charming protagonist by several decades, Hatchet for the Honeymoon puts viewers in the headspace of homicidal fashion house proprietor John Harrington (an intense, nuanced turn from Stephen Forsyth). As it happens, John Harrington has a bit of a problem: In order to unlock a traumatic childhood memory, he has to ritualistically slaughter young women in bridal veils with a meat cleaver. (Incidentally, the opening stalk-and-slash on board a train surely must have influenced George A. Romero’s likeminded Martin.) Harrington takes several of his victims to his “special place,” a cavernous storeroom populated with eerily lifelike mannequins, which gives Bava the opportunity to really get some mileage out of his walleyed anamorphic lenses. Working once again in giallo mode, a subgenre he more or less single-handedly pioneered with The Girl Who Knew Too Much, Bava takes the reins as his own cinematographer this time out, crafting a full-color frightfest that also craftily builds in a few nods to Hitchcock’s Psycho. Shot through with a sizeable vein of black humor, Hatchet for the Honeymoon nonetheless takes a third-act turn into spook-story territory, a development that might easily signal the film’s devolution into Tales from the Crypt-style morality play were it not handled with such mordant wit and visual panache.

Lisa and the Devil is easily the oddest duck in Bava’s filmography, sumptuously photographed and exceedingly surreal. Wandering the labyrinthine streets of Toledo, Spain, tourist Lisa Reiner (Elke Sommer) initially glimpses her own personal, bald-pated devil (Telly Savalas) depicted in a medieval fresco. Lisa will repeatedly encounter this figure, first as the mysterious stranger in a nearby storefront negotiating for a strangely fateful music box, and later as the servant Leandro, butler at the secluded villa inhabited by a blind countess (Alida Valli) and her misfit son (Alessio Orano). Having eventually assembled his players in an isolated locale, Bava proceeds to pick the guests off in a variety of ways, a scenario bearing more than a passing resemblance to Agatha Christie’s Ten Little Indians, as will Bava’s later proto-slasher Twitch of the Death Nerve. Yet events unfold with their own perverse dream logic, more akin to a decadent novel than a drawing-room mystery, replete with a bewildering assembly of wax figure doppelgangers, disquieting suggestions of necrophilia, and sudden and brutal violence. The film’s finale is one of the most gorgeous and bizarre scenes Bava ever filmed: Lisa awakens in a derelict villa overgrown by tangled profusions of vegetation and teeming with animal life. But is she really awake yet? Watch the ending as often as you like, you may never be certain. Probably the less said the better about producer Alfredo Leone’s mercenary reedit of Lisa and the Devil into The House of Exorcism, an unrepentant cash-in on the popularity of The Exorcist, complete with gratuitous profanity and split-pea spewing.

Mario Bava’s Black Sunday, Hatchet for the Honeymoon, and Lisa and the Devil are now available on Blu-ray from Kino Lorber.