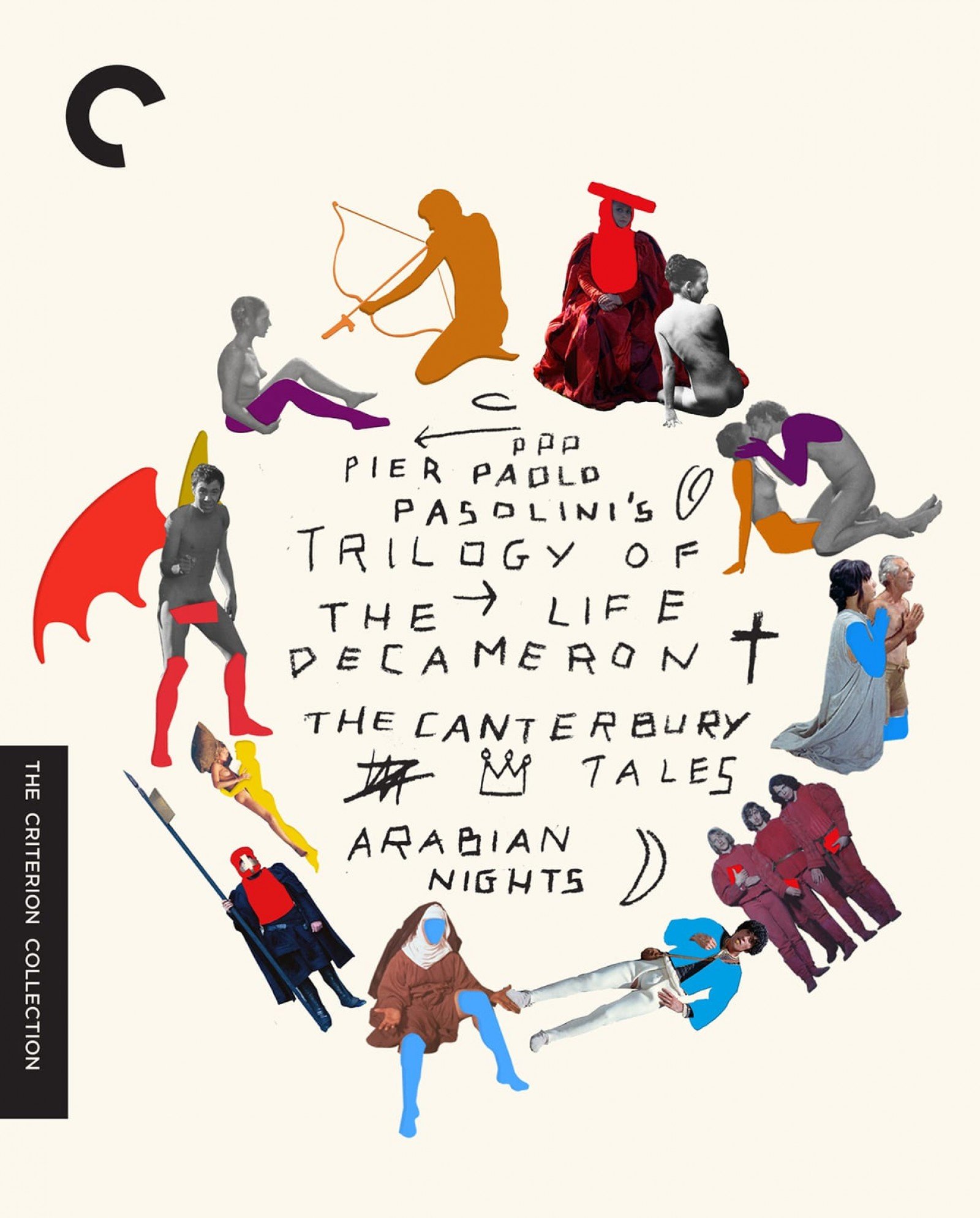 The title of Pier Paolo Pasolini’s “Trilogy of Life” at first feels like a misnomer. Adapting a choice selection of medieval Eurasian parables and myths by way of three canonical source texts, the films present an entourage of goonish characters who, through simple actions that produce equally simply reactions, stumble into prurience, misfortune, and blind luck. As each tale receives only a few moments of screen time, there’s little opportunity to sustain drama or delve into interior conflict; the men and women in this colorful feudal simulacrum instead exhibit only the basest and most naïve of aspirations, most commonly for some kind of wealth. To that end, the graves of dead pontiffs are looted, the wives and daughters of neighbors are seduced, slumbering princes are stabbed, and priests performing last rites are deceived into taking hopeless sinners for holy saints. These aren’t the riches of sober waking life, but of coarse dreams, and Pasolini in turn directs his actors as though staging tableaux vivants, achieving a tone of numinous somnolence even when characters slay and screw one another.

Nothing, in other words, could be less life-like, and yet a “Trilogy of Life” isn’t the same as a Trilogy of Realism. Pasolini ignores the complexity of human psychology even more fastidiously than the authors of his source materials do, but he’s no less acutely aware of the perverse caprice of society: the day-to-day flexibility by which sinners become saints and slaves becomes masters. And the film cycle, insofar as it provides room for the agency of the individual within this arbitrary flexibility, is a polemic. In short, this isn’t “life” so much as Pasolini’s argument for living, a manifesto juxtaposing crude impulse with inescapable destiny, and animalistic anomie with Christian benevolence. And to those who believe that the corporeal and the spiritual are as hopelessly incompatible with one another as free will and predestination, Pasolini offers miracles that intertwine all four. In the most entertaining of these moral magic tricks, an itinerant mute stud blesses a convent full of yearningly virginal nuns with his indefatigable member.

The manner in which Pasolini rewrites the three compendiums at hand is also telling. He flips the voice of Boccaccio’s Decameron from stuffy, standardized Tuscan to vulgar Neapolitan, he expurgates Chaucer’s crucial pilgrimage frame story, and he performs a Caesarian section on the endlessly impregnated epics-within-epics of 1,001 Nights, sweeping up narrative fetuses with blurred linearity. References to visual art, including both medieval paintings and modern films, meanwhile nod to the classic works’ respective legacies. But these revisions, departures, and addenda ultimately update the intentions of Boccaccio, Chaucer, and the anonymous authors of the 1,001 Nights by maintaining focus on vernacular expressivity rather than on story: Just as The Decameron and The Canterbury Tales argued that the vulgate could be as poetic as Latin, Pasolini confirms that cinema is the aesthetic equal of literature, painting, and sculpture. The “Trilogy of Life” is thus also a Trilogy of Art (i.e., of that which makes life worth living), which reboots the hard drive of culture, collapsing its cobwebbed ecclesiastical primacies with parataxis. The result is a liberal-art catalogue where a pupil of master painter Giotto (played in The Decameron by Pasolini himself) stands proudly alongside a Chaplin-esque tramp (played in The Canterbury Tales by Ninetto Davoli).

Not only are comedy films and church frescos treated as unlikely brothers here, but Pasolini also alludes to a variety of cinematic tropes to suggest that even within the broad history of the moving image all genres and styles are created equal. The alleyways behind looming, stone fortifications are captured with handheld shots reminiscent of documentary; slapstick routines are subjected to the quickened frame rates of Keystone Cops films. The costume designs of peasants and priests aim at verisimilitude, but hell is populated by sloppily painted devils and a wooden model of Satan that defecates friars through a dilated sphincter. Sex scenes are photographed in static wide shots positioned at taint-level, providing a hardcore porn-like frieze-view of action; sequences of murder, however, are sliced and diced into close-ups of hands, blades, gushing wounds, and desperate faces. Even Pasolini’s past work is acknowledged in the trilogy’s many mud-caked marketplace sequences, which recall Mamma Roma’s open-air groceries.

But this egalitarianism isn’t without limits. As he asserted in several of his essays, Pasolini conceived of art forms as communicative modes just like speech or sex, both of which aren’t coincidentally stressed in his output. So if the “Trilogy of Life” feels less bustling with humanity than it should, given all the fornication and fratricide, it’s because Pasolini’s understanding of cinema as a vibrant language narrows the perspective of individual films to that of a single speaker. His cardboard characters and their silly schemes thus appear to us, like the figures in paintings and poems, as projections of a singular aesthetic voice. Pasolini even casts himself as Chaucer in The Canterbury Tales to clear up any ambiguity in this regard. This is pure auteur beatification, and insofar as it dismisses cinema’s crucially collaborative nature, it’s rather irksome.

But what redeems Pasolini from his arrogance is the uniqueness of his social vision, which celebrates interpersonal manipulation that doesn’t seek to commodify, and piety that doesn’t disavow the pleasures of the flesh. Though they aren’t intended to ignite the imaginations of others, these are fantasy films. And their most noble implication, finally, is that all dreams are best dreamt at 24 frames per second.

Though seemingly laissez-faire as far as shot composition goes at times, Pier Paolo Pasolini’s work in the 1970s, much of it photographed by Tonino Delli Colli, is some of his most perversely sumptuous. Gaudy religious golds and purples are juxtaposed with pale flesh, black mud, and tan wood, deepening the schism between man and the god(s) he has created. Clean compartmentalization of color is the most obvious advantage to Criterion’s 1080p transfers of the “Trilogy of Life”; the orange hair of a flying demon and the red skin of a horned devil can feel like an assault. The medium-sized film grain is also beautifully reflected in a manner that suggests visual atomization on par with the narrative atomization at work. There are few faults, aside from some cheesy blue-screen effects that look drawn from inferior prints. The sound mix is also quite clear, and the English language dub of The Canterbury Tales is a terrific audio supplement.

The “Trilogy of Life” constitutes some of Pasolini’s most intellectually dense and tonally dissonant work, so I’m quite thankful for the two scholarly visual essays included on The Decameron and Arabian Nights; they accessibly explicate how Pasolini adapts the language of his source material and engages with classical painting and music to bring his themes to life. The documentaries on the films and on Pasolini’s philosophies are less rewarding, as they focus on production anecdotes and material excised from the trilogy’s final running time, or find the director regurgitating thoughts he articulated more clearly in essays. Another documentary, “The Form of the City,” bemoans the ruination of antiquarian municipal engineering by consumerism; it quite terrifically suggests that cities themselves are artworks just like films or paintings. Criterion’s thick booklet insert has a number of helpful pieces as well, most of all Pasolini’s own public renunciation of the trilogy. Given that I’d gladly trade all three films for any single scene from Salò, I see where he’s coming from.