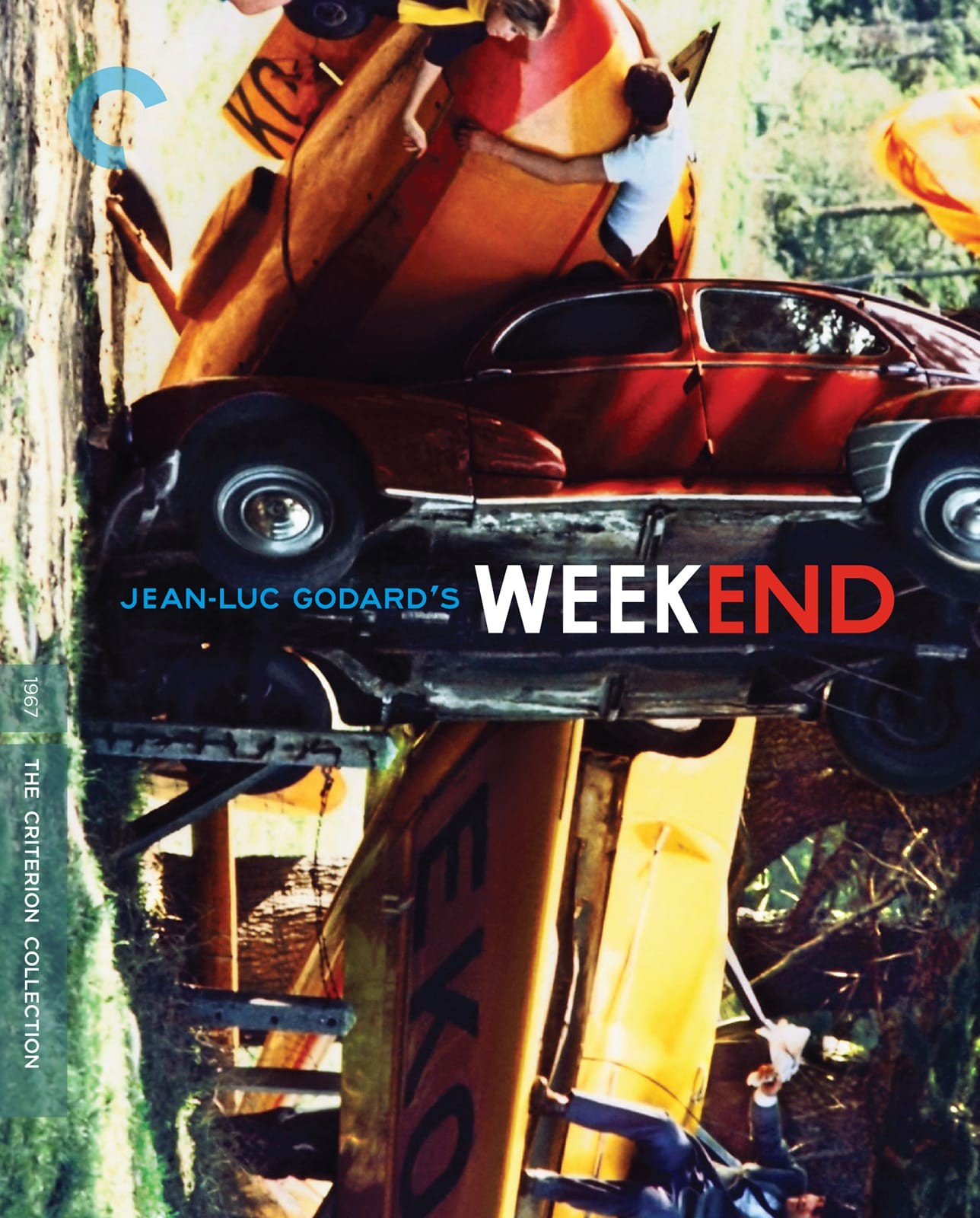 The convenient and widely accepted narrativization of Jean-Luc Godard’s career plants him firmly, by 1967, at a kind of breaking point of aesthetic and intellectual exhaustion. In another year’s time he’d be producing oblique agitprop antagonisms outside of the system; in two he’d be liberating his craft from the strictures of conventional filmmaking practice altogether, rejecting the petite-bourgeois affectations of narrative and drama in favor of hyperpolitical obscurantism; and by 1970 he was producing documentaries for the Arab League on the subject of Palestinian persecution, dedicated only to ideological saber-rattling. And so it’s difficult to remember that Weekend, the last remotely traditional narrative feature he’d produce until the release of Every Man for Himself, in 1980, isn’t the film of a man at the end of his artistic rope, but rather of a man intent on taking a match to it. Weekend is, above all else, an angry film, perhaps the most vitriolic condemnation of contemporary culture ever penned, an emphatic and resounding fuck-you to late capitalism, consumerism, and the widespread complacency they so readily inspire.

Though in many ways a superficial culmination of Godard’s films to date, Weekend was, at the time of its release, an entirely unprecedented work; nothing in his filmography hinted at the anarchic impulse driving this film. Where the political dimension of 2 or 3 Things I Know About Her seemed informed by a contemplative sensibility rather than an argumentative one, and the explicit Maoism on display in La Chinoise seemed a consequence of intellectual curiosity rather than an earnest dedication to the cause, Weekend resolutely is the attitude it continues to expound; that let-it-burn spirit isn’t observed from a distance so much as it is heartily endorsed, which makes the film Godard’s first true polemic. And of course it has the distinguishing factor of being more battle cry than thought experiment, less mature and less sophisticated than later masterworks like King Lear and Nouvelle Vague, preferring to ram its head against the wall instead of consider challenges and posing questions from a distance. But the sheer audacity of Weekend, propelled by what is essentially a still youthful vigor, is, along with its attendant mistakes, central to the film’s appeal.

Owing perhaps to Godard’s tendency to revise—or sometimes just write—his shooting scripts in the middle of their production, the film has structural issues that make it seem longer than it is. This is especially apparent during the final, somewhat overlong sequence in the woods, which has a meandering quality markedly different from the bulk of the road-movie narrative. When people describe Godard’s pre-’68 films as “jazz-like,” it’s precisely this improvisatory feel that they’re referring to, and it often has the consequence of appearing aimless and unrefined. Godard could certainly self-edit when necessary (both Contempt and A Married Woman are deliberately paced and laser-sharp, befitting their more serious tone), but he also knew the potency of excess. Weekend, much like Pierrot le Fou and even Breathless before it, is virtually defined by its aesthetic and intellectual overflow, its formal cup runneth over with ideas that don’t all work, but don’t all need to. And this is a necessary function of its thesis. As a film attacking the ceaseless consumption of its audience, it only makes sense that Weekend always feeds them more: more images, more colors, more bloodshed. How is the film itself constructed if not as an endless traffic jam, each car bursting at the seams with hostility and impatience, Godard the one free car whizzing past to indignant honking? Weekend, then, isn’t a perfect film, but its imperfections make it a great one.

This sterling new transfer is flawless, no mean feat for a film that’s now 35 years old, without a perceptible scratch or abrasion throughout. Colors, which of course play a major role in the film, are vibrant and deeply saturated, from the reds and blues of the film’s many cars to the motor-oil blacks of its title cards. And the texture of the image, thanks to its liberal dollop of grain, should stand along with Criterion’s Repulsion and Warner’s Citizen Kane Blu-rays as the gold standard for how 35mm should look in high definition. The LPCM soundtrack, meanwhile, proves to be one of the strongest in recent memory. Though this is a modest mix compared to Godard’s more radical work with sound, the fidelity is astonishing: strains of the film’s heavy score cut in imprudently to drown out conversations, the horns of the film’s infamous traffic jam blend together in a symphony of noise, and the delicate sounds of Chopin played in a barnyard on piano have all the space to breathe in the world.

It’s not exactly overflowing with content, but what’s included is essential: a new video essay by Film Comment critic Kent Jones goes some way toward unpacking the film’s wealth of nested literary and cinematic references, illuminating much about Godard’s intentions and better situating the film within a well-established historical (and biographical) context; he even goes so far as to defend, eloquently and persuasively, the tendency of Godard’s cinema to confuse with oblique citations. “On Location” is an archival making-of featurette produced on the set of the film and culled from its original broadcast on French television, and this is more or less of the same caliber as many of the similar archival extras found on Criterion’s other Godard releases; it’s the kind of thing one would have no cause or means to see were it not for its inclusion here, which alone makes it something to savor and celebrate. Three additional interviews, of consistent worth, round out the video supplements (there are also two requisite trailers), and, as is usual for Criterion, the disc is accompanied by a comprehensive booklet, this one featuring two interesting essays and a slew of lovely stills.

A galvanizing tirade against consumer culture and a grand proclamation of the death of cinema, Jean-Luc Godard’s still-revelatory Weekend returns to North American home video as one of the best Blu-rays of the year.