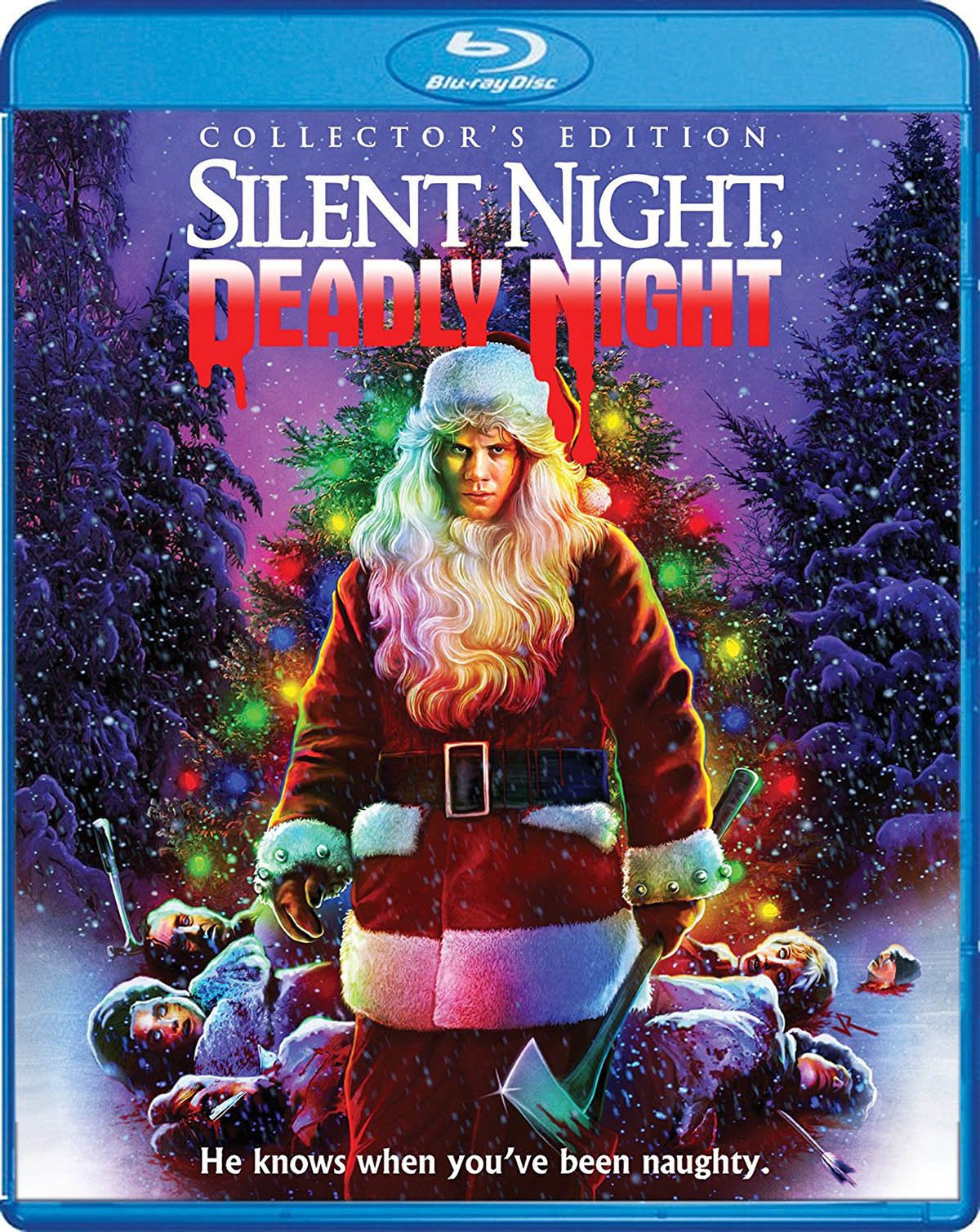 There’s arguably no holiday-themed horror film that comes with as much censorious baggage as Silent Night, Deadly Night. Targeted by parental watchdog groups whose hackles were raised by TriStar’s admittedly ill-advised advertising campaign—TV ads during wholesome fare like Little House on the Prairie, a notorious poster showing an axe-clutching Santa dropping down somebody’s chimney—the film was summarily yanked from theaters barely a week into its limited release. Watching the film today, it’s not always so easy to see what all the fuss was about. Silent Night, Deadly Night is a tolerably well-mounted, often intentionally amusing seasonal shocker that takes an above-average interest in things like character motivation, at least when it comes to the tragic backstory of its serial-killer antagonist.

Said backstory in fact occupies the entire first half of the film. The film takes great pains to trace the etiology of Billy Chapman’s psychosis, even if his specific triggers aren’t likely to turn up in any diagnostic manual. Silent Night, Deadly Night opens with five-year-old Billy (Jonathan Best) having the worst Christmas Eve ever. On an annual pilgrimage to the Utah Mental Facility with his family, Billy’s left alone with his allegedly catatonic grandpa (Will Hare). In one of the film’s most hysterical moments, the old man proves to be playing possum, and regales Billy with the terrifying true nature of Santa’s activities on the night before Christmas, a moral lesson the boy truly takes to heart. Later that night, the Chapman family crosses paths with a less-than-jolly Saint Nick, who’s just robbed and murdered a convenience store clerk, an encounter that leaves Billy and baby brother Ricky a pair of orphans.

Three years later, Billy (Danny Wagner) lives in an orphanage run by a merciless Mother Superior (Liyan Chauvin) with a zero-tolerance policy for malfeasance, and a borderline sadistic credo that runs: “Punishment is absolute; punishment is necessary; punishment is good.” The Michael Hickey screenplay’s caustic take on this unforgiving variety of Catholicism aligns Silent Night, Deadly Night with other slasher films like Alice, Sweet Alice, even if the material does provide a mitigating force for tolerance in the person of kindly Sister Margaret (Gilmer McCormick). Ironically, once the carnage begins, Sister Margaret will keep turning up a little too late to do anybody any good.

Silent Night, Deadly Night subsequently jumps ahead 10 years, introducing 18-year-old Billy (Robert Brian Wilson) as he secures some holiday employment at a toy store run by Mr. Sims (Britt Leach). It’s an ideal location for the ensuing set piece, which functions almost as a little one-act play, charting Billy’s deterioration from eager helper to axe-slinging psycho in a simmering brew of sexual jealousy and alcohol-fueled faux good cheer. The climactic massacre is well-staged, effectively ratcheting up the tension, complete with atmospheric cutaways to creepy dolls and gaping nutcrackers that serve as tongue-in-cheek punctuation to the slaughter.

In a vein similar to the horror-comedy Student Bodies, Billy’s spree involves a wide range of murder implements beyond the aforementioned axe: a string of Christmas tree lights, a bow and arrow, a hammer. There’s also one notorious scene that rather rudely introduces scream queen Linnea Quigley to a pair of trophy antlers. These kills are mostly played for laughs, particularly a doomed downhill sled ride that’s truly jaw-dropping. But, even in the midst of these gags, the film isn’t afraid to disquiet: Witness the fraught exchange between Billy and a little girl (Amy Stuyvesant) who swears she’s been good all year. As a reward, she’s given a blood-encrusted box cutter for a present.

Because Billy obeys a sort of moral code, however dementedly, it’s clear that he’s going to wind up back at the source of so much of his trauma: the orphanage. The final set piece contains the film’s most direct borrowing, a nicely executed jump scare straight out of The Shining, as well as a nasty stinger in the tail suggesting that these cycles of violence and trauma will keep perpetuating themselves. All told, Silent Night, Deadly Night is far from the most reprehensible slasher film ever (barely) released. Taken on its own terms, it’s funny, fairly clever, and, on occasion, even artfully executed.

Shout! Factory’s 4K scan of the theatrical version looks pretty fantastic, a vast improvement over Anchor Bay’s 2014 Blu-ray, not to mention the slew of previous DVD releases. Vibrant color schemes really pop, from the ubiquitous reds of costume and consequent bloodshed, to the multihued Christmas lights adorning nearly every scene. Blacks are deep, and grain levels (apart from a few errant blasts of noise) appear fittingly cinematic. As a title card before the unrated cut warns, this version contains inserted scenes that drop precipitously in quality, resembling at best a second- or third-generation VHS dupe, though Shout! have done what they can to color-match the sources. The Master Audio mono track foregrounds Perry Botkin’s superb electronic score in all its cacophonous glory, as well as the hilarious Christmas-themed songs written by Morgan Ames that are peppered throughout the film.

Shout! stacks up the bonus materials like so many presents under a Christmas tree. Each version of Silent Night, Deadly Night is housed on its own disc with reversible cover art. Apart from the theatrical trailer and some radio and TV spots, the bulk of the extras can be found on the unrated version. Two commentary tracks and making-of documentary all cover similar ground with the expected amount of anecdotal overlap, as well as some amusing amplifications, depending on which version you’re listening to. Discussion touches on the initial story idea and script development process, how the project got taken over by Ira Barmak and sold to TriStar, and the disapproving outcry that accompanied the film’s promotional campaign and initial release from concerned parent groups and certain tetchy film critics (especially Siskel and Ebert calling out by name various individuals involved in the production).

The Q&A with Linnea Quigley was filmed against a splattery backdrop with some shoddy AV equipment that never shifts from a medium longshot: Topics range from shooting the infamous antler-impalement scene to how her family spends Christmas nowadays. The hour-long audio interview with director Charles E. Sellier Jr. plays over a wreath-garlanded still from the film. Discussion of Silent Night, Deadly Night kicks in at about the 15-minute mark and lasts around half an hour: Sellier claims to have improvised the antler scene (an assertion refuted in other extras) and relays an odd anecdote about Quigley being underwear-adverse during the shoot. The text-only “Santa’s Stocking of Outrage” pulls some hyperbolically negative quotes from early press coverage but sadly lacks any of the notorious Siskel and Ebert footage.

DVD Review: The Return of the Living Dead on MGM Home Entertainment