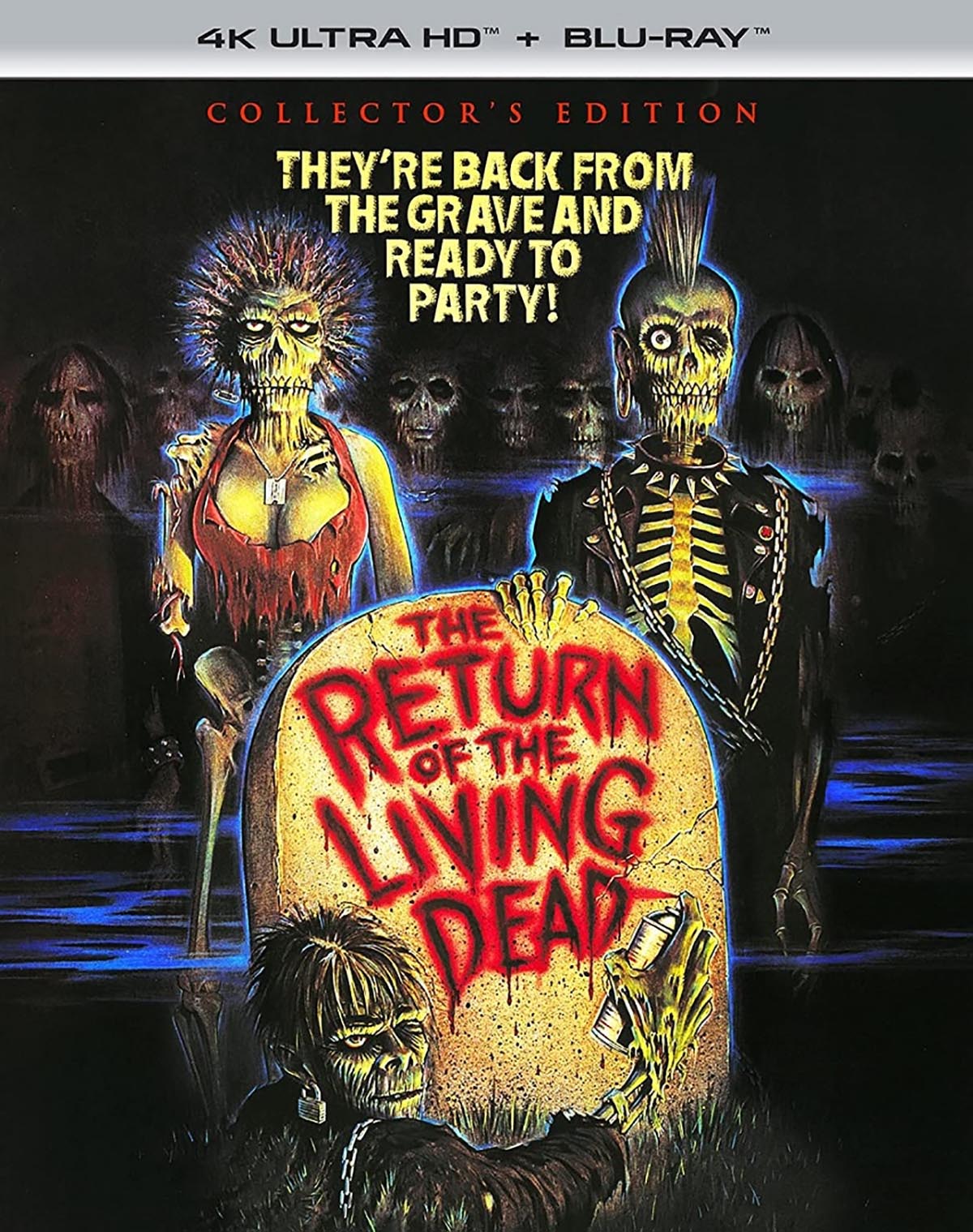 “Not one more preppy!” vowed Dan O’Bannon when talking about the victims from The Return of the Living Dead, his tongue-in-cheek, splatter-laden homage to George A. Romero’s zombie films. Fed up with the Barbie- and Ken-like actors who were getting sliced up wholesale in 1980s fright flicks, the writer-director fills his zombie movie with a group of snarling punk rockers (“What do you think this is, a fucking costume?” grouses one of them, whose studded leather jacket and lip chain define his character, “This is a way of life!”) and West Coast punk music. And that punk attitude, a combination of posturing and self-destructive irony, is a fine match for this most postmodern of zombie movies.

The film opens with one of the punk kids, Freddy (Thom Mathews), trying to clean up his act by getting a job at a warehouse where they store biomedical supplies and a few top secret military canisters that happen to contain the zombies from Romero’s Night of the Living Dead. His boss, Franke (James Karen), is a blue-collar chatterbox who says that Romero’s classic was based on an actual zombie infestation. And to prove it, they go down to the basement, where they accidentally open a canister’s seal and let the creatures out.

Zombie gas spreads over the local cemetery and crematorium, and before you can say, “Fast moving zombies,” our heroes are holed up inside a funeral home fending off the creatures with guns and axes. Bullets to the brain don’t kill them (“But it worked in the movie!”), and the monsters actually talk. One of the running gags of the film is that whenever paramedics or cops show up to provide aid to the victims, they are instantly slaughtered by the undead, who get on the radio and actually say, “Send more paramedics! Send more cops!”

O’Bannon’s filmmaking techniques are simple and resourceful, with the camera often following the actors around the room in medium shot as they volley rapid-fire (and quotable) dialogue off of one another. It’s the zombie movie Howard Hawks never got to make, and frankly it’s less Rio Bravo than His Girl Friday with all the ribald humor on display. And it’s also well acted, with endearing characters from both the punk contingent and the middle-aged office guys.

Linnea Quigley achieves instant B-movie stardom as the punk chick who, in the cemetery, has a brief monologue about how she dreams about old drunken men attacking her and ripping off her clothes before she strips naked and dances around on top of a tombstone. “Aw, man,” says one of her pals, “she’s taking off her clothes again!” Suffice to say, this small offering from the horror genre is a hoot to watch, with never a dull moment.

A brand new 4K scan of The Return of the Living Dead is housed on a UHD disc, sharing room with only the commentary tracks, which allows for a maxed-out bitrate and an image that’s as sharp as one could ever need. The high dynamic range and strong contrast ensures that you won’t miss an iota of detail even in the darker interior scenes or night-time sequences set at the graveyard. And as evinced by Tarman’s melting flesh and Don Calfa’s agitated, sweaty face, skin tones are even and naturalistic and textures incredibly well-defined. The 5.1 surround audio is also nicely balanced, with every squelch and bone crunch coming through loud and clear.

This 4K UHD release is beyond stacked, starting with four audio commentary tracks. The first features authors Gary Smart and Chris Griffiths, the former of whom co-wrote The Complete History of the Return of the Living Dead; the pair discuss their personal relationship to the film while also offering up fun facts, stories, and random trivia about the production. The second track, with actors Thom Mathews, John Philbin, and make-up effects artist Tony Gardner, naturally focuses more on the make-up and effects work in the film, but also includes some choice behind-the-scenes stories, most notably an account of actor Clu Gulager being attacked on set by Dan O’Bannon. Another commentary, featuring O’Bannon and production designer William Stout, digs more into the special effects, the location shooting, and set design, while the final track, featuring Stout and four of the film’s actors, focuses more on the casting and rehearsal process and all of their experiences at fan conventions over the years.

A separate Blu-ray contains the remaining extras, including a two-hour documentary, More Brains: A Return to the Living Dead, that explores the history of the film. Most interesting is the discussion of just how brutal the shoot was and how O’Bannon was signed on to direct after Tobe Hooper dropped out. In a separate interview, O’Bannon opens up about his inexperience on set and how The Return of the Living Dead taught him a thing or two about delegating tasks. Along with these, there are also individual featurettes on the film’s music, effects, set design, locations, its various influences, as well as another that focuses on the two-week rehearsal period and the challenges of mixing several veteran actors with a batch of relatively young newcomers. Lastly, the 107-minute workprint of the film is also tacked on, though its extremely low-grade quality renders it virtually unwatchable for anything beyond research purposes.

It doesn’t take a lot of brains to recognize that this is easily the definitive home video release of Dan O’Bannon’s The Return of the Living Dead.